What we will read in the following is unfortunately real and the (for the time being) last chapter of an EVGA GeForce RTX 3080 FTW3 Ultra Gaming, whose fan control dropouts along with the accompanying howling and black screens we have already experienced and described in the article linked below. It is only logical that the now not so happy owner complained about this card to the manufacturer. What happened in the process, however, probably didn’t. And that is exactly what should be reported on.

EVGA GeForce RTX 3080, RTX 3090 and (not only) New World – when design flaws cause graphics cards to run amok

As a reminder, the following picture shows once again the EVGA shop, where this card is offered by EVGA for around 782 Euro net, which equals around 931 Euro with VAT included. We’ll have to keep that price in mind, because it’s about to play a role. There is no need to discuss about the availability of such cards at the moment, but about the need of those who need this card not only for gaming, but also for working in their home PC. And home office without a graphics card is actually hardly possible. 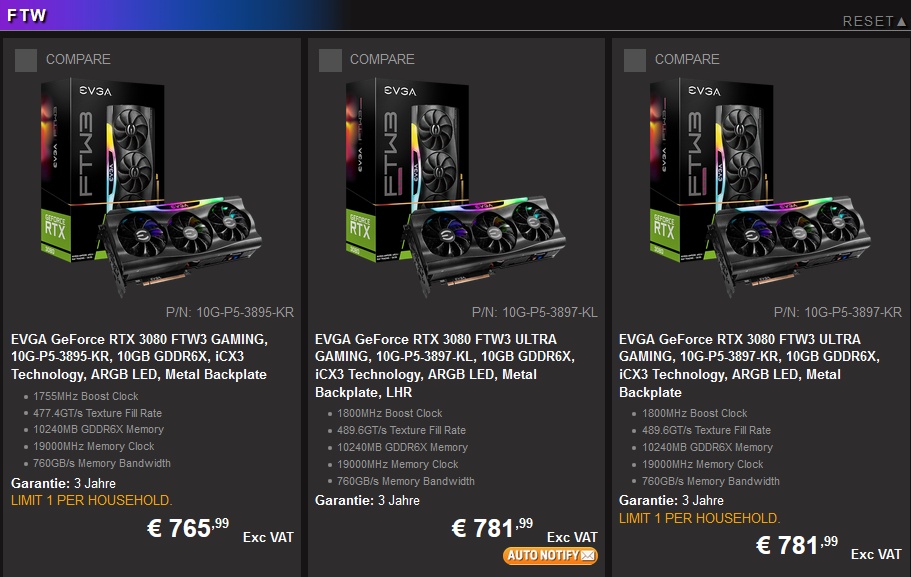 The buyer I’ve been in contact with since this misery began bought this card from Alternate in November 2020. At just under 986 Euros, it was only just above the MSRP from the EVGA shop at the time, so it was actually well in the running for one of the new pixel accelerators. Exactly such an invoice is needed to claim an RMA or maybe even an “Advanced” RMA from EVGA, which EVGA likes to advertise. 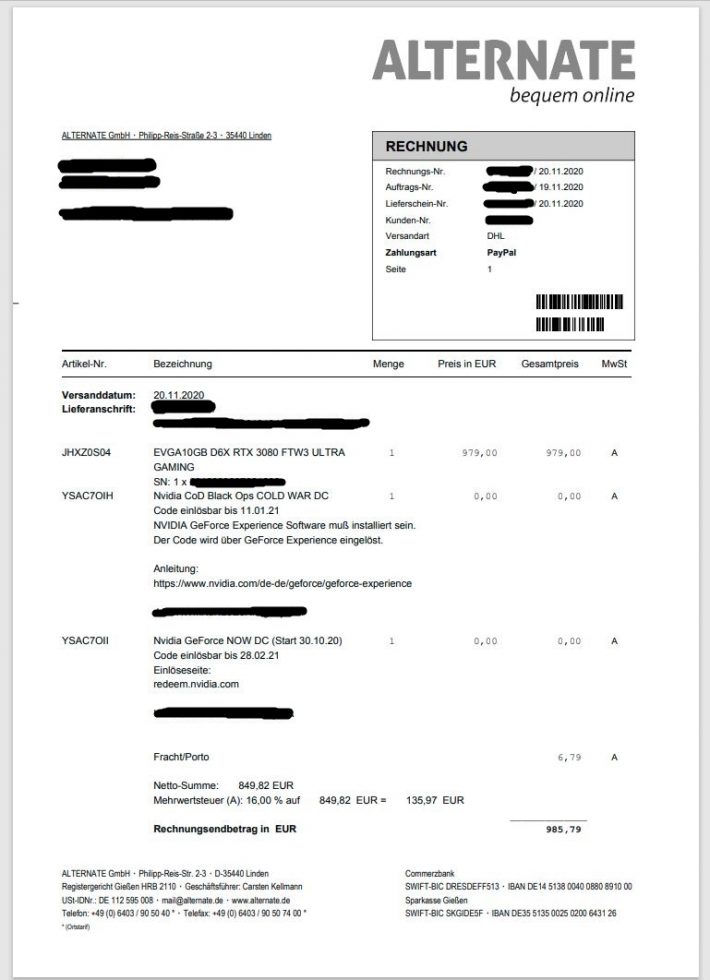 This express RMA, which ultimately also implies the term fast, is per se a really customer-friendly thing when it comes to being able to continue working without much downtime if possible. this is exactly what is not criticized here, but one could certainly recommend it to other manufacturers for imitation. I will now quote verbatim from EVGA’s own published guidelines for this so-called Advanced RMA:

The EAR program involves EVGA shipping you the replacement product first! This program is available for all registered EVGA products under warranty, helps reduce the downtime of your system, and let you, our valued customer, deal with EVGA directly so we can make sure you receive timely service. The program requires a collateral payment to be made for the value of the card, a replacement product is shipped to you, and you then have 30 days to return the product for a refund of the collateral payment….

Sound good? Yes, it is. If it weren’t for the minor annoyances of moving and the question of bail. But let’s proceed chronologically to understand the buyer’s displeasure. In order to be able to make use of this express RMA (EAR) at all, one must of course first request it. The buyer also did this and then received confirmation in the form of an RMA number for the now initiated process.

Then the joy was still unbroken, because everything looked like a really unbureaucratic and quick solution. That this is only possible on presentation of his contract of sale (see above) is also beyond question. Therefore, the copy (unredacted) was uploaded directly through the home page form.

What followed, however, was a brutal disillusionment, because when paying the deposit via PayPal, EVGA suddenly called neither the RRP, nor the purchase price, but a handsome 1728.20 euros for this card as a security deposit, so that the exchange product can be shipped at short notice. But that’s a whopping 175% of the purchase price, or even 185% of the current list price on the EVGA homepage! Even if it is “only” a deposit, the demanded sum makes one quite speechless and leaves the customer helpless in the rain. Because gone is gone for now.

You have already paid almost 1000 Euro and you have to make another 1700 Euro loose to get an exchange at all? Because gone is gone and not everyone has this amount of money left over as play money, because at the end of the day, from his point of view, it’s nothing more than a kind of interest-free loan to EVGA and the money is gone for the time being. Especially since the amount of this payment exceeds even very significantly the price that scalpers and various freeloaders currently demand on Amazon Marketplace. EVGA even puts itself at the forefront of those who see prices more as an object of speculation. 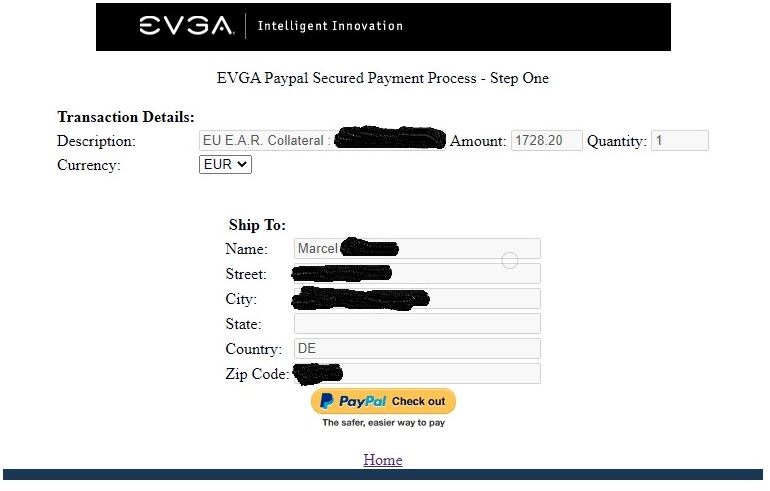 And what does the customer do in such a case? He gratefully declines and goes the normal RMA route, including the fact that he probably needs another solution for his PC in the meantime. 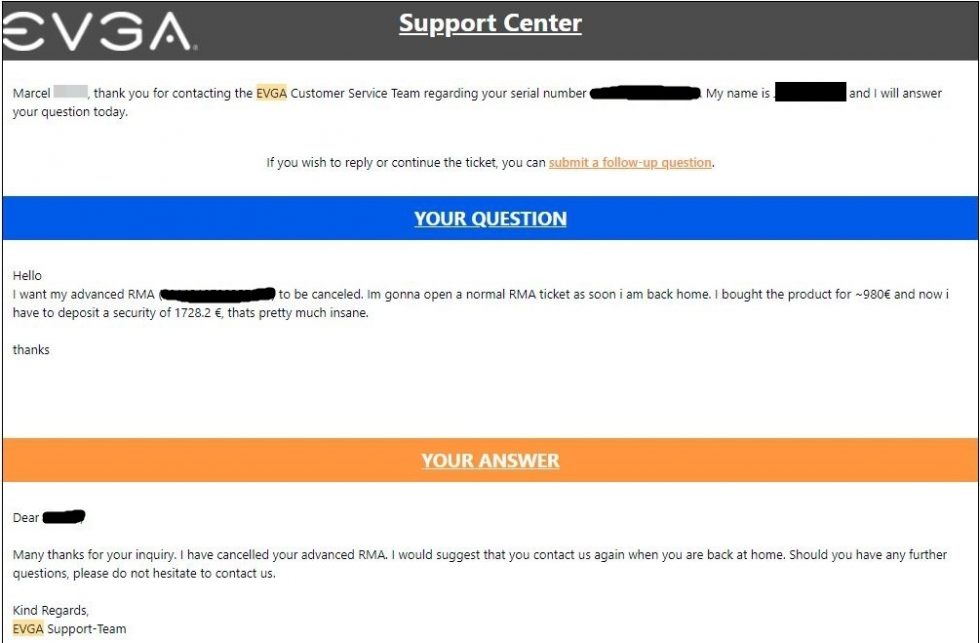 What can we learn from this? Here the manufacturer tries to keep away the buyer from the full-bodied advertised fast RMA by artificially high held and absolutely utopian seeming security deposits. By the installation of such extreme financial hurdles, which were screwed up to 185% of the self offered purchase price on the homepage, the use of such a service is thus only something for customers, to whom the money sits loosely enough at this point, in order to be able to make such a thing at all. However, it is not for those who have saved up for such a product over months and for whom the financial corset is much too tight to have such a sum of money to spare.

This is exactly why this rush RMA is actually completely unnecessary and even holds a bit of social dynamite. Because to want to make (temporary) capital out of the misery of the customers is already annoying, but here to want to gallantly shirk the generosity they themselves have entered into is almost shabby. And so, in the end, many an alienated and deterred customer may become the buyer of a significantly cheaper replacement product, which could even be sold at a possible profit after the normal RMA has been completed.