What does an animal do when it finds itself cornered? It bites wildly. And a larger company? It secures the supposed silverware, initiates a wave of warnings and lawsuits in order to be able to derive the greatest possible benefit from (still) valid patents. We’ll see exactly how and against whom the company is taking action (including an exclusive doc) in a moment, but first consider the part of the story that is publicly available for all to see.

Outwardly visible to everyone, Asetek has had to sharply revise its full-year 2021 earnings guidance. As a result, consolidated sales are currently only expected to grow in the range of 10% to 20%, compared with the previous forecast of 20% to 30%. But sales alone are relative, because in the end only the operating result counts. And this is where it gets interesting, because the forecast was previously US$8 million to US$12 million, but is now reduced to US$0 million to US$2 million.

The reasons are complex, and Asetek itself primarily cites U.S. embargoes against China, increased component and shipping costs, and a $2.5 million one-time cost from exiting the HPC (data center) sector, which still accounted for over 10% of total revenue in 2020. According to my information, the withdrawal from the Enterprise segment has been announced for a long time, as Asetek never really managed to gain a foothold there – so it is anything but a surprise. The company has also been trying to shift its focus back to the gaming sector, and thus the consumer sector, since 2020.

Timely with this, a promotion that Asetek launched back in November 2020 that has been little publicized because the industry is generally quite silent. For example, Asetek has asked countless companies that manufacture (or have manufactured) all-in-one compact water cooling systems and sell them in the USA to withdraw relevant products from the market there. It’s not the first action of its kind (the prestigious lawsuit against Cooler Master comes to mind). Last year I already received an exclusive letter proving that the US law firm Finnegan (in this case against the Swiss company Arctic), which specializes in such matters, had filed a complaint of patent infringement. I will write something about the patent in a moment, now you should read the content first. 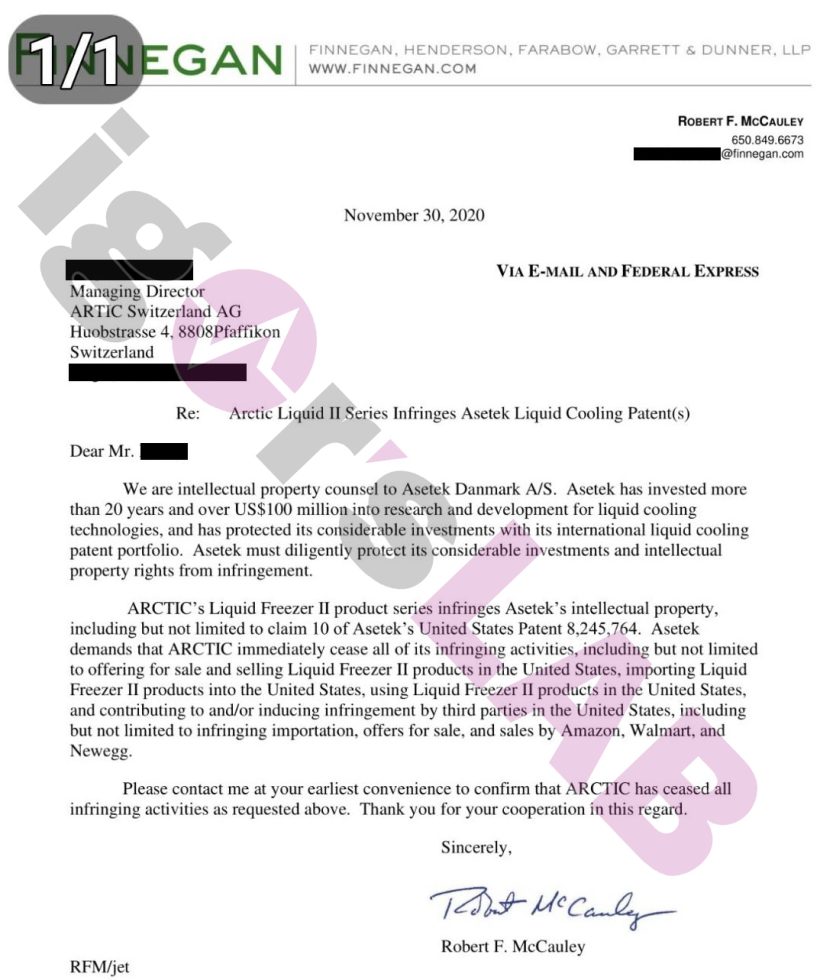 Of course, such a letter is only a first warning shot, and it is also forbidden to disclose documents from ongoing legal disputes in public. However, it is interesting to see who all received these letters and how panic-stricken the reactions of some of the companies concerned were. According to my current information, besides Arctic also companies like Aerocool, EK Waterblocks, Jonsbo, Lian Li and others were contacted (which is of course mainly due to the Chinese OEM used).

Of course, very little is known about the further course of the whole action, but one does get one or the other hint that they are either frantically trying to come to an agreement with Asetek or rather see the whole thing with a gesture of nonchalance, depending on the company (and size). All in all, however, a success against the competitors could have a positive effect on the feared zero at Asetek again, which could certainly be put to good use.

But what does the patent US 8,245,764 B2 actually say? Everything and nothing and you can actually cover and attack almost anything with it that has a pump, reservoir and heatsink if you look at the details listed. One should also know that the patent protection is only valid until June 2025, so it seemed to be time again to make a (pre)final attack.


I have one or the other good connection to some of the companies listed above, so that the further course can be documented for sure. So it remains exciting to see if and how Asetek will develop its focus on the consumer sector against its competitors and prevail. Recently, they were able to win larger customers like MSI (Core Liquid). So, as always, it remains exciting.

Intel Core i9-12900K, i9-12900F and i5-12400 – Pictures of the new Alder Lake CPUs and details about HGS (Hardware Guided Scheduling)
Liquid metal pad in a practice test – blessing or curse? How to safely achieve the magic burn-in! | Tutorial