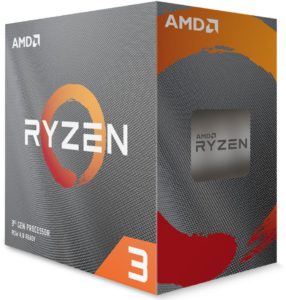 The fact that AMD would beat competitor Intel precisely with what would otherwise always have to be used as a headline argument by the core faction is not without a certain irony. Four cores, but with SMT and in one case even with neat turbo-stroke on the four pots are enough to make the normal gamer reasonably happy. From 109 euros the party with the Ryzen 3 3100 is to go, the ticket to the noble wood class with the Ryzen 3 3300X costs with 129 euros also only approx. 20 euros more.

But what does wood class actually mean here? Intel has repeatedly emphasized that the broad mass of games does not require an inflationary core mix, but only a few, but fast arithmetic to swim quite far ahead. And in normal office life, that applies anyway. Until now, however, the AMD small animal breeders were rather unlucky with the CPUs, because the entry-level models were mostly shy even at the beat. But AMD is now fundamentally changing this with the Ryzen 3 3300X, which is good and happy to boost up to 4.3 GHz and which is very close in practice.

The Ryzen 3 3100 without X is the smaller and 20 Euro cheaper version, although 4 cores and 8 threads are also sold. The difference lies in the beat and the different design. This gives both CPUs a very different character and leaves a clear mark in everyday life. Without wanting to spoil it in advance, but the Ryzen 3 3100 is not something to worry about outside the office or children’s rooms. With the Ryzen 3 3300X, on the other hand, the tooth of the fervent thrift foxes drips quickly.

The following graphic shows why one CPU runs like a gazelle and the other has to chase a little, because it has to constantly pull up the slippers while running. The Ryzen 3 3100 comes in an unfavorable 2+2 design, which means that only two half CCX’e are used in the active CCD, which with 8 MB per CCX can use only half of the 16 MB per CCX and can thus result in awkward latency if computational tasks are cross-CCX. With the Ryzen 3 3300X, on the other hand, an entire CCX with the 16 MB L3 cache is fully used in the 4+0 and the rest restrests in forced sleep. This is not only faster, but also avoids unnecessary overhead and can even be overclocked better. 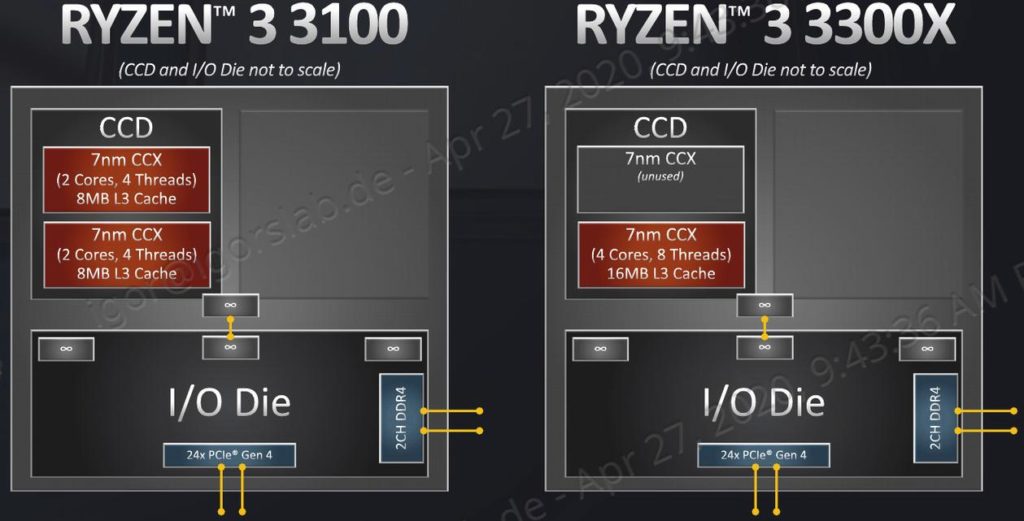 The rest of the architecture is no secret and I’m not going to get lost in repetitions now. If you would like to know more about this, you should refer to the very detailed launch article here.

What I’m testing today (and what’s not intentionally)

I always listen carefully to the feedback of readers and YouTube consumers and read along almost always in the forum. What I’m not going to do today, however, are 720p tests with dozens of CPUs and theoretical considerations of what future security such a savings setup could have in a few years. This is also countered by the fact that the whole Corona craze from the CPU portfolio of a friendly trader has almost completely cut me off. That’s why I had to buy a Core i5-9400, but it fits my plan, like the famous fist on the eye. Because at the end I implemented a project that I always wanted to do, but for which I lacked the last push.

So today I test the Ryzen 3 3100 and the Ryzen 3 3300X against the Core i5-9400, a nearly 190 Euro 6 core from Intel, but without hyperthreading. In addition, I pack the Ryzen 9 3950X as a counter-check, because I run all but one test in normal creator mode with all 16 cores. By the way, the result will surprise you, but more on that. I test all CPUs with the same memory clock rates, if only because the RAM has an XMP profile that fits perfectly at 3200 MHz. But I can already spoil the fact that it wouldn’t have saved the Core i5 to run the RAM with 3600 MHz++. It’s all simple and emotionless out-of-the-box, including the factory OC by PBO between. Enhanced Turbo and thus exactly as the end customer would assemble it. Motherboard defaults.

What I have in the detail is quickly explained. I have selected three special games, which I have in Full HD (1080p) with 3 settings and very different graphics and graphics. Run CPU load with a whopping 12 graphics cards that start at entry level with the GeForce GTX 1650 and end in high-end with a Titan RTX. It will show us which settings are worthwhile in the combination with the respective CPUs and which GPUs either limit generally or in the upper end if necessary. money thrown out. And yes, Intel is even somehow right about the PR argument. But more on that later.

By the way, after a few samples, I deliberately dispensed with long application benchmarks and preferred to use more graphics cards. Everything that Office gives runs softly like butter on both Ryzen 3, you don’t have to test that again, because it went well on the predecessors. Well, and for Video & Co. they are definitely misplaced in professional use, where time also costs money.  At least AMD’s PR slides are accurate in this regard, so I just use myself there. There is nothing else that comes out of my samples. 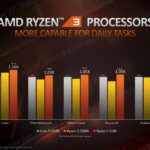 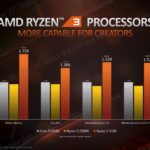 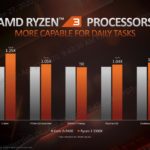 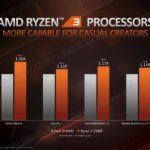 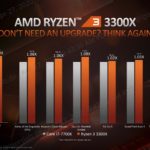 So I’ll focus on finding the optimal graphics card combination on the next pages, because I can already spoil the fact that the result completely surprised me with one exception. But first of all, a comparison of the current Ryzen 3 CPUs with the corresponding Intel counterparts: 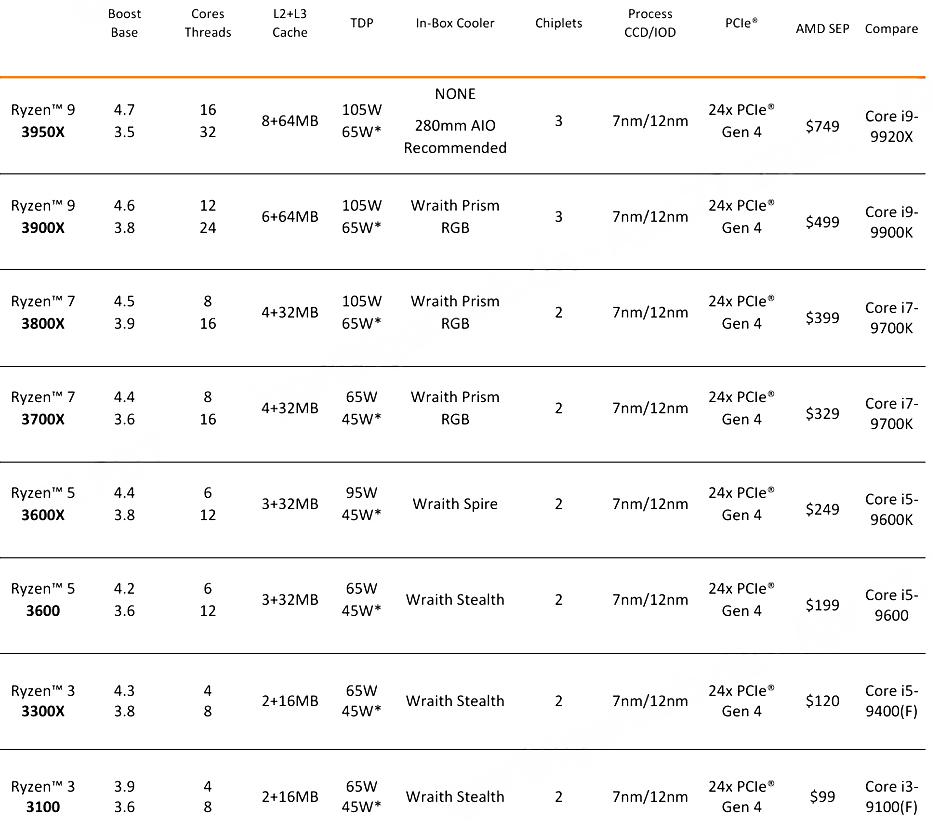 Since I also want to use the Ryzen 9 3950X and also with the RX 5500 XT a PCIe Gen. 4.0 graphics card is in the setup, I will use an X570 system due to lack of B550 board. Since I also want to grant the Core i5 the same right, a similarly expensive socket Z390 board is used. I admit that both boards are really nothing to use at the entry level, but they both have specially prepared procedures for the measurements on the CPU and have not only been calibrated once. A counter-test with a low-cost B450 motherboard and the RTX Titan with Ryzen 3 3300X did not bring any differences in final performance that would exceed the measurement tolerances. Only the Radeon RX 5500XT collapsed by up to 8%, but I’ll write something about it later.

The 32 GB expansion is as far as identical to the current Intel system and the change is in no way detrimental to the path of knowledge. I have listed this system in tabular detail:

AMD's Ryzen 4000 'Renoir' desktop CPUs with 8 cores and SMT with up to 4.0 GHz clock speed leaked and benchmarked – launch as early as July?
Why manufacturers are struggling with AMD notebooks, why AMD likes to trip itself up and why the blue conspiracy is not a conspiracy at all | Search for answers