What should one actually write in capital letters about a mousepad if it works? but people are curious and since everybody and everything is screaming for RGB by now, one can also try it on oneself. Since I, as a user of a full-size mechanical keyboard and low-senser in general, only use pads with a length of at least 90 cm and a depth of 40 cm, the selection in the end was even smaller than expected. With the XPG Battleground XL Prime RGB Gaming Mouse Pad.

Of course XPG has not reinvented this pad, but had it labelled (and customized) by an OEM, which is normal and common in the industry. That’s why I see these tests as representative for all other pads of this version, which are sold neutrally or with a different brand, no matter by whom. Most of them have a maximum size of only 80 x 30 cm and thus fall through my personal raster, but are much cheaper.

The actual unboxing is fixed, with the pad rolled up on a solid cardboard sleeve, which protects very well against possible transport damage. The rest is the usual, whereby the approx. 1.8 meter long cables are attached by means of a micro-USB socket and plug. So far, so simple and understandable. 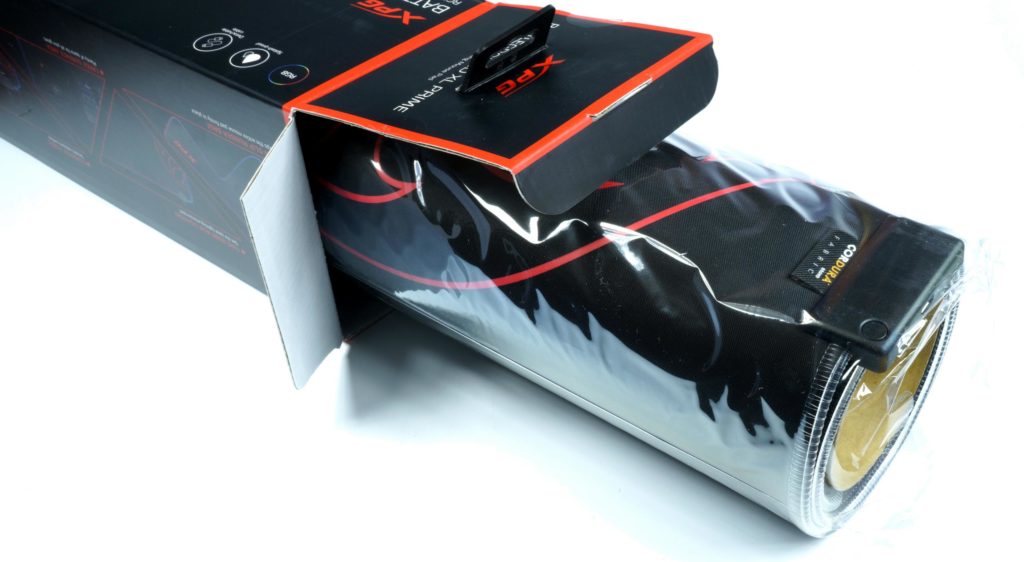 The dimensions are already princely, but it is exactly what I wanted. The textile of the surface is water- and coffee-repellent (tested with half a cup of Lavazza) and has pleasant gliding properties even for the low-senser. It is suitable both for advertised gaming and for creative and productive use. Pixel-true photo retouching or construction tasks were also free of problems with mouse input with this pad without getting used to it. The fun is also non-slip, thanks to the soft rubber coating on the back.

The somewhat rigid light strip as a surrounding border has to be smoothed out first, but indirectly also ensures that there will probably never be frayed edges, despite the lack of warping. RGB nulling is performed by two LEDs located on the side of the controller box, which illuminate the surrounding translucent material in colour.

Due to the design, the brightness is of course strongest at the exit point, but it is sufficient for quite good illumination up to the point where both light beams meet. The integrated RGB controller does not have an on/off button as many competitors do, but only the RGB selector switch. It is a 2-zone control, but it is a little tricky to operate. By default, both zones are controlled simultaneously, so that you can easily browse through all 7 colors.

If you only want to change one of the two zones, you can quickly click twice. A short flashing of the active page(s) shows the selection, so that you can now change the colors separately or for both sides (fixed or automatic change). Depending on your taste, this even results in quite nice colour gradients due to the additive light mixing. I prefer to take it neutral white. Unfortunately, the enclosed documentation does not tell us anything about the choice of colours, because I had to find that out for myself first.

I found the online manual later on the website, and there was definitely nothing in the package except cleaning instructions. Therefore at this point the PDF as documentation:

Since the RGB lighting cannot be switched off, the load is constantly present. White, by the way, generates the highest power consumption at the USB port with a good 200 mW. It’s also a pity that you don’t use a USB hub to connect the mouse right away. This in turn could have saved a cable to the PC.  There’s no need to write anything about the quality of the inherently fragile micro-USB sockets, because the plug will probably always stay in anyway.

Before I come to the conclusion of my almost 4-week test, I have quickly summarized the relevant data in the table:

If you don’t want to copy the manufacturer’s self-advertisement in the Influencer style, the flow of text is already at the end here, which by the way is also to be understood as a positive judgement, because I haven’t noticed any serious mistakes. The workmanship is okay, optically and haptically everything is in the green zone. Except for the missing on/off button, there is no reason to complain and the pure function as a mouse pad is also perfectly given. The gliding ability is sufficient to good, robust and resistant to spilled liquids.

What is somewhat irritating is the price, which for example is significantly higher than that of the competitor product from Sharkoon, even though it does offer an additional on/off switching function and has 5 mm more edge length. However, the current street price of approx. 44 Euro (Amazon) must correct themselves, as almost always with such products.