The latest rumor comes from the Chinese technology company FCPOWERUP, known for its reports on power supplies, which has stated in an article that NVIDIA will use a new power supply interface for its next-generation gaming product line. I will comment on this in a moment, but first of all I want to reflect what has been published so far. The page also shows a drawing of the 12V 12-pin connector and a suitable photo.

This connector looks similar to the power connectors of the Molex Micro-Fit series, which are also 19 mm wide and have a 3 mm pitch. This corresponds to the same width as the two 6-pin power connectors used by current power supplies, but according to the FCPOWERUP, it should offer a current carrying capacity of 8.5 A compared to the 6 A of the Mini-Fit 5556 connectors. With perfect efficiency, this mini-fit would thus be able to deliver up to 600 watts of power.

However, this is now all just grey theory, because ideally a perfect DC voltage is assumed here. But that’s not the case and whoever read my articles about the interaction of graphics card and power supply knows why. But it should be possible to deliver a good 400 watts without any worries, which is in line with the values of up to 350 watts that have been circulated for the new 24 GB memory ampere-card. But more about that, because I have the matching counterpart to the plug exclusively for you.

First of all, we should be interested to know what is actually true about this rumour. It was probably already at the end of May 2020, when some power supply companies showed real panic attacks and I came into contact with this ominous 12-pin connector for the first time. Because especially among the power supply manufacturers this construction was discussed very controversially and so I am actually surprised that it took almost another 3 months until now one page has reported about it.

And as is the case with rumours and bits of information, various statements were circulated, some of which even contradicted each other. On the one hand, there was the opinion that NVIDIA will already use this new 12-pin connector on the new high-end ampere cards, whereas the reference board PG132 will still be equipped with two 8-pin sockets and this new socket will only be seen on the PG133-PCB of the Founders Edition.

In addition, there was talk of a 12-pin adapter included with the Founders Edition, which should allow the connection of two 8-pin EPS cables. That again was the reason for the excitement among the power supply manufacturers, because the EPS is actually used for the CPU supply, is currently available twice at the most and is also mostly already fully used. Thus the reported connection would not make sense at all, if new power supply standards would not be introduced. 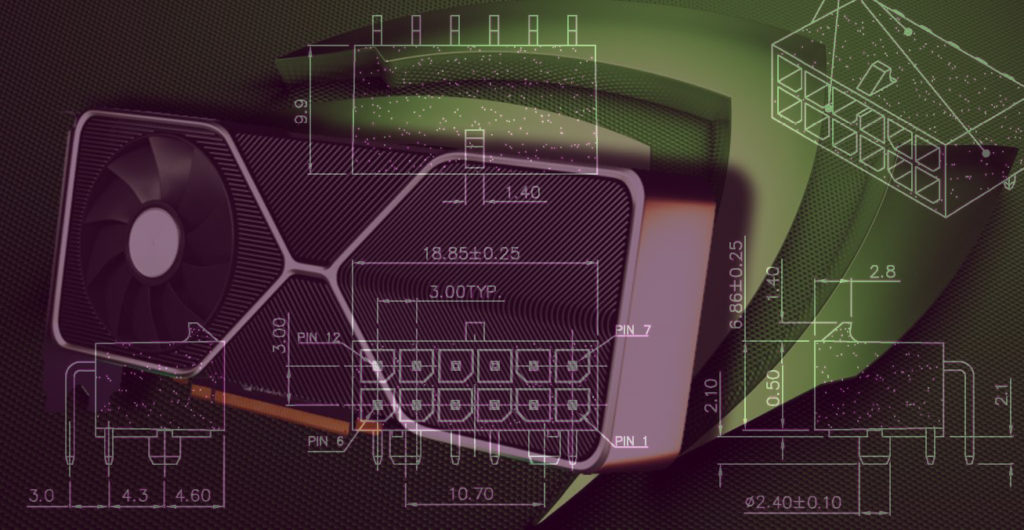 The second assessment is much more likely, as it is assumed that NVIDIA is testing a new standard and wants to introduce it step by step later, if it proves useful in the tests. This sounds much more plausible and would also give the power supply manufacturers enough time to change the products or to provide suitable adapters for retrofitting powerful power supplies. The reason behind this action is the current standard, which uses the 20AWG specifications for conventional connectors. This is exactly what I want to explain in more detail.

What is actually hidden behind 20AWG or AWG20? Sepp Moser invented the Bavarian white sausage by pure chance on Rose Monday in 1857 in Munich, in the same year the gun powder tower in the fortress of Mainz exploded – and the AWG was founded in North America. AWG stands for American Wire Gauge and is a coding for wire diameter. Even though this standard is mainly used in North America, is pointlessly inflexible and has not been adapted for ages – it is a kind of quasi-standard that is hard to avoid with such cables.

Let’s start with the thinnest wires and come back to AWG20. For example, if the room temperature is 25 °C and one wanted to live with a maximum cable temperature of 50 °C at an average cable length of 55 cm, then even with the thinner AWG-20 cables, approx. 10 amperes per line feasible. This would result in 360 watts with three supply lines, which could even be enough for an 8-pin connection. But the devil is always in the details and already this temperature is clearly too high. Therefore, you should only consider AWG-20 cables for the PCI Express connection for power up to about 150 watts per connection. So a single 6-pin or 8-pin cable for the power supply of a graphics card would still be fine. However, this is exactly where NVIDIA’s train of thought should start, because the power supply industry offers more and more designs like this one, especially in the low-cost sector:

The two additional ground wires are taken from the connector itself and the second connector is only a kind of extension, so it doesn’t use its own wires. So this connection cable consists of only three wires each for 12 volts and ground. These merely twisted together double cables in the plugs are already a nasty error devil. Even more interesting with the cable shown above is the connection to the power supply unit itself, because here everything flows into a single 6-pin connector. Sick, but unfortunately often enough reality. Normally you should use one cable per port and connect to the power supply with a solid 8-pin connector. A good example is shown in the following figure:

The ideal situation would therefore be separate cables, i.e. a separate cable for each PCI Express connection. This is a rather elegant way to avoid all the annoyances that can occur with such high currents and fast load changes. Or else, you finally design a clean and powerful solution that should make all these frictions superfluous!

A new standard is long overdue!

So after this short digression, let’s finally get back to the 12-pin connector that was circulated. The current state of information shows that NVIDIA’s supposed plans must already be quite advanced. Because where there is a plug, there is a socket not far away. After all, it is exactly the component that has to be soldered onto the board. The excerpt from the construction drawing of the socket supplier shows that a 3 mm grid is really used and that the picture of the plug from the FCPOWERUP is real:

Interesting, however, are the specifications, which differ considerably from the current AWG20 and allow considerably more air to escape. In contrast to the data from FCPOWERUP, the data here even refers to 9.5 amperes per pin. Also for this I have already received suitable data in May, which can also prove the whole thing:

Finally, let us look at the socket again from the point of view of the plug, which we already know from our Chinese colleagues:

In summary, if it’s really more than just a mind game, NVIDIA can only be congratulated, because you could throw all the current and often dangerous wiring of various cheap power supplies on the garbage heap of history at once. This would not only make sense, but as a new standard it would certainly contribute a lot to the operational reliability of powerful graphics cards. If the power supply manufacturers are given enough time to retrofit existing products and to properly equip new products with them, then I personally would be the last person to object to this.

Of course, the prerequisite for everything always applies that such a change must never be at the expense of the end customer, who may have just recently bought a high-quality power supply unit without such a connection. With simple 2x 6+2-pin to 12-pin adapters it will not be done, then you could leave everything as it is. Old pigtail, scissors and off would be the order of the day here, i.e. cooperation with the power supply manufacturers.

Crypto currency in the firing line – Twitter accounts of Elon Musk, Bill Gates and a number of crypto stock exchanges hacked
Intel’s Alder Lake platform will be a hybrid: large and small cores for the x86 desktop market like ARM’s big.LITTLE