I had recently already measured it in the article “GDDR6X at the limit? Over 100 degrees measured inside of the chip with the GeForce RTX 3080 FE!” and noted, that in extreme cases temperatures of over 110 °C were reached during mining or with Furmark, which of course falls into the more questionable range. It’s interesting that NVIDIA only cools some voltage converter areas and PWM controllers over the backplate in the FE but nothing else. 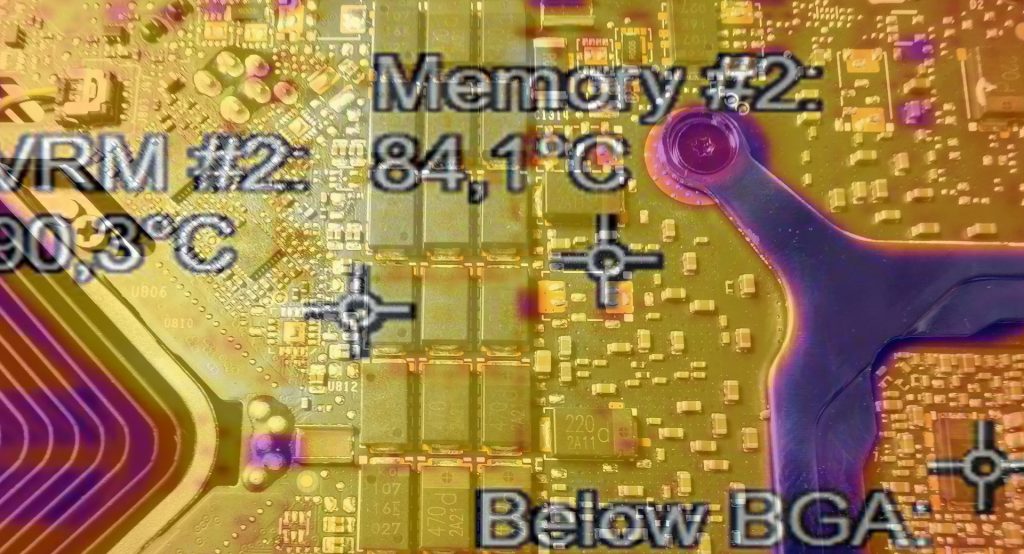 I used superposition to find out where NVIDIA had placed its own thermal pads in order to use the backplate for cooling. Here one could have (and certainly had to) been a little more generous. Now I have removed the backplate again to cover the relevant areas with my 3 mm thick Ultrasoft pads, which can be deformed under pressure almost like thermal paste to such an extent that they fill every gap, but do not exert unnecessary pressure on the components. But I didn’t want to make the area too big, because I like it more selective and the backplate is not the best heat conductor. Too much oversaturation is rather counterproductive. The whole thing looks like this: Same situation as before and behold, the temperatures are suddenly absolutely mannerly!

It’s no secret that memory modules can become significantly hotter inside than the outer surface on the top of the package or the bottom of the board would suggest. The fact that such hotspots, as on the Founders Edition, can be recognized and, above all, effectively defused, is also no secret. Why NVIDIA then nevertheless does without it is not quite clear to me, because the measure is quickly implemented and does not even cost an excessive amount of money.

The fact that the memory temperatures lead to stability problems has already been confirmed to me from Etherum miners and also the fact that the cards are completely converted to water cooling, because it is mainly the areas next to the GPU that can become problematic and not the GPU itself. Nevertheless I would like to add a note for the normal user, so that the problem is recognized and classified correctly.

The originally measured 104 °C in the gaming loop are high and would probably even increase if the ambient temperature of the card increases significantly. As far as shelf life is concerned, Micron unfortunately appears overcast, but I for my taste would not accept more than 110°C, especially with more frequent load operation. But the GeForce RTX 3080 Founders Edition is already dangerously close to the limit. It is nothing that would destroy the card right now, but there are no long-term tests for this memory yet.

The mod with the heat conductive pads costs hardly any effort and money, but in my opinion it is the ideal prevention to avoid possible late effects from the beginning. To finally implement the whole thing without any worries, you only have to remove a small frame, 8 screws, 4 covers and the backplate, put the pads on and reassemble everything. My video shows how the dismantling works. But please don’t disassemble everything, just stop and stop when exposing the back of the board.