After several patches Horizon Zero Dawn has hardly run stable, much smoother and finally gives you a lot of fun while playing, when the next autumnal total breakdown comes, which surely can’t even be repaired. And if you thought that after all the Crysis sequels, things couldn’t get any worse, you are completely wrong. Because one of them is still going, at least on Crytek. I enjoyed the first part in 2007, meanwhile my pity with the descent of the whole company is very limited.

Actually I had imagined Crysis “Remastered” after all the full-bodied promises as a raytracing replacement for all graphics cards and wanted to include the game in the benchmark list at short notice. Those were the wish and the goal. But at the latest with the search for a usable savegame and the suitable settings I gave up at some point, unnerved. No, this is no longer “my” Crysis as I have loved and searched for nights on end. And so, instead of a new game in the benchmark selection, I saw a new example of trying to squeeze some money out of a colon end product before it all goes down the drain anyway. 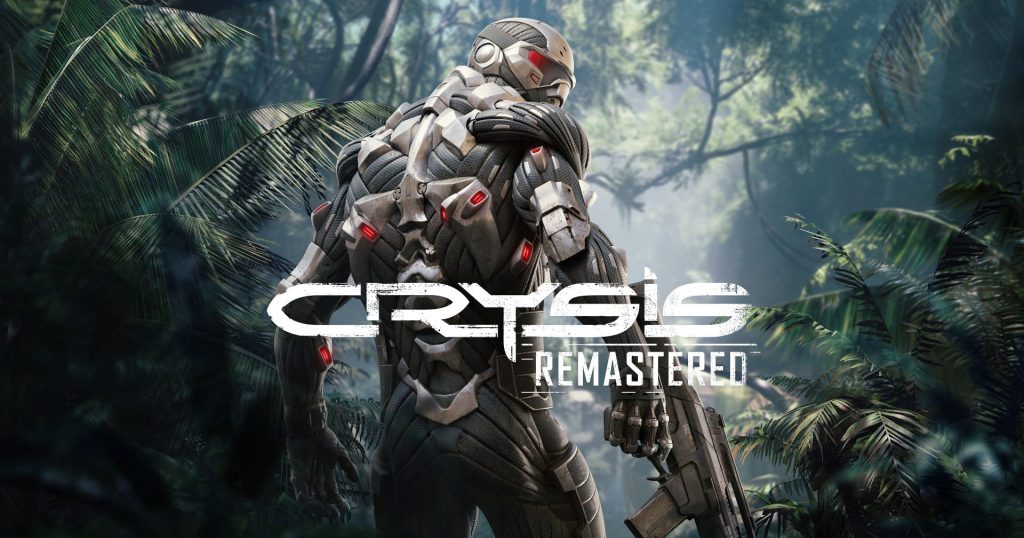 But what I bought in the Epic-Store for about 30 Euro in time for the start of sales, can be described, even with the best will and goodwill, as a final rip-off, if you want to avoid the anus verbally. Graphically, this is stone age, and technically, it is a complete catastrophe. Who would come up with the idea to sell a trimmed and bad console port as “remastered”? Well, the XBox controller is now fully recognized, great. It’s pure witchcraft. But one has inherited the sponginess and senseless latencies.

But in return, as with the consoles, a complete mission was cut out as compensation, incomprehensible. Especially since it was one of my favourite missions. The important sandbox editor is also missing, by the way, complete exclusion criterion. Console works, visually, but many inputs are only accepted but not really taken over. Okay, let’s have a nice, sequential whine and also regret the missing multi-payer. Condolences were offered. Please send flowers and wreaths to Crytek. The handkerchiefs will be available later in Epic’s store as DLC.

DirectX11 as an old substructure is now not necessarily the recommendation for a modern API, if you are looking for performance hungry things like also wants to implement raytracing. The CPU is already suffering and sweating as it was in 2007, but never runs on all possible cores/threads. I overclocked a Ryzen 9 3950X to 4.5 GHz, used a MSI GeForce RTX 3080 Gaming X Trio, gave the system 64 GB DDR4 3600 RAM and a PCIe 4.0 NVMe-SSD, and then combined it all on a MSI MEG X570 Godlike. Can it run Crysis? that’s what you’d think, but far from it! 40 FPS or so were already in Ultra-HD from time to time, but often enough only around 30. The rest was somewhere in between. 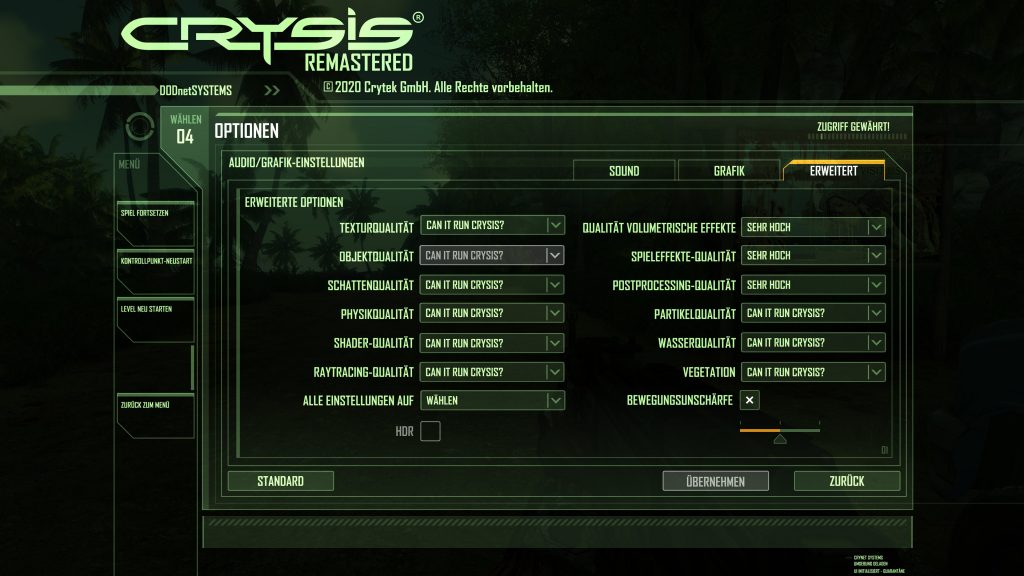 To be able to use all effects at all (I don’t even want to start from really seeing), you have to choose the maximum configuration. Well, that’s going to be pretty easy so far. Ray tracing is only noticeable and fairly existent in maximum mode, but it costs a lot of performance. Tessellation? Another foreign word, the polygons look like they were cut out of hard cardboard by a gross motorist with big scissors. Many textures were taken over from the 13-year-old version. This not only hurts the eye, but is simply fraud. 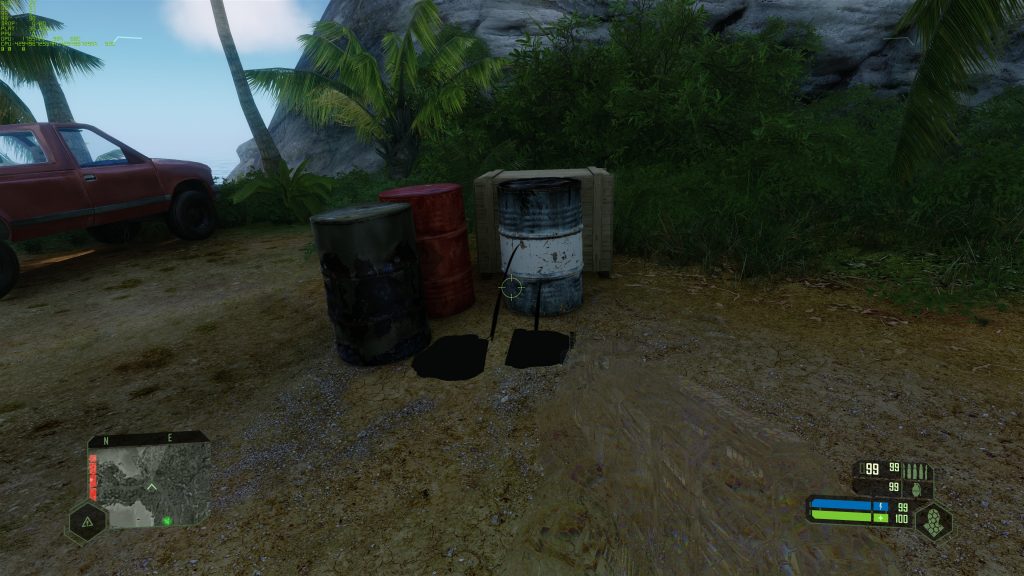 If you look at the contents of the archives (*.pak), a very large part has simply been copied around 1:1 without any love or pleasure. As the owner of the original version, who has now paid another 30 Euros for a useless optical DLC, I simply feel cheated. Not much “remastering” was done and many free mods look much better now. Especially since at the maximum in the Config completely senseless values are entered, just to throttle the performance. 300 meters visibility is just one gimmick of many, which artificially lowers the performance, but offers no visual added value. Internship stuff.

Which doesn’t help either: Gama is virtually ineffective, contrast and brightness don’t change anything in the game.  And why do I have to choose the language again at EVERY program start? Well? I don’t know. 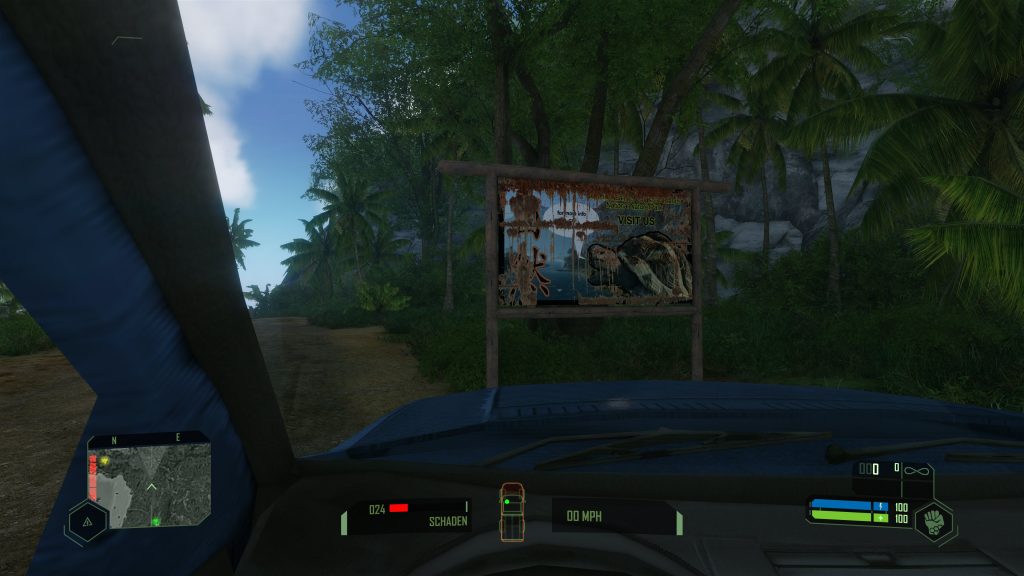 But even so, the visual impression is rather meagre and one wonders what one has been up to all this time at Crytek. The movement of the vegetation is close to zero, palm fronds move in unison (how boring), but the bushes and grass directly below are completely static. Parallax Occlusion Mapping tends not to work against anything, the matching textures are almost always missing. The whole thing seems flat and sterile, lifelessly held. And also the destruction of various objects is rather a colourless pixel comedy. For example… shoot a palm tree three times and bend it and it’s gone. 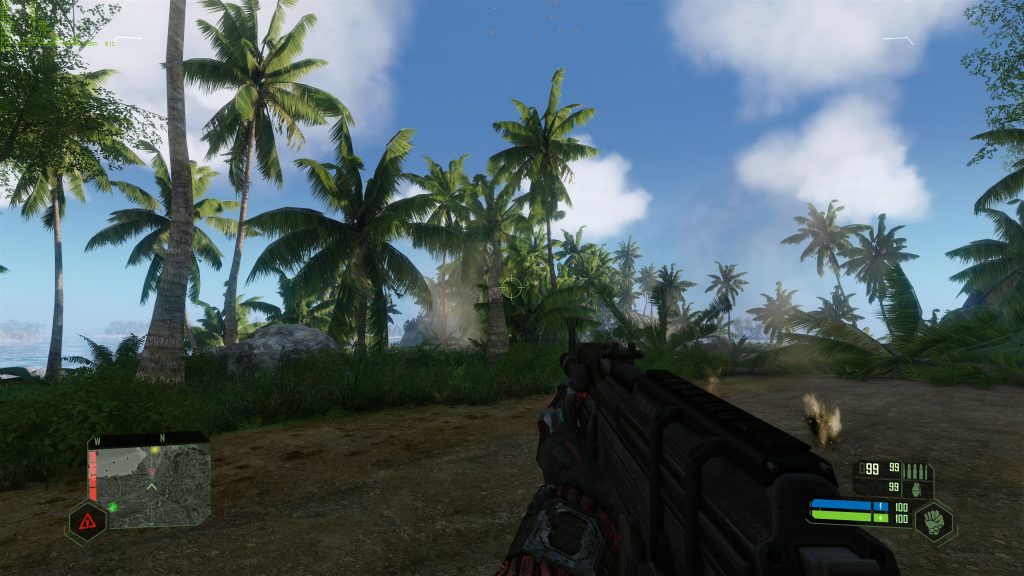 On the other hand, if you take a grenade, then Veggy-Day is every day and you save the greenery completely from spoiling. Then nothing is destroyed, but lovingly ignored. Opulent particle effects won’t help anymore, but there have been good mods for ages. Well, and about the controls and the gameplay you could write 10 volume complaint books now. 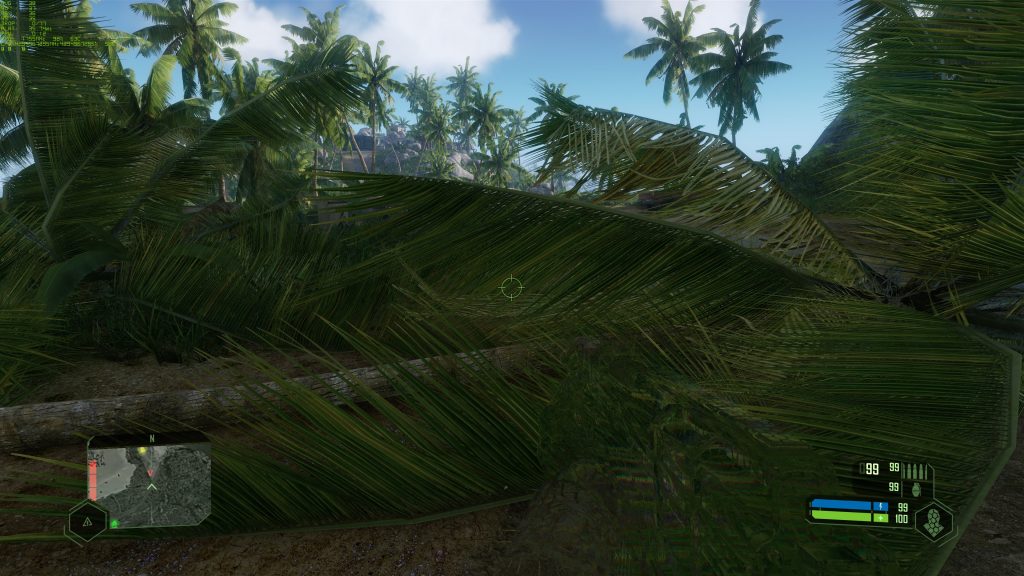 Which programmer has permanently activated mouse acceleration and stapled it in place? As a Crysis veteran, you’ll also shed bitter tears over the Nanosuit and Movement. Apart from the completely different key assignment (why actually?), the modes have been greatly improved and in some places made unusable by unrestrained castration. If a mode is activated via E, both, sideways jumping and leaning sideways is completely impossible. Cut out for nothing. You simply can’t change modes in motion and I don’t have endlessly stretchy rubber fingers either. Node in the fingers preprogrammed. No, not like that! 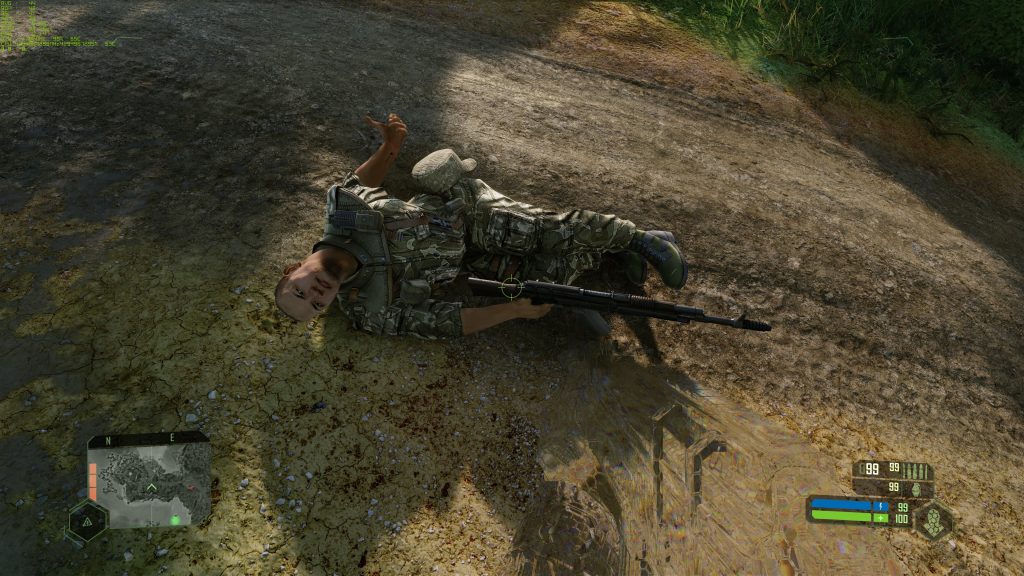 Why I’ve written so much about a new ddigital disaster on that wouldn’t have been worth a single line? I’d feel sorry for your money if it would still fill the pockets of those who have so brutally executed this famous game from 2007 with a disgustingly mean gesture of nonchalance. That’s manslaughter at least, if not murder. Because it’s insidious. Remastered promised, delivered crippled. It’s nothing but digital toxic waste, sorry. Buy the original and install a few mods. Entirely sufficient and also saves a lot of money.