The relatively new Sharkoon Silent Storm 120 mm ARGB case fan is still underestimated in my opinion, because with street prices of partly less than 11 Euros, you get an ARGB case fan that could not only convince in the test, but is also easy on the wallet. Of course, you have to accept some minor compromises at this price, but the overall package is almost unbeatable. Today’s test will clarify where it might not be quite enough and what you get for the low price. 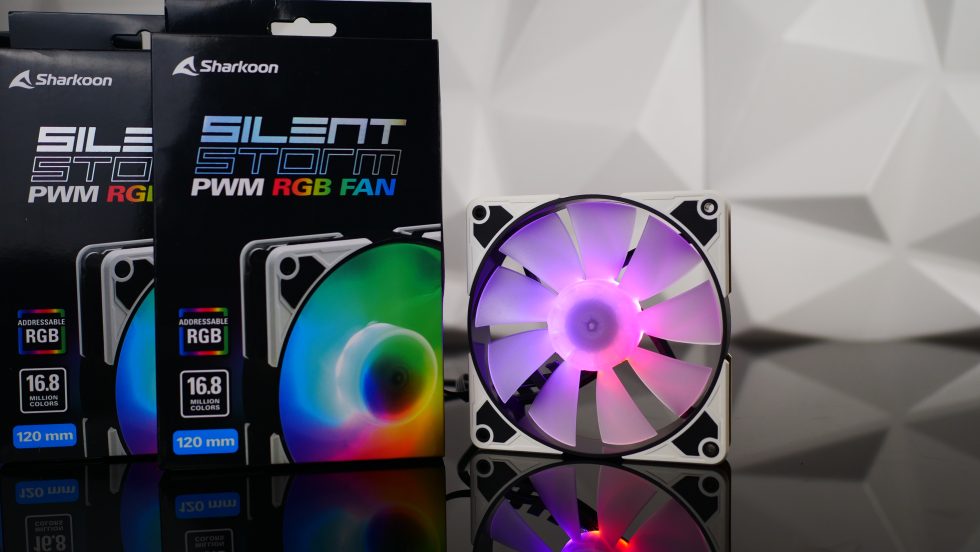 For currently just under 11 Euros, this ARGB fan is a highly interesting offer from the lower price segment and a 3-pack is already said to be in planning. And exactly here we come to the biggest drawback right at the beginning, because you need a separate hub for fan and ARGB, because both connections unfortunately cannot be cascaded (“daisy chain”). We have already asked Sharkoon about this and they promised to include this kind of simplified functionality later on. 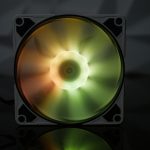 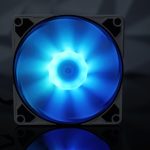 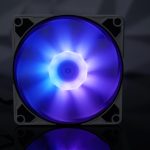 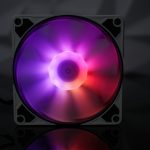 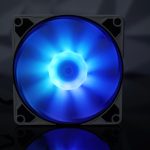 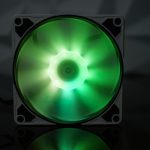 The new fan is at least exactly within the norm with its 25 mm thickness, which of course makes it more comparable in the end, especially since the rest of the design also tends to follow current trends and does not reveal any daring design stunts at first glance. On the contrary, everything looks as expected and accustomed. 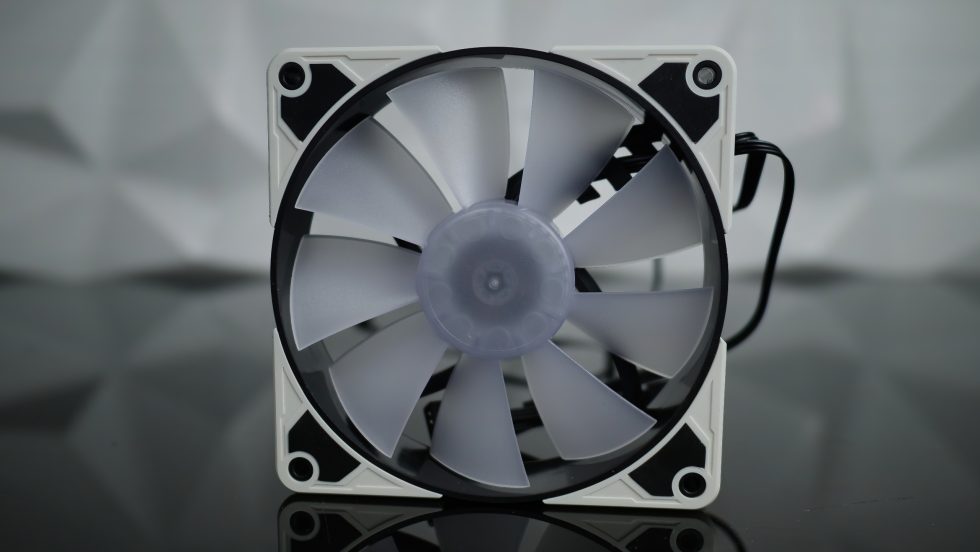 Included is the fan along with screws and four interchangeable corners, which I’ll get to in a moment. The connection is made as usual via a 4-pin PWM connector and the normal digital 5V RGB connector. So please don’t force the 12V RGB of older motherboards, it will definitely go wrong. The cable herding of the two ribbon cables is also solved analogously to most other fans and thus doesn’t pose an obstacle. 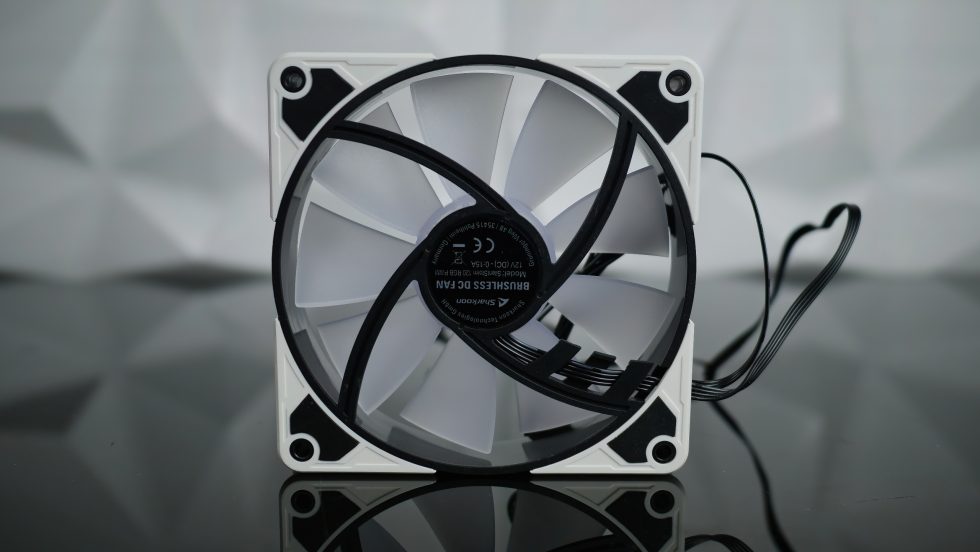 One relies on a hydrodynamic plain bearing that seems quite usable. More is not possible at this price and we have seen worse for more money. The measurements will show later that the bearing can keep up.

The rotor as a counterpart to the black stator is a translucent block with a total of nine rotor blades, as well as slightly beveled edges and corners. The translucent fan blades and the RGB spacing in the hub with a total of 9 addressable LEDs as well as the omission of an RGB outer ring preserve the original rotor diameter, which should naturally also benefit the performance. Everything is supported by a black, plain frame that does not hide any secrets visually at first glance. The PWM-controlled fan manages a measured speed range of about 500 to up to 1400 rpm and does without a fan stop. Thus, the fan does not go off during PWM control, but this does not bother due to the only minimal noise. 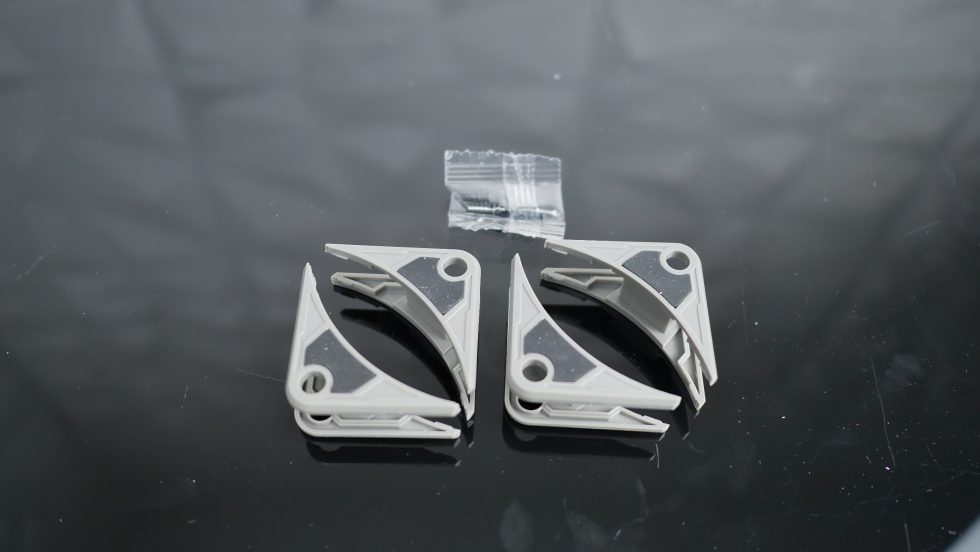 The decoupling with the laterally inserted rubber corners is well solved, since it does not twist with the screw tightened and these corners can also be varied in color. By the way, the gap dimensions and surface finish are good. The power consumption is pleasantly low at full speed with 2.16 watts for the fan (without ARGB). But I’ll get to all the details in a moment, because especially PWM-controlled these fans are better than you would expect from the price

On the next page you will first see how and what we test and why. Understanding the details is incredibly important in order to be able to objectively classify the results later. The differences between many models are more in the details and the best fan for all situations can hardly exist. There is a certain optimum in every situation and, of course, good all-rounders. But they usually have their price. However, if you are planning very specifically with 60 mm radiators, for example, you might be able to save money by choosing the best model for your intended use, which might not perform so well as a case fan. And vice versa, of course.