AMD has almost surpassed itself with the circuit board. Well-corrected hotspots and a very well thought-out design with a very neat input filtering, which relies on a proper LC filter (low pass) and not only on longitudinal coils (chokes), should on the one hand attenuate the load peaks at the power supply and on the other hand increase the stability of the whole system. Nobody really needs annoying HF-wave salad. With an XDPE132G5C from Infineon, AMD has opted for a very high-quality PWM controller that drives the 10 phases for VDDC_GFX of the RX 6800 XT. The RX 6700 has only 7 phases for VDDC_GFX, whereas the RX 6900 XT has 11. However, all boards use the same PCB. 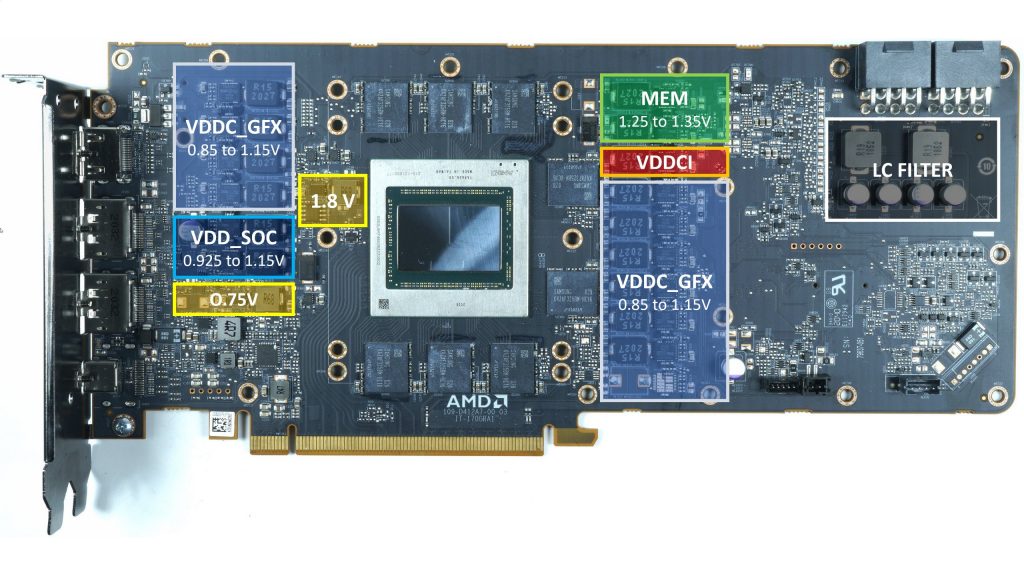 Parallel to this, IR352717 is also working for the generation of other partial voltages such as 2 phases for VDDC_SOC and 2 phases for VDDIO_MEM. In addition, we find a phase for VDDCI, so that in total there are 15 phases for the different main voltages, all of which operate with one TDA21472 per phase as a Smart Power Stage, which can deliver a maximum of 70A. The TDA21472 includes a synchronous buck-gate driver IC in a co-package with Schottky diode and the high-side and low-side MOSFETs. The combination of gate driver and MOSFET (DrMOS) allows higher efficiency at the low output voltages for the GPU. 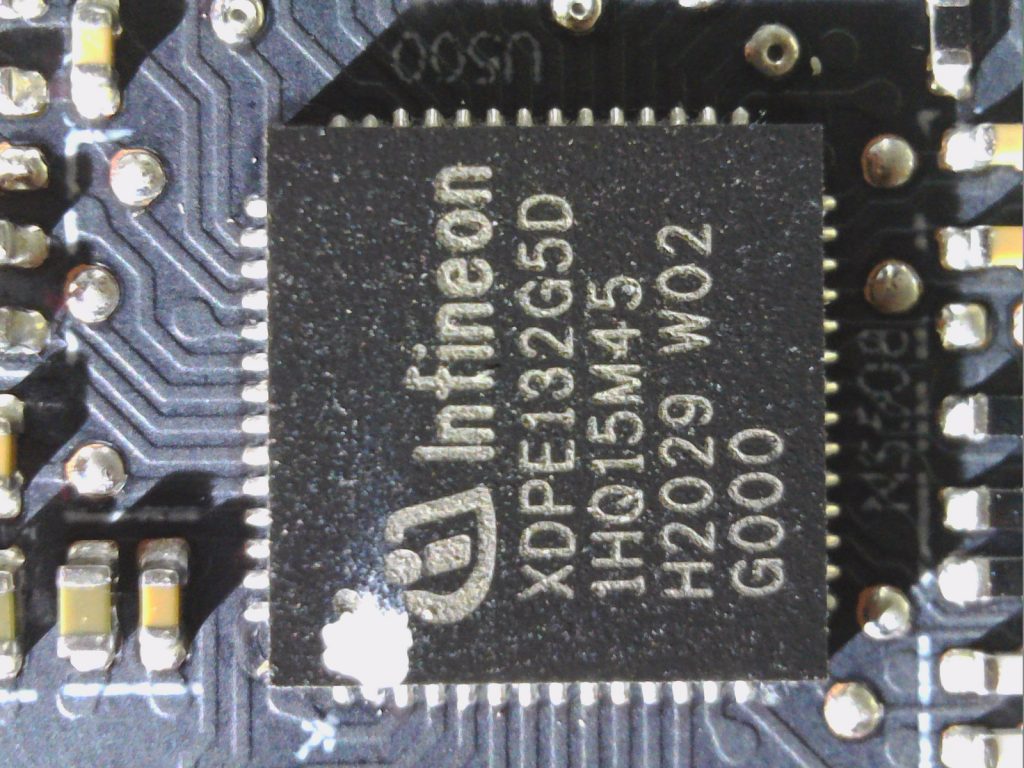 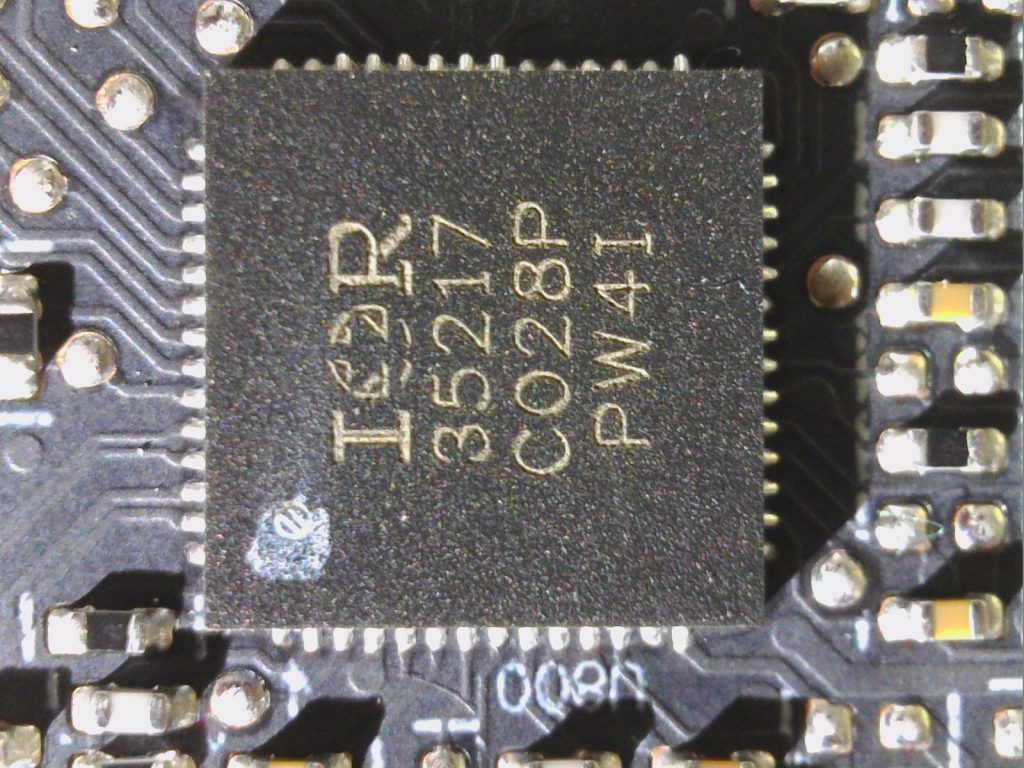 The TDA21472 also features a deep sleep power saving mode that greatly reduces power consumption when the multiphase system enters PS3/PS4 mode. This certainly explains the very low idle load, which both new Radeon cards produce. The used coils with 150 mH are quite decent, but sometimes they buzz quite audibly. AMD uses a total of 8 GDDR6 memory modules from Samsung with 16 Gbps. 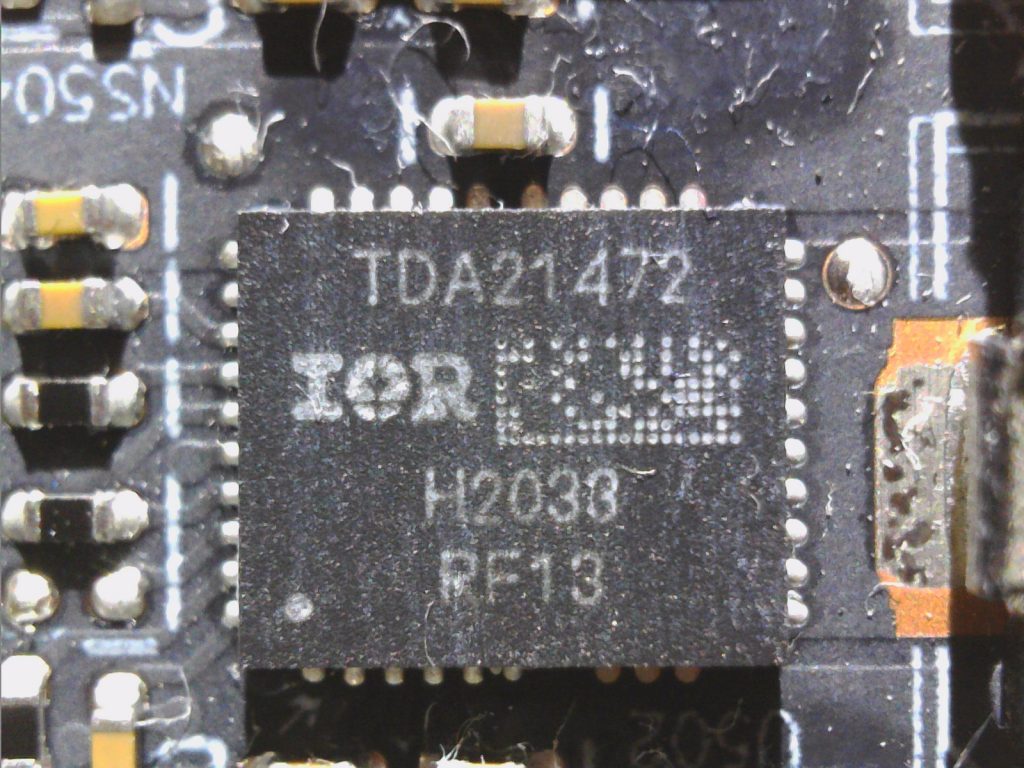 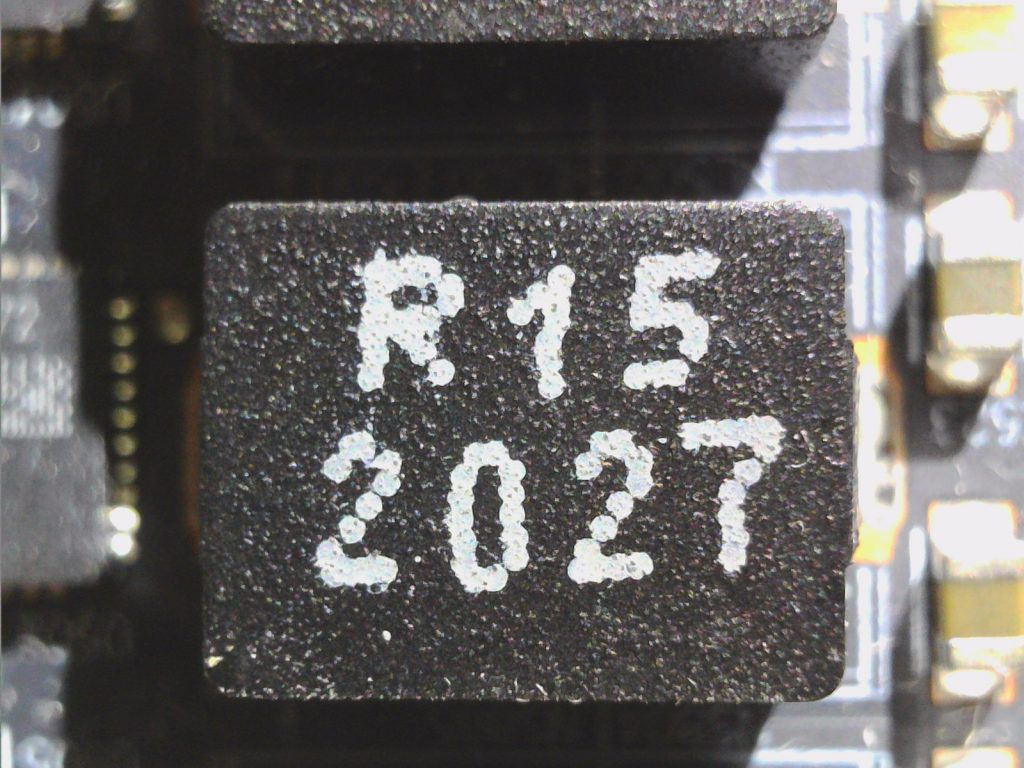 The back is quite tidy and you won’t find any SP or POS caps underneath the BGA. in general, everything seems to be very high quality in most parts and otherwise at least very functional equipped. Instead of elaborate design stunts, the focus here is on solid home cooking, which can really please.

AMD relies on a large vapor-chamber and extremely flat blackened copper composite heat pipes. Between the bottom of the chamber and the GPU there is again the phase change pad from Hitachi known from the Radeon VII and the Radeon Pro cards instead of heat conductive paste. On top of this is the large finned aluminium heat sink with the blackened, vertically arranged fins.

The design of the cover is smartly solved, as the direction of the outflowing air is directed. If the card is installed horizontally hanging in a housing, the exhaust air does not hit the side wall straight, but instead mainly reaches the top (air duct principle), so that it can hardly be sucked in again by the card. A bit tricky, but very effective. This air is pushed by the three 8-cm fans, each with 9 rotor blades, which open out into a circumferential ring.

The backplate is purely optical in nature and it will be exciting to see if anything can be optimized here. That’s what the Pad man will find out. Soon. All in all, a rather conservative solution is used here as well, but with clean implementation.