Summary of the gaming performance: Rasterization

Depending on the selection and composition of the games, the Radeon RX 6800XT and the GeForce RTX 3080 FE are more or less close together. In WQHD, the NVIDIA card has an advantage of about 2 percent in this case, but it could have been larger or smaller. But it’s still always less than 5 to 7 percent if you subtract AMD games. And here comes SAM. Especially lower resolutions and if you’re more likely to drift into CPU bottlenecks, this smart memory access can almost work wonders.

Far Cry New Dawn in WQHD is the best example here in the test, where even an RX 6800 without XT can rise above itself. But it can also be of almost no use in other games if it is not needed at all. If you activate SAM and normalize the results, the Radeon RX 6800 XT is about as fast as a GeForce RTX 3080 or even a touch faster. SAM’s growth is on average around 5 percent. Again, the limitation is that it always depends on the choice of games whether and how AMD can take advantage of SAM, as it varies between no and up to 12 percent growth, depending on the application. 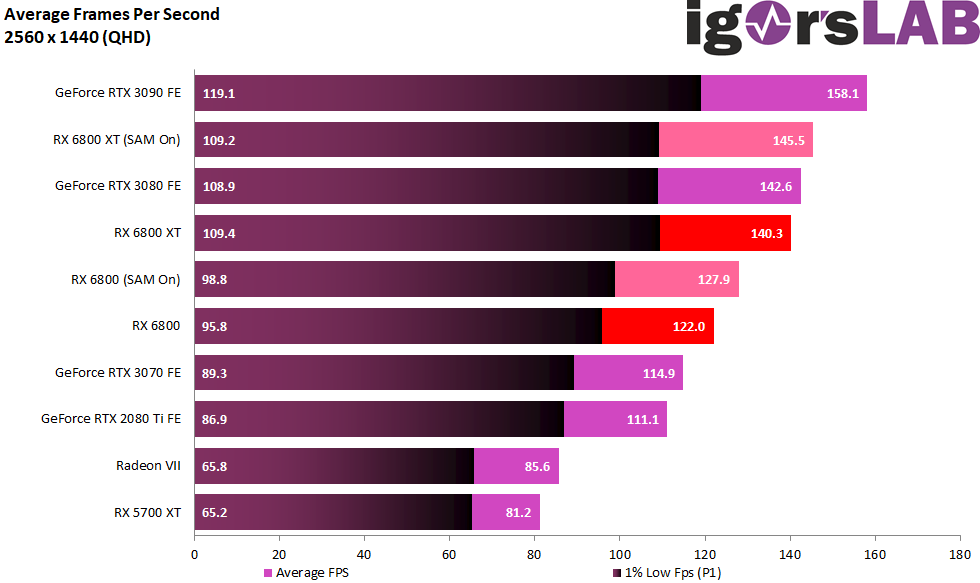 The smaller GeForce RTX 3070 FE has to admit defeat to the Radeon RX 6800 very clearly, no matter if it operates with or without SAM. Here is the often quoted performance gap, into which a GeForce RTX 3070 Ti would certainly fit well. In WQHD, I could not find any real disadvantage in memory expansion either, unless you provoke it on purpose. What the future holds, however, cannot be judged today either. Here once again everything standardized in percent with the RTX 3070 as 100% mark: 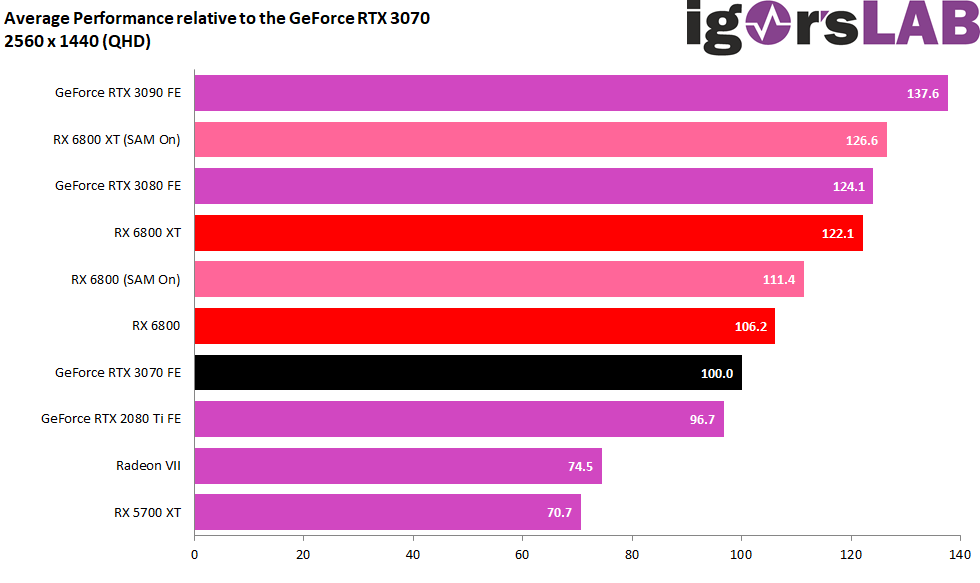 If you go to Ultra-HD, you see amazing things, because the Radeon RX 6800XT falls behind a GeForce RTX 3080 FE even without SAM. This can also be observed well in single games, because even the Radeon’s large cache can’t completely hide the very narrow memory interface. It’s reassuring to know that you have 16 GB of memory on the card, but it’s no use if you can’t fill it up fast enough at the same time. You can take it even further with 5K or even 8K, where it becomes extremely obvious, but is no longer playable anyway, on any of the cards.

One can grumble about the 10 GB GDDR6X of the RTX 3080, which is rather puny in relation to the price, as one wants, they are in the end better connected, clearly faster than the GDDR6 memory and one does not come also so fast into the bandwidth limit. With SAM it can compensate AMD to a certain extent, so that in the end (but only with SAM) there is even a perceived equality. Without however it definitely does not work. 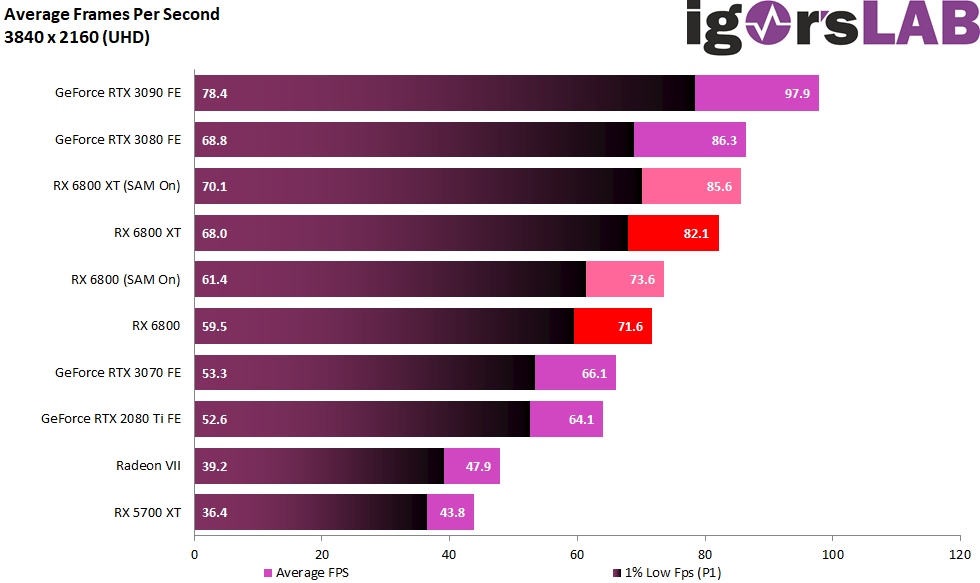 In percent the GeForce RTX 3070 FE is even further behind the RX 6800 than in WQHD, because the GeForce also only uses GDDR6 and a rather narrow 8 GB memory expansion. This almost always takes its revenge in Ultra-HD. 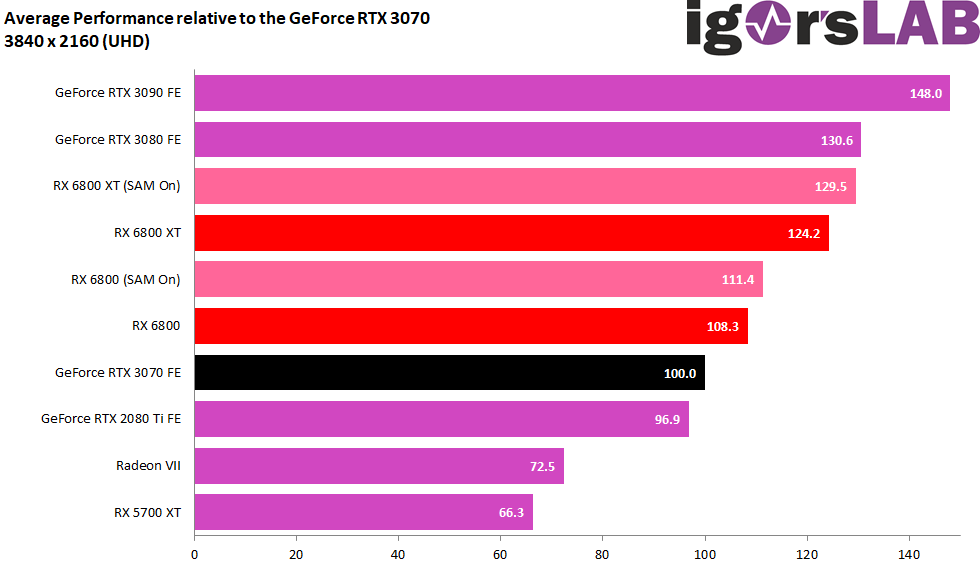 We are left with the realization that there is a de facto equality between the Radeon RX 6800XT and the GeForce RTX 3080 FE, which couldn’t have been achieved without SAM. Since this feature costs virtually nothing (except to implement it), NVIDIA and Intel have already announced that they want to use the Resizeable BARs in the future as well. Once again, it is regrettable that SAM can only run on the current Zen3 CPUs in conjunction with the B550 or X570 motherboards, although it would certainly have been technically possible to solve it differently and, above all, across generations. That’s a pity, but I wouldn’t be surprised if there will be some more of Lisa’s soup ladle here when it comes to better customer retention.

The RX 6800 is almost the more interesting card of the two Radeons here, because the possible performance increase through overclocking, the clearly higher efficiency and finally also the distance to the GeForce RTX 3070 make it a kind of lone fighter, which is currently quite lonely, because there is enough air both up and down and real opponents are scarce.

Now let’s get down to raytracing.  In order to achieve at least frame rates of 60 FPS and better on the Radeons, you have to limit the resolution or the quality of the effects enormously. However, in order to be able to make a visual judgement, one should never set the effects too low. That’s exactly why I only tested in 1080p. Here one misses generally and very painfully things like DLSS 2.0. which could have accelerated the ray show. AMD feels the same with the RX6000 cards as NVIDIA did 2 years ago with Turing: more beautiful dying in the game, but in slow motion.

Yes, it works with DXR as well and if you reduce the settings just far enough, it will work in the playable area as well. But it is not really convincing when even a GeForce RTX 3070 without DLSS of the RX 6800XT sits in the neck. I deliberately tested an old game, a slightly newer one and a completely new game – it was always the same problem. Without DLSS, raytracing even NVIDIA is currently not entirely happy with ray tracing when playing in WQHD or even Ultra-HD. With the Radeon cards these resolutions only go at a snail’s pace. 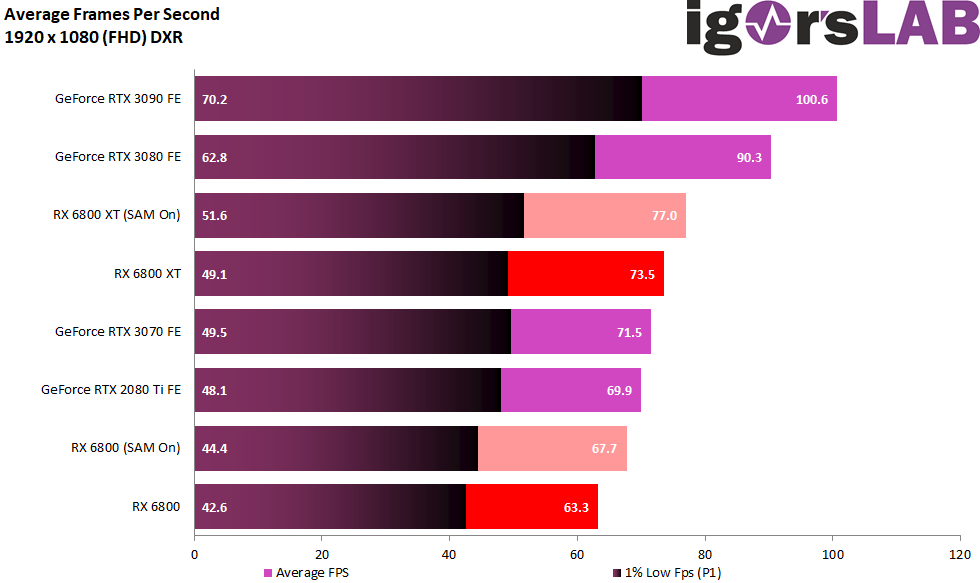 Once again, everything in percent with the GeForce RTX 3070 as the 100 percent mark. SAM can help amazingly well here and it is again 5 percent more than without. But one is even 20 and more percent behind the RTX 3080 FE in 1080p with the RX 6800XT. AMD will have to take another look at this, because it is far from being really performant. 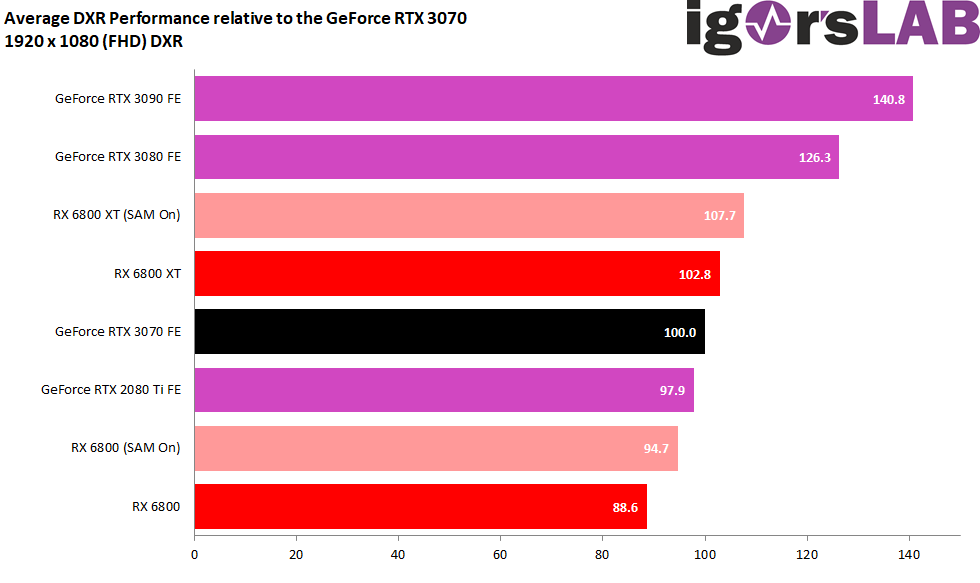 I don’t know if it was just an illusion of the senses, but subjectively, especially in Metro Exodus (campaign) in closed, dark rooms with lots of small light sources, I felt that something was missing from the DXR result of the Radeon solution, or that the effects were a little simpler. Also some reflections and shadows were not completely identical, although the function of raytracing as such would have implied this. If there is anything at all and if so, what exactly is missing, one would have to test again in detail, because unfortunately there was no time left for that.

Performance in the productive area

For those who miss the right tests here, I have to add a little disillusionment, despite all the euphoria about the gaming performance. I was glad that with the third BIOS of the motherboard the gaming tests were stable and error-free even with SAM and UEFI-only. I already had an extra article on this. However, I don’t want to break the bar over two cards here, which often enough suffer from the not-yet-perfect drivers.

Render programs like Luxrender suffer from various driver bugs, the new encoder didn’t work in Adobe Premiere the way I wanted it to, and the real-time preview of the timeline was mostly disappointing. In Blender is a RTX 3070 with OptiX Galaxies away from the RX 6800 XT, which only relies on OpenCL and it came there also to (surely driver-conditioned) problems and performance breakdowns. Even with CUDA the RTX 3070 is even faster, which made me wait for better drivers.

Apart from the performance evaluation that has already taken place, a very positive impression remains of the technical implementation of the new Radeon cards in the reference design. A very well assembled and designed board meets here a very efficient chip, which proves once more the superiority of the production at TSMC and knows how to assert itself. The load peaks in power consumption are a much smaller problem with the Radeons and should not present even simpler power supplies with unsolvable problems. In addition, there is the sympathetic LC filter in the input section, which cannot be praised enough.

The cooling performance and the associated noise development are very good or good with both cards.  The larger RX 6800 XT acts even more confidently and quietly, while the Radeon RX 6800 has to make do with a somewhat weaker cooler in a dual-slot design. This was also solved in a sovereign way, but is a little bit louder in the end. Despite everything, the whining is at the highest level and I’m not sure that all board partner solutions can top this. I’m afraid, especially with the RX 6800 XT, rather runaways downwards.

The Radeon RX 6800 XT with a RRP of 649 euro is currently a good and above all more economical alternative to the GeForce RTX 3080 for gamers. This is going well until DXR comes into play. This is also still usable, but due to the lack of a DLSS alternative and because of the lower RT performance one has to accept significant cuts. Those who are not affected by all this, because they see their priorities in pure rasterization, can access it without hesitation, if availability permits. Because of all the imponderables, even with the feature set, I don’t give any explicit purchase tip for the RX 6800 XT, but I do give the performance booster, because this card is really fast and at the same time cheaper and more efficient than the competitor’s product.

The Radeon RX 6800 with an RRP of 579 Euros is just crying out for a purchase tip, as it doesn’t have any real competition at the moment. Whether you want to save the 70 Euro surcharge on the RX 6800 XT is something everyone has to decide for themselves. The GeForce RTX 3070 is 80 euro cheaper, but in total also slower, but at least similarly efficient. For Ultra-HD, the graphics card is a bit out of breath, but until WQHD it’s a really good choice, as long as you don’t have to work with it and rely on the wrong applications. But I am sure that the drivers will be improved.

The bottom line is that AMD has finally regained its footing, and the new self-confidence is of course also reflected in the price, but it is difficult to criticize that, because all companies are committed to their own investors. So technically, AMD delivered. Now all that’s left to do is make the delivery to the store. In the end, this is probably the only true unknown. We have already dismantled the test in detail, now we only count objects for sale in the required number of pieces.