After one year of Ryzen 3000 (“Matisse”), the replacement of the current Ryzen 5 3600X, Ryzen 7 3800X and Ryzen 9 3900X is approaching, by adding MTS2 (internal for “Matisse Refresh”), an improved XT replacement, which should make waiting for Ryzen 4000 (“Vermeer”) a little easier. And probably also a little bit the wallet, because you are aiming for the same EIA as a year ago. Changing of the guard sure, but not a real changing of the guard either. More likely it’s the hastily-convened late shift, while Intel’s 10. Generation on night shift awaits the dawn.

Today I’m testing the Ryzen 9 3900XT, which was kindly provided by AMD. The reason why I didn’t sample any smaller CPUs this time must have been the amount of CPUs that were available at all. So I have to design this test a little bit differently and adjust its content. In today’s test, I logically position the new XT model against the old one, against a Ryzen 9 3950X and also fairly against an Intel Core i9-10900K. All other CPUs in the test, including the motherboards, are from my own stock, so there are no dependencies here.

A total of three CPUs are actually ennobled to the XT version, whereby the old X versions are to continue running. In terms of price, the XT models are based on the EIA of one year ago, which creates a little shadow. Because the street prices speak a very clear language and the distance to the new, old EIA does not really make the slightly improved XT Troika more attractive. If the customer will be presented with an XT for an X, whose surcharge is questionable, I can only answer this question for the Ryzen 9 3900XT. But I’ll do my best, I promise!

Binning or a little more?

For the new 3000XT processor family AMD advertises an increase of the turbo frequency by 100-200 MHz at the same power consumption and with up to approx. 4% more performance. This can be confirmed in a general way, without spoiling it already. AMD states that this is due to the use of an optimized 7nm manufacturing process, but leaves the specific answers open. One can only assume that the improvement could be due to a minor BKM or PDK update, which now allows TSMC to tune the entire process to a better voltage/frequency curve.

I have tested that it is not only a pure binning with my own manually selected Ryzen 9 3950X, which is said to have the best factory binning currently available. I used this CPU in 3+3 mode as a “real” twelve-core CPU and also lowered the respective voltages slightly. So this synthetic 3900XT copy had about the same power consumption as the later tested original and also looked very similar in clock speed. Similar, but not anymore. Because in the course of the very extensive benchmarks, there were reproducible outliers again and again, where up to 10% and more additional performance was created, which can hardly be explained in this way. But I will come to that in a moment with the benchmarks.

In order not to limit the CPUs thermally by the test setup and to enable boosting algorithms such as Thermal Velocity Boost, which are fair to Intel’s improved boosting algorithms, the Alphacool Chiller Ice Age 2000 comes into play again together with the XPX Pro water block with the necessary brackets, because water at a constant 20 °C is a solid basis for consistent results. 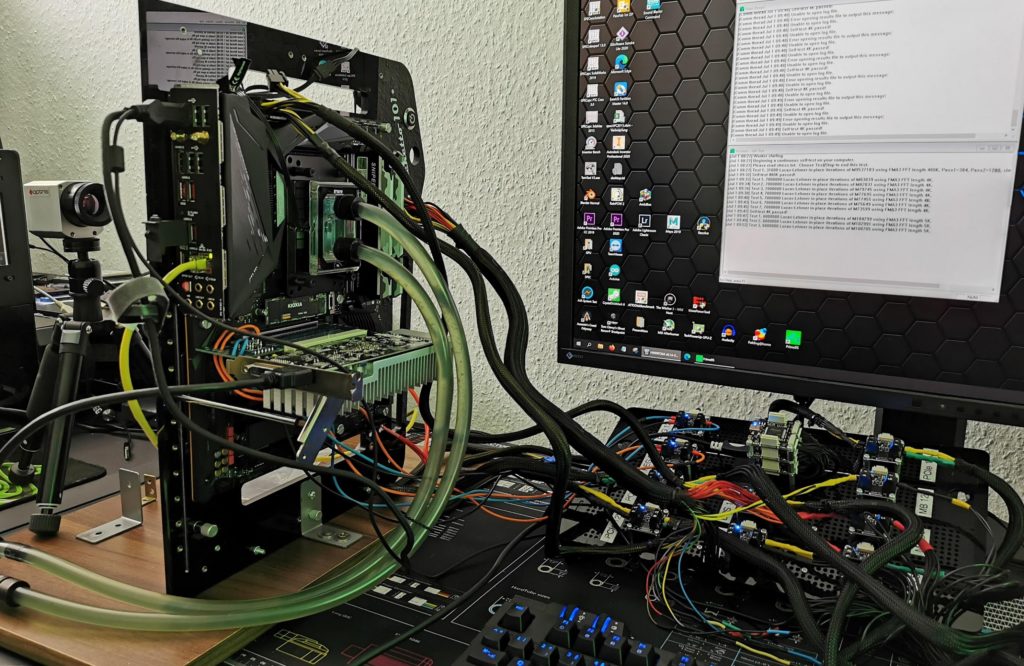 Here once again the tabular compilation of the test setup:

Ryzen 9 3900X vs. Ryzen 9 3900XT remeasured – What remains but a little extra clock rate and extra power consumption? Not much…
PCIe 4.0 and PCIe 3.0 – Difference between x8 and x16 with the fastest cards – Where does the bottleneck begin?