You have to look hard to find the advantage of the Ryzen 9 3900XT over the Ryzen 9 3900X. The longer such a session runs and also includes different scenarios and a very different thread load (number, load level), the smaller the actual differences become and you have to look very carefully. In order to remain as meaningful as possible and not just cherry-picking, I used the SPECwpc, a benchmark suite that is very easy to reproduce. The applications selected especially for this test run for a total of almost exactly 90 minutes. This should easily be enough for a good average calculation.

Nevertheless, we would like to refer to the actual launch test “Matisse Refresh – light and shadow, sidegrade or real gain? versatility test from old against new and all against Intel“, which you should of course first read for a better understanding. Because I don’t want to completely roll out all the background information and the test system again, but simply continue where I left off recently due to time constraints.

The watch shows an average power consumption of 86.7 watts for the Ryzen 9 3900X and 91.3 watts for the Ryzen 3900XT after the 90 minutes.  This is about 5% more power consumption over these special 90 minutes. However, the performance increase, normalized across all applications, was only just under 3%. Put more in and get less out proportionally? Relatively speaking, yes.  Whereby the power consumption of the two CPUs results from a very well-balanced mix of differently demanding applications, which also takes into account the deliberate partial load scenarios and thus also reflects everyday life quite well. Let’s start with the Ryzen 9 3900X. In light blue we see the average clock of all cores, which does not exceed 4279 MHz at the peak, i.e. always just below 4.3 GHz. The yellow curve shows the beat of the fastest nucleus in the comparison. With 4650 MHz as the maximum (and always very short) value reached, the Ryzen 9 3900X is still just below the 4.7 GHz mark, but still surprisingly high. But this only works if all other cores clock in the direction of 3.6 GHz. We also see that the clock rate of a single core only turns out so high when the power consumption is significantly below 50 watts. But this works just fine with simple CAD applications and DirectX or OpenGL preview in realtime 3D, if you don’t have to calculate extra large. But then a 4-core, such as the Ryzen 3 3300X, would also be sufficient. 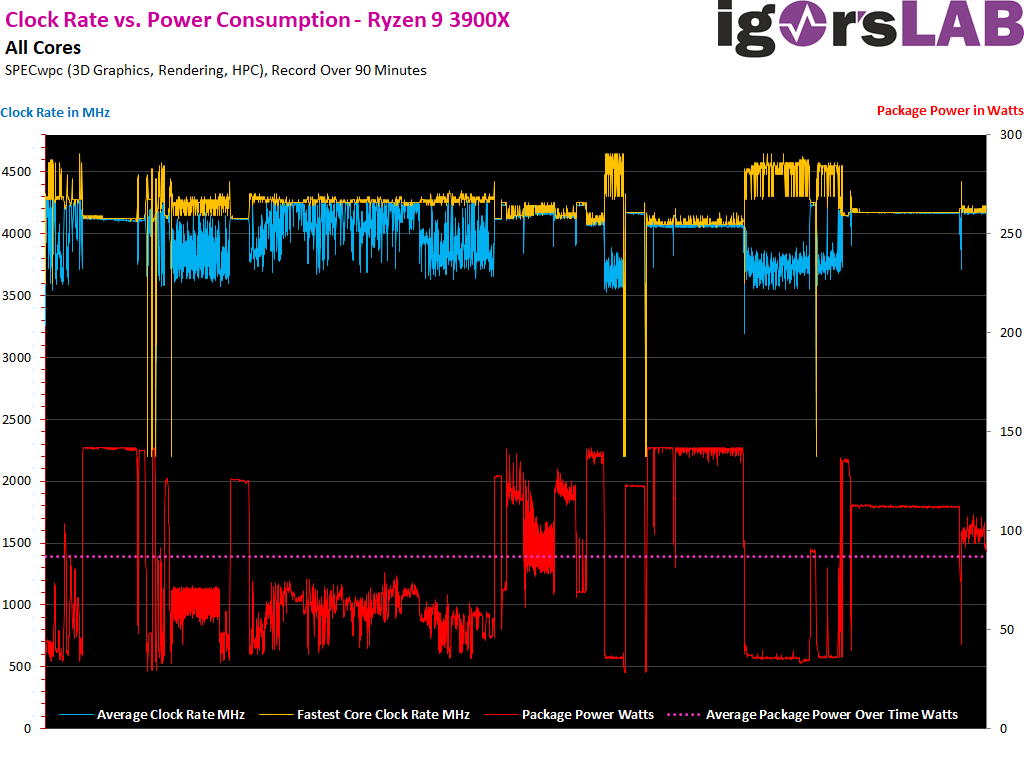 At first glance, the Ryzen 9 3900XT performs very similarly. But with 4.73 MHz it is even 100 MHz faster at the maximum clock rate (yellow) and the average of all cores now goes up to 4.31 MHz, which is also a bit higher than on the Ryzen 9 3900X. The load behavior is very similar and the performance boost of the XT is only achieved in applications where only a few cores are really used and even then not fully utilized. The bottom line is that you put more into it to get at least a little more out. However, real progress looks different. 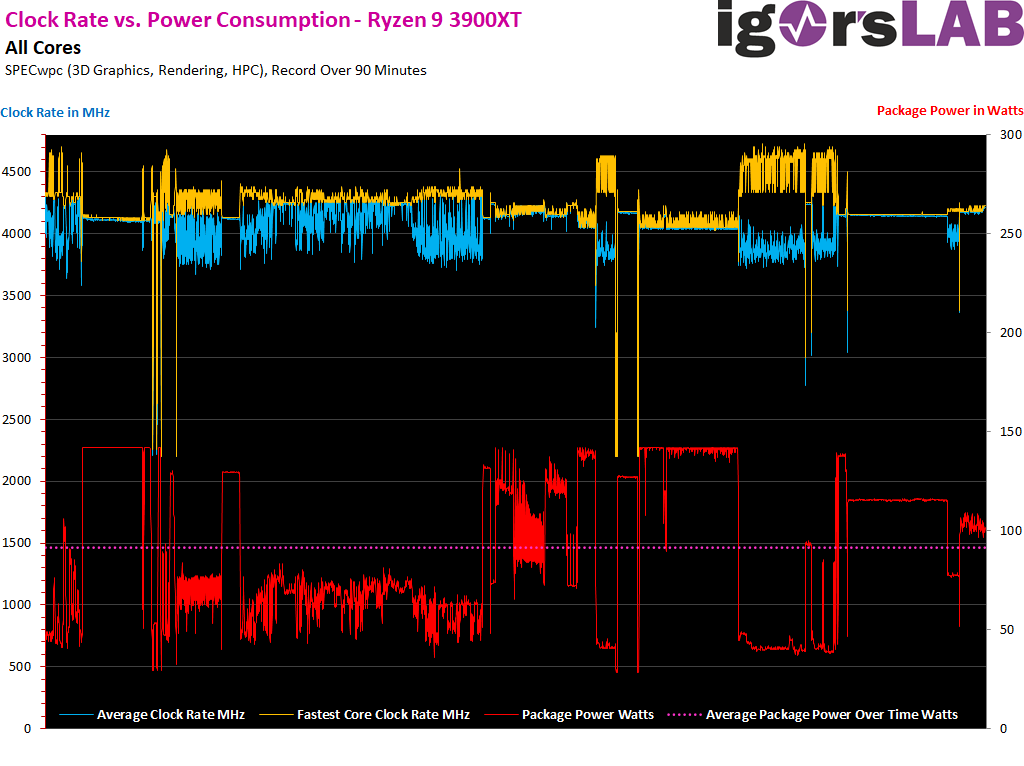 What does the comparison of beat and voltage do?

Now I have turned the approach of the evaluation upside down. The X-axis now simulates the clock curve of all values above 4 GHz, because the basic clock is rather uninteresting for the observation. I picked out the best and worst core over the entire course of the game and compare them. Because what interests me is the behaviour of the clock frequency to the core voltage. Now it gets a little tricky. The blue and purple curves on the X-axis first show the share of the respective clock stage in the overall course (the values are on the right Y-axis). The left Y-axis is for the core voltage values (in green and red).

Now I have summarized the respective voltage steps and compared them with the clock curves for the length of their occurrence. You can see very well from these sawtooth curves that the voltages of a certain frequency step also differ greatly in the length of occurrence and the height. I find this quite remarkable, because it also proves that there seems to be no fixed voltage specification for the individual cores for the respective frequency, but that this voltage is subject to many other factors, if at all. This is exactly where the Ryzen 9 3900XT differs more from the 3900X. On the one hand, we can see that, in addition to the higher final frequency, there are also significantly shorter individual gradations in the clock frequencies in the medium load range. At the same time there are also shorter voltage gradations. But that is the only (measurable and here visible) difference, which in the end does not really bring (almost) anything except a higher power consumption. 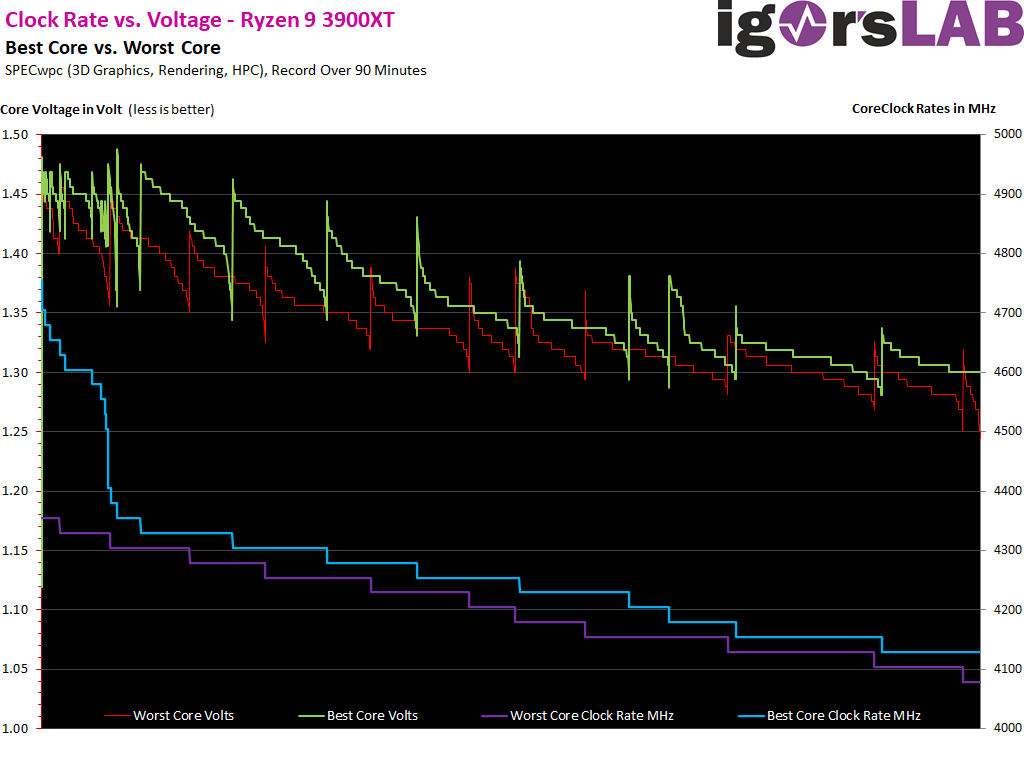 So it can be summed up that the Ryzen 9 3900XT is actually nothing different from what I described in the launch article: A slightly improved CPU whose maximum clock rate can now be extended a bit higher, but which in return requires a higher power supply from the socket within the exact same architecture. The sense of such an upgrade, if you want to call it such an upgrade, unfortunately does not become clearer with this. All in all, it is certainly a small benefit that one likes to take along, but which one hardly needs. However, the price range for this is currently still far too high, unfortunately.

AMD Epyc Milan Leak – Three early Genesis samples listed in A0 stepping along with core configuration and clock rates | Exclusive
Matisse Refresh – light and shadow, sidegrade or real gain? versatility test from old against new and all against Intel