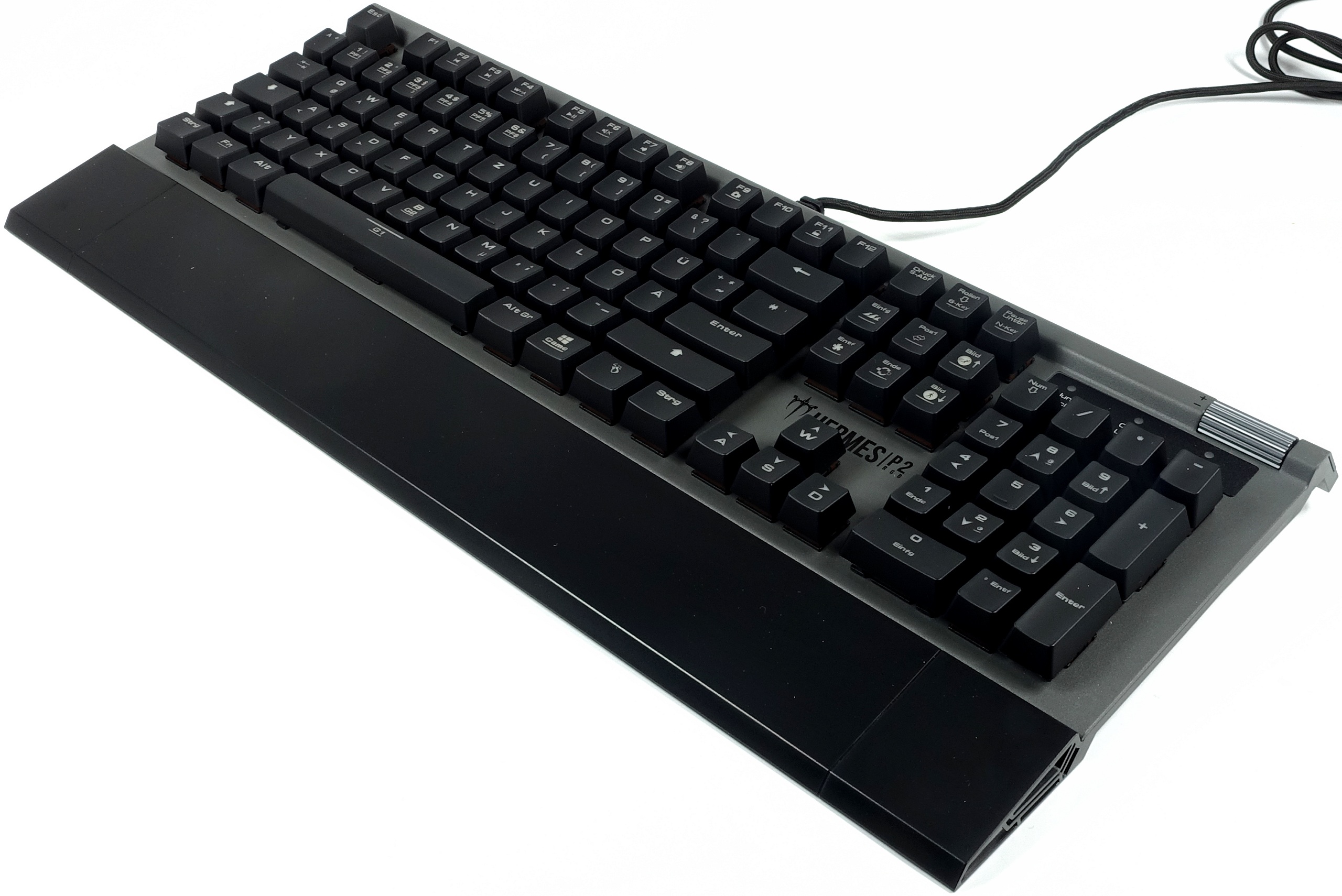 Beautiful, optomechanical keyboard switches were already the very last cry last year and you could already admire the Switches of A4tech (Light Strike "LK") and Adomax (Flaretech) in finished products at computex 2016. But the same thing happened with the classic, purely mechanical switches: third parties take up the idea and produce similar products. Whether one takes the opportunity to improve the existing constructions or only to secure them under patent law, which would otherwise have been too similar – it will probably amount to both in the end.

Gamdias uses a rather smart new solution of a larger supplier in the Hermes P2 RGB, so I took this as an opportunity to take a closer look. With approx. The keyboard mechanic is not really in very cheap waterways, but if you want to be beautiful, you have to suffer. Maybe I also find an ultimate wine that I could have overlooked at first glance.

The scope of delivery consists only of the keyboard and a cap puller, the driver software must first be searched and downloaded by yourself. However, this is not a broken leg and is now common practice. Who already has a CD drive and an extra stick would have to be repriced. Then it's better, especially since the manufacturer can keep the driver software up-to-date.

Visually, this rather large keyboard is somewhere such a middle thing of subdued gaming baroque and incipient reason. The metal pad on the body, painted in anthracite, may please, but the plastic of the base body, on the other hand, does not really look very high quality. It is the usual average, but it is no longer a deut. The division of the buttons is standard in class, but the whole thing does not correspond to the real DE layout, but rather to the US design. The rest is again unexcited average. But there is nothing missing.

The volume scroll wheel integrated in the case, on the other hand, may please. Additional keys can also be occupied. However, not as separate macro keys, but in third-party assignment, which is a bit annoying. Unfortunately, this shift also affects the other multimedia keys, which were not executed in a dedicated way. This is a pity, but it is also due to the space that the OEM has given this model. As a brand, you can hardly get any further with extra tooling.

The palm rest, you can see it nicely from the ground view, is firmly flanged and can not be removed, which in my view is a big disadvantage. It also contains the stoppers made of glued-in rubber against possible slipping.

What is also not optimally solved are the two stands, which should actually make it possible to increase the keyboard inclination. However, the resulting angle is still far too low for e.g. ergonomically good and relaxed writing. It's the usual gambler's plate, nothing to work with. Here, however, one could certainly make improvements.

Before we get to the buttons, quickly again the three direct side views to illustrate the installation problem: 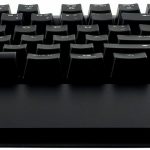 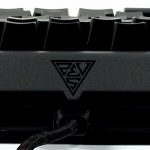 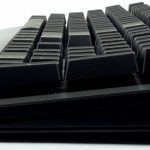 Special features of the optical buttons 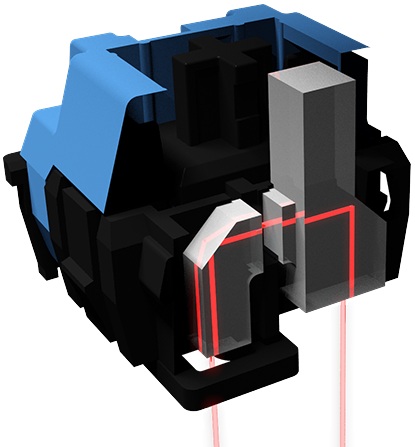 Gamdias uses its own OEM solution, as mentioned at the beginning, which is quite smart and has a certain charm. Smart because RGB background lighting and the diode for the optical trigger have been simply combined.

The translucent use of the "light guide" serves both for the backlight as well as for the actual trigger, as you can see well on the graphic on the right.

In practice, this looks like the pictures below show. You can also see on the printed circuit board where the emitting diode (LED1) and the photo sensor (PT1) are located.

The hole in the middle of the board ensures that the button is taken up, which can be completely removed and reinserted. 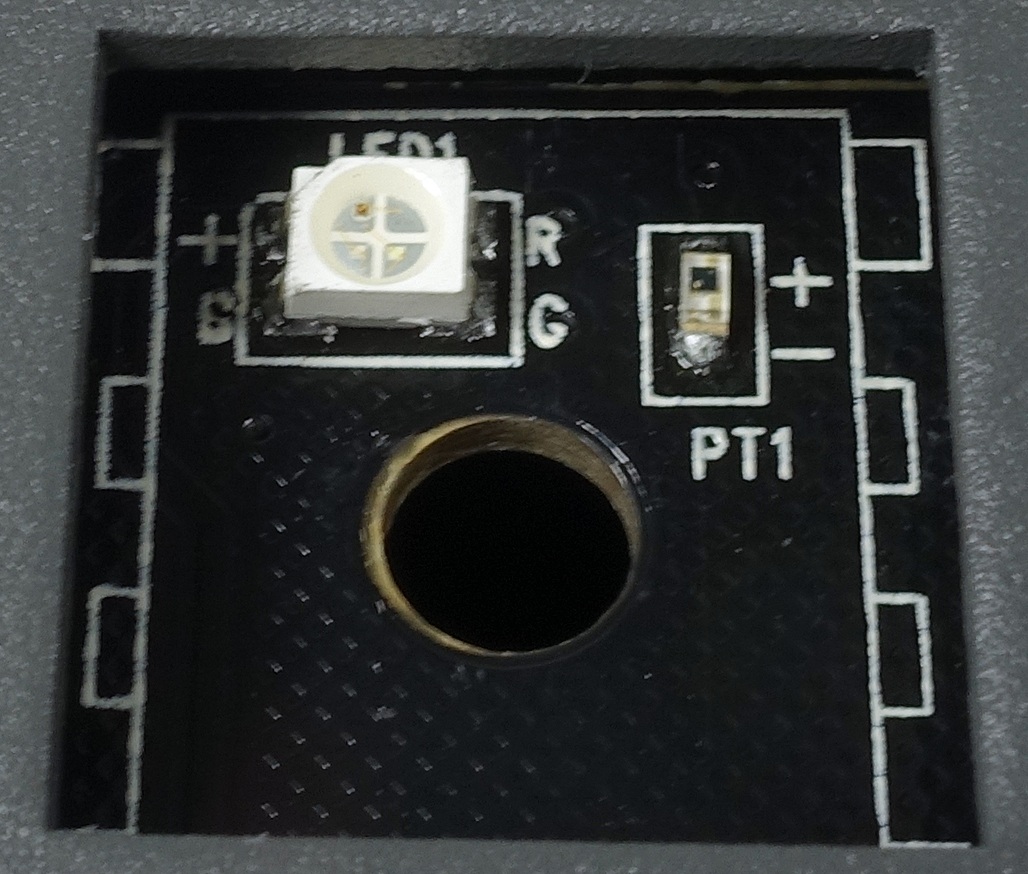 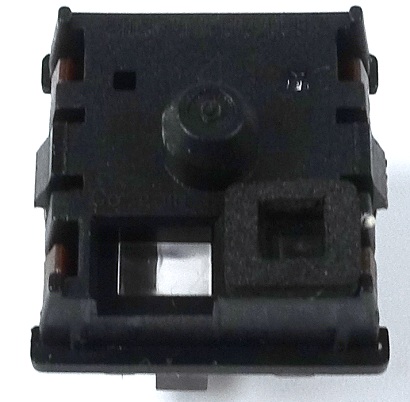 The top of the light guide also looks like a small stray lens, but the illumination of the keycaps is not really optimal. However, the OEM has skilfully avoided shipping too many labels to the bottom row. The key holder is standard, so that other caps could also be used. Modding knows no bounds by now. 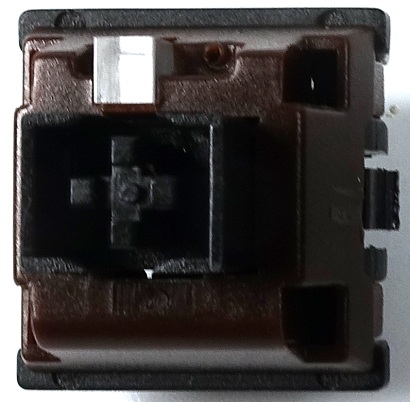 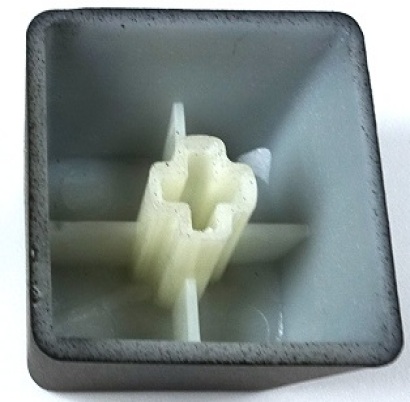 After all, Gamdias hasn't let these switches on him, as we know it from some other brands. Instead, you will find only a small logo of the supplier on the body of the switch, which indicates Togran. This is a Chinese supplier and the discreet "d" on the counter's housing stands for "DareU", the manufacturer's gaming line.

I didn't notice anything negative about its use. In direct comparison to Cherry's MX Brown and Kailh's equivalent probes, these buttons performed similarly in terms of tactile behavior, spring characteristics, and trigger point. In the blind test you don't really feel or hear any big differences. This in turn speaks for the solution of Gamdias, because smart in this case also means that you have saved costs at the OEM. SMD assembly is cheaper, assembly is easier and expensive mechanical contact surfaces can also be dispensed with.

When Ivanuschka propellers – high summer air movements in the east
The Crew 2 – a further test with frame times, variances, memory and CPU usage