As I could learn from meanwhile three contacts at the manufacturers and suppliers unanimously, the so-called Qualified Samples (QS) differ again from the now delivered chips for mass production (MP). So, as correctly reported yesterday, the GA102 will become the GA102-202 or GA102-302. The beta driver 470.05, which is so interesting for the miners and also contains the required CUDA drivers, will thus no longer work from day one. The good news is that the RTX 3080 Ti is already ready for mass production. Only different.

Interesting is the way to the final version and the testing in the labs of the manufacturers or their contract manufacturers in the last days. While the older QS of the RTX 3080 Ti still ran without complaint with the old driver and full hash rate, the boards with the new chip from the MP definitely don’t run anymore. Interestingly, the device ID should even remain the same, so that mass production firmware can be flashed to the old QS without complaint and vice versa. But even if the flashing still works without problems, in each of the variants (old to new or vice versa) there are problems.

Just saying: new firmware of the MP on the old QS runs for graphics, but the beta driver does not do it for CUDA and ETH, which should be the lesser evil for many though. If you flash old firmware to a new chip, the screen will remain completely dark. To protect the sources I will not write in detail how these differences look like, but it turned out to be more or less the same in all attempts of different participants. It’s actually almost like the Turing cards with A-chips back in the day. Almost, because it is fundamentally different in consequence.

If both GPUs have the same hardware ID (PCI Device ID), then the override sub parameter is easily enough for flashing if you play flexibly with the board ID, as you do now. The A and non-A chips, however, had different device IDs and the firmware could not be cross-flashed for the life of me. Now it does work with the firmware down, so in one way mode , but there is clearly another parameter that completely limits the functionality when upgrading to the newer chip. 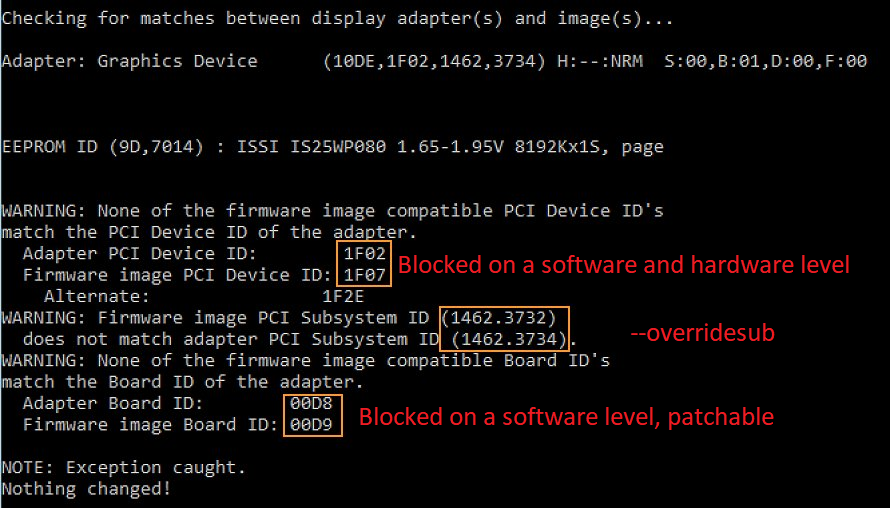 The whole thing is insofar important and interesting in the technical implementation, as one could make uniform BIOS upgrades possible here also for older models, thus e.g. with a card GA104-300 on the firmware of the GA104-302 (in order not to fragment), the reverse way is however trickily obstructed. The fact that the device ID remains the same has the advantage that you do not have to extend the drivers separately. So here’s hoping for gamers that they use more than just the hardware strap as a backup this time around. Otherwise, soldering irons will soon be sold out in the land of busy miners.

MorePowerTool 1.3.4 Online – Support for Navi21 XTXH “Ultimate”
Is the Empire striking back? NVIDIA with new chip (GA106-302) and hardware ID against miners and beta drivers!