Before I go into further details, I’d like to introduce (uncommented and unrated) Intel’s own core statements, i.e. how the company now sees itself with this generation:

This new 10nm++ process node is referred to by Intel as the 10nm SuperFin transistor design and Intel claims that the SuperFin process delivers the same performance increase as a real node step. The SuperFin design leverages the FinFET architecture by providing an improved gate process, additional gate spacing and improved spike source/drain. In addition to the SuperFin design, there are also the SuperMIM capacitors, which provide a 5-fold increase in MIM (metal-insulator-metal) capacitance and reduce the total resistance of the capacitor by 30%. 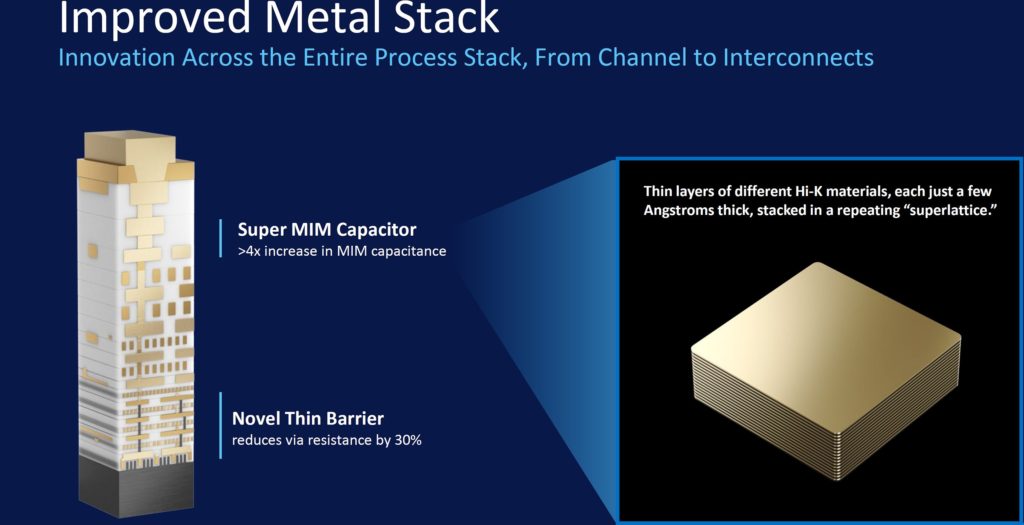 Intel also points out that its SuperFin and SuperMIM design is an essential technology to increase performance and add innovations such as improved data center connectivity. It is likely that Intel’s Ice Lake-SP will use a similar manufacturing process to achieve higher throughput. 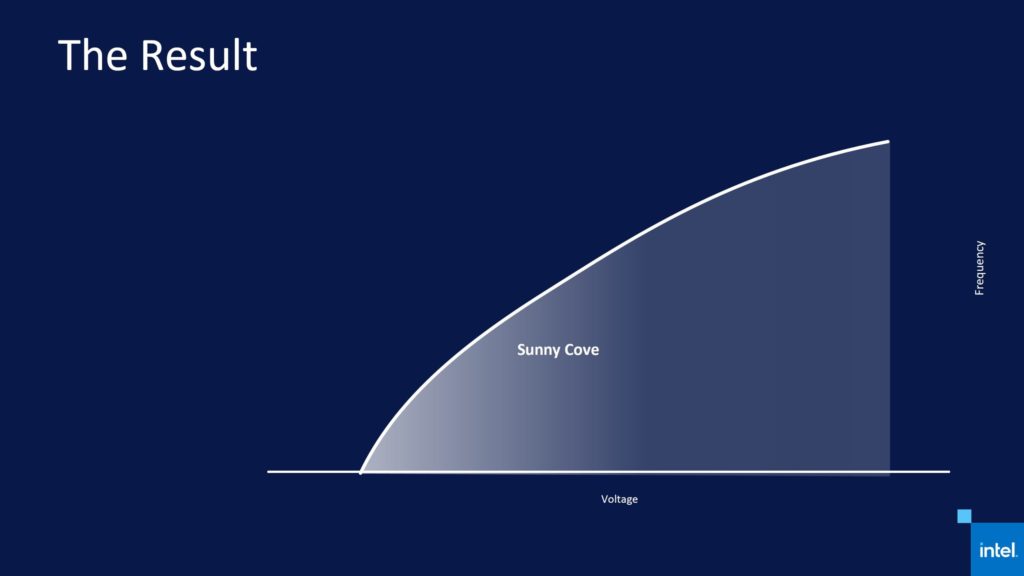 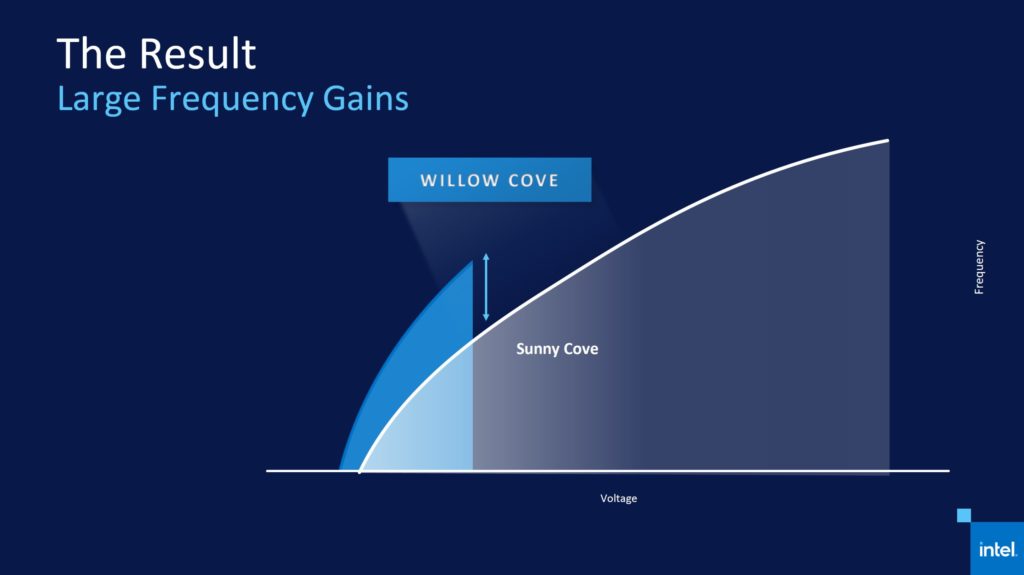 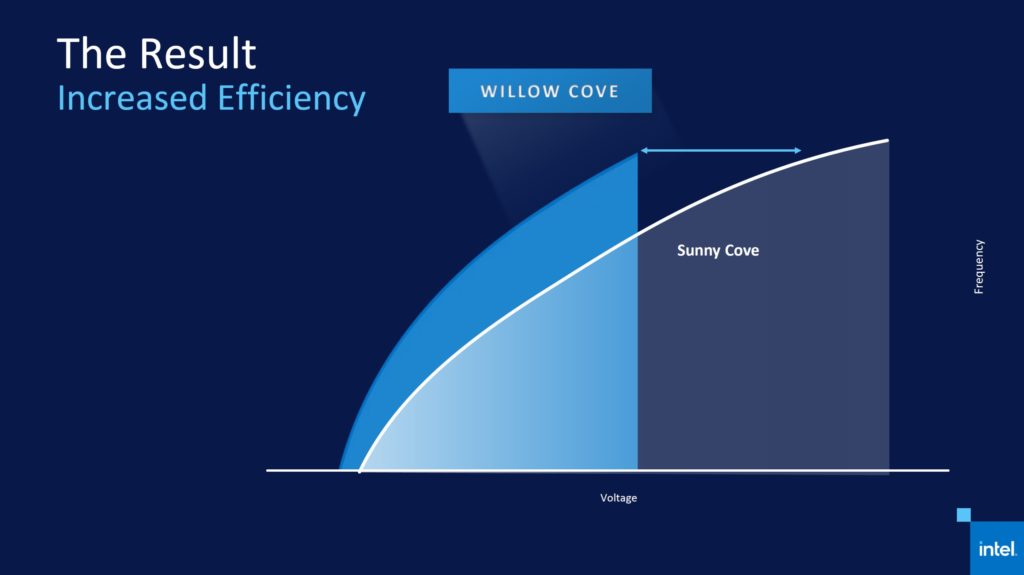 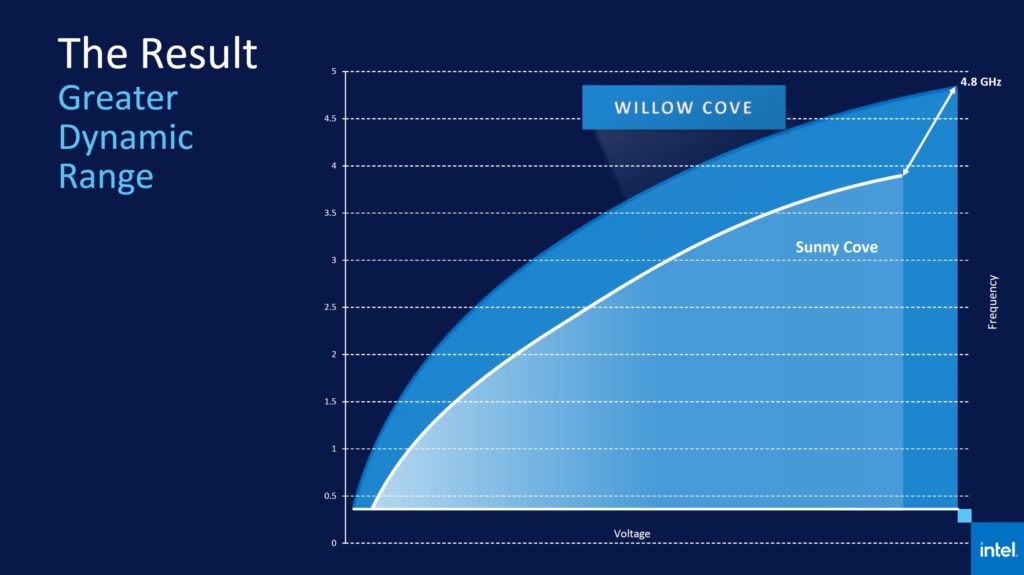 Intel also stated in the presentation that the company had achieved a performance increase of approximately 17-18% compared to the standard 10nm process node, which is the 10th generation of Ice Lake chips. Generation is used. So it shows that Intel is quite confident that its 10nm process will be able to match or even exceed the 7nm process node of TSMC used in competing AMD Ryzen 4000 ‘Renoir’ CPUs.

The next two key technologies for Intel’s Tiger Lake processors are the CPU and GPU core technologies, which are influenced by Willow Cove and the Xe graphics. The Intel Willow Cove architecture is the second newest architecture based on the 10nm process node, with the first Sunny Cove being for the Ice Lake CPU generation. 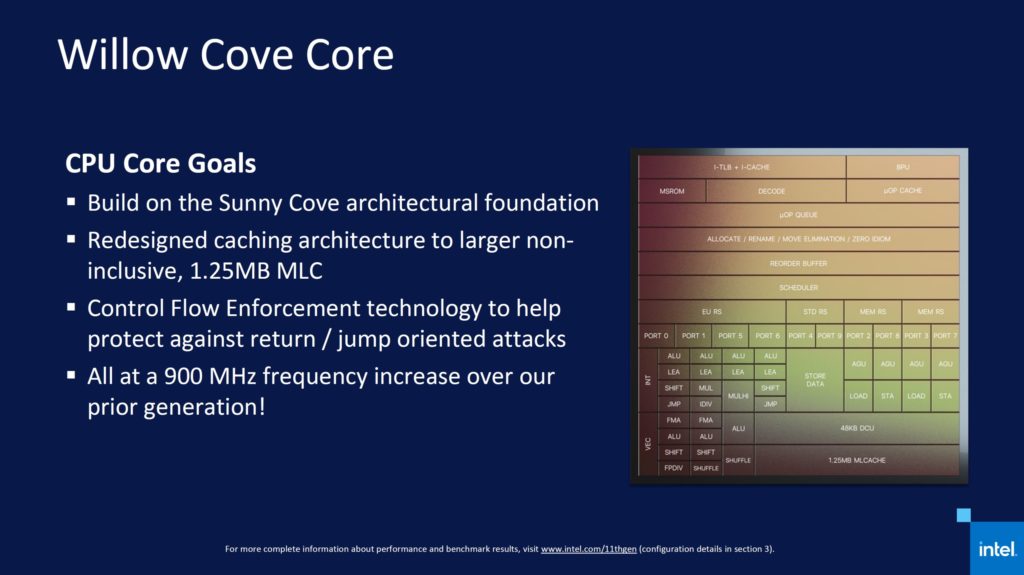 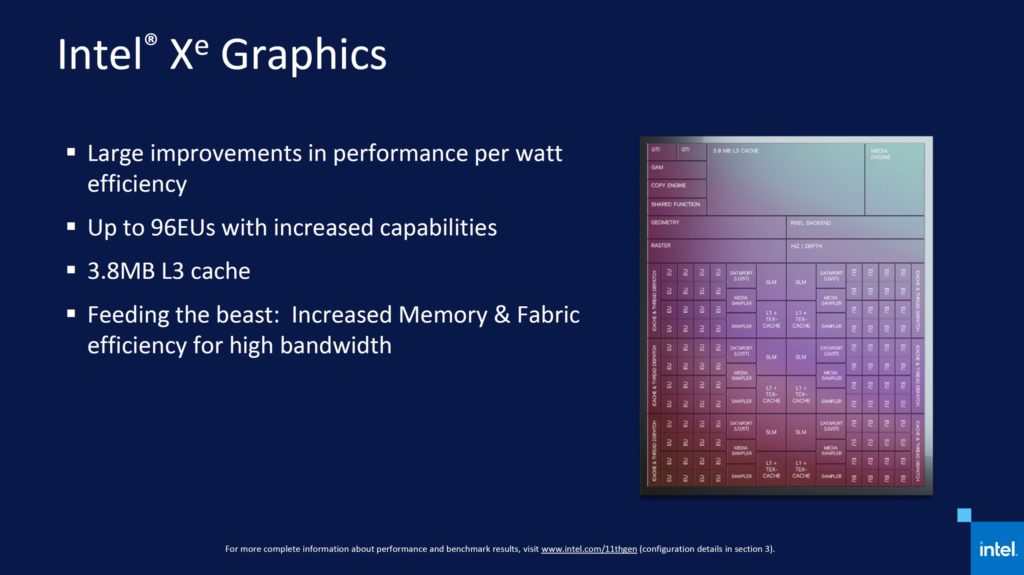 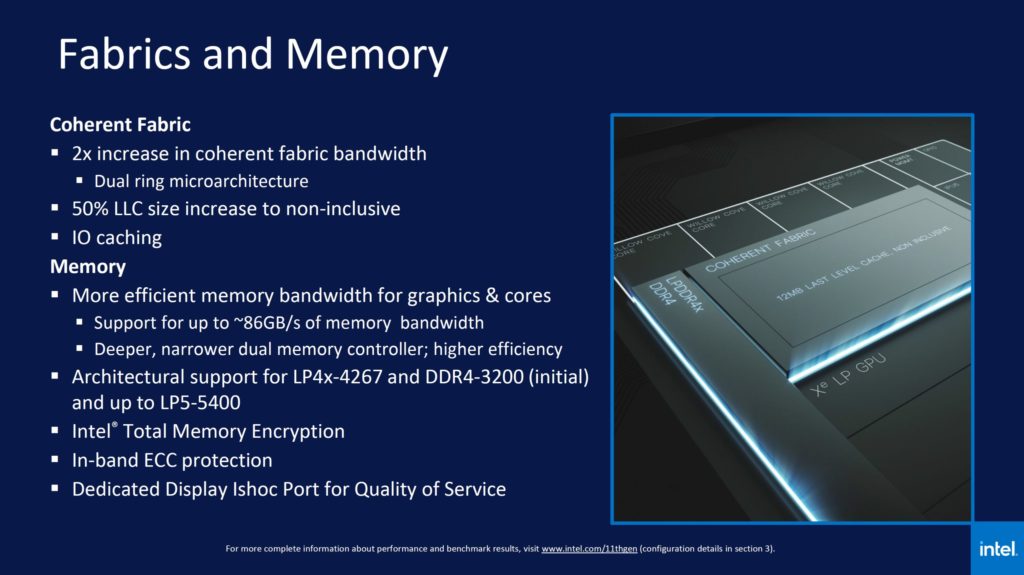 Willow Cove cores are expected to deliver double-digit IPC profits over Sunny Cove cores. The Willow Cove cores feature a brand new cache design with 1.25 MB L2 cache and 3 MB L3 cache per core. Along with the new cores, as mentioned above, we will see cache redesigns, new transistor-level optimizations and improved security features. One of the main features that Intel has highlighted for Willow Cove is that at lower voltages, much higher frequencies than Sunny Cove will be possible.

New chip, new cores and with Xe graphics everything faster?

Intel will also introduce its Xe GPUs on the Tiger Lake chips, which are expected to offer a twofold performance increase over the Gen 11 GPUs currently used on Ice Lake chips. The Intel Xe graphics architecture will support 96 execution units or 768 cores together with 3.8 MB L3 cache. 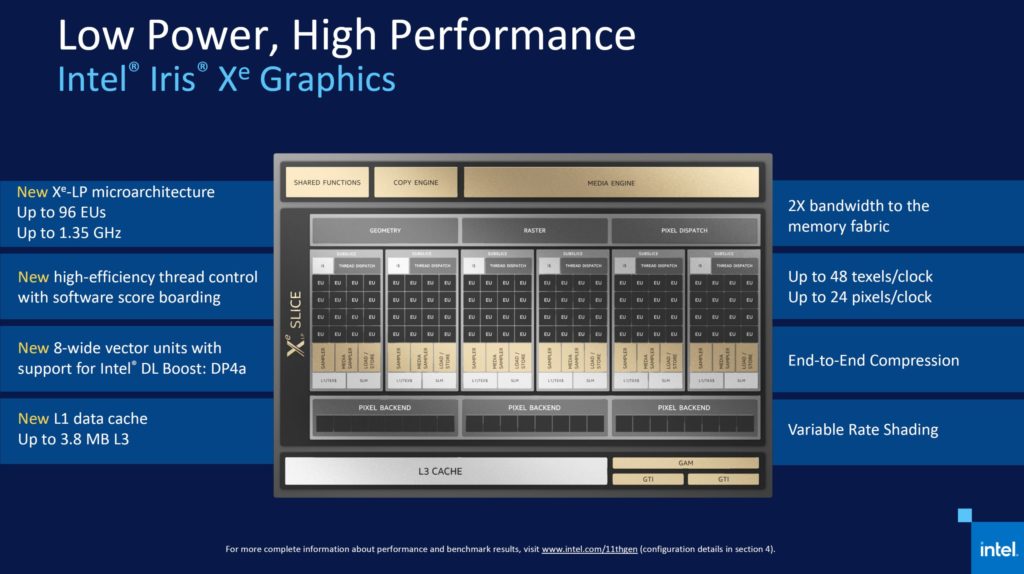 Intel has also presented a block diagram of the Tiger Lake CPUs. This block diagram mentions everything that is new compared to the Ice Lake chips and also the parts that are the same. The DDR4 memory controller, which supports speeds of 3200 MHz with up to 64 GB capacity, is very similar, as are other controllers such as SGX, Fuse, JTAG, SVID, and the display USB controller of type C with DP 1.4. The Tiger Lake CPUs have only a few blocks that are similar to Ice Lake.

The rest of the chip is brand new and this is clearly visible in the block diagram. Key enhancements to Tiger Lake CPUs include the Willow Cove cores, Xe LP graphics and media engine, 12MB L3 (load level cache), a new display engine with support for 8K displays (4 pipeline/64GB/s read bandwidth), IPU6 with 6 camera sensors (video up to 4K90, initially at 4K30) and additional support for LPDDR5 memory at speeds up to 5400MHz (32GB maximum). The rest of the blocks have at least received major and minor upgrades from Ice Lake.

The CPUs of the 11. The new generation will use a dual coherent structure for input and output on the link and are designed exclusively for high-bandwidth operations. As such, the Tiger Lake CPUs will support LPDDR5-5400, LPDDR4X-4667 &amp; DDR4-3200 MHz memory. This will make Tiger Lake CPUs the first x86 mobility platform to support next-generation LPDDR5 memory (not to be confused with DDR5 memory).

In addition, the Tiger Lake CPUs will also support Thunderbolt 4 and USB 4. There will also be support for PCIe Gen 4.0 with a full 8 GB/s connection to the memory interface. All in all, the data of the Tiger Lake CPUs sound quite convincing and one can be curious what the notebooks can really achieve.

Intel goes to the start with a total of 9 SKUs

The Intel Tiger Lake CPU family consists of a total of 9 SKUs, 7 of which will be available this year and two more next year. The standard variants have 4 cores and 8 threads and there will also be two variants with 2 cores and 4 threads. The flagship model is the Core i7-1185G7, which has 4 cores and 8 threads with 5 MB L2 and 12 MB L3 cache. The CPU is supplied with TDPs from 12-28W (configurable) and has a base clock of 3.0GHz, a single-core boost of 4.8GHz and an all-core boost clock of 4.3GHz. The CPU will be supplied with the Iris Xe GPU with 96 EU or 768 cores, each of which will operate at a clock frequency of 1350 MHz.

By the way, all G7 variants have the same specifications and are available with 7/12/15/28W TDPs, whereby the main differences are in the clock rates. Certain G7 models will be equipped with 80 EU GPUs, while the G4 CPUs will only receive 48 EUs. The table provides an overview of this once again: 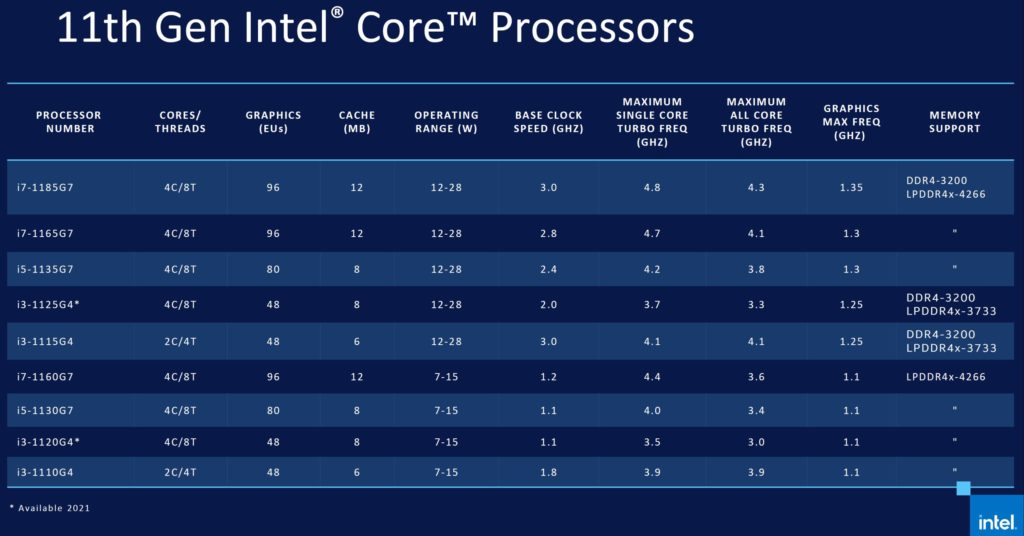 Intel has also provided a number of slides with their own performance measurements comparing the standard compute, graphics and also AI performance of their next generation Tiger Lake CPUs. Intel claims up to 35% faster performance on average for standard office applications, up to 4.4x faster build performance, up to 76% faster gaming performance, and also improved connectivity compared to AMD Ryzen 4000 Renoir APUs.

Compared to the Gen 11-based Ice Lake CPUs, the Gen 12-based Tiger Lake Xe CPUs offer up to 2X performance improvements. This is also made possible by certain optimizations that are made exclusively for Tiger Lake CPUs in the above title. Gears Tactics was recently announced as a title in partnership with Intel, with optimizations specifically for 11th Gen Tiger Lake CPUs. The Intel CPUs also use VRS, which results in more performance, something that is still missing on Ice Lake’s Gen 9.5 graphics chips. CS:GO is another outlier with a massive leap in performance with FPS numbers above the 100 mark compared to Ice Lake CPUs, which are not even capable of delivering consistent gameplay at 60 FPS.

Looking at the overall gaming performance scenario, the Tiger Lake Xe GPU delivers playable FPS at 1080p for most titles, which is impressive for an integrated GPU. Intel is also showing the GPU capabilities of its Xe GPU compared to AMD’s current Ryzen 7 4800U with Vega graphics at 1750 MHz and a discrete GeForce MX350 graphics chip with a TDP of about 25-30 W. The Intel Xe GPU consistently outperforms the AMD Ryzen 7 4800U and even surpasses the GeForce MX350 in several, if not all, games tested.

It is not only the game performance that is improved. Intel’s Xe GPU also provides faster encoding and decoding functions embedded as part of its media engine. Tiger Lake CPUs offer low-power 4K HDR10 and Doby Vision playback, dedicated AV1 hardware for decoding, 12-bit end-to-end video pipeline, and a mix of other technologies. Intel claims that the Xe graphics engine offers better game streaming capabilities than the Ryzen 4000 Renoir APUs, which of course would be worth testing.

In summary, it can be said that it should be exciting and AMD should certainly not rest on its pure core count. To write off Intel would certainly be a fatal mistake. Grade Xe shows where Raja Koduri could still lead Intel’s graphics division, not only in mobile graphics. But also there.

Teardown of an RTX 3080 Founders Edition for water cooling in less than 10 minutes! | Tutorial

Nvidia’s mysterious 12-pin connector for the RTX 3080 and RTX 3090, “Chinese whispers”, rumors, senseless panic and a matching cable from Seasonic | Background Story
The most important slides from NVIDIA’s keynote for the 2nd GeForce RTX Generation – Ampere in Hi-Res