We already know that cheaper products have to be produced more simply in order to be able to hit the targeted price point at all. If you take a graphics card from the lower middle class as an example, then it is definitely worthwhile to examine the consequences. Exemplary because it affects all manufacturers and products to the same extent. Unfortunately, physics and business studies cannot be deceived. Therefore, let’s take the cooler of such a card and have a look at the heatsink, which actually is not a heatsink anymore.

Ground heatpipes instead of a soldered copper bottom are not really what you would call optimum, but in a certain price range almost standard, unfortunately. And this is exactly where a backplate comes into play, with which you want to dissipate additional heat from the PCB. Many manufacturers therefore optimistically slap buckets of heat conducting pads on the backside of the plate and then put a cheap backplate on top of it. But where is this type of cooling most likely to pay off: GPU, memory, voltage converter or not at all?

To find this out, I have, as an example, specially prepared a backplate. Where you can see the holes now, there are the thermal connecting pads at exactly these places, which I cut out with the scalpel in the area of the holes. You know, I use the infrared camera, whose bolometer matrix has a high enough resolution to be able to detect such areas with certainty. For this purpose, I put a measuring point for control directly beside it on the surface of the backplate in order to be able to measure the temperature differences. 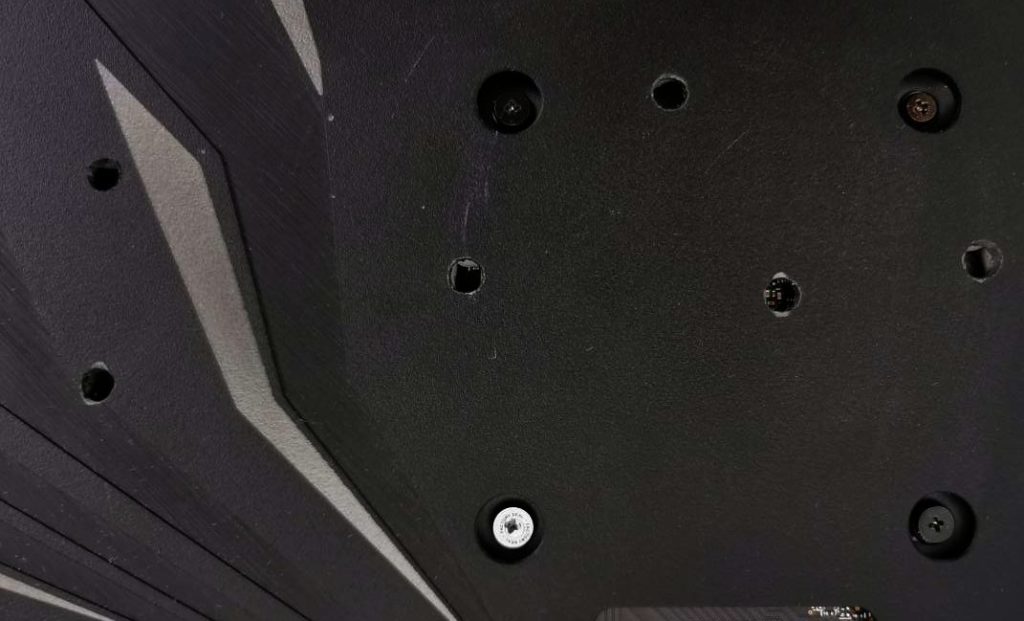 Surface temperatures on the back of the board

The first picture shows and now the starting position without mounted backplate. The measuring points, which are normally located on the board next to the holes, also show the board temperatures here, logically. But I need them so that I can better evaluate my measurements of the surface temperature of the plate afterwards (difference). Direct measurements with a calibrated probe resulted in an emissivity of 0.96 for the almost perfectly blackened backplate.

Let’s have a look at the temperatures after more than 30 minutes of full load (Witcher 3, UHD)! The area below the BGA with the GPU is around 66 °C, the hottest area below the voltage converters is around 61 °C and the hottest spot under a memory module at approx. 62 °C. You can definitely live with that and many manufacturers would simply do without the backplate here if it weren’t for the ugly look. Competition stimulates the business and so you can now find very cheaply punched and simply mounted backplates up to the areas of cheap cards. 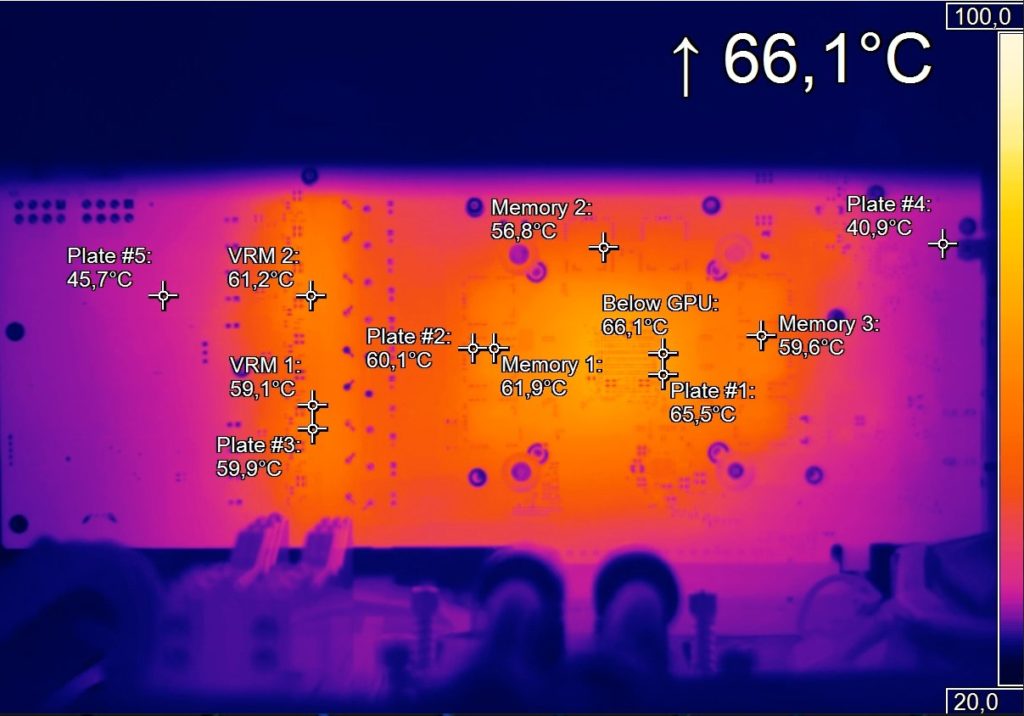 Let us now lay a long, vertical and approximately 1.5 cm wide strip and repeat The little game with the three areas for the memory modules and of course as a large square pad also below the BGA. Then we mount the backplate and let the Witcher run for another 30 minutes. The biggest difference here is in the GPU! we measure around 5 degrees/Kelvin less, which shows beautifully how suboptimal these direct heat touch (DHT) solutions are in reality instead of real heatsinks.

At the temperatures below the storage tank there are still approx. 2 degrees difference, with the voltage transformers only one. Oops? Now of course you have to know that the board temperatures do not always show the component temperatures. The backside measurement is still the most accurate for voltage converters, but not for the hottest RAM modules, because here the current-carrying supply tracks also run along the board. The second finding now concerns the temperature difference between the board and the top side of the backplate.

The first finding: all pads with a thermal conductivity of more than 4 W/mK perform about the same and it does not matter at all whether they come from the grab table or from the pharmacy. So here you don’t even have to take on the financial side of things, so even a dozen or so items are easily enough. The more expensive pads let the shown temperaures about 5 minutes earlier, but after that everything remains the same after reaching saturation. 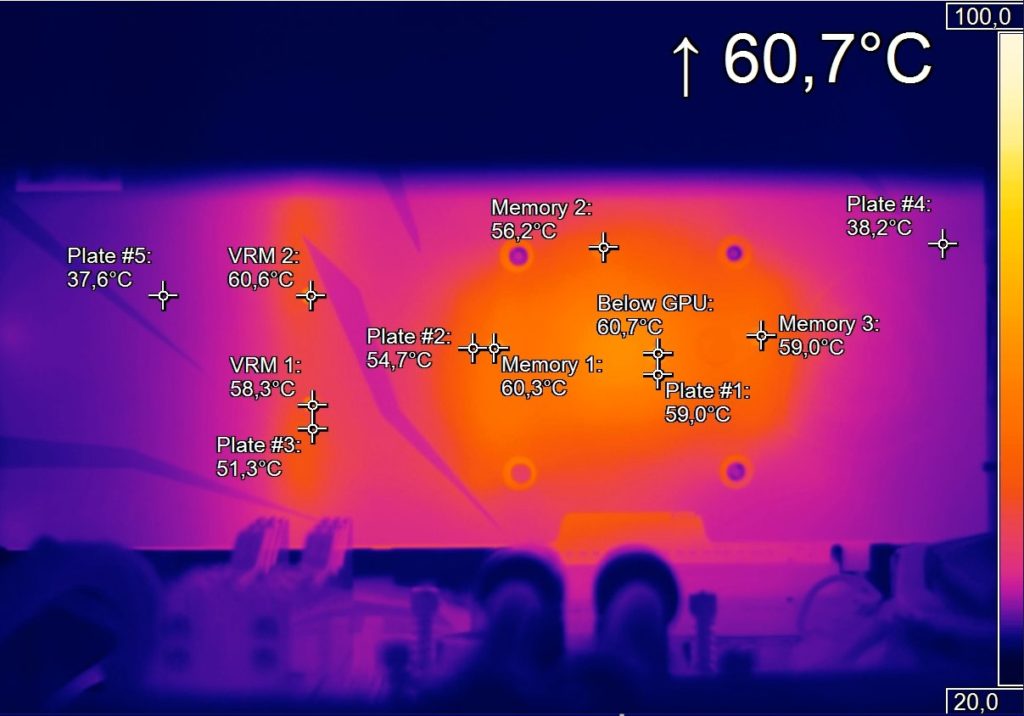 Temperatures of the components and fan speeds

Let’s start with the GPU. At 71 to 72 °C without backplate and 63 to 64 °C with backplate, the greatest leap is also achieved here. Up to 8 degrees difference is really a real house number. At the hotspot, the difference between the read 81 or 84 degrees much smaller. However, since AMD couples the fan control to the hotspot, the GPU with backplate gets significantly cooler, but unfortunately it doesn’t get quieter. The 3 degree hotspot difference is only sufficient for a reduction of the fan speed by about 50 to 70 rpm. No fun. 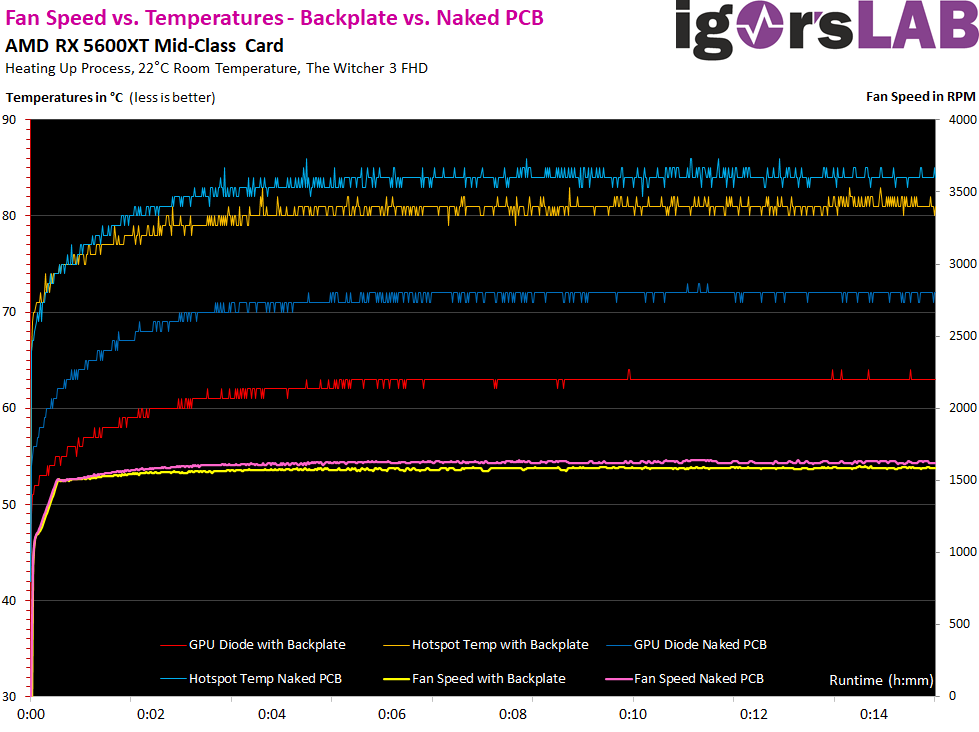 It is even more blatant with the memory, because there are no differences at all. Especially with the cheaper cards you could save the pads completely. If so, then at most below the modules that lie between the GPU and the voltage converters. The backplate will therefore not be able to significantly support the memory. 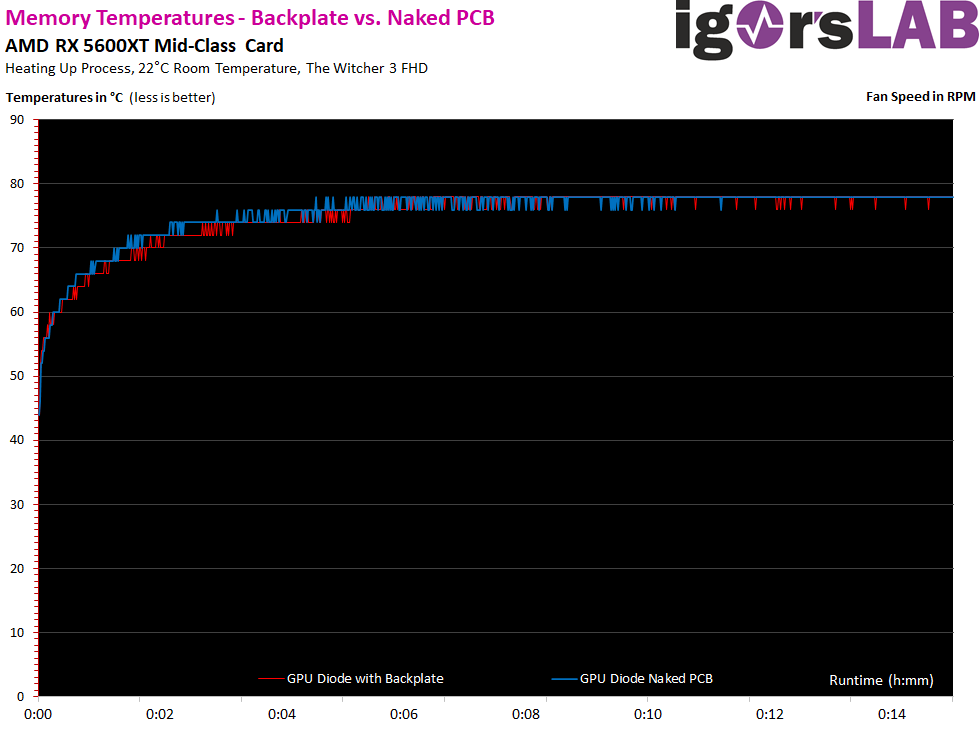 The more cost-effective such a cooler is, the more important support by the backplate can become, as long as you are in the range of normal entry-level or mid-range graphics cards. Anything that shoots well over 200 watts of waste heat into orbit is subject to completely different laws, because you have to save on the cooler in a different way. Here I refer explicitly to the nonsense with the ground heatpipes, which are pressed unlovingly into the aluminium and you don’t have to wonder why this doesn’t work optimally.

Therefore, as long as a backplate is available that can also absorb and emit the waste heat, a noticeable improvement can be achieved with suitable pads underneath the GPU and the most thermally sensitive memory modules. This is a benefit that costs almost nothing, but at least makes the GPU live quieter and cooler. This does not have to be a very strong pharmacy solution, but can be ordered from a nice discounter. Because she does the same thing. The limiting factor here is the backplate and the transition to the air in the case anyway.

Fan assembly in a case with overpressure concept – How many fans do you actually need where? | Short test
NVIDIA Ampere with hot memory and even the board partners are still in the dark