Today you get a little insight behind the scenes of an exemplary graphics card production at PC Partner. I have simply summarized the sequences and also joined in on the schematic appropriate. A must for any tech freak!

In Dongguan (PRC) some graphics card manufacturers have their factories, even if the headquarters are often enough in either Taipei (Taiwan) or Hong Kong. Producing where you can expand and save on labour costs is a fact that must be accepted. Just like that, you don't get to China, at least not to the People's Republic.

So, if you like, you go to Dongguan yourself, because if you really want to stay authentic, you have to avoid the travel stress including all the circumstances such as border controls, high temperatures and humidity, as well as smog and time change already once on, take on it. And if you then breathlessly gasp for fresh air, you will also quickly understand the actual meaning of the term "upper ten thousand".

I have now compared, simplified and pressed into a kind of scheme that is roughly the same in all plants. Of course, the machinery varies slightly from manufacturer to manufacturer, but the basic principle is still the same. And so we see the preparation (black and blue), the production steps (orange), the quality controls (green), as well as the repair and post-processing (red). Since I did the vote together with the board partners, the label is in English, but this should certainly not be a real hurdle. 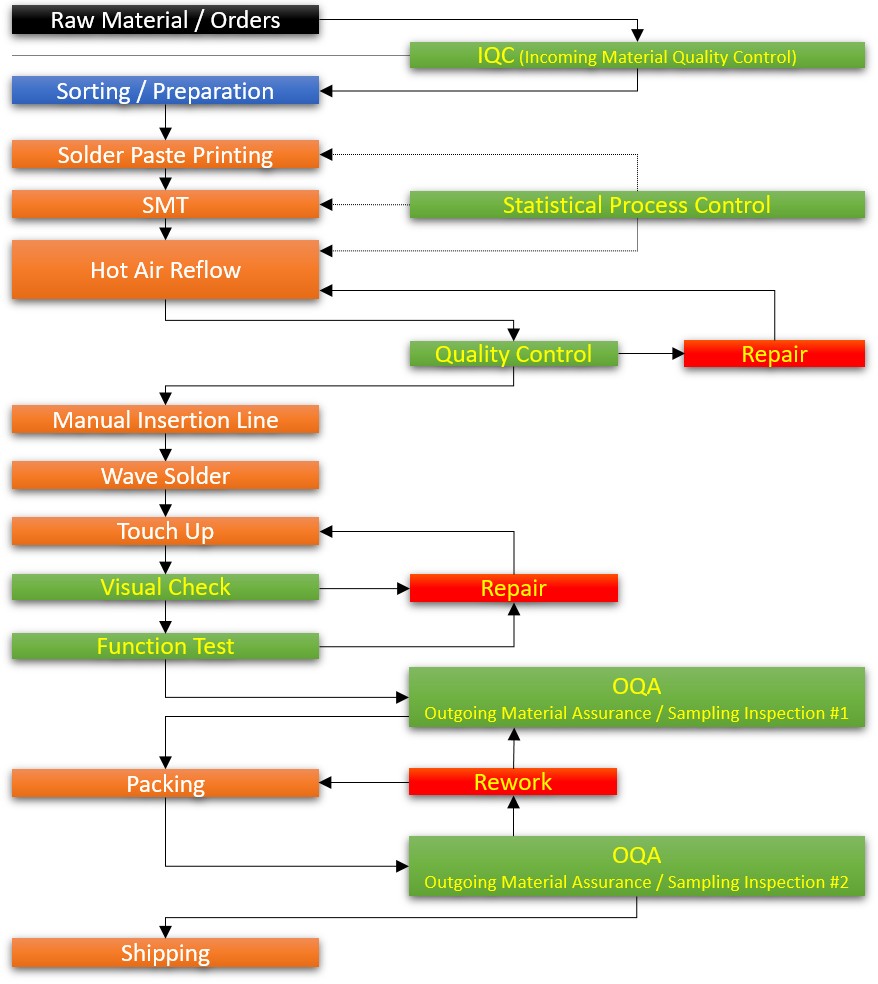 Each manufacturer has different stations at certain points, e.g. storage, buffers between SMT and manual assembly, rework, testing and packaging. But I will also go into this in more detail, manufacturer-neutral. The pictures are exclusively own material of mine and were also released by the manufacturers (mainly PC Partners) for publication. This is a rather rare opportunity, because in other factories you have to hand over not only the cameras, but also all smartphones and even smartwatches. Security at all levels is always a matter of course and also physically present.