The facts are becoming more and more condensed and we too can contribute our own 50 cents to the general level of information. All in all, a fairly clear picture of the new GeForce GTX is already emerging. When the GeForce GTX 1060 comes to an end, a more potent successor is probably ready. Read more...

In the meantime, various sources, such as videocardz.com, wccftech.com and others leaked more and more details about the geforce GTX 1660 (Ti) (we have already reported here and here) and more or less indirectly confirmed by third parties. In addition, various rumours are also circulating among the board partners, the ODMs and OEMs, in forums and in the circle of colleagues – naturally as always before the appearance of new hardware. I have summarized all this once for the readers and also with my own insights and/ conclusions.

But – and this is important – none of the possible information has been officially confirmed by Nvidia so far and therefore still have the famous speculative status. So it's not a leak of internal slides, but it's safe to assume that there's always something true about everything that several different sources report.

That is precisely why I have listed the things that I consider to be relevant and reasonably safe in the table below. Although the 3GB variant has been mentioned time and again, it is said to have only appeared via various product registrations of individual manufacturers and is therefore rather speculative.

It is interesting in this table that the possible GeForce GTX 1660 Ti should share the same 6-layer PCB as Nvidia also provides for the cheaper GeForce RTX 2060. From this one could conclude that the new chip (TU-116-400) to the TU106 IS PIN compatible and the package is the same size. The very brave would now conclude that the TU116 could actually be "only" an even more circumcised TU106, to which the RT and Tensor cores have also been "lost" by hardware strap.

If this were the case, one could also easily conclude on a possible performance of such a GeForce GTX 1660 Ti. With around 80% of the Turing cores, but a little more clock, a current GeForce GTX 1070 would be in some sight, especially since the GTX 1660 Ti (albeit slower) GDDR6 is supposed to be installed. This is matched by pre-leaked results of a benchmark from Ashes of the Singularity, which also compares the GTX 1060 (both in a laptop), which is likely to be MMX modules. 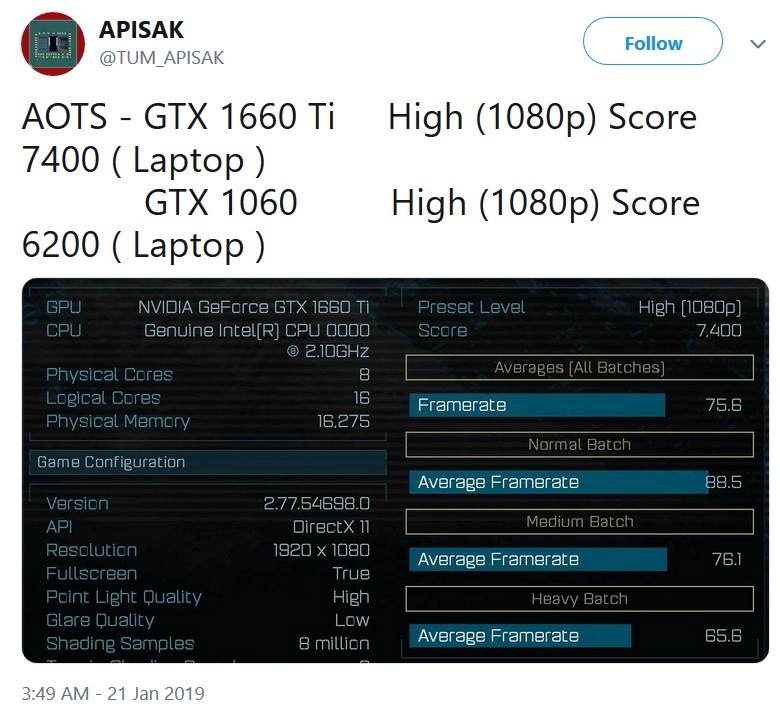 However, as always, this benchmark is only a clue, because firstly, one does not know the exact settings of both systems and the benchmark and secondly, the currently available "Green Light Driver" for the evaluation of the board partners is not final, but only a patched legacy solution with new hardware ID.

If you believe your colleagues from the press and industry, the launch date of the GeForce GTX 1660 Ti will be sometime in mid-February 2019. It is interesting in this context that even from ODM circles no exact date can be given this time. But you speculate with an appointment nearby the Valentine's Day or one or two weeks after. That would be logical, because immediately after the Chinese New Year (05.02.2019) AMD launches the Radeon Vega VII.

Before that, a launch would probably be too short in time and the reviewers would certainly need at least another week to be able to write reviews. With influencers, this would certainly be possible in a few minutes, but no one will want to launch quite so insubstantially. Because one thing is also a fact: in the targeted performance class, this card is certainly more important for Nvidia than it might look at first glance. The butter-and-bread cards, which are so often ridiculed and ridiculed, generate decent sales.

Priced, this speculator for a possible GeForce GTX 1660 Ti hangs approx. 279 USD high, if you can believe the sparrows on the roofs. But what really ends up in the store shelf and at the customer's shopping cart remains to be seen as always. However, if this card (including the smaller offshoots) comes as expected and ultimately the performance is right, then Nvidia has a hot iron in the fire under warranty.