The new MSI RTX 2060 Gaming Z is a well-designed manufacturer's design, actually playing in a different league than Nvidia's rather simple Founders Edition. Both the performance and the optics are right. Only for the price can MSI be less, even if this card is more elaborate than it should have been. We are testing the state of mass production with new BIOS...

The new MSI RTX 2060 Gaming Z is already properly brushed on riot from the factory. Certainly also visually, but above all at the beat. And so MSI sends The smallest GeForce RTX card from Nvidia to the customer with a good beat, a sufficiently large power limit of course included. Because it almost scratches out of the box at the 2 GHz mark, even after full warming. What else (off) goes on and how loud and warm the final cards will then become, will clarify exactly this test. 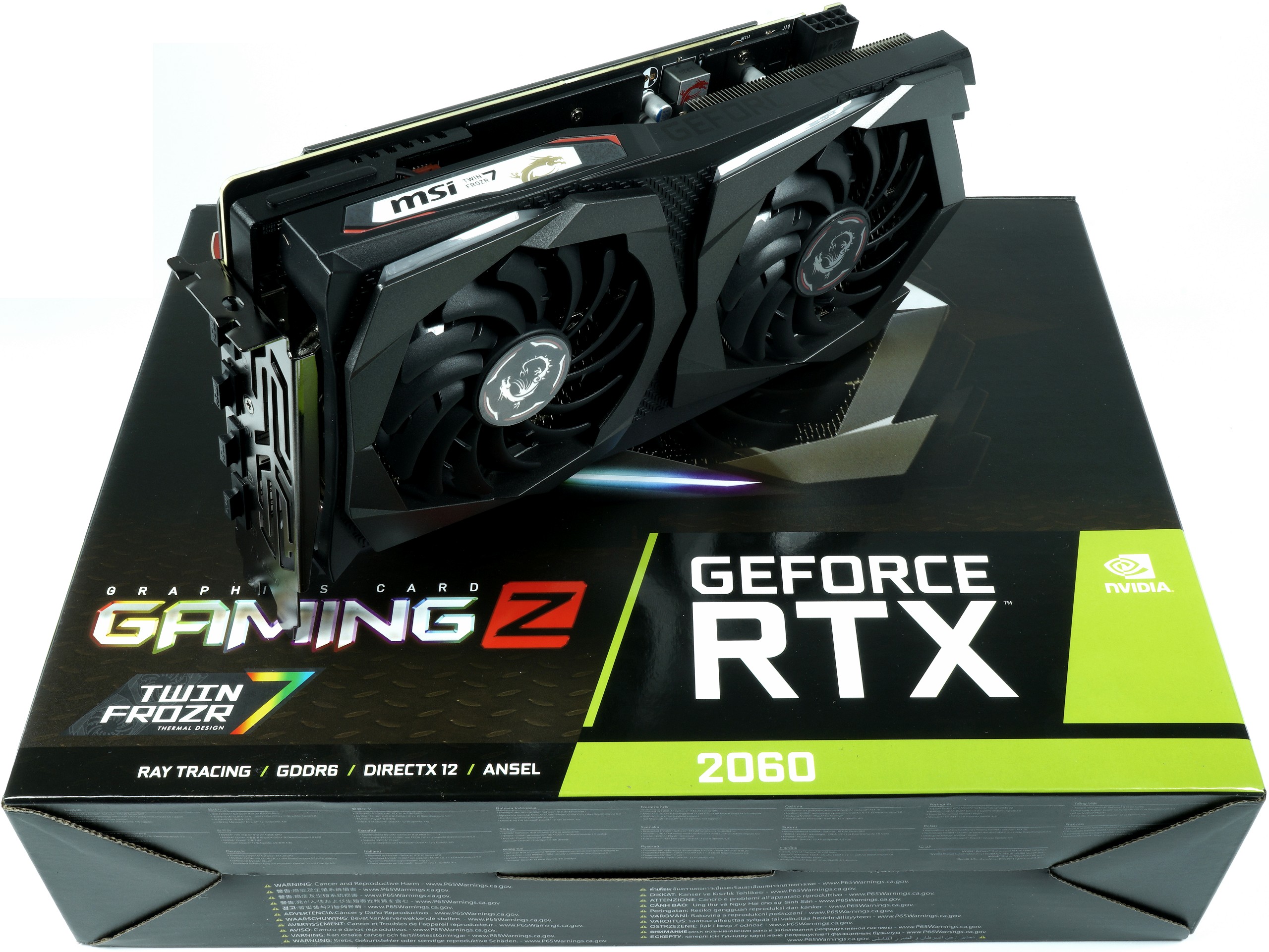 With this card I really didn't make it easy, but as a retail card from the right mass production, the product that will soon be on the shelf is different from what was previously delivered to individual reviewers. Their maps from the MVT (Manufacturing Verification Testing) phase do not quite represent the final status, so my review and the results may differ significantly from other tests in some respects. I have to put that first.

The 954 gram card is 24.8 cm long, measures 12.5 cm from top edge slot panel to top edge graphic card case and is 4.1 cm thick. In addition, there is another 0.5 cm for the backplate in brush look. The cover is made of plastic in the base and of course there is still a lot of (background) illuminated area on the front and bottom, which can be regulated by driver and can also be switched off. This includes the MSI-TwinFrozr-7 logo on the top. 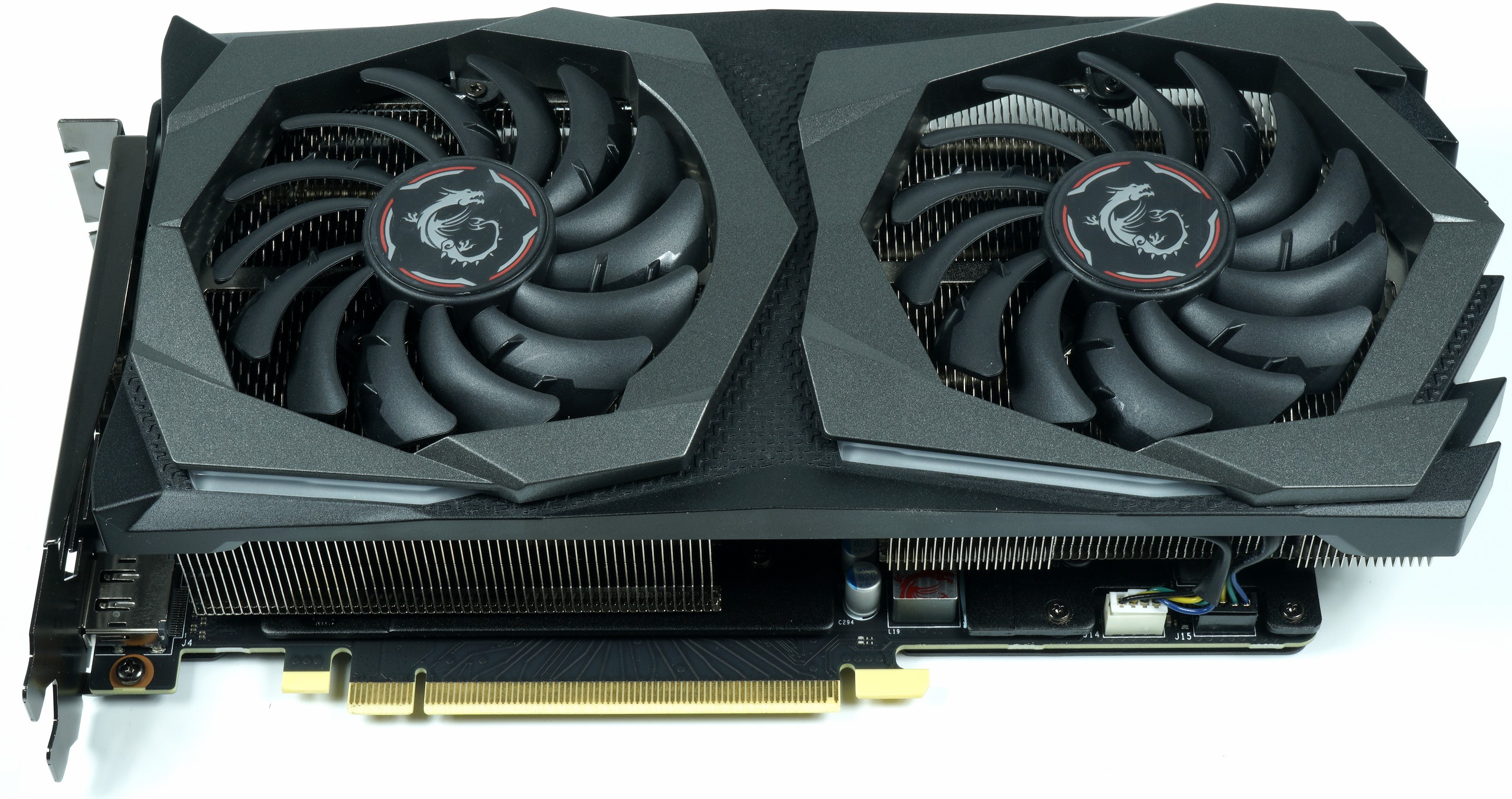 The length results despite the actually only 21cm short PCB from the fan assembly with two 8.5 cm fans and 14 rotor blades, the cooling fins of the approximately one kilo heavy Boliden are arranged vertically and in two blocks. Four 6 mm heatpipes as nickel-plated copper composite material then distribute the waste heat to the said cooling fins, the upper edge of which deviates from the normal standard as a group structure.

The connection options are analogous to the reference of the normal average. You get three DisplayPort1.4 and one HDMI2.0 jack, but you do not have the USB-C jack on the slot panel. MsI delivers this card in contrast to the larger GeForce RTX 2070 Ti Gaming Z with only an 8-pin ATX power supply, but it should struggle well. But more on that. MSI gives the card a maximum power limit of 200 watts, ex works a Power Target of 190 watts is preset.

The screenshot of GPU-Z gives us a first impression: 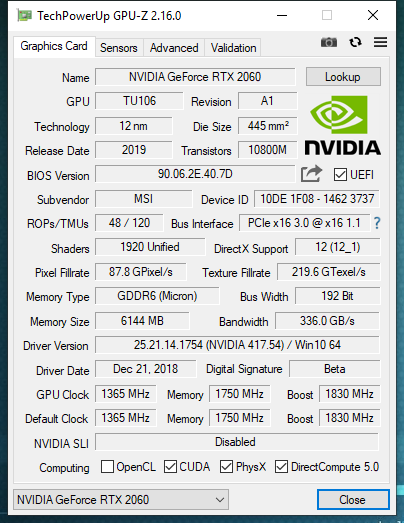 At the end of this introduction, the maps of the new generation and those of the old generation in direct tabular comparison:

From Nvidia in Love: GeForce GTX 1660 Ti 6GB and GTX 1660 6GB / 3GB as a gift already for Valentine's Day?
When the editor becomes a developer – a hotspot doesn't have to be a cooling problem | igorsLAB