Sure, in the price range between 400 and 500 euros there are many offers of open or semi-open systems. so why the Avantone Pro Planar Red and above all, why at this price? Of course, you can sink money into audio products (like cars or pets) with relish, and you’ll never get to the monetary end of unlimited possibilities unless your name is Croesus. And even if it may sound pretentious at first, for 500 Euros you get at most audiophile upper class, the real reference is still clearly above that. Really? Let’s see what we can do 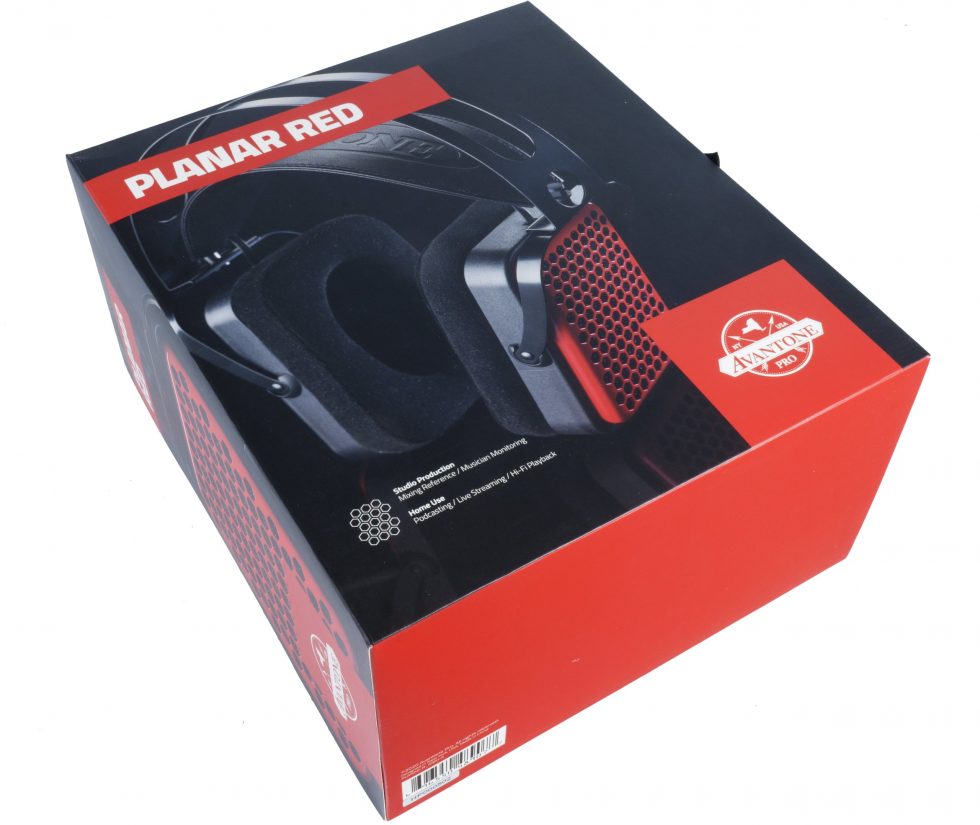 One thing I want to say first, because I have to justify my judgement later: it is a purely private purchase, whose acoustic consequences I would like to share publicly, because it is worthwhile from my point of view. Of course, the 456 euros I paid for it online at the dealer is a lot of money, but of course you should always consider it in relation to the value. And that’s where it gets interesting, because the design doesn’t fit into the normal scheme at all. Neither is the exterior, by the way, but taste is secondary here for now.

What is a magnetostatic headphone?

The Avantone Pro Planar Red are headphones based on the magnetostatic principle, where a thin foil with an electrical conductor (“open coil”) is made to oscillate in a magnetic constant field provided by powerful push-pull permanent magnets (neodymium). If the electrical signal is now sent through the conductive paths running on the membrane surface, the foil moves back and forth between the magnets.

This special film is also much lighter than the speaker diaphragms of normal headphones and can thus theoretically also represent much finer nuances more vividly. The disadvantage is the weight of the necessary magnets – so the advantages of the huge transducer surface are not completely free. Nevertheless, not even 500 Euros for a magnetostat, as silly as it may sound to some, is a rather cheap affair. If you know what good it might do you. But first test, then we are wiser.

In the somewhat bulky box you get the headphones weighing 480 grams, two connection cables, a canvas carrying bag and a kind of manual, which is actually none. German? Wrong! And the contents of the manual are also a bit sparse. Technical data and some self-congratulation, that was it, unfortunately. How and for what you can use the two enclosed cables, for example, the responsible buyer can then find out for himself by try & error. Occupational therapy. You don’t learn that the two jacks on the headphones are both full stereo jacks and that you can actually get there easily with the one 3.5 mm jack cable. It doesn’t matter whether you plug it in on the right or the left. The Y-cable, which is also included, is only for connecting two such headphones at the same time for a human couple in love. This is quite useless, because the end pieces are not very long and the impedance of such a receiver is already quite low at 32 ohms. What’s really missing, however, and should really be a matter of course in this price range, is an adapter to the 6.3 mm jack found on better headphone amplifiers. In the picture I simply added them from my own stock.

Now let’s get to the externals, because they are really striking at first. The angular shape is somewhat due to the magnetostats, and the open principle with the grid of holes on the back of the shells. The color, ok, well. There are also this Headphones in black and purely optically everything gets a nice 1970s retro look. You can like that or not, the parts are stable in any case. Well, certain earmuffs in the industrial sector look quite similar, but so what? You take what you get and then you arrange. That was also possible with Abba back then, and once you have the thing on, you usually don’t see it. 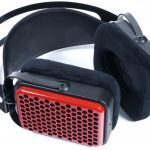 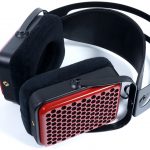 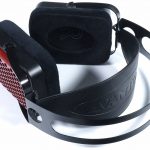 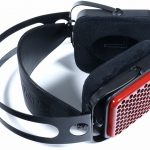 What else? The fit is really perfect for larger heads, despite the headphones’ own high weight of almost half a kilogram. Mass full and caution with the headbanging, so that the heavy lump does not shoot off into the orbit. Sits well, but please only in a sitting position. The screw in the picture below should be tightened every now and then, even if the joint actually does well what it should. It is a simple but well working 2-axis solution with rotation and tilting movement.

The rest of the adjustment is taken care of by the headband made of imitation leather together with the elastic temple made of spring steel. It adjusts quickly, intuitively and really perfectly, so you could sit like that for hours without anything pressing. Actually, everyone whose head is still big enough can live with this, and once again you notice that no average Chinese measurements served as a template here, but the good old US-American large-capacity skull in 6XL This makes these headphones at least suitable for the EU, smaller women and children excluded. It won’t work because it can’t find its footing. Real hat sizes with a proud 64 in their passport, on the other hand, will be crassly pleased. Me, for example.

Let’s briefly return to the sockets for the connection cable. They are both parallel wired connectors and you can plug in whatever and wherever you want, it will always be right. Even the Y-cable could be plugged in on both sides, although it’s actually a bit pointless. Well, double is better and it looks groovier. Don’t. The cables are both textile covered and somewhat rigid. In addition, you should avoid touching them, otherwise you will have the perfect structure-borne sound in your middle ear faster than the person sitting next to you on the public transport can say pug. He will have to put up with what the Planar Red, as an open headphone, reports to the environment. And that’s a lot. Up to 5 watts are listed in the data sheet, even though 250 mW should be enough according to the manufacturer. I once tortured myself on a trial basis, and the Beyerdynamic A20 grandiosely delivered me to the epicenter of the pain wave. You can do it, but you shouldn’t. Exactly for this purpose there is an explicit table in the manual, where there is nothing else, what is beneficial or detrimental to health to what extent and for how long. Level-fixed? But so much… 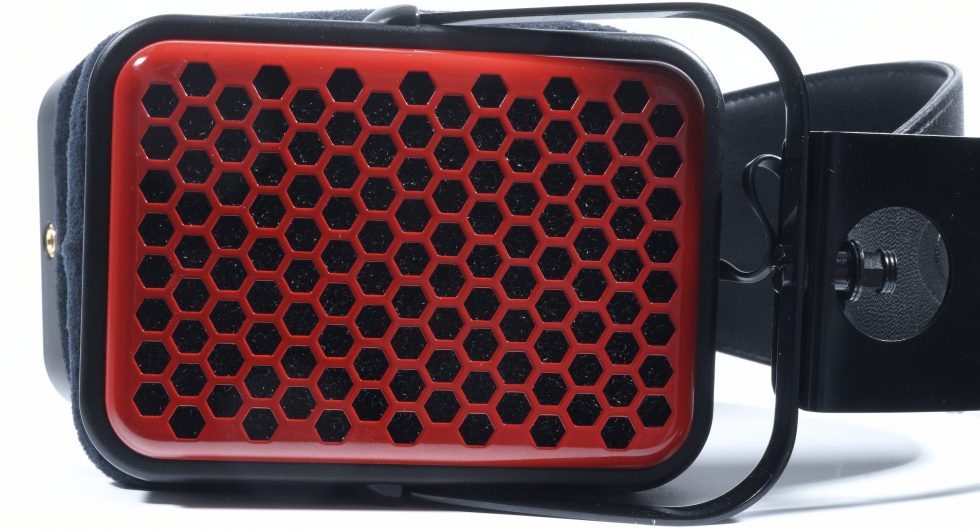 The parts are anchored by Velcro and can be easily removed or reattached. Below you can also see the openings above the magnetostats and on the right a few compensation openings for the mechanical sounding. But I’ll come to the sound later, because for now it’s all about the exterior and the interior. 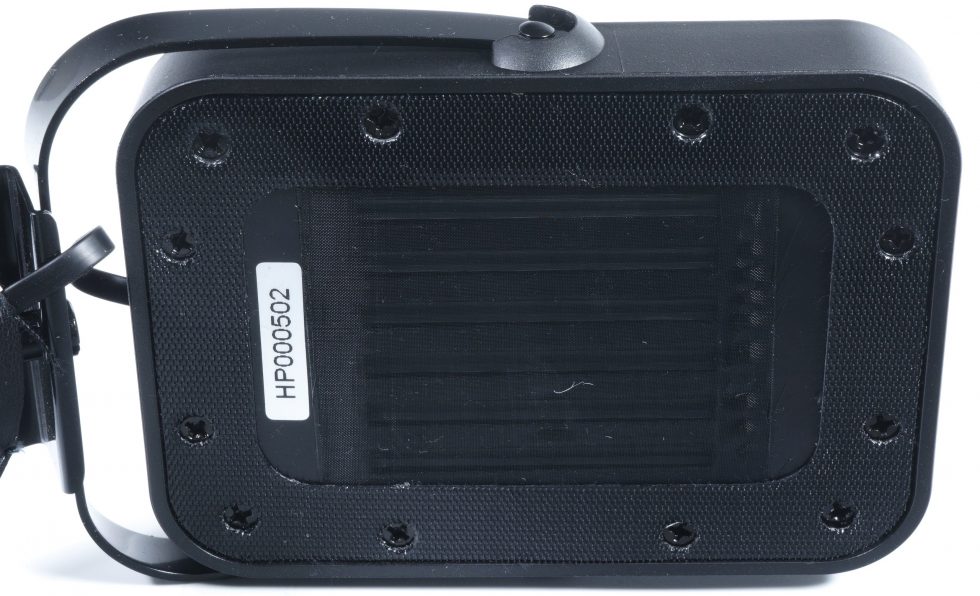 The build quality is ok, but not top notch. Everything fits tightly, makes a valuable and durable impression and at least leaves no question marks. Of course, something like this is not premium, it lacks the more noble materials and a certain polish, but it is also not a manufacturing low blow. In the end we have a typical US product, which is at least as honest as a solid Weber grill, which doesn’t have small gap dimensions, but is actually made of one piece and indestructible and also does its job better than average. So the audio sample can only be good. Or is it? Let’s be surprised for once!