The new ATX 3.0 standard brings many innovations, especially since some things can’t be completely separated from the PCIe 5.0 standard. But even though they are different consortia, there is a lot of overlap that then finds its way into the other specification as well. After all, it’s basically about the same thing and of course you talk to each other. That’s exactly what I want to summarize today and my thanks go to my friend Aris from hwbusters.com, who took the trouble to bring it all together. I have already published several articles on the two standards, which are well worth reading. And it came exactly as I had predicted (and leaked) back then, with some nuances even harsher in the meantime. That’s a huge pile of information, of course, but a technically savvy and ambitious reader won’t let something like that stop them. Therefore, in advance again the second article on the subject, after I had already presented the specifications of the 12VHPWR connector exclusively in October 2021:

Leaving all the technical overhead out of the equation, there are still some important changes that the ATX v3.0 specification brings. Here Aris has picked out the most important things:

Of all the changes mentioned above, the most important are Intel’s new transient response tests, which go up to 200% of the power supply’s maximum rating. However, this test only takes 100 μs, so it will not cause any problems with most power supplies. On the other hand, the hardest transient tests are the 180% load for 1 ms and the 160% load for 10 ms. Aris expects most power supplies to fail both of these tests (and so far, unfortunately, they have). It is simply crazy to demand that a power supply has adequate protection features and at the same time deliver such high power values for periods of 1 ms and more.

Aris had discussed the new transient tests with Intel before the ATX specification was released, and recommended to them that it would be better to push GPU manufacturers to optimize their products’ DC-DC circuits and eliminate any nasty current spikes, rather than blanketly pushing power supply manufacturers to make significant changes. Since Intel apparently could not force the GPU manufacturers Nvidia and AMD to do so (I reported about this in detail), they finally chose the hard way. What was suggested by NVIDIA and also AMD, I had already published exclusively:

NVIDIA’s and AMD’s demands on the PCI SIG for the new 600 Watt VGA cards – limits, allowed overruns and transients | Exclusive

We can’t know how bad the power spikes will be in the upcoming GPU generations, but according to my own measurements on the GeForce RTX 3090 Ti SUPRIM, this graphics card, which seems to be the bridge between the 3000 and 4000 series, didn’t show any increased power spikes (on the contrary, they were even lower), which could also indicate that Nvidia has adjusted the power supply.The following picture shows a very significant cut, which did not exist before. 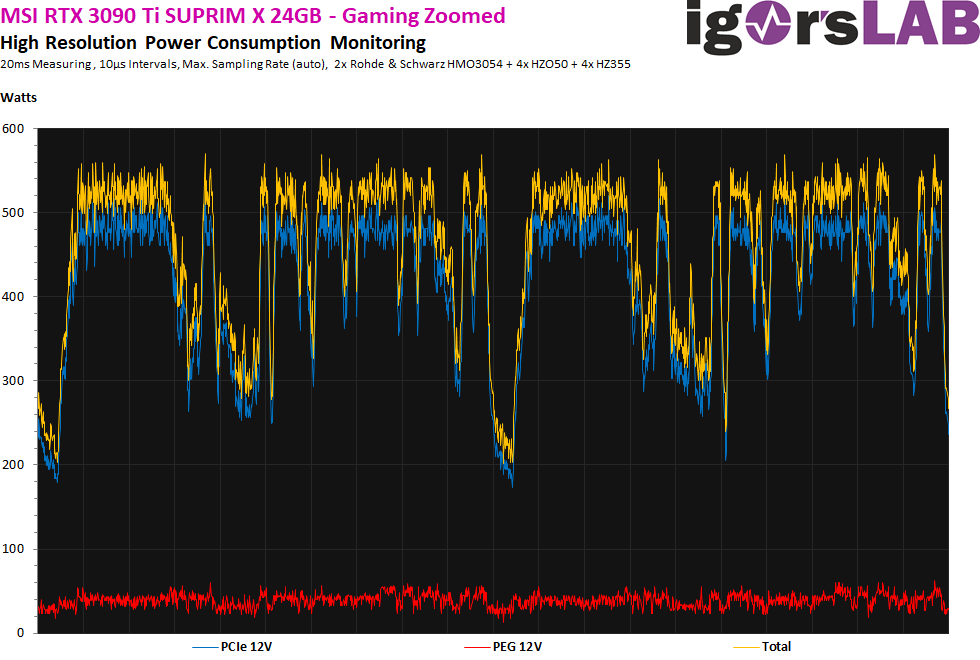 By the way, the 12VHPWR connector is a child of the PCIe 5.0 specification for the power supply of PCIe expansion cards and not an ATX 3.0 invention, but it ultimately affects power supplies and their specification because of the sideband signals to be used. However, it is not THE intentional PCIe 5.0 connector, but one of several described in this specification. But it is, together with the 48-volt connection, at least the latest.

At the end I would like to recommend Aris’ new website to you, which certainly contains information that you would otherwise only find out second or third hand on the Internet. If you’re really interested in the details surrounding power supplies, this is definitely a new and good resource for you to visit.