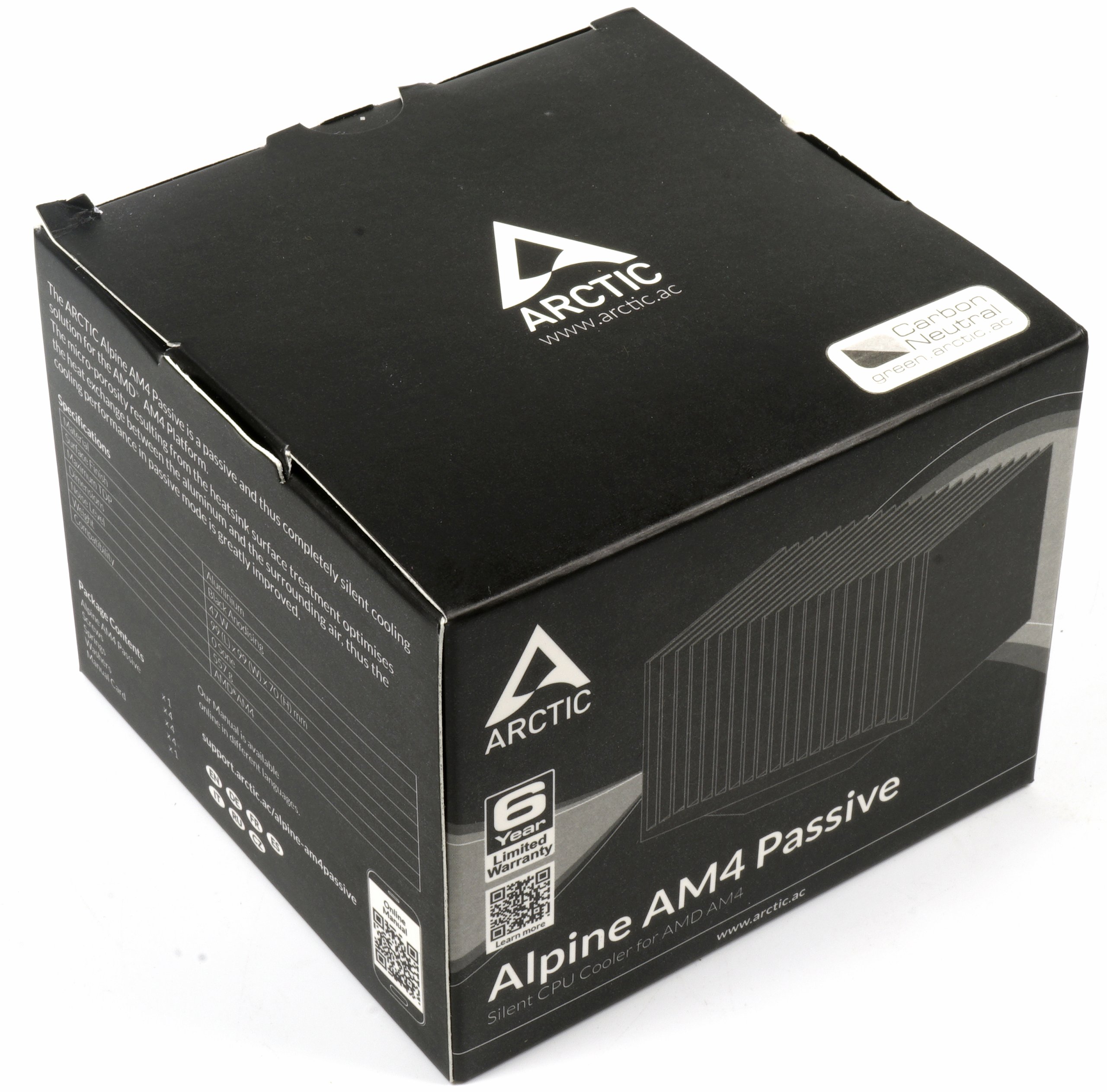 The Price of the Arctic AM4 Passive is priced as a blackened piece of stranded aluminium with its approx. 12 Euro street price a very tempting option to be able to cool smaller PCs pretty much silently. But until now, evil physics has always been the spoiler of larger projects, because it is not so easy to get out of the way.

Arctic wants to be able to disperse 47 watts with it without any problems at best, but sees in real terms rather 35 watts as a target, e.g. APUs such as the Ryzen 5 2400 GE. But that's where I've become audible, because I've been looking for something suitable for a long time. So I also invested the time to test the good piece.

Let's unpack it and on! the total size of 9.9 x 9.9 cm, black anodized aluminium block weighs 559 grams according to laboratory scale. The customer also receives four screws including springs and self-adhesive washers. The sticker and QR code for the manual is nice, but unfortunately leads to the wrong side, where you have to hang out for the product again in the overview. This sticker could also have been omitted. 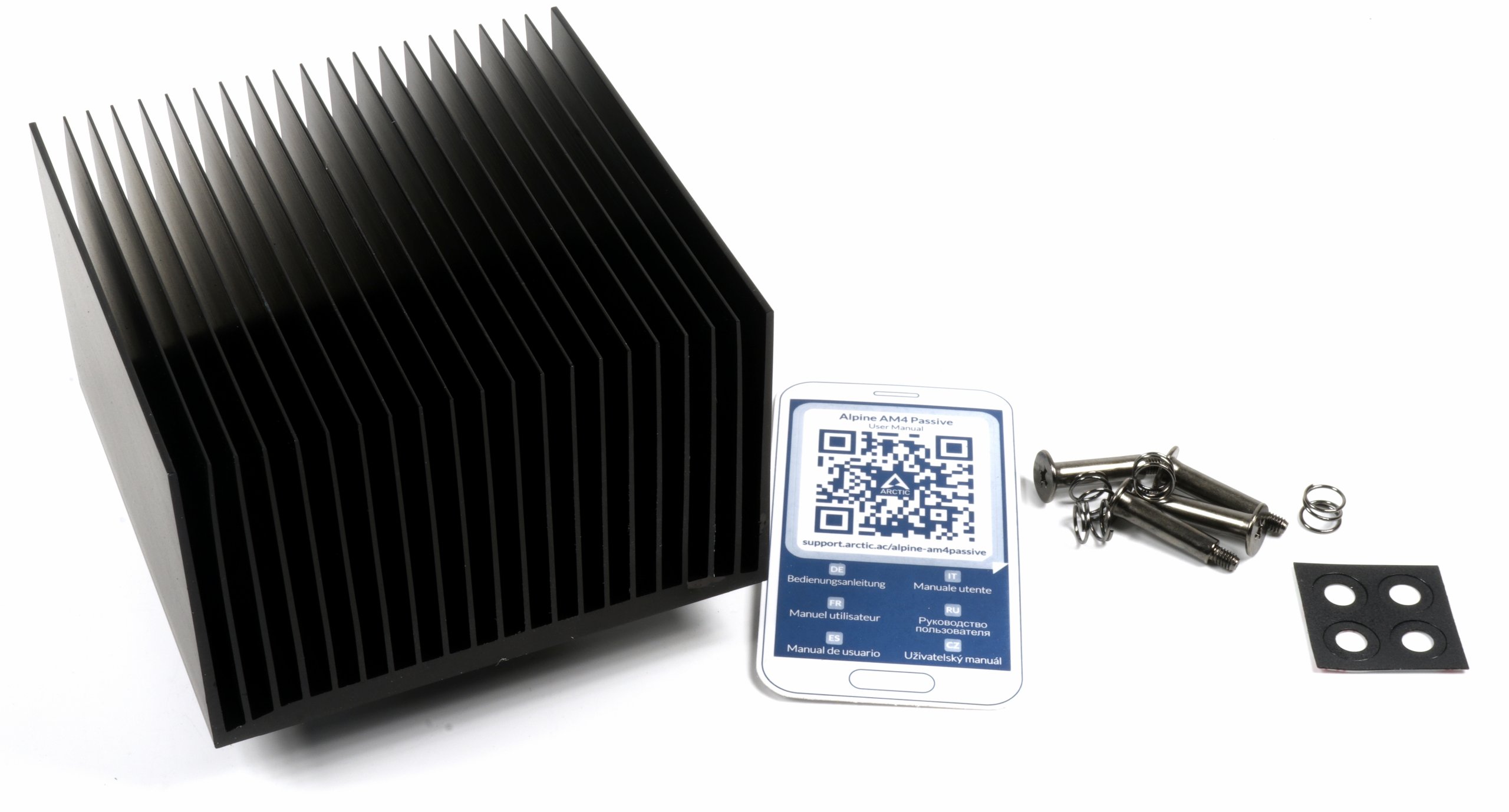 The cooler itself is also supplied with applied thermal paste and you really would have to do nothing but set up and screw the good piece. So quite among us, with better paste you would certainly save another 1-2 Kelvin, which doesn't really make the cabbage fat either. So that fits the way it comes out of the box. Even if it's not quite optimal. 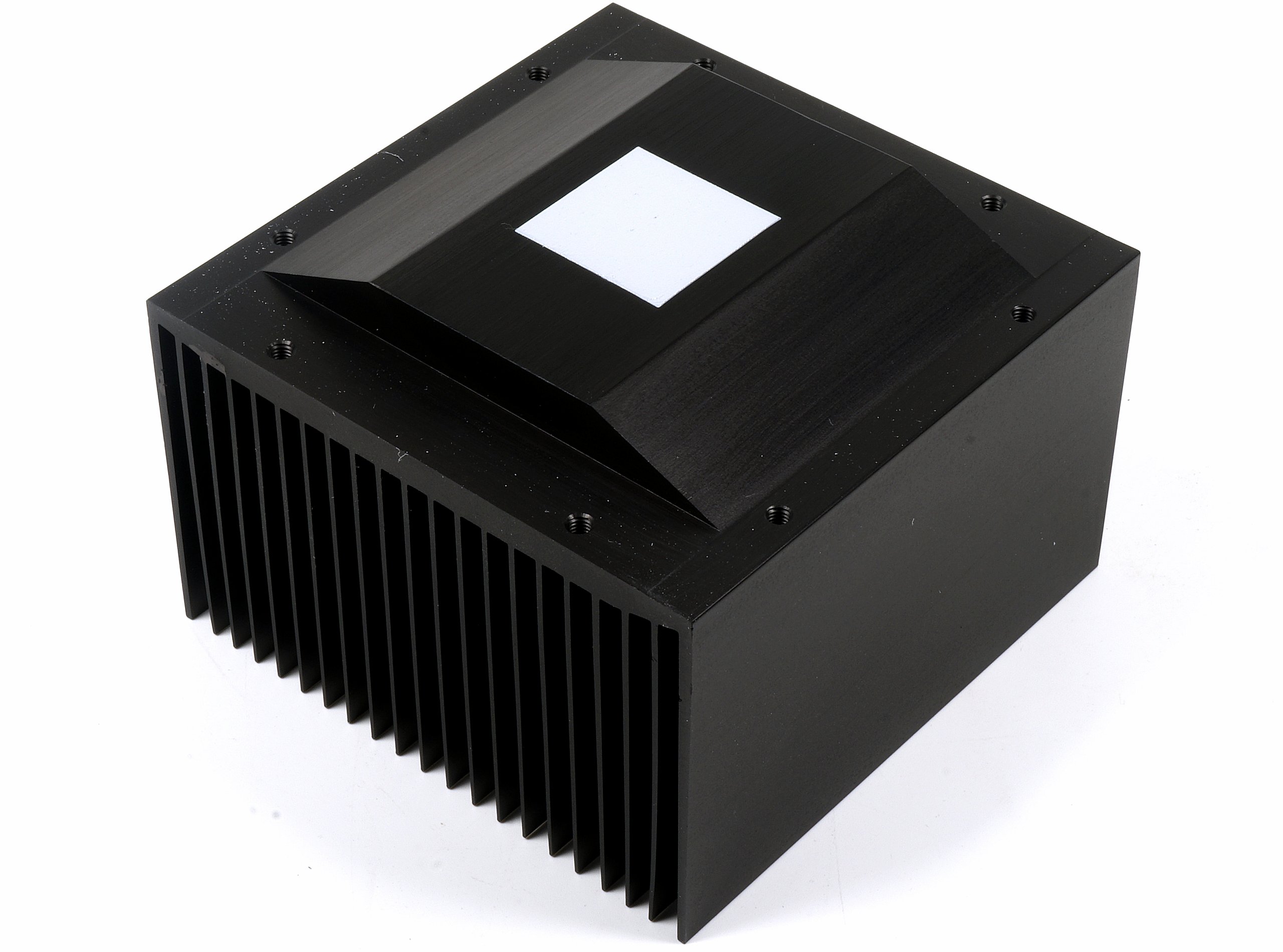 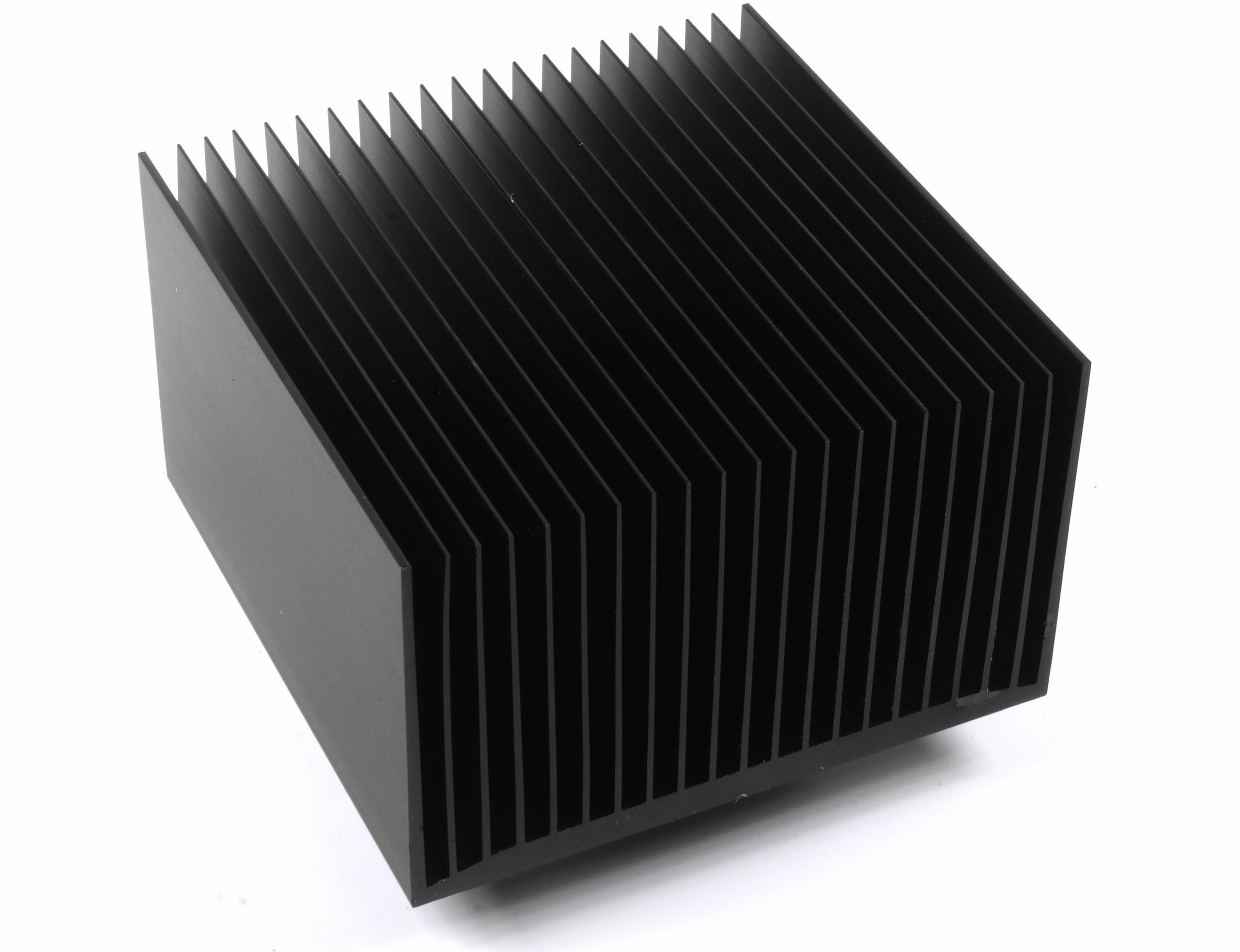 The eight threaded holes on the ground allow a flexible, also rotated 90° mounting, especially since the surface is also square. There is no more to write about this aluminium cut.

You should be a little careful. If the board is located in the housing (i.e. horizontally), the installation direction hardly really matters in theory. Mounted (i.e. vertically), the self-convection factor is not entirely unimportant. The image below also shows that in the case of the rotated cooler, the memory would almost half obscure one side of the slat openings. Then better as shown in the picture. 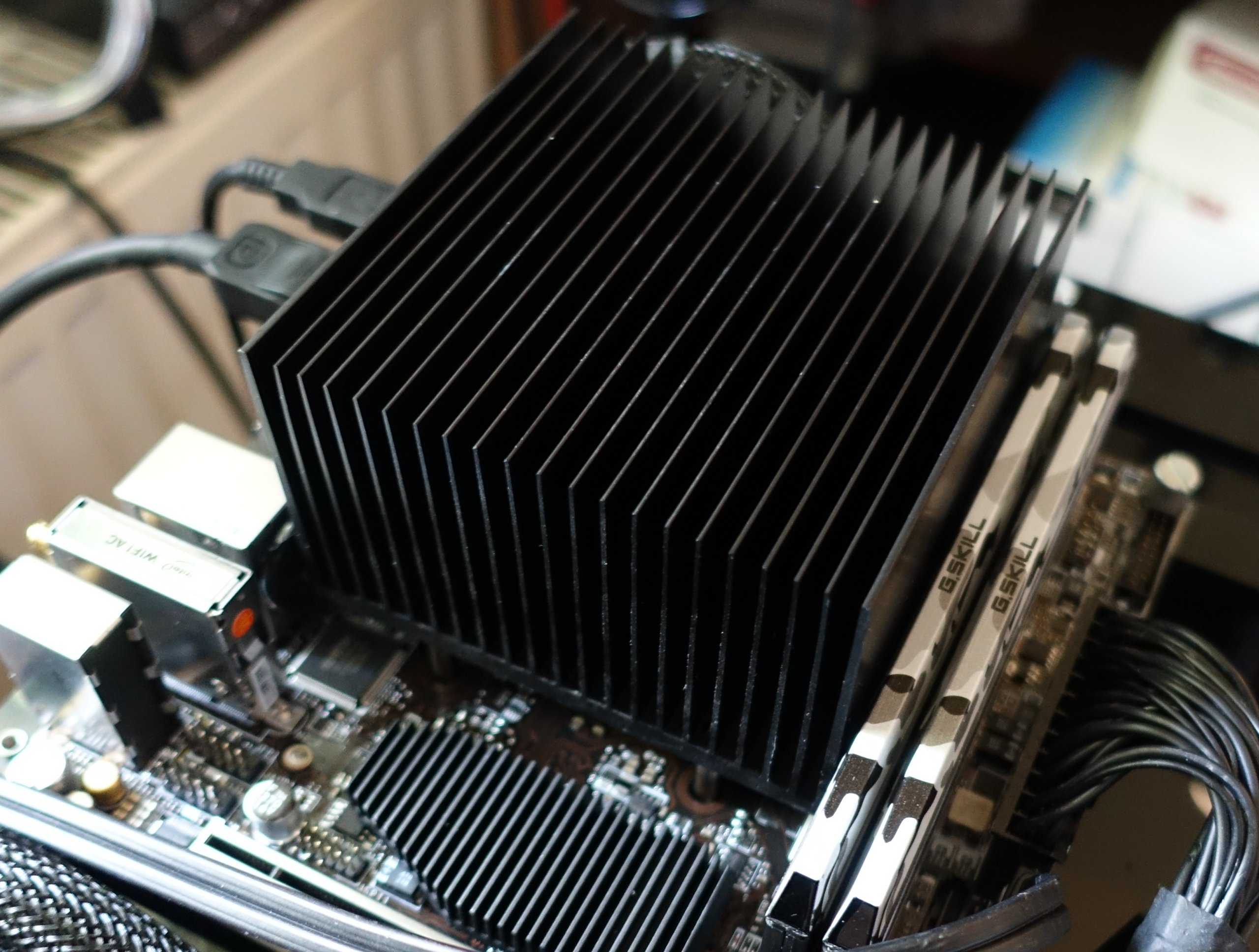 For installation, it is necessary to remove the backplate on the back of the motherboard and the two brackets, as the cooler is attached directly with the four screws from behind without a backplate. This is acceptable at this size, or if it were, the threads of the screws would be approx. 0.5mm rather end. You can see very well in the photo of the ITX board that the pressure gets too big and bends through the board. The motherboard is not a cheap 4-layer lightweight bolt.

As always, the problem is the CPU or their unavailability, because such a Ryzen 5 2400GE is now typical OEM feed, but hard to get and it is unfortunately not sampled by AMD. That's why I took a Ryzen 5 2400G, adjusted the clock rates of the GE version and also adjusted the voltages so that it corresponds to the GE in something. It's not absolutely congruent, but it fits pretty well. 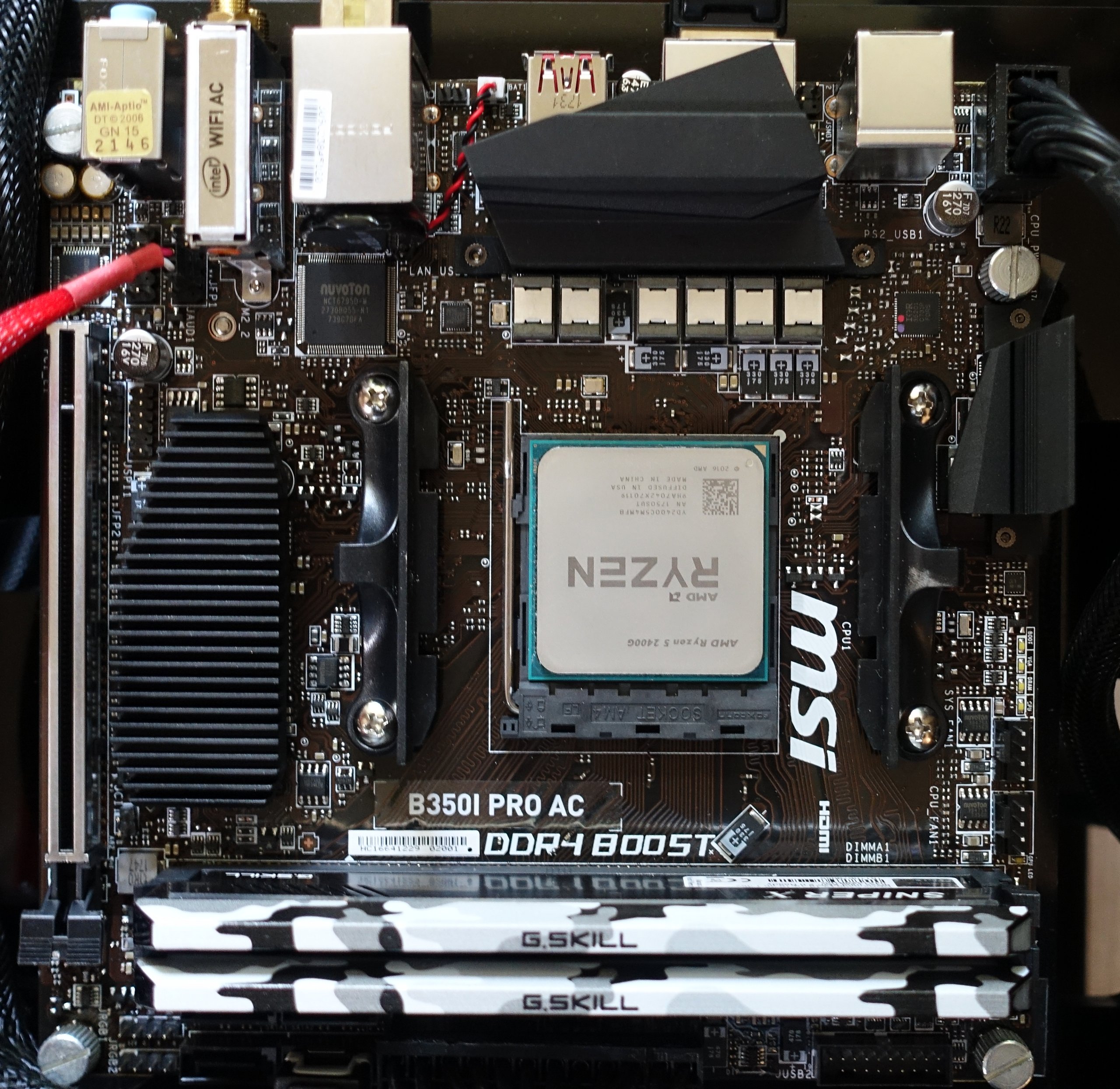 Here again the complete test setup, before it goes back to the finished:

Price driver MLCC – much becomes more expensive (and worse) unnoticed, because in the industry these capacitors are becoming scarce
AMD also renders, only differently: ProRender should finally go to the finish line | Siggraph 2018