Bang frog, China-Böller, widowmaker – for the range of selected cheap cruelties from the Far East there are many harmless paraphrases. But that this electronic waste is literally fire-hazardous, I had to learn (once again) first hand during a short experiment. But trial makes you smart and so I didn’t let what I wanted to do without supervision. And as life likes to play: thank God!

The trigger for this time’s dilemma was a not-so-old Stability Power LPJ9-25E 3*SATA from Linkworld (yes, I know I should have known) with 420 watts of labeled output power from 2015. The whole thing was installed in a 3-year-old finished PC with an Intel Core i3-6100 without a dedicated graphics card – the typical Office PC. Since the power supply uses a separate 5-V branch, it should also act rather unproblematic in standby mode.

The aim of the action was to knit a childroom-ready entry-level solution for a future generation of players from this secretary’s delight from PC, simply by installing a suitable graphics card and a little more memory. All this is usually done in a few minutes, but I still check from home for several hours whether such a construct actually works. 420 watts? Well, let’s see…

Since the power supply does not have a 6-pin PCIe connection for the graphics card, I (courageous as I am) used a Molex adapter, because a cheaply shot MSI R7 370 Gaming 2G does not nibble 150 watts out of the can even in extreme cases. With approx. 220 watts tip for the overall system should still be able to do this despite the low-cost label, even according to the type plate. The 17 amperes at 12 o’clock are not a killer performance, but that should be enough.

All of this worked for the first time, but only for about two hours. Then there was a hissing, a bang and, as dessert, an extremely biting stench, which I still had in my nose two days later, despite hours of airing. Graphics card vs. PSU and it was 1-0 Why one of the Primarylkos burst is of course difficult to clarify in hindsight, but he should have been responsible for the hissing and the bang. Good China goods, because the Fuhjyyu MK is one of the nastest things you can install anywhere. You really have to make a big bow to this sham. Incidentally, the four 1N5406 smouldered still worked afterwards, while the capacitor and coil were only waste. 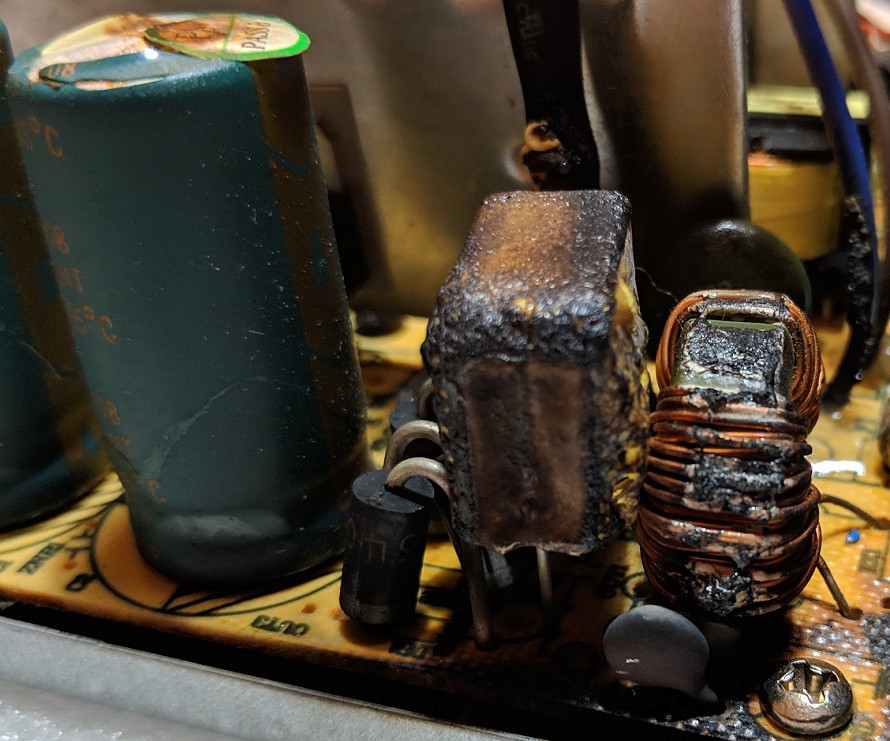 Since the power supply is advertised with all sorts of protective circuits, it was also surprising that the PC continued TO run AFTER the Big Bang and the brooding of the chemical soup from the Elko. It is also bad that the fine fuse was still complete and has not melted (as one might have expected). The cheap hard paper board, on the other hand, was already burning, especially at the edges. Fire retardant is something else

The built-in Weltrend WT7520 can do anything, but no real protection. OVP and EIA (protection against overvoltage and undervoltage) may still be there, but the advertised SCP (short-circuit protection) should have directed the fuse. But it doesn’t. If left unattended, all this would have ended in a veritable electronic fire, which could also have had nice consequences in a furniture store (where the bang box originates).

The worst thing is that these parts are still sold as LPJ and LPK series and also find en masse clones of this unfortunate technique in many cheap SI enclosures. How much you paid for the CE label and who took these things off at all remains in the gloom.

Such scrap, which can be purchased for USD 9, is brand-destroying and life-threatening. Even though many component buyers are now healed and order a little more consciously – a complete housing with power supply for less than 30 euros can do nothing. Only that the buyer likes to hide it here, that the empty housing costs something and therefore there are no 10 USD left in the EK for the power supply. or a system integrator unscrupulously calculated with a pointed pen.

I don’t want to say anything about ready-made PCs that have been suitably stocked, because companies like Delta, FSP or even Seasonic also offer SI power supplies in bare tin garb for small money. But not for less than 10 USD, where not even Mother Theresa would be able to put something sensible in the box. Retail prices of less than 40 euros (online under 30 euros) are always a first indicator of a potential incendiary bomb. And that’s exactly what you shouldn’t do. Austerity and greed are not the same.

If you have already had similar experiences yourself and can even contribute pictures: you are cordially invited to post this here in the forum. If enough comes together, I like to make a photo series out of it and see the post as an agreement for a possible publication in a picture story.

I can only warmly recommend the following article to everyone:

On discovery: How safe, durable and quiet power supplies are produced