New color, new name, new happiness? It's been a bit since AMD announced the Radeon Pro WX 4100, WX 5100 and WX 7100 professional graphics cards. Then nothing came for quite a while. Meanwhile, the Radeon Pro models WX 410...Exterior and connectors With the Radeon Pro WX 7100, AMD is putting a blue single-slot flounder on the shelves of retailers, which in its dimensions largely corresponds to the predecessors FirePro W7100 and FirePro W7000 and also certain similar features. Let's move on to the most exciting question, performance. We have deliberately used original versions of widely used applications and added only a few completely synthetic benchmarks. Since we also pass each pass with three iterations... Measurement methodology and graphical representation This time we use a more reader-friendly evaluation of our oscillograph measurements. In addition to the usual, very high resolution measuring curves, we now also offer a parallel display of... Temperatures and clock rates First, let's look at the temperature development of the OpenGL loop with the 1000 stones and also keep an eye on the actual available clock of the GPU. This is hardly lower in the average, even... AMD's Radeon Pro WX 7100 with the Ellesmere XT reminds us a little of the current Fiat Tipo. You get a lot of performance for the money, usually even need much less and, despite all the positive points, is annoyed every now and then about unnecessary small things.

New color, new name, new happiness? It's been a bit since AMD announced the Radeon Pro WX 4100, WX 5100 and WX 7100 professional graphics cards. Then nothing came for quite a while. Meanwhile, the Radeon Pro models WX 4100 and WX 7100 are available and have also appeared in the shops, while the Fire Pro WX 5100 has been somewhat delayed.

UPDATE 1. December 2016: With today's update this on 24.11. published article, we review AMD's new drivers and the revised BIOS, which address virtually all of our criticisms. Detailed information about the content of this update, which affects nearly five of the six pages of this article, can be found later on this page.

The smallest of the three graphics cards, the Radeon Pro WX 4100, has the Polaris 11 GPU in full expansion, which means 1024 shader units – more than what the Radeon RX 460 offers in the consumer range. The performance is given at a maximum of 2.4 TFLOPS and the memory expansion is only four instead of eight gigabytes. The other two cards, on the other hand, rely on a Polaris-10 GPU with twice as much memory.

While the Radeon Pro WX 5100 has a trimmed Polaris chip with 1792 shader units (Ellesmere Pro), which is good in the end for a maximum of 3.9 TFLOPS, the Radeon Pro WX 7100 we tested today relies on the full expansion of the Polaris 10 GPU (Ellesmere XT) and thus has over 2304 shader units. The EIA called by AMD is now easily undercut by the street price as usual, which could make it all the more interesting

The card has 32 ROPS and 144 TMUs as well as the mentioned eight gigabytes of GDDR5 memory, similar to the Radeon RX 480 – which is nothing more than the consumer sister. However, this only clocks at 1750 MHz, which explains the slightly lower bandwidth. This selection is perfectly understandable for a single-slot design in which avoidable waste heat is important for every watt when cooling. 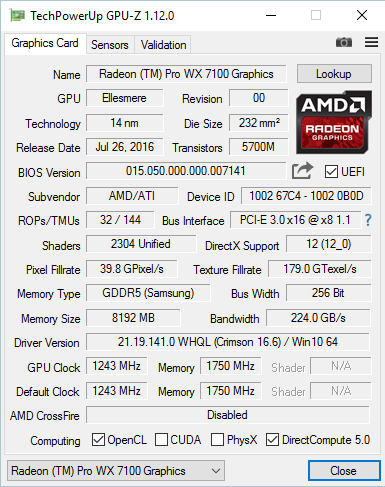 Otherwise, the cards differ only in details, which we will question very sensitively later. The fact is that the Radeon Pro WX 7100 is definitely the more economical RX 480 and we are curious how well the implementation was successful in the end.

With the Radeon Pro WX 7100, AMD is aimed at a fairly large target group, which should include developers who rely (must) on certified hardware to create VR content. For this group, a 700 euro card (street price) is quite a tempting offer.

But what do we actually want to test and even more precisely ask: Who is the Fire Pro WX 7100 supposed to compete against?

Since we also want to use certified hardware that excludes consumer cards at the start of the program, only workstation graphics cards are used. From a price point of view, a direct comparison to Nvidia's Quadro M4000 makes the most sense here. In addition, we pack the FirePro W7100 and FirePro W7000 as direct predecessors in order to be able to draw a direct comparison to the performance development. So in the end there are four cards that have to prove themselves here.

In the first publication of this article, we have had to address several points that have not yet been to our full satisfaction.

This first included a problem with the installer of the new Radeon Pro driver, which did not recognize all the new WX workstation cards and initially required an older card to install the device drivers on the system in the first place. Get. This issue was finally resolved after some internal beta versions that AMD's driver team provided to us in Toronto.

There were also crashes in Solidworks 2016, for example, when FSAA was activated. This issue was also reproduced with the driver team and quickly resolved. It should also be added that the bug we reported in Creo 3.0 (M90, Antialisiasing active) has now been completely fixed, which led to program crashes.

In addition, there was a handy driver problem with the Intel Xeon E5-2640v4 on an X99 workstation motherboard, where the memory in the idle stopped clocking down properly, so that the power consumption was above average at 34 watts. This too has been fixed and additionally documented with a new measurement in the article.

AMD has now put this beta driver online and will soon submit a WHQL driver with these changes.

This is where the thermal problems that we were able to document under full load come into play in the first publication. Since the sample sent to us according to AMD is supposed to come from the pre-series, the fan curve was still far too optimistic and the speeds definitely too low. We informed AMD about our measurements before the original article was published and pointed out a necessary correction of the fan curve.

Comparing the production BIOS now in use, which AMD provided to us yesterday, we were able to measure a significantly tightened fan curve that ended up making the card run a proud eight Kelvin cooler. We also incorporated this pleasing development into the article in the before-and-after style and supplemented both the fan curves and the new infrared measurements.

Before we start testing and post-testing, however, we have summarized all the relavant data of the three new Radeon Pro cards in tabular form:

In order to stay as realistic as possible, we already use our crossover workstation developed in cooperation with the Hamburg-based company Happyware and use only pure workstation components in this configuration – in particular an Intel Xeon E5-2640V4 and a very well-memoryD X99A workstation motherboard from MSI.

The results achieved here are – already due to the other platform and the newer drivers – no longer comparable with the values of older articles. We would also like to point out that a lot of professional programs require certified hardware and of course workstation graphics cards. However, many companies – including Autodesk – are now relying on DirectX instead of OpenGL, so there are applications where consumer technology could be used much more cheaply.