With the EK-Supremacy EVO Threadripper Edition we reached a block of a water block, matching AMD's plinth TR4 (SP3) including mounting plate and pre-assembled screws. Even if the manufacturer covers a niche with it - interesting i... Installation and commissioning What has disadvantages (water block not so easily rotatable), of course also has advantages. That's why we don't pull anything off in the B-note. The installation with the fixed screws is absolutely unproblematic and the stoppers...

With the EK-Supremacy EVO Threadripper Edition we reached a block of a water block, matching AMD's plinth TR4 (SP3) including mounting plate and pre-assembled screws. Even if the manufacturer rather covers a niche – this product is already interesting.

At the launch of the Ryzen Threadripper we were still dependent on a water block that was subsequently adapted by means of brackets and an all-in-one compact water cooling system, which was also subsequently made compatible, but now there is finally the ultimate cooling-popper. Well, yes. Hopefully. The cooler comes with the cooler including the mounting system, a manual and a tube of thermal conductive paste. You don't need more than that. The explosion graphic shows the structure of the cooler, which is no different from the well-known Supremacy EVO except for the enlarged Cold Plate and the larger overall dimensions. 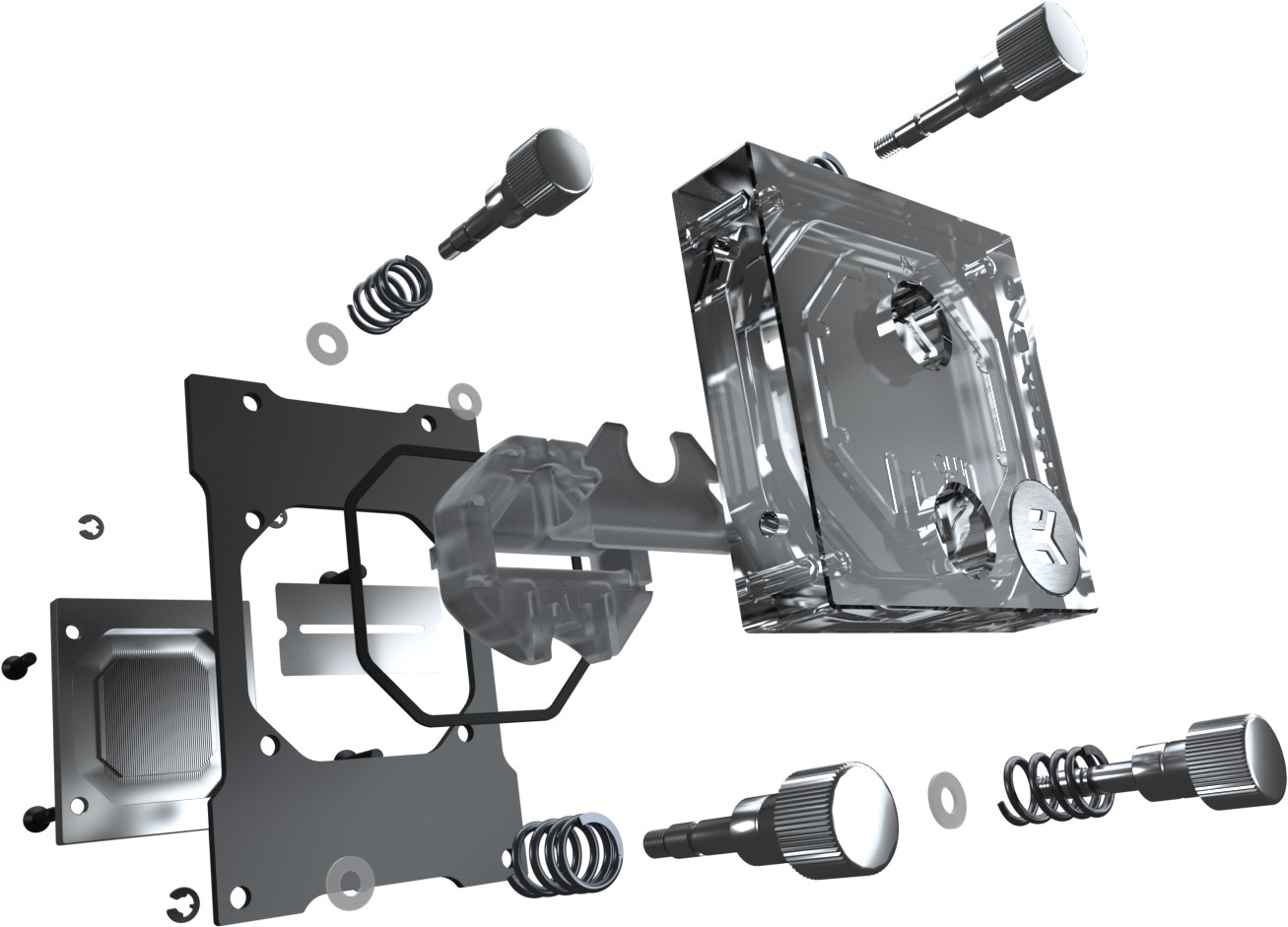 We use the version with acrylic cover, which we generally like better, as it also makes it easier to get attention to possible impurities in the system. Since AMD's socket is asymmetrical in terms of the screw thread, you won't have to avoid screwing the block apart if you want to turn inlet and outlet on the top of the radiator. A suitable hexagon was unfortunately not in the case, but should be found in any well-sorted hobbytool.

A more accurate picture is given when you insert the block openinto the base. Since the whole thing remains square as an application, the story can be realigned as desired. We tested the block in two positionings and were unable to measure any performance differences as a result. So it's fitting. 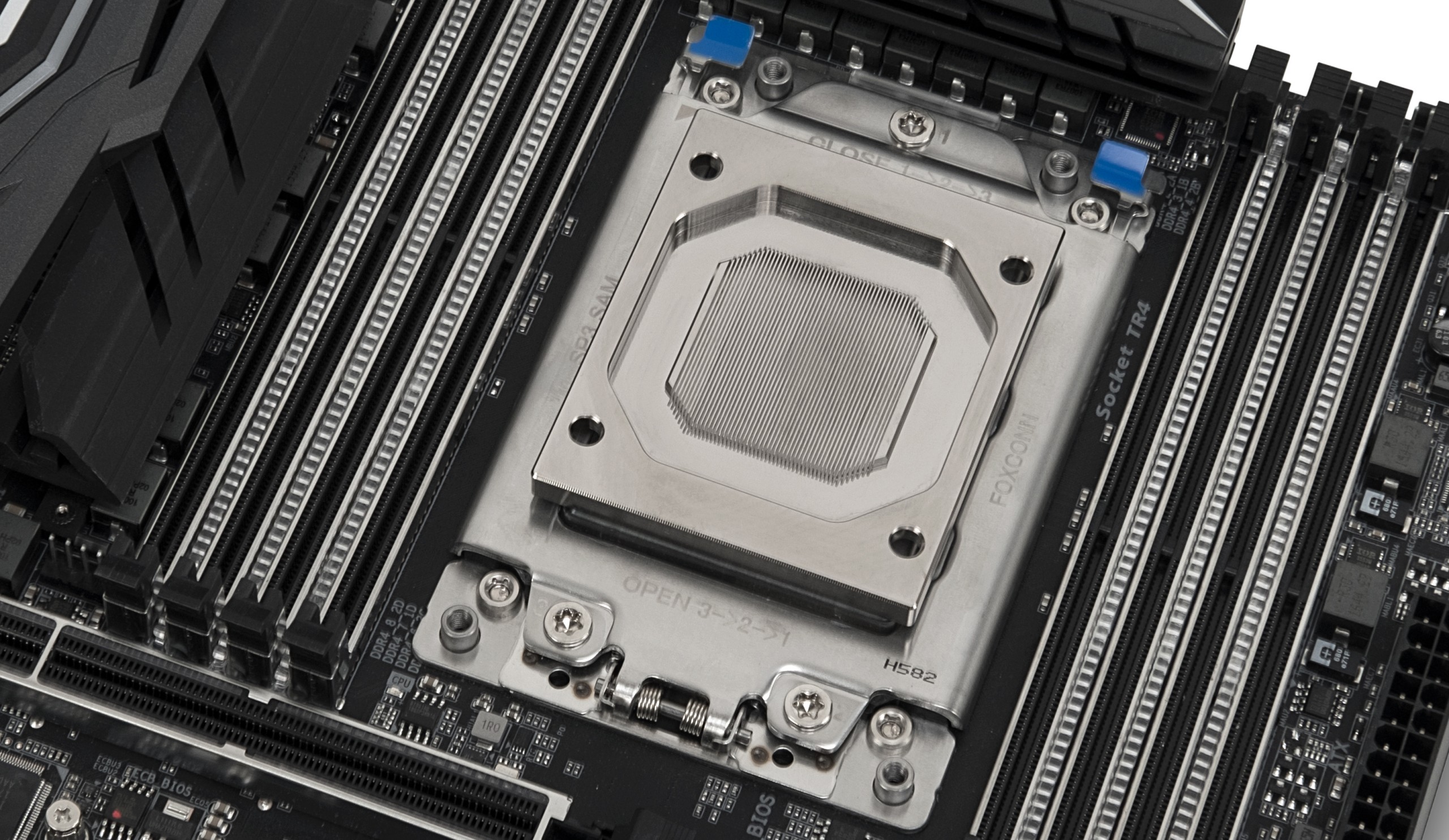 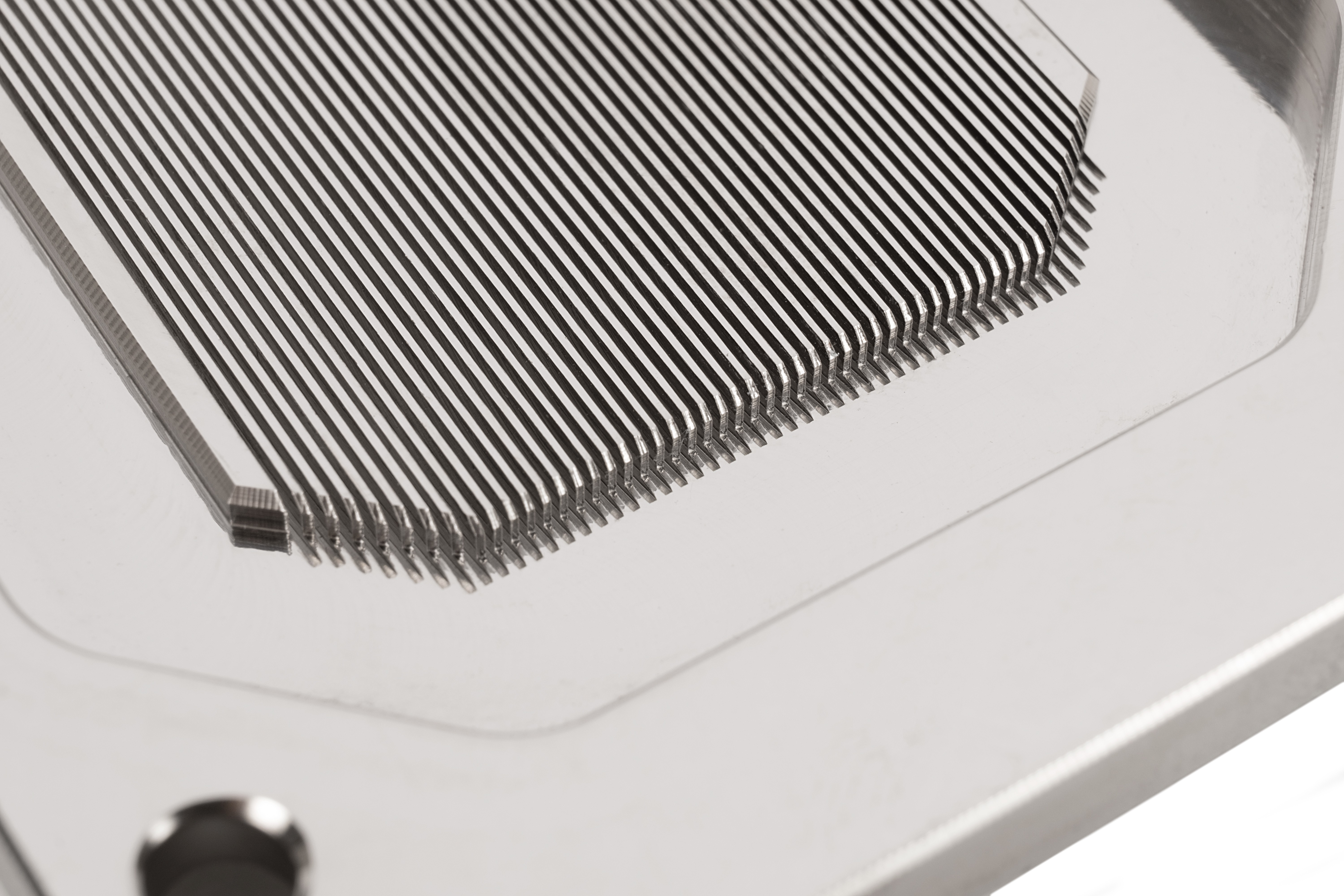 The total of 49 small fins yields a lot of microchannels that additionally enlarge the surface. The entire radiator interior is clean and neatly nickel-plated.

For the simplest possible use in our test system and the quick change, we again use quick-release fasteners and for safety also a set of filters – as always. 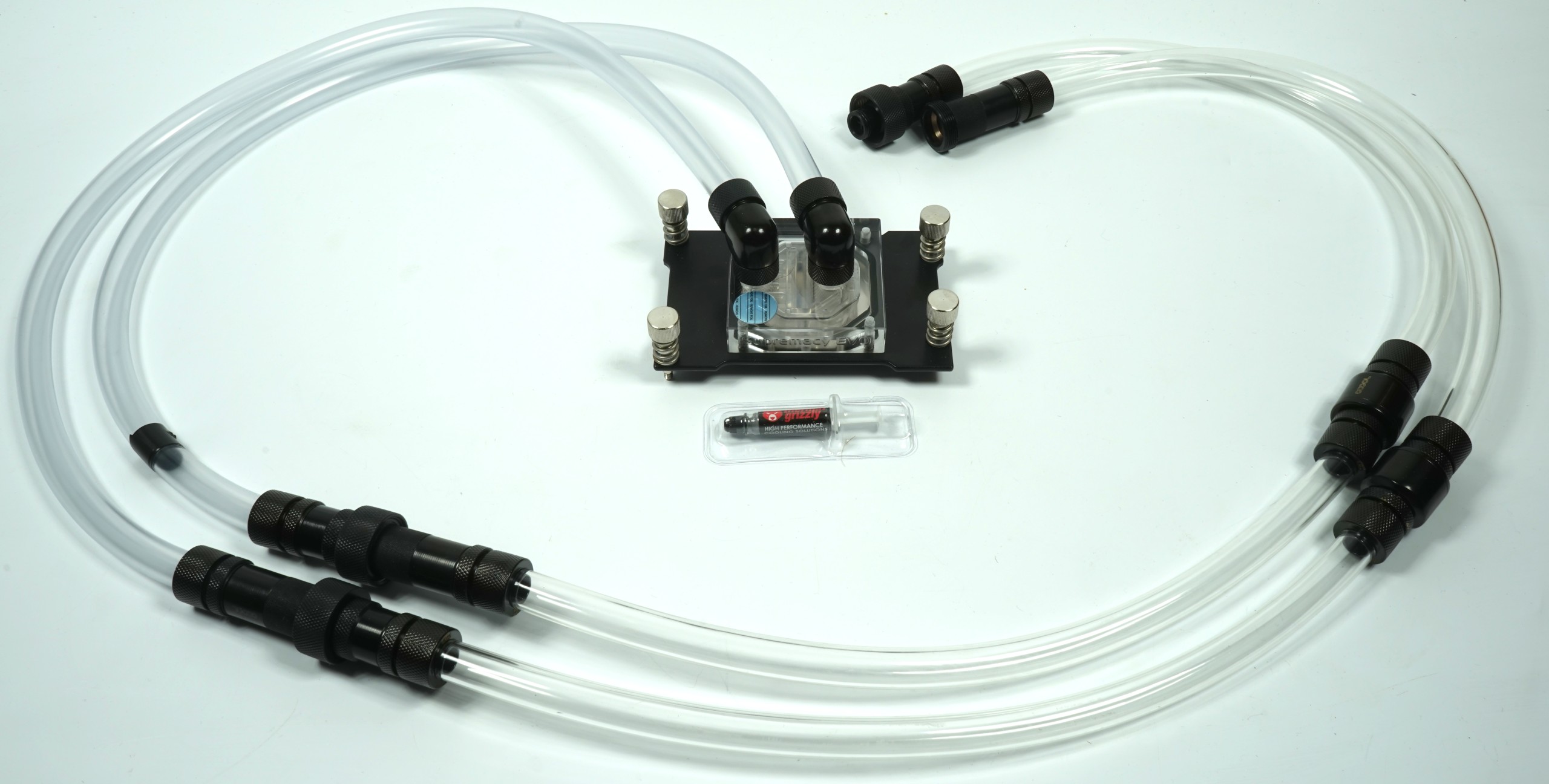 We have already described the new test methodology in the basic article "How we test graphics cards, as of February 2017" in great detail and so we now only refer to this detailed description for the sake of simplicity. So if you want to read everything again, you are welcome to do so. 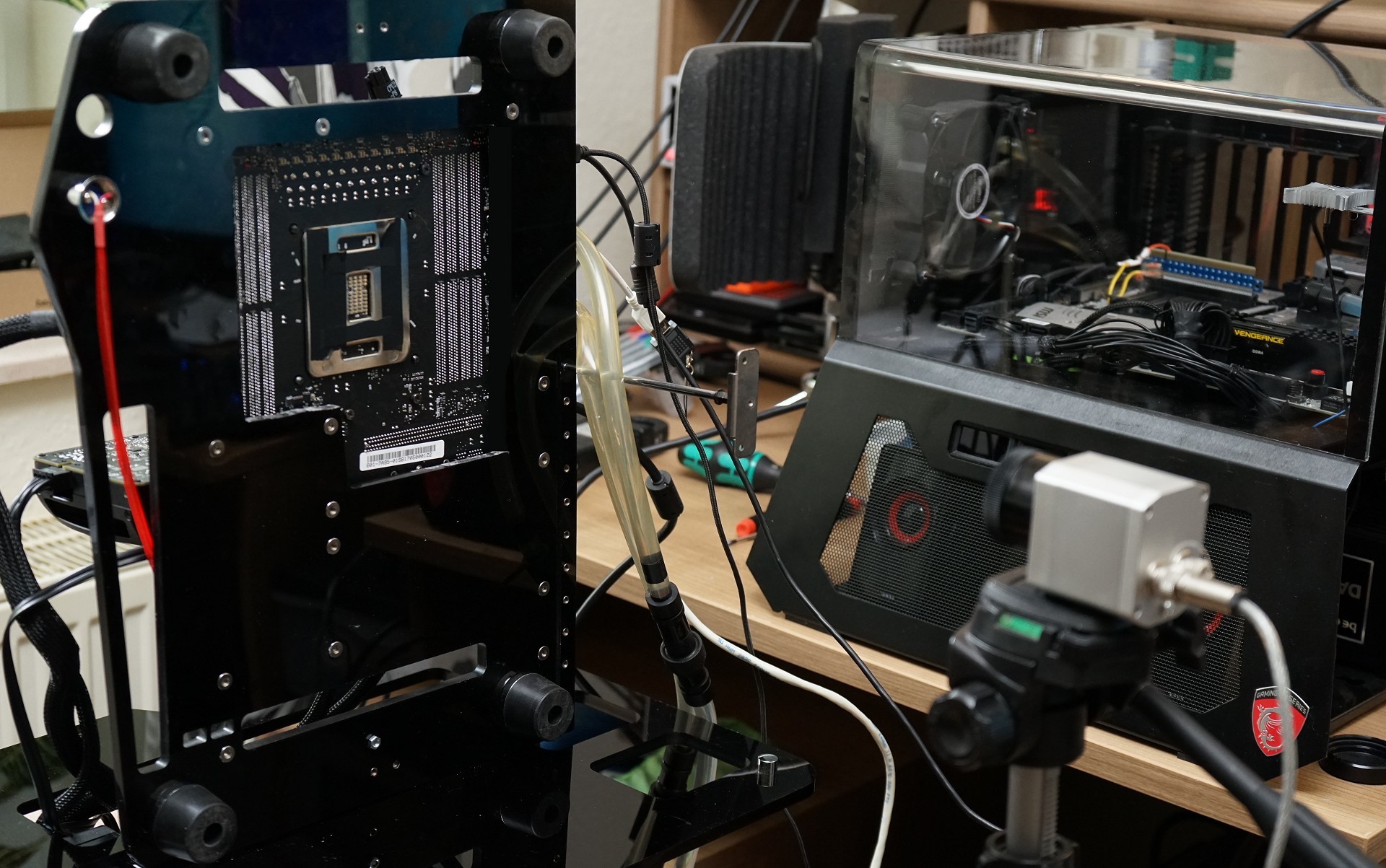 In this case, only the hardware configuration with CPU, RAM, motherboard, as well as the new cooling is different, so that the summary in table form quickly gives a brief overview of the system used here and today: