I’ll write out the product name once (almost) in full: S.M.S.L Sanskrit 10 MKII AK4493 HiFi 768KHz 32Bit XMOS USB Native DSD256 Decoder, then for simplicity’s sake I’ll just call the thing Sanskrit 10th MKII. The name with the 10-year anniversary has allowed itself the manufacturer to exactly this anniversary. I was intrigued by the AK4493 and the XMOS, the price of 100 Euro and the promise to be able to run everything directly on the PC without an external power supply.

As nice as my Beyerdynamic A20 may be, it can only do analog and what then comes analog from the PC’s ALC1220 is not really a revelation. Because you hear what you see and that’s not so nice at first. So an external DAC has to fix it. The two notebooks are even worse. It doesn’t cause nausea, but the limitations are just too strong. 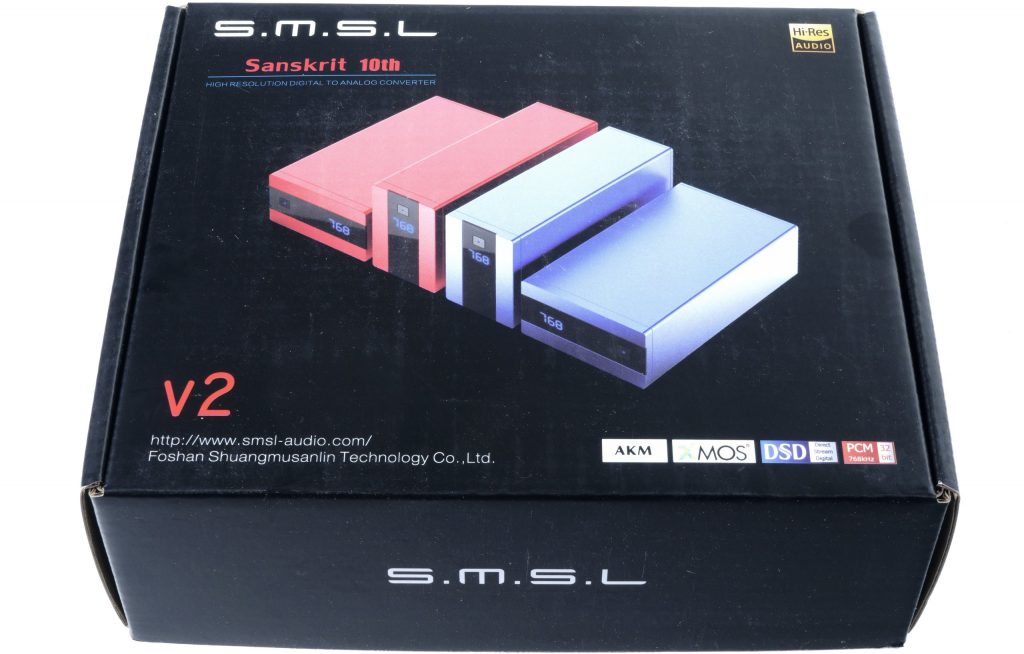 No sooner said than done, searched and bought, because after all it also said “Amazon’s Choice”. The 88% approval rating of 4 stars or better can be believed, but it doesn’t have to be. However, that both can be so misleading, I would not have thought in the end, but at least one is smarter afterwards. Again. But let’s unpack the black version first and see what’s in there. The almost 106 euros are not expensive, but also not cheap, so it is somehow in the middle. You get the DAC as a solid, small box made of powder-coated sheet steel, a USB data/charging cable, the rather meaningless manual and a remote control (without batteries). 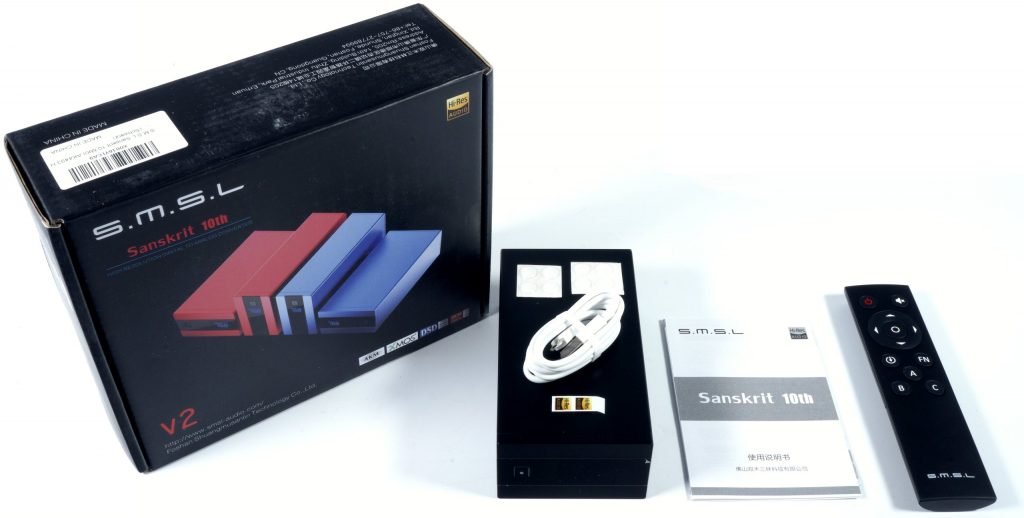 However, you need exactly this remote control to be able to finally configure the part (output level, filter), the rest can also be done with the multi-function button. If the remote control works at all. Unfortunately, it didn’t do exactly that, despite several (brand new) batteries being used. However, I already had the first hurdle to overcome here, as it’s a third-party vendor that lets you sell the product through Prime, but refuses to even provide support through very emphatic silence when contacting them directly.

A Shenzhen Longruixiang Trade Co Ltd was this in my case and it was and is definitely impossible to get uncomplicated replacements for the remote without everything ending up as a return on the garbage. Unfortunately, sustainability is a different matter, because these remote controls are standardized mass-produced goods in almost all SMSL products, no matter how expensive they may be. So it’s not a vendor sale, and it’s far too easy to overlook on prime that it’s also not an Amazon direct sale at all. A middleman, then.

That can happen with such a defective remote control and it would not have been a reason to write a review. I’ll be fair. So I took a closer look at the part and also tested it as far as I could with the factory settings. The handling is quite simple, because the DAC knows a total of three inputs. Coax and TOSLINK, as well as the USB (compatible with PCM signals up to 384 kHz and DSD256), which was and still is my connection of choice. You can see very nicely that there are even two of the USB-B (Micro USB) books.

The front consists of a punched steel panel and an inserted plastic window, behind which there is an LED display, the IR receiver diode for the remote control and the aforementioned button. That’s all there is to marvel at. By the way, you can also operate the part rotated by 90 degrees and upright, then the display content also rotates (dual display). Nice move, because you won’t always want to run everything across the board. Depending on how you want it, you can glue the small rubber feet to the underside of your choice. Plus point.

Since I will send the DAC back again for several reasons, I will do without the teardown this time and use a picture as well as the details of the manufacturer for the description of the circuit and the construction, which finally induced me to buy it. 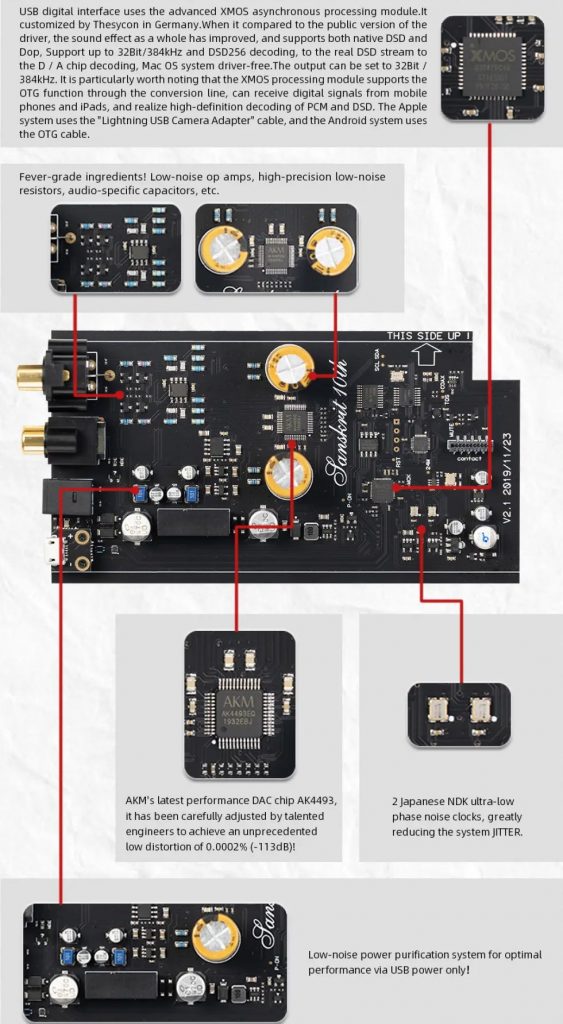 Before I get to the test use and review on the next page, let’s review the technical specs: 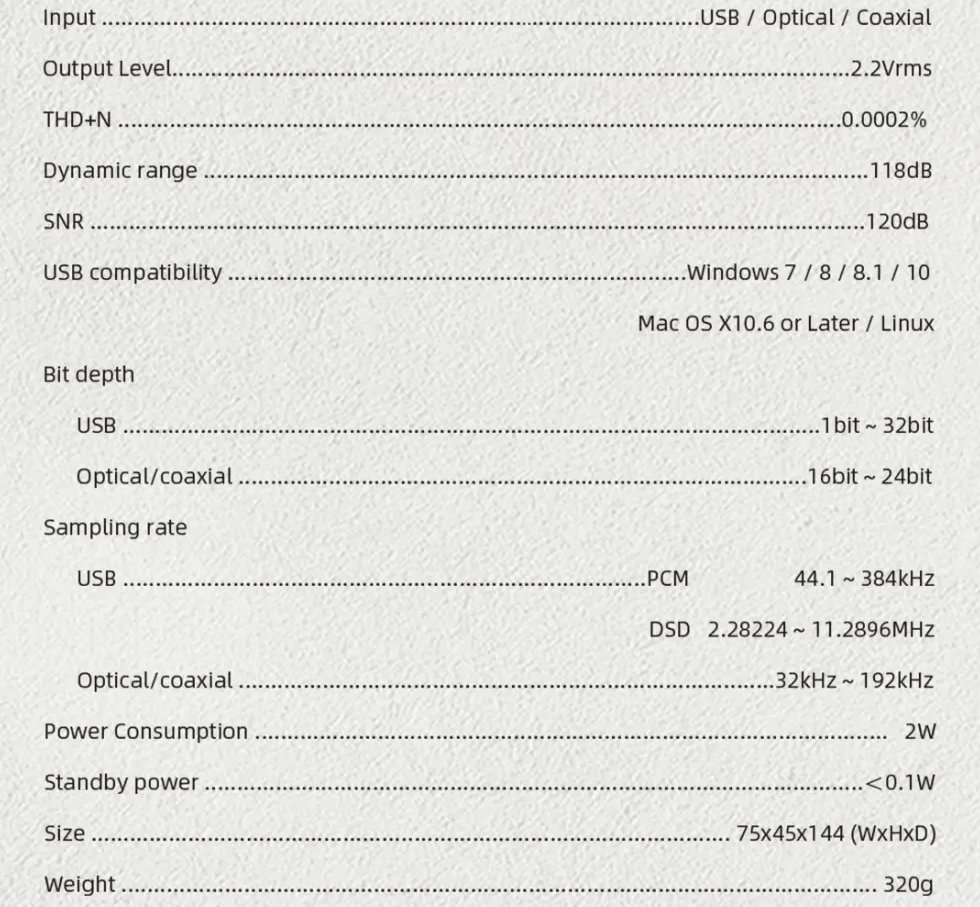