Short presentation and technical data You have to be quite optimistic to call such a small 2.0 system impact, but be it. The acoustic impact will probably not be done, against which of course the pre...

You have to be quite optimistic to call such a small 2.0 system impact, but be it. The acoustic impact will probably not be noticed, but of course the price speaks for it. But what does such a small system do, which it can use for a street price starting at approx. 43 euros there, then really? Bargain or miracle bag? As always, the truth is likely to be in between and that's why we're testing this device in more detail.

The scope of delivery is rather modest, because in addition to the active and passive box, there is only the connection cable to the passive, left speaker and a RCA jack cable for connecting to normal 3.5mm jacks such as a PC or a mobile device. That's it.

After all, it is important to emphasize positively that only the power cord is fixed, while you can equip both the left speaker and the audio input with your own longer cables if necessary.

The body of quite neat MDF is matte, while the fronts in piano lacquer look gpathize for attention (and finger marks). The folding is not very carefully executed at the edges, but mainly only applied and not generously glued. The active part is housed in the right box, as well as the right-sided controls for volume, height and depth control, as well as a status LED for the operating state. 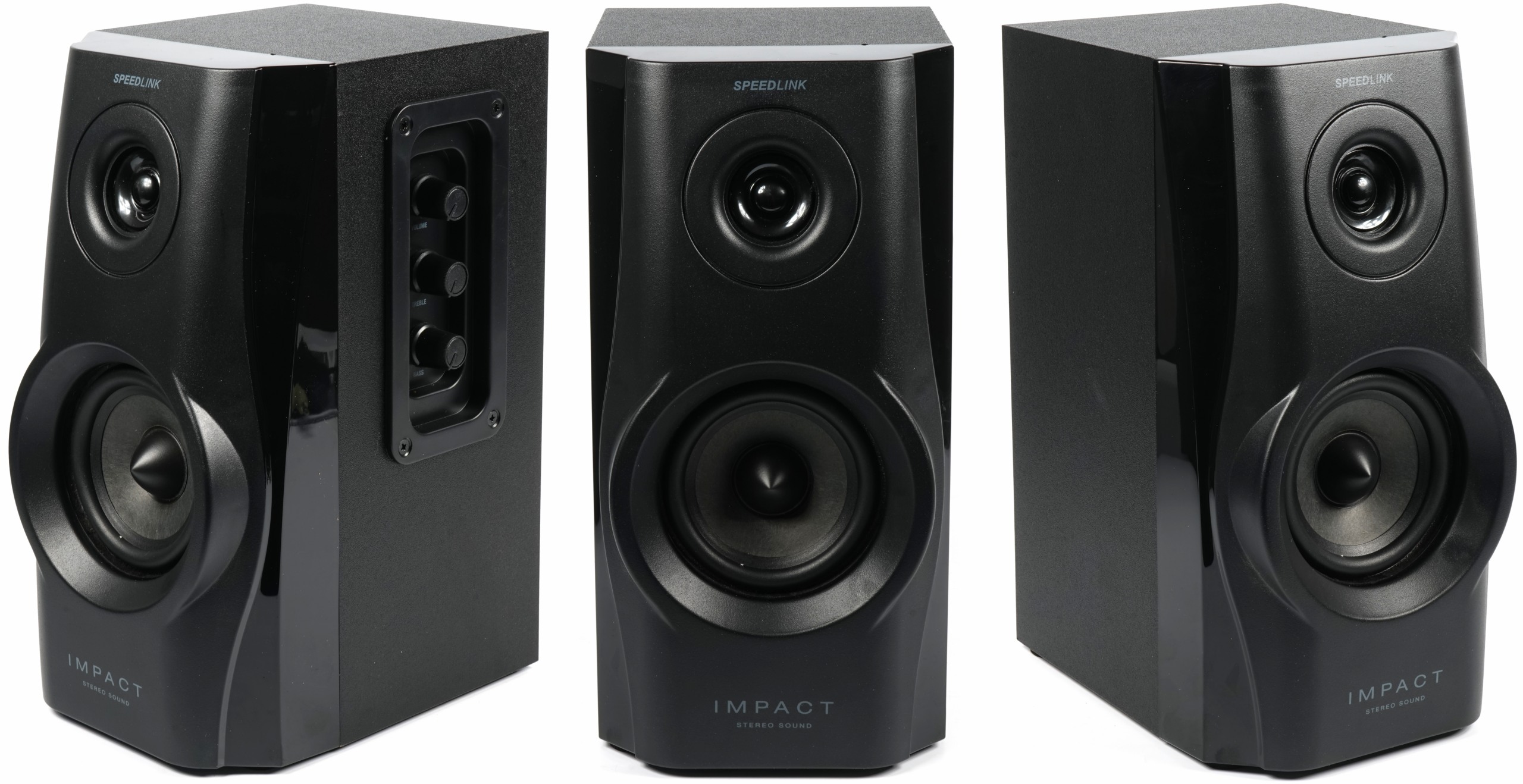 The positioning of the connectors is simple, but not "idiot-proof". The RCA input for the stereo signal consists of the usual red and white beech. However, the loudspeaker output is also white, so that there can be confusion with unconcentrated viewing. Yellow and black sockets or Cables are definitely not a witchcraft and not even more expensive. 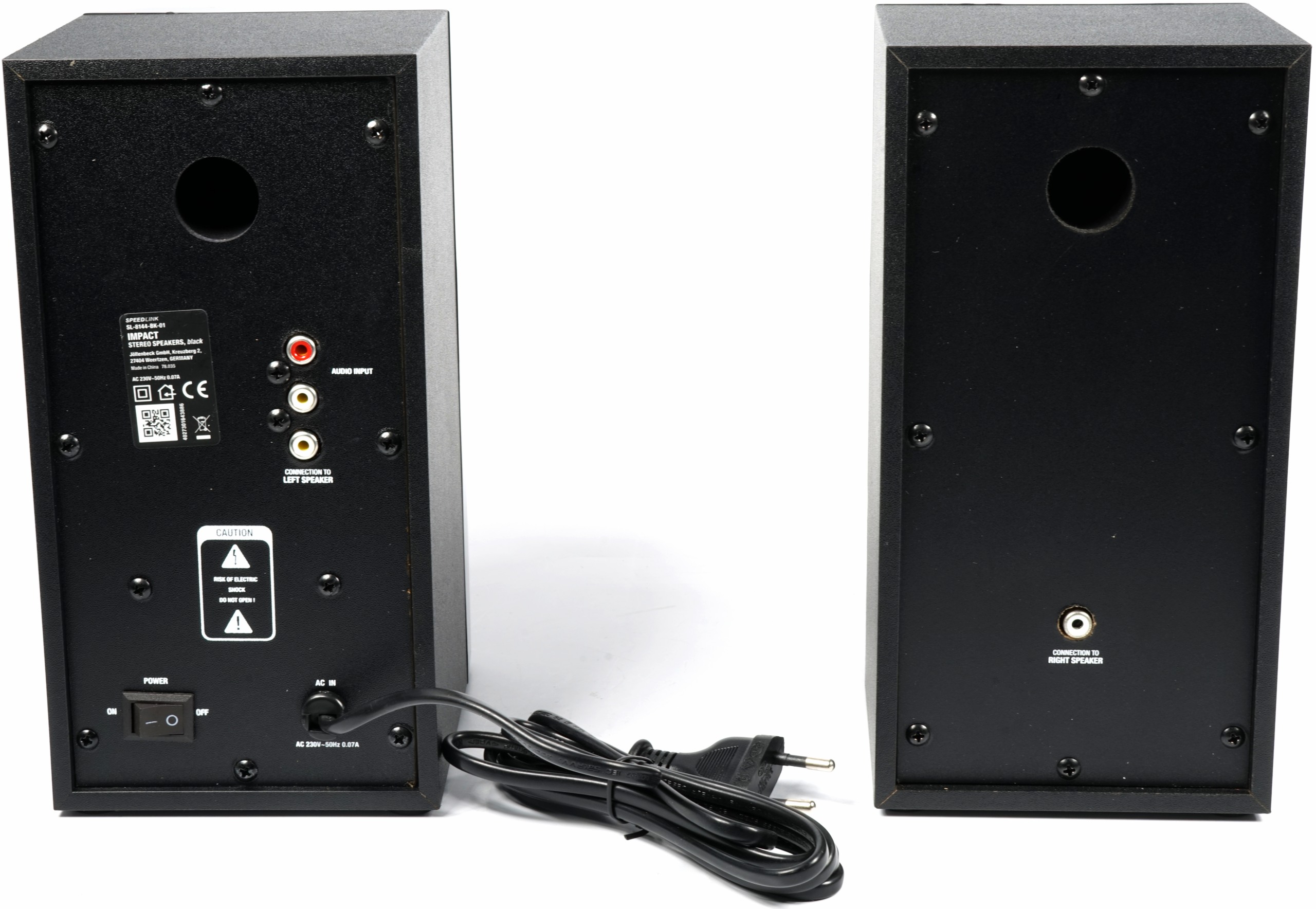 The physical power switch is to be evaluated positively, because with the installed technology, which also includes a standby shutdown after approx. 15 minutes promises, we werenot so warm.  Why, we read in a matter of times.

After all, we screwed up the active box once. Here, light and shadow meet hard.  We see a reasonably neatly glued body, a fairly usable 1-watt tweeter and a mid/woofer with 10 watts nominal load. Even if you advertise the whole thing as a 2-way system, however, you will not find a real crossover. The tweeter is in series with a small capacitor, but that's it. Well, the price… 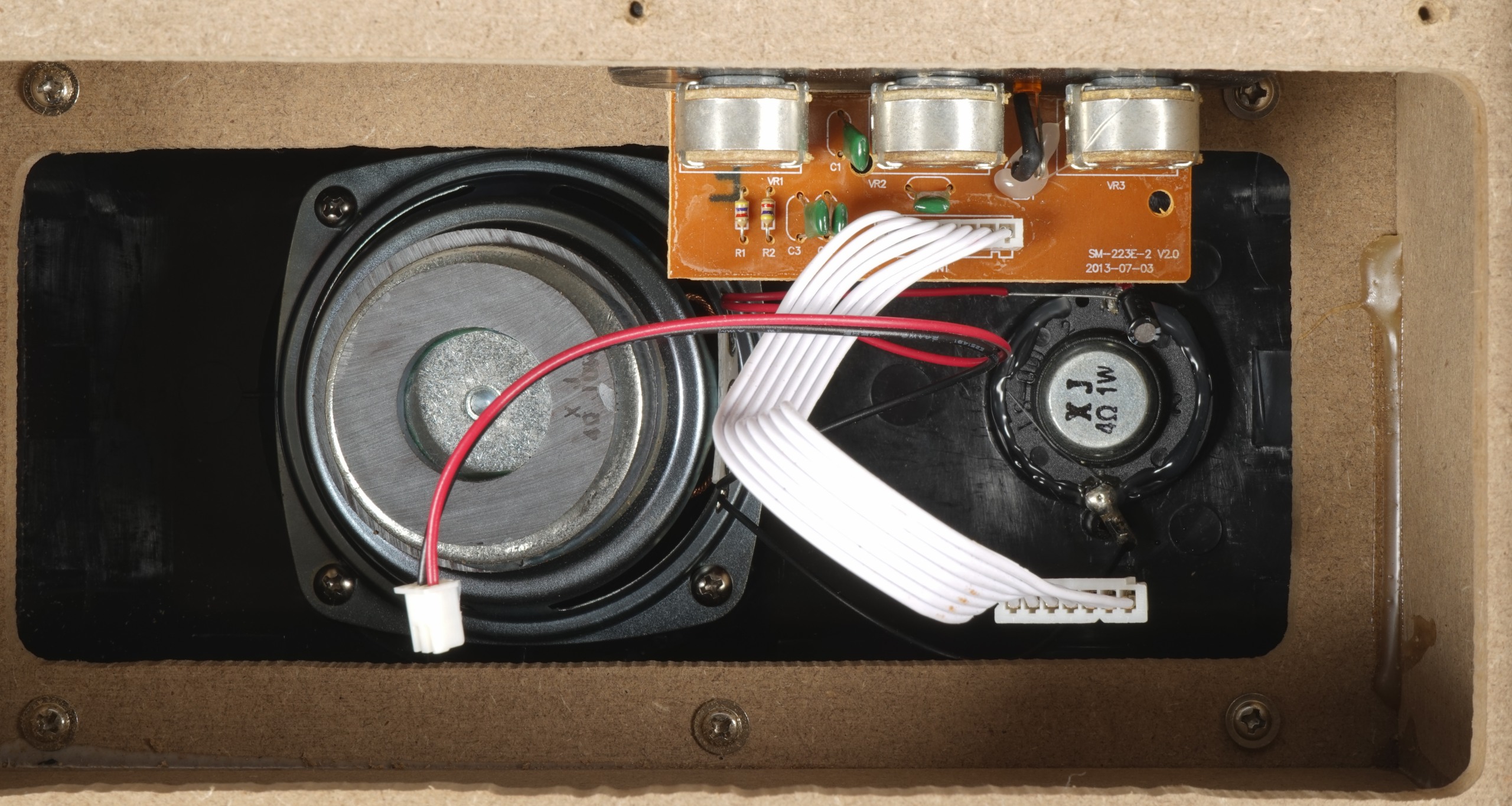 The chassis are open to the front and not protected, which we are very sceptical about, especially with the calotte. A false finger print, and the part is inabated.

We also see on the picture above the three simple potentiometers for the controllers on the side. The demountable and pluggable cabling then leads to the mounting plate made of MDF, which at the same time also represents the rear wall of the active box and carries transformer, amplifier board, as well as the glued-on bass reflex tube. 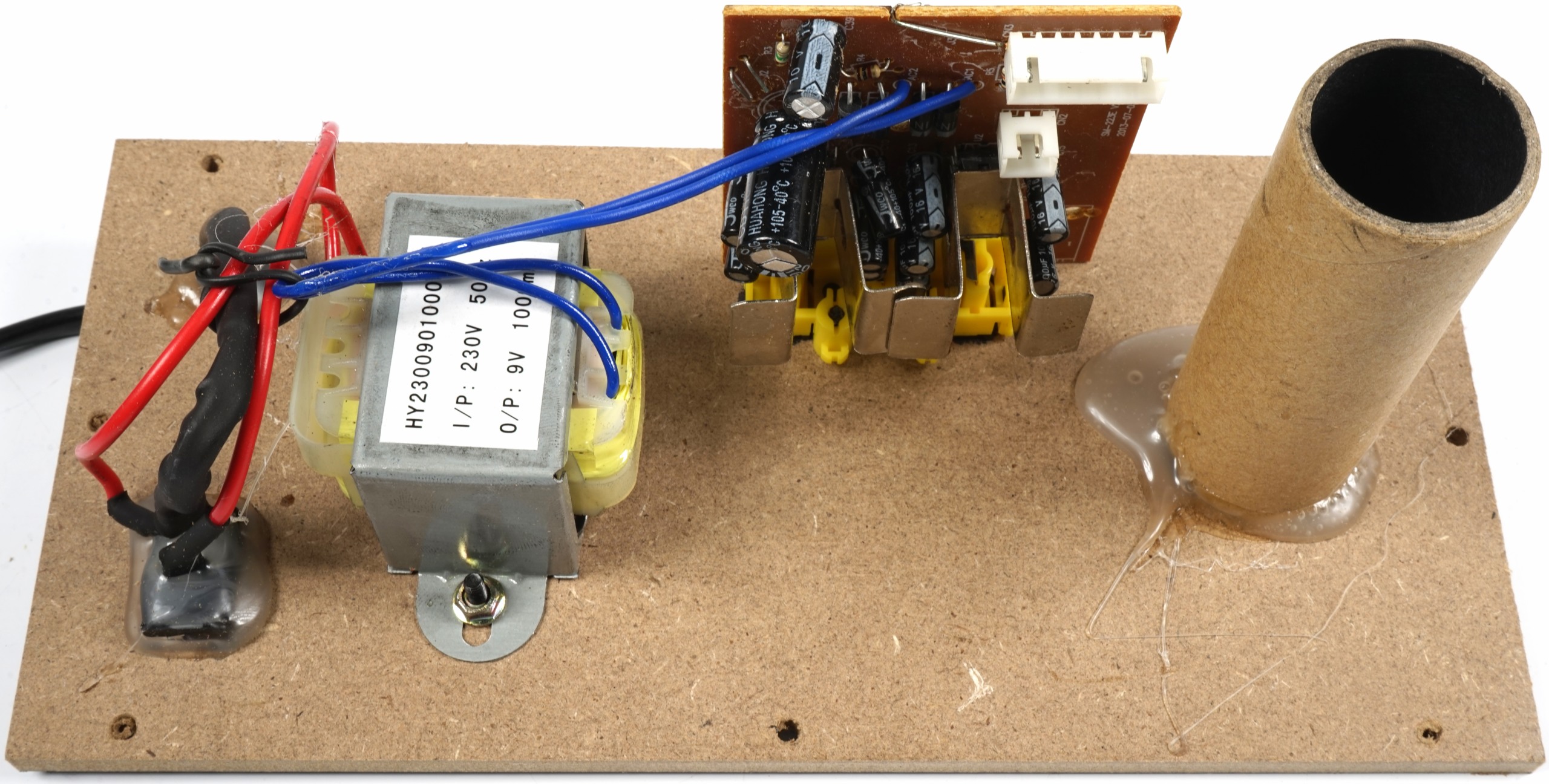 The simple M-core transformer has an output power of up to 9 watts at 9V secondary voltage. If one adds the usual losses and limitations, a maximum of 6 watts of this would probably be available on the amplifier, whereby we could not measure even 5 watts on the primary side with maximum control. 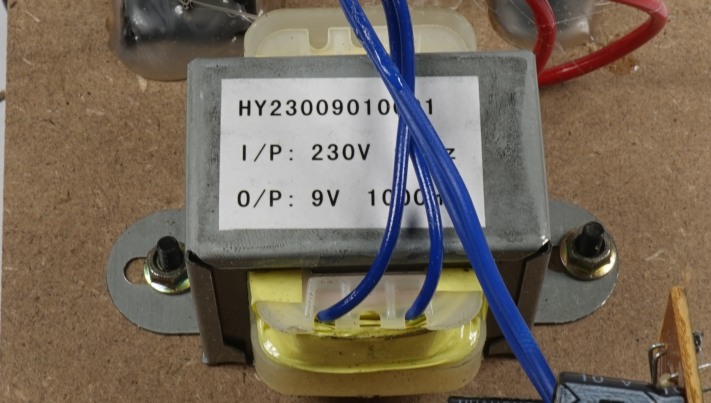 The Impact greets us immediately after switching on with an audible, brown-bear 50-hertz-brummton, which comes from the power supply, because apart from a simple Graetz bridge as a rectifier and a smoothing capacitor with 2200-F, there is nothing that could still somehow eliminate residual ripple. However, a real standby circuit with electrical separation of the power amplifiers is missing and the part never really becomes powerless in life.

The two amplifier channels are each equipped with a complete IC, which includes not only the power amplifier but also preamplifiers, as well as voltage-controlled sound and volume controls and can cope with minimalist external switching. The two heat sinks are simply soldered on the board and therefore carry themselves.

The measurable output power with an acceptable distortion factor is approx. one to 1.5 watts per channel, but it's already squealing about it. However, the specified 3 watt RMS per channel could well be correct, because the sensitivity of the box as such is quite high thanks to the chassis and lack of damping and no one knows how the evaluation came about in the first place. Music performance, RMS, PMPO, everyone just chooses something suitable. 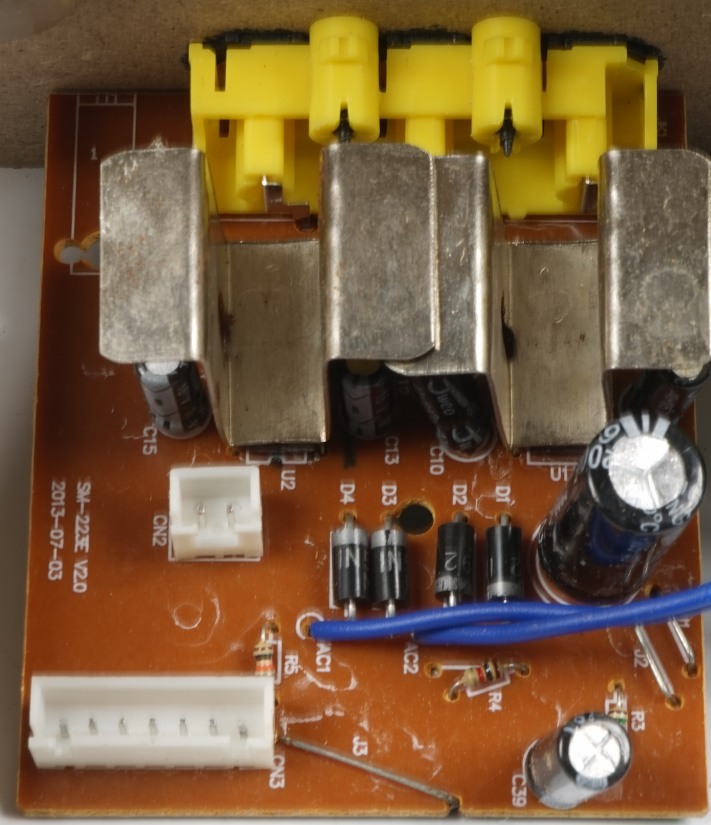 However, we would evaluate negatively the RCA sockets soldered on the board and the fastening with simple wooden screws, because it cannot be ruled out that more frequent insertion simply overwhelms the somewhat lax plastic holder in the shape of a plug. That looks a lot like a broken point for us.

If you leave the sound controllers in the middle position, you notice a slight bathtub tuning, but the sounding is within reasonable limits and the visible dents of the curve are probably more to the peculiarities of the chassis, as well as the non-existing of a clean lyre. 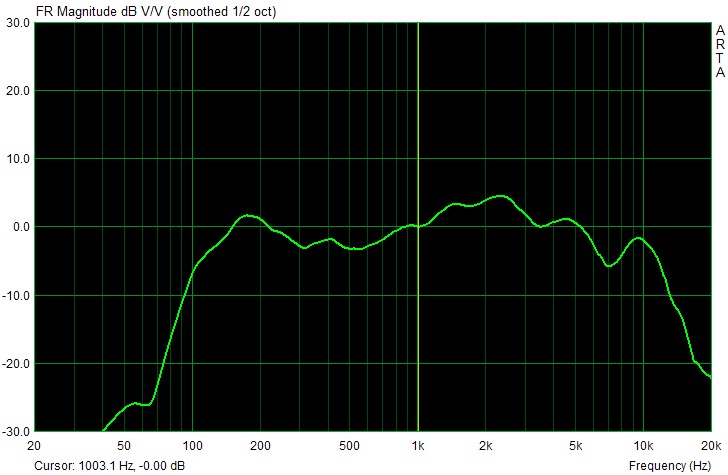 The fan controllers create, including the existing lift by the chassis or the tuning of the boxes maximum 6 dB, which is more than sufficient. The bass increase at approx. 175 Hz is due to the small box, it would not be lower anyway, because the level strength of the hopelessly underpowered power stage is far too low. This also expresses the dilemma of this construction, which could have become a real howler with 4 to 5 watts of sine per channel. So the acoustic impact becomes a rather delicate knock with the cardboard beer lid after the far too high calculation. Lowering the depths in the opposite case is quite helpful in finding the level, but the sound suffers extremely. Then rather middle position and parent-friendly room volume. But we've had that before with another product that we had recommended to annoyed parents just if they don't want to put a sound wave weapon on filius' desk. So a defect even becomes a feature. 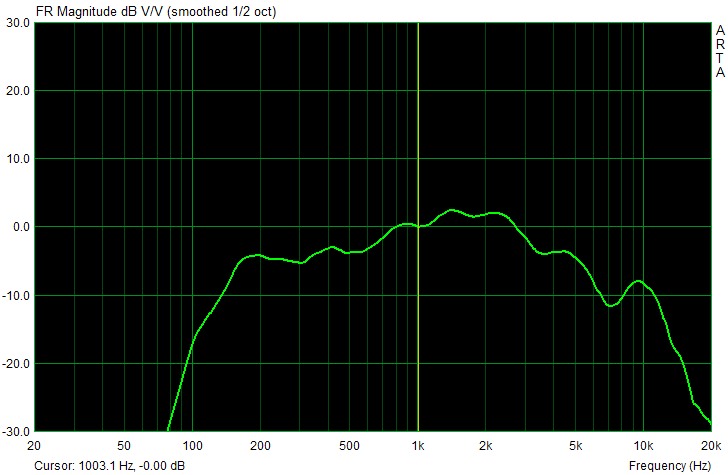 But let's get to the subjective sound evaluation, let's say, moderate room volume without superficially audible klirr. The bass is a bass and nothing remains of the deep black bass soul from the advertisement. The deflections of the membrane can often still be seen, but you can't hear them (more). The 80 Hz specified as the lower limit already carry a drop of 15 dB on the shoulders with them and underneath it becomes even more zappenduster. From approx. 100 Hz you can with the offered life and at least the upper bass is present again.

The entire mid-range sounds actually reasonably good up to the middle heights (in this price range) and balanced, which speaks for the chassis used. The peak at approx. 3.2 KHz, however, often makes the speakers seem louder than they actually are and thus also leads to overemphasis on many vocals. In some situations you even get a kind of station loudspeaker feeling.

The music rendition of the usual radio music is tolerable, although not for aspiring music lovers. Especially the fat cardboard sound leaves no doubt that the real bass is actually almost completely missing in the end. Well, and classic? Lack of level strength is the near-death experience par excellence for the dynamic range of many orchestral works. A pianissimo goes down in the net hum and in the finale Furioso the pretentious Fortissimo shreds into the acoustic hunting grounds. With almost all other genres in the E and U range, it hardly looks more advantageous. 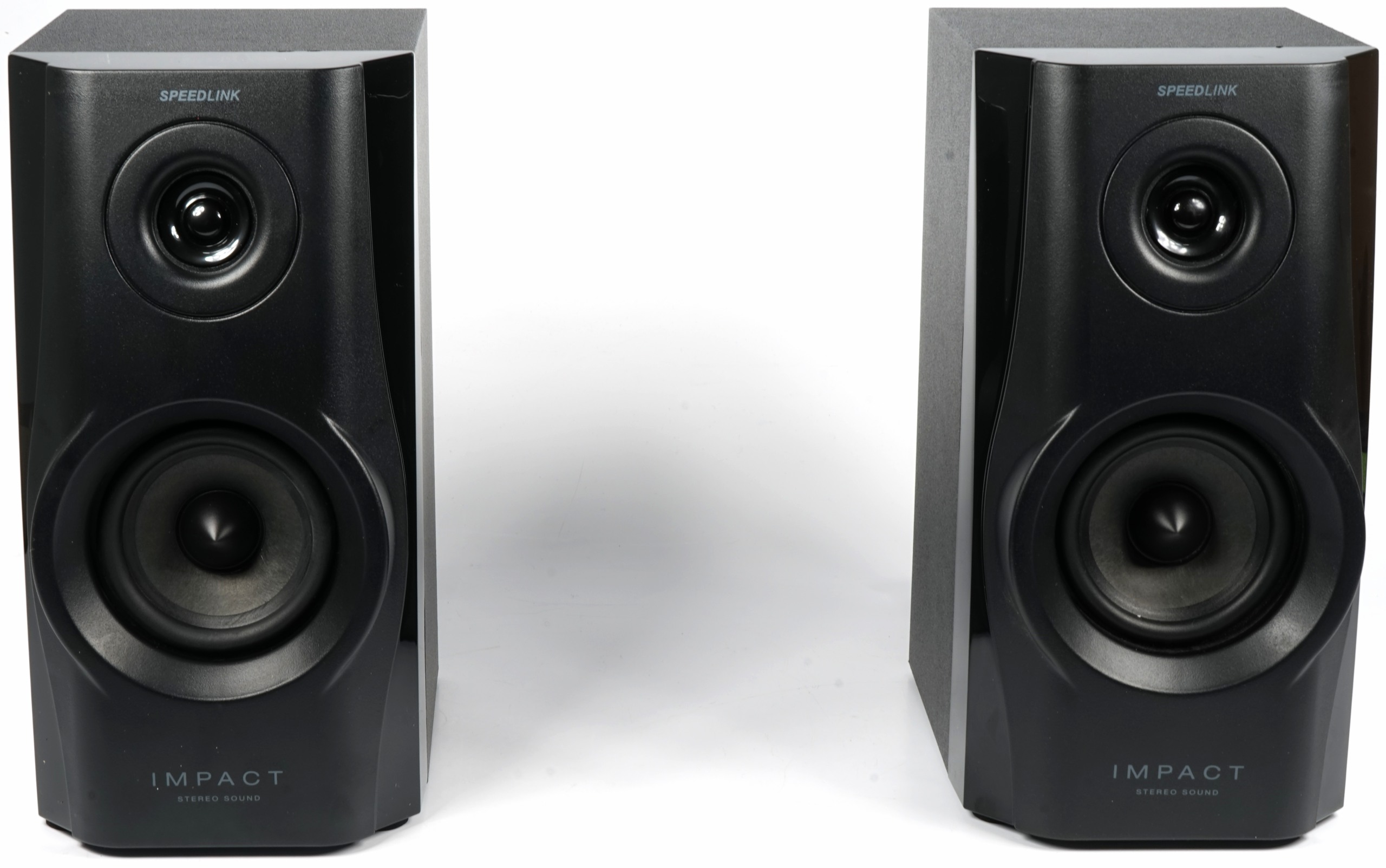 As a rather unobtrusive side-sonic device, however, the Impact is ideally suited and also for things like Skype & Co the sound characteristics fit better than with many upper-class cars. That's why we see the Impact more as a simple acoustic desktop food supplement, if it can be more than just a USB roar cube for the highly esteemed secretary in the company or the Filius Kevin-Klaus.

The price is simply not right. While the body is still solid press panplate baroque and the chassis still fit quite well into the targeted price group, the installed technology including the power amplifiers can no longer convince. Apart from the lack of smoothing of the residual ripple behind the simple rectifier bridge, it is above all the lack of output power that prevents a better evaluation

With a whole two watts for both channels in total, you can no longer pull out behind the oven in this price range, you really have to slice that clearly. With only a little more effort, you could easily achieve services with up to 3 watts of sine per channel without having to suffer financially a heart break at the OEM accounting party.

We see the product due to the bad electronics at approx. 25 to 30 euros, but not at the currently required 43 euros road price.

If you would like to find out about comparable or completely different sound systems, please refer to our "Audio-Roundup: 2.0- and 2.1-Soundsystems in the Comparison Test", in which you can then use the Speedlink Impact in addition to many other products. can also be found. 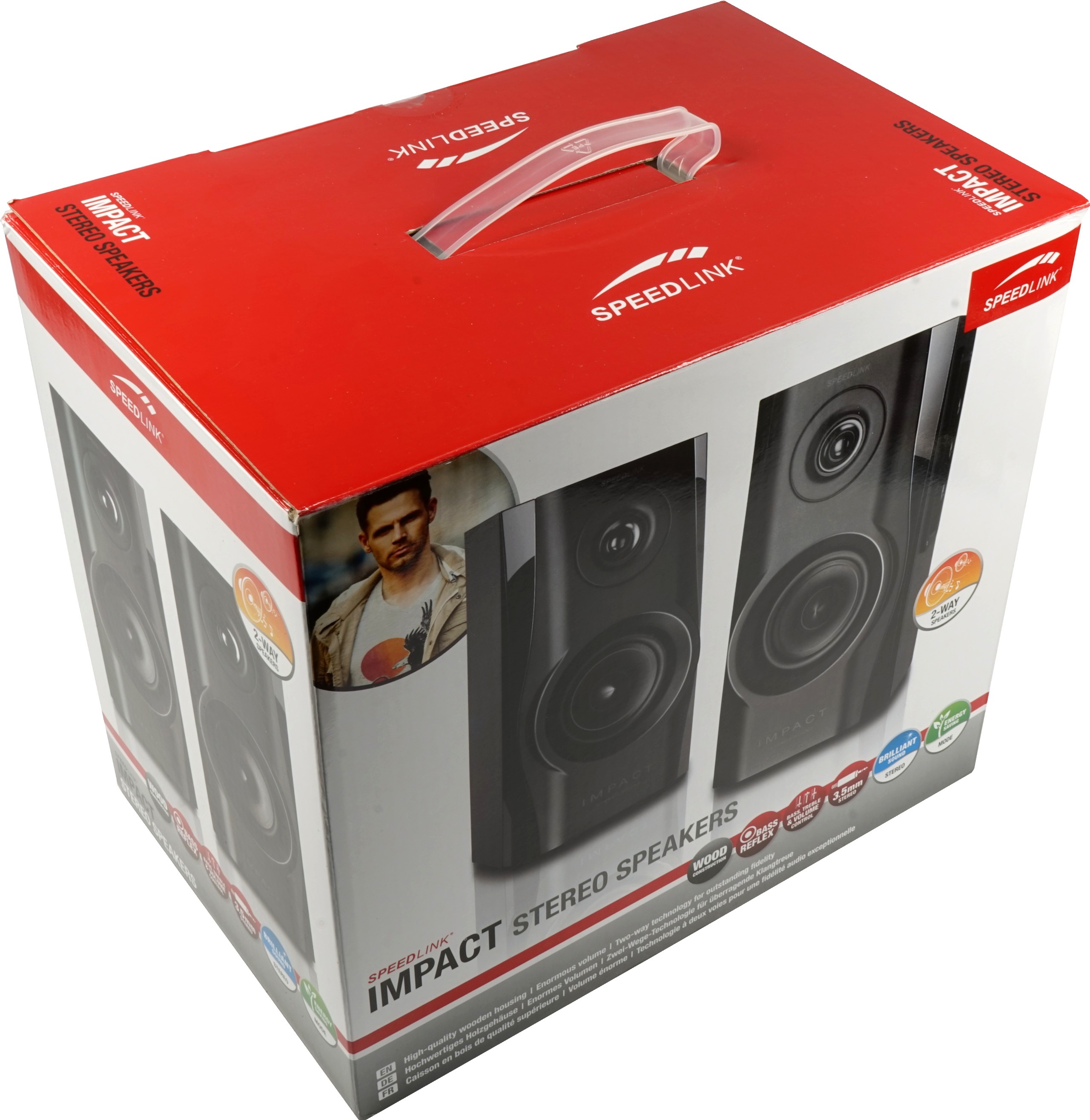 Finally, the most important technical data at a glance: