The brave clone sheep Dolly was yesterday, today come the NVMe Clone Warriors. In parallel with the launch of AMD’s new X570 platform, the first NVMe SSDs came on the market to support PCIe Generation 4.0. Well, the selection is still quite modest and it will be much more if you take a closer look at the competitor products. Some time ago I got my hand a Patriot Viper VP4100 and used it as a backup for my workstation test system. In addition, there is the Patriot Viper VPN100, which I deliberately do not use here, because it only supports PCIe 3.0. But also this SSD has an exact, unexpectedly found clone, but I will compare that at a different time.

But back to the VP4100. Since I am a rather curious person, I once removed the cooler with this SSD. In addition, I prefer to cool the SSDs with the cover of the motherboard. Thanks to hot glue tape, the whole thing can only be detached with a hot air blower, because the cooler sits bomb-proof for the time being. But no matter, with some skills you get the glue show then still replaced.

Well, and when I looked at the board and its components, there was a nice déja vu! I once ripped out the pictures of my Corsair Force MP600 and quickly realized that I was right here. Except for the color of the board and some detail differences in the printing, both SSDs are at least visually completely identical! Even the version of the board layout is the same. And while the Patriot board still shows the original tech-vest (Taiwan) manufacturer code, the other board on Corsair is directly labeled.

The Viper VP4100 is a thoroughly high-quality SSD, just like the counterpart of Corsair. Both drives shine with high sequential performance and differ at least in some details in firmware and interpretation of speed. Thanks to the Phison E16 PCIe 4.0 x4 NVMe controller and four 256 MB modules on BiCS4 TLC from Kioxia (formerly Toshiba Memory) with 96 layers, both have been equipped with the same genes.  Above Patriot and below Corsair:

In addition, two 4 GB DDR4 modules H5AN4G4NBJR from SK Hynix are added to both boards. The drives also have a long lifespan of 1,800 TB. unlike Corsair’s Force MP600, the VP4100 does not support hardware-accelerated AES 256-bit encryption, but has standard support for S.M.A.R.T. data reports, trim support, and the NVM format command to safely delete the drive.

If you ask a little in OEM circles, then both boards are based on the same base design kit, which also applies to the hull of the firmware. Here, both manufacturers have different focal points, with the theoretical readings of the Viper VP4100 indicated a tick higher. That is exactly what I want to question. Here is the data sheet for the Patriot VP4100:

To check the theoretical information from the specs, I use the usual suspects such as crystalDiskMark and Atto. However, I don’t make it easy even for these programs, because both SSDs are occupied with the same image, which approx. 66% of the storage space and they have a roughly equal read and read usage. It is therefore not a load-new SSD, but everyday goods that have already been neatly snorted down. Let’s see what remains of the theory in everyday life after the wear and tear of the theory. The SSDs to be tested are located in the second NVMe slot of the motherboard and are not used as a system disk.

I also use AJA as an everyday test to simulate the encoding of larger Ultra HD video streams and the speCwpc’s storage test, which includes a lot of real applications, and you can look forward to seeing what’s left of the performance of the big workloads. However, I picked out here the applications with the biggest differences and loads. The whole thing runs on my current small workstation with the Ryzen 9 3950X and the MSI MEG X570 Godlike with 32 GB DDR4 3600.

The installed 32 GB memory is currently sufficient, maybe I will re-energise later. DDR4 3200 is currently installed by G-Skill, which runs in the XMP profile. All the fun is supplied by a Seasonic Prime Titanium and 1000 Watts maximum power, which is still quite sufficient for mGPU. Cooling is done by a modified Alphacool ice grinder with an advanced quick release system. On the CPU sits an Alphacool XPX, a graphics card could still be stuck in between. 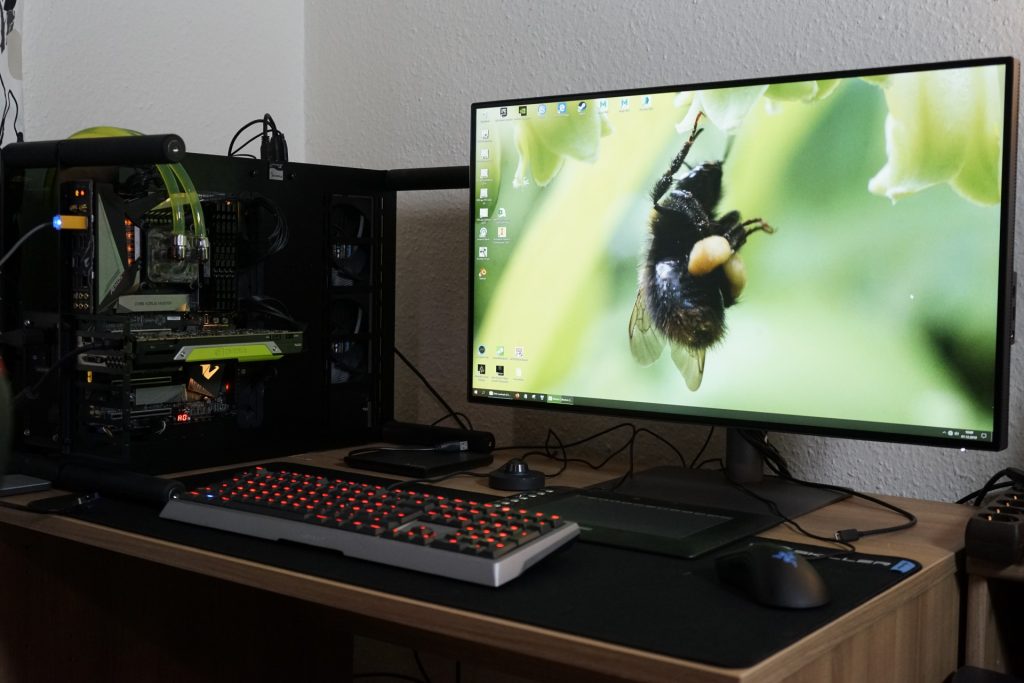 I have also summarized the individual components of the test system in tabular terms:

From the schematic to the finished PCB layout – generally explained
Volume flow, pressure loss and cooling performance using the example of a CPU and GPU water block | Practical knowledge