If you are not yet so familiar with the subject matter, I strongly recommend to you to get started and better understand my basic article "Basics GPUs: Power Consumption, Power Supply Conflicts & Other Myths" (opens in a new tab/window), which provides the most important information for the following. In the entry article for Turing "Nvidia GeForce RTX 2080 Ti and RTX 2080 presented – what is really hidden behind Turing " I already briefly referred to the power supply. So now there is the exact explanation.

Let's start by looking at the essential spower supply of such a GeForce RTX 2080 Ti FE, because in many launch articles we can simply read a lot of wrong or at least badly superficial. The first point is that not everything that is a voltage converter (circle) automatically represents a separate phase (and vice versa). As a rule, this is the case with simpler circuits, but you can also double a phase with a suitable chip (doubler), or switch something together and realize both very easily with the help of a suitable chip.

How this works in detail, however, would already go too far, so I just try to keep myself as general as possible. The fact is that you can then, for example, 6 phases divided into 12 individual voltage transformer circuits, which of course also help to divide the flowing currents. This distorts the thermal hotspots enormously. The disadvantage is that almost all of these so-called doubler chips prevent direct communication between the PWM controller, which controls everything as a supervisor and generates the phases, and the respective control circuits. Prevent. But it's also simpler.

The second, much simpler option is simply to control two control loops with one phase in parallel and to regulate them together. This is then symmetrical and brings the same effect. However, it also has the disadvantage that you then have less real phases or double phases and must ensure that the quality of outgoing currents remains as high as possible (e.g. Noise). And no matter what the trade press might write or announce via video, there are and remain eight phases for the GeForce RTX 2080 Ti!

Incidentally, it is really important for the quality of the supply, whether it is 6, 7 or 8 phases for the VDCC (e.g. Noise), but above 8 phases and more it will be completely uninteresting! From this point of view, a supply of real 10 (or more) phases from an electrical point of view no longer offers any advantages, but there are only fewer hotspots, because the flowing currents can be better divided. The rest is an urban legend and almost always just pure PR.

By the way, this is how Nvidia sees this card compared to conventional designs with n-phase. It's just a PR slide, but of course we want to see if there's anything (or maybe not):

One reason for the misguided is the fact that Nvidia has simply installed different PWM controller chips. Some colleagues got a card with an MP2888 from MPS (Monolithic Power Systems), which is actually considered to be the first programmable and real 10-phase controller and was already used on the Titan V. As chance would have it, there is now an uP9512P from UPI on my board that can only deliver 8 phases.

The MP2888 is a tick more expensive and also has slightly better specs, but in the area where the graphics cards work, these theoretical limits are uninteresting anyway. Whether Nvidia the MP2888 just got too expensive or the chip was just tight – you don't know and I don't want to speculate wildly. The fact is, however, that the uP9512P now also has to judge. And that's exactly what only the 8 phases from his data sheet can do. Point.

How many phases are there for the VDDC?

NVIDIA dispenses with phase-doubling and addresses the 16 phases individually. According to NVIDIA, phase doubling has too many drawbacks and also makes the design less flexible (press quote)

Short question, short answer: they are EIGHT. I already wrote that it is no different from the controller chip, because the MP2888 also runs in 8-phase mode. By the way, the above-quoted statement of a colleague is indirectly correct, even if you have to read exactly between the lines, as well as filter out the subtleties and the 16 "phases" represent the number of power stages. And I also wrote in the launch article that Nvidia works with double phases.

However, I must accept the accusation that I have also been a bit sly in terms of language here. Because they are certainly double-occupied phases, but not a doubling. Finest nuance, but important! The legitimate question arose as to where the doubler chips would then be. Answer: you don't need any! I had just explained that the phases can also be operated with two parallel Smart Power Stages. The uP9512P photographed by me on our board can do this, but an uP9512R would need doubler chips!

Also the MP 2888 can only control the control circuits directly, but no doubler chips! So at the end we really have 3 real phases with one control circuit and 5 phases each with two parallel Smart Power Stages. The scheme of where which Power Stage is located and which have been connected together can be seen here: 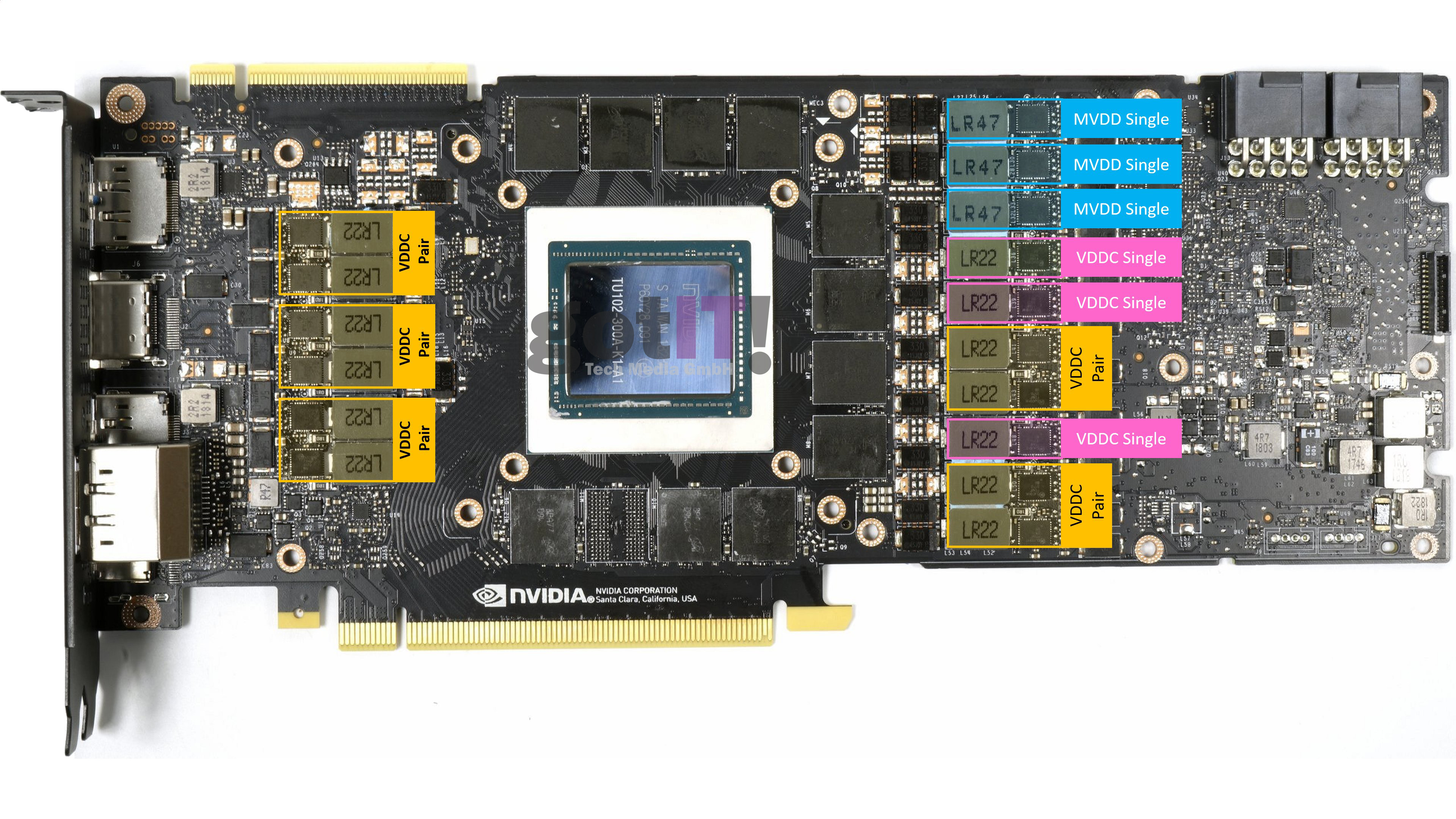 But what is really new now and why has Nvidia so persistently praised the power supply? I know it and would like to share this knowledge with you, because it also has something to do with why doublers would not have been necessarily conducive (see above). And on the next page!