The current scarcity of Intel's products in the 14nm process and the inability to realize its own 10nm process at all also strikes quite brutally on the Z390 motherboards in particular and the availability of the complete new product line in the So that the launch of the Platform Controller Hub (PCH) Z390 and the new Coffee Lake S Refresh processors can start rather than arrow-fast. Intel and the motherboard manufacturers had certainly imagined this differently, but the current situation is not really ideal for Intel, but almost humiliating.

This is now reason enough for the motherboard manufacturers to quickly market and continue to sell "older" motherboards with the Z370 chipset, which are also capable of running with the new Core-i-9xxx. Whereas in the past Intel's PCH was always produced in the larger structure width of the previous generation, the Z370 runs, for example, still in 22nm, there were rarely to never real bottlenecks of CPUs or chipsets.

Especially since you could always run the "retired" fabs for chipsets and gedöns quite elegantly, everything is now concentrated on only three fabs, which processors and chipsets have to produce in parallel. With the known result. Therefore, in addition to the H310 chipset in 14 nm, there is already an H310C with coarser mask, which again relies on 22 nm production.

While the intel hand-picked media were able to find out about the new processors in very manageable numbers and also to look forward to physically existing copies, I had to do some chin-ups in order to also get at least one model from the new Coffe-Lake-S-Refresh. The fact that this is "purely coincidentally" the top model that has been collated is only a small side story. Because if I'm to be honest, then the whole thing has a very unpleasant taste for me. 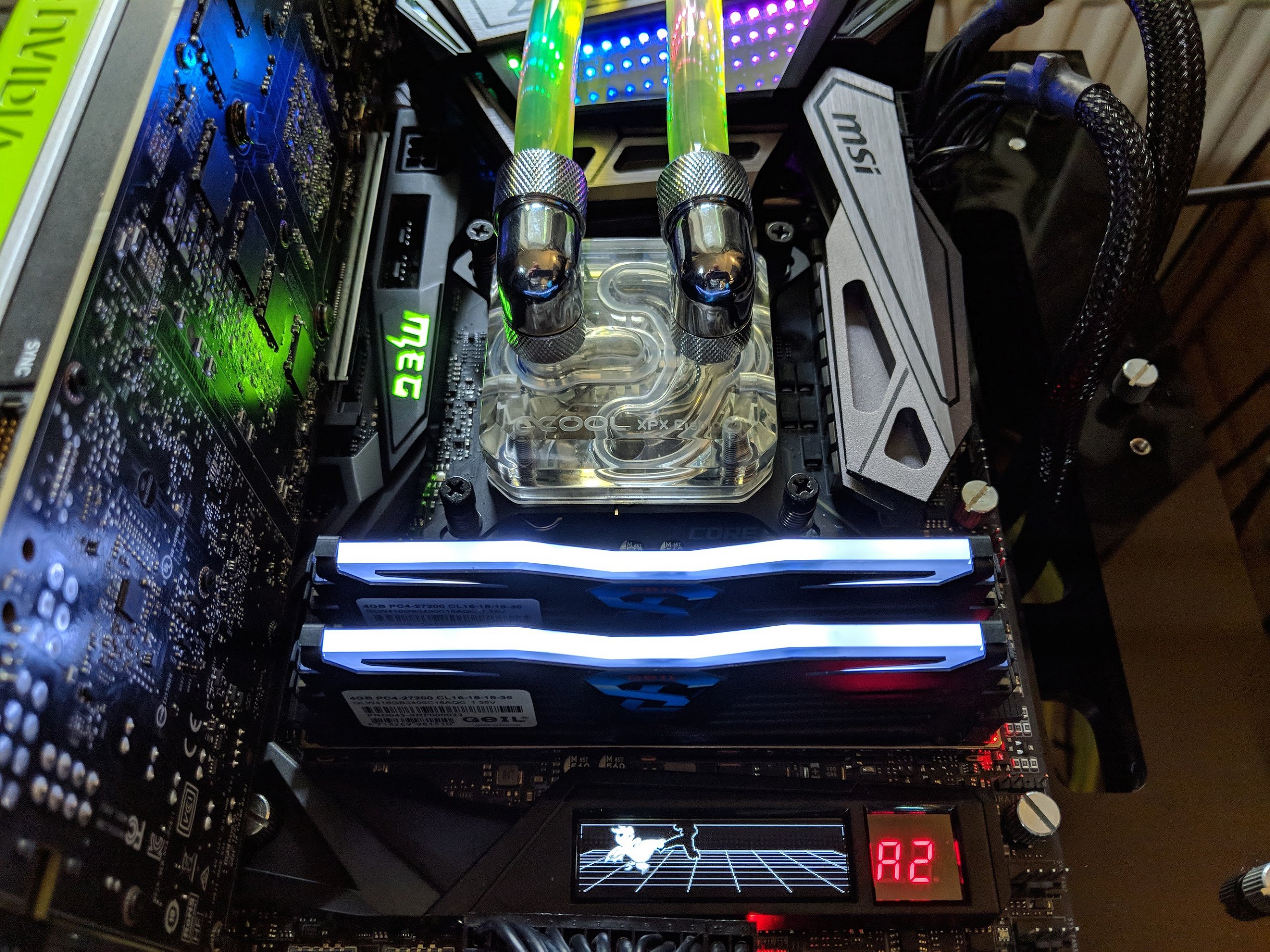 This soon following test I will do as usual together with my US colleague Paul Alcorn, also in the absence of further samples, but this right joy does not really come up, if one considers the overall situation for buyers and testers in general. For this, the motherboard used, which also does not come from Intel's sample pool, is a real (price) class in itself! The MSI MEG Z390 Godlike offers a lot of fun for money, especially visually and in detail.

I mean, if you can afford an 8-core with hyperthreading or SMT, you also have the necessary financial strength for an adequate motherboard. But this statement is no longer entirely true for AMD's eighth-seeded corers, who have long since arrived in the middle class. Another point that is sure to hurt Intel and whether the nonchalance that has been on display for years must somehow. Instant karma and so on.

Intel's new top-of-the-line model is likely to be a fine feasibility study of what could have been expected in the consumer sector, but nothing more. But we come back to the motherboard as a real existing object and the enclosed accessories, that whether the circumference can be spread out really nicely on the table and laid down: 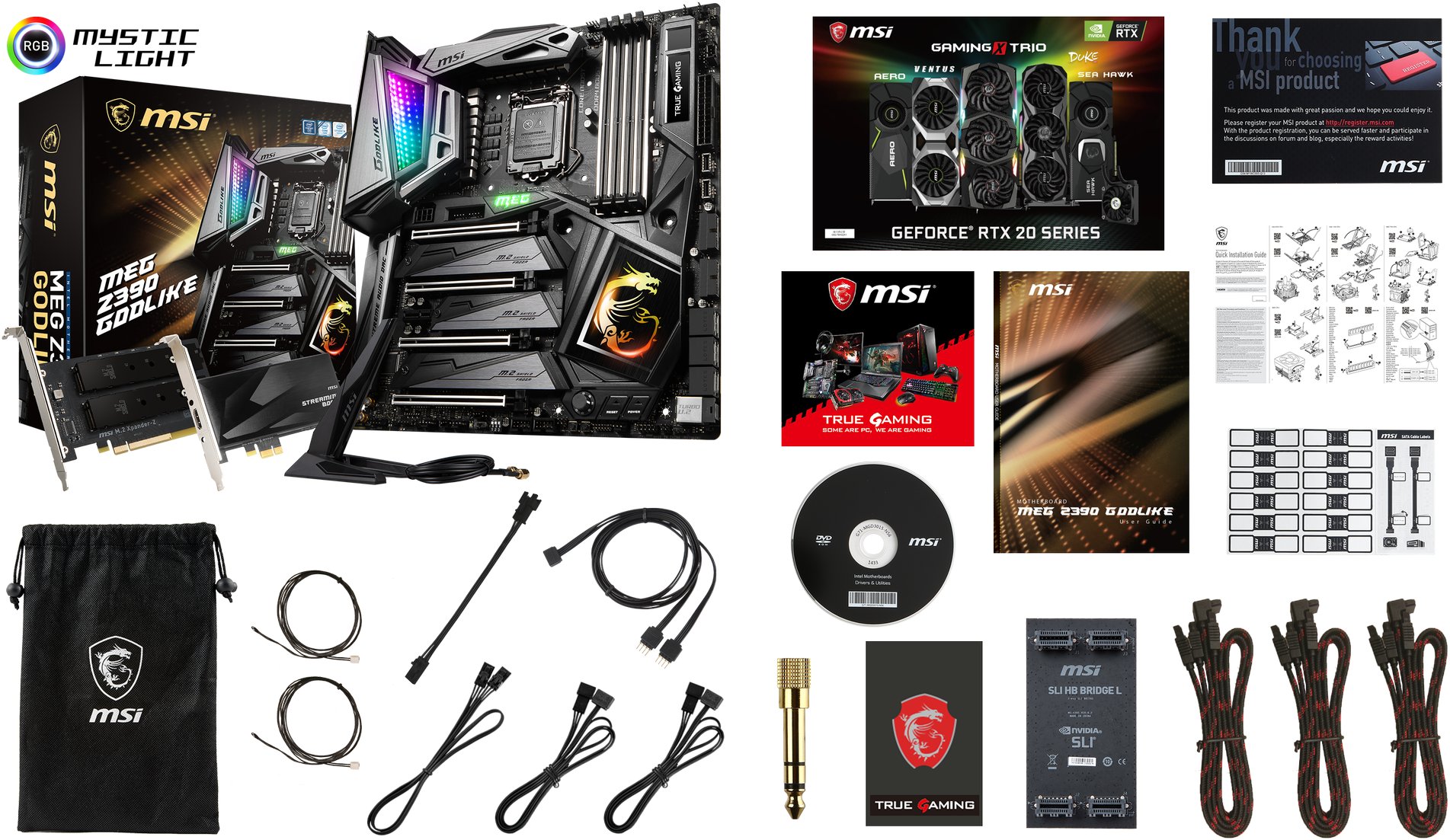 But what is really new about the Z390-PCH, that a change from the Z370 e.g. would be worth it at all? Stupidly, almost nothing for which you would have to kill yourself out of desperation, because the bottom line is that you only natively implement the USB 3.1 and AC-WLAN. For all the incentives, MSI, for example, has with the Godlike a Z390 top model at the start, which could also be more lavishly equipped.

As an audio freak, I also looked at (and listened to) the 6.3 mm jack output for the headphones, especially since MSI wants to implement a real amp and further optimize the audio branch in the board layout. After all, I managed to get a Beyerdynamic Amiron Home with its 250 ohms to almost full control.

It didn't work out, but this solution replaces every 100 Euro sound card with a gesture of nonchalance. The audible external voltage distance is also fine and the rest is the usual collection of connections for the inputs and outputs. Five USB-A sockets and a USB-C jack are supplemented by an emulated PS/2 port, which ends internally but only on the USB.

If you want to get more impressions of the motherboard – here is a picture gallery with real photos of the unboxing and water cooling conversion for the test system:

By the way, MSI presented the complete line-up in a video a few days ago, but avoided the term Z390 and Core i9-9900K as much as possible. Otherwise, it consistently leaves the impression of an organized flight forward. Considering the current situation around Intel's products only too understandable and actually reason enough to finally add something visually and feature-technically on the part of the manufacturers.