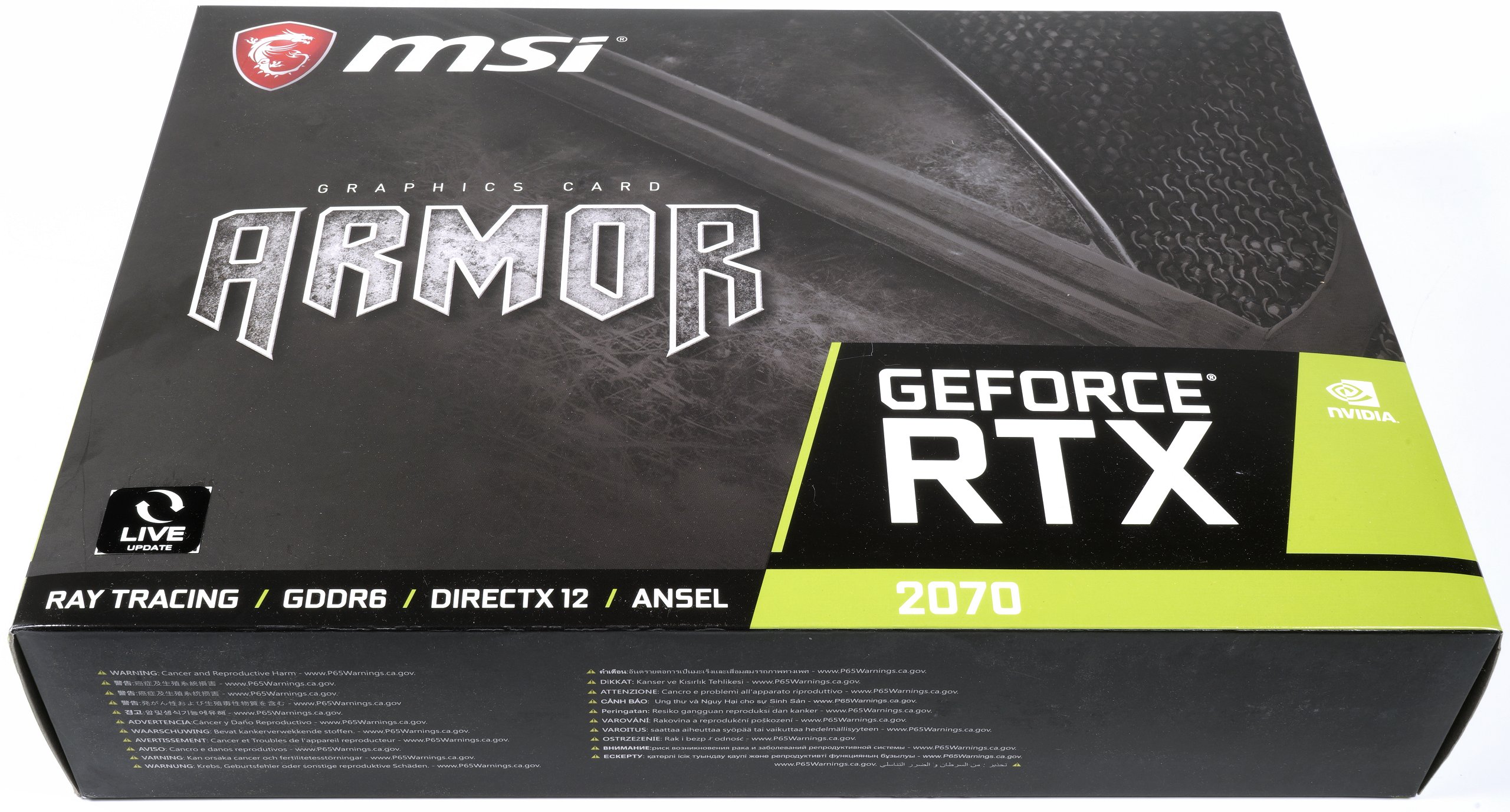 Interestingly, the GeForce RTX 2070 Founders Edition, which has already been tested today, is not the object on which the chip giant is focusing its new focus. In order to make the GeForce RTX 2070 quite tasty for the buyer, this time the board partners have to judge it with their not overclocked models. Nvidia's price target is an RRP of 519 euros, which must be adhered to everywhere. Interestingly, you get quite decent cards for that.

The MSI GeForce RTX 2070 Armor presented here is such a candidate, which is offered deliberately favorably (or/ but also possesses their qualities. Of course, the respective top models of the board partners offer a significantly higher bling factor and one or the other MHz more clock ex works, but those who can or want to do without the LED terror and put on their own hand to overclock the card could well find what they are looking for. . 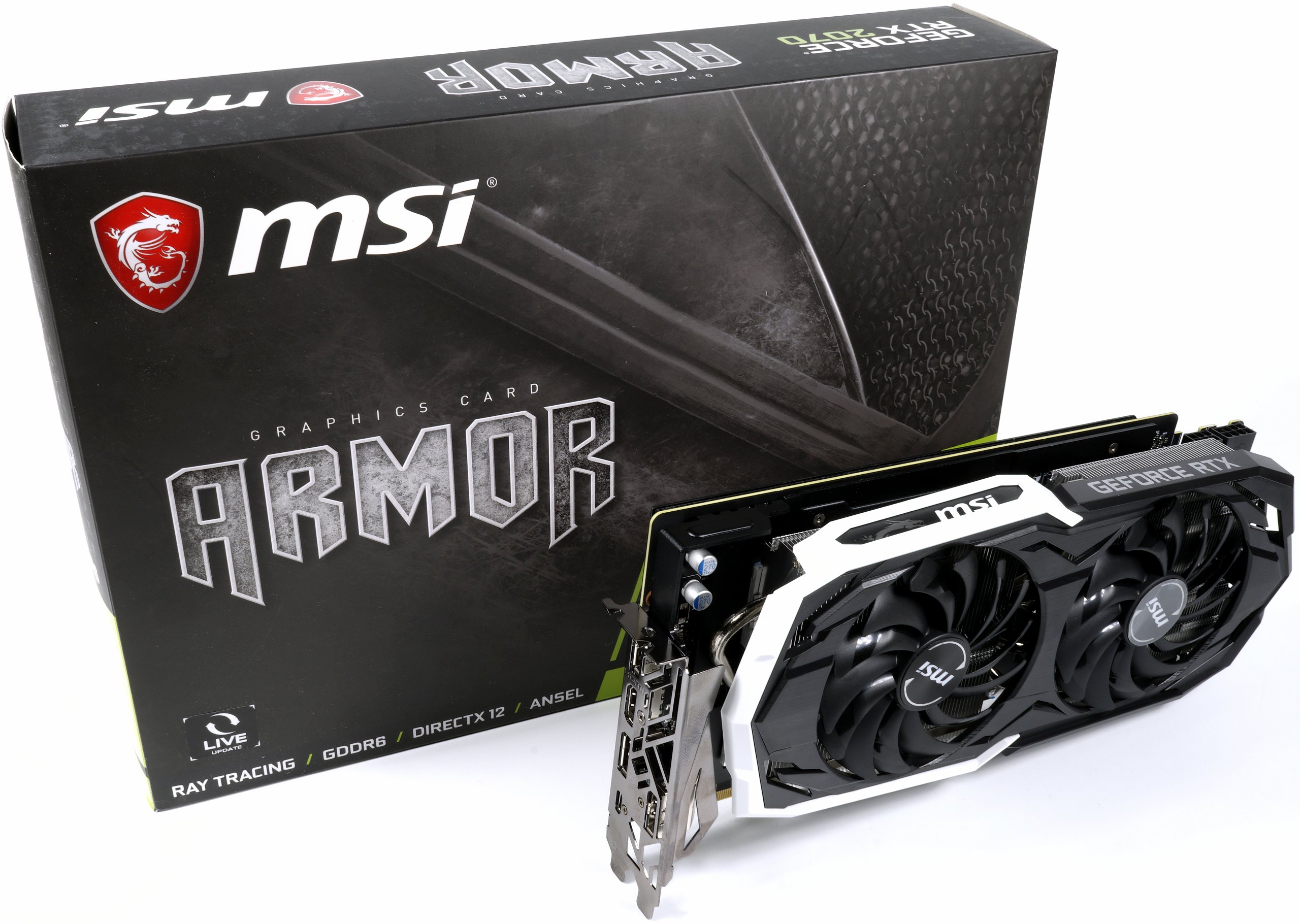 The MSI RTX 2070 Armor weighs 1170 grams, is 29.7 cm long (from the outer edge slot panel to the rear end of the fan cover), even 13.5 cm high (top board slot up to top fan cover and at least 4.3 cm thick, which makes it a 2.5-slot card. Then there is another 0.5 cm in depth for the backplate. The card is therefore quite powerful and relies on a quite potent cooler with two 9.5cm fans and 14 rotor blades each. A fan stop is of course also on board.

A total of five massive, nickel-plated 8mm heatpipes transport the waste heat from Heatsink to the slats. This seems just as oversized as the 8-pin and the 6-pin connector, which seems quite lavishly sized for a card that is not overclocked. But a decent reserve has never really hurt, hasn't it? In the first stress test, by the way, this card did not make a bad figure, as we will see in a row.

The card boosts ex works under full load (Witcher 3 WQHD) in warmed-up state up to 1650 MHz, whereby at this point already with a power consumption of approx. 167 Watt the ailing Power Target takes hold. The final temperature in the open structure is 61 to 62°C, in the closed housing approx. 64 to 65°C, whereby the card remains almost inaudible in any case.

With less than 34 dB(A), this card is an absolute quiet era, even with a long-lasting, full load. After all, we are talking here about the cheapest model of MSI. GPU-Z then also shows us the performance data of the map in the first overview: 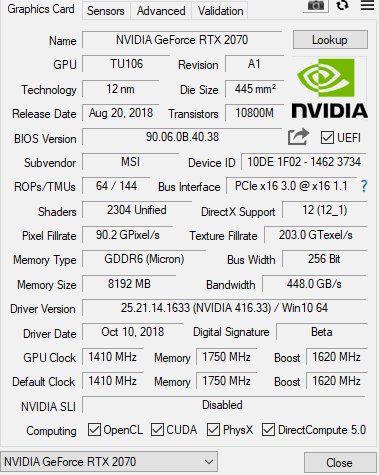 The gaming performance without factory OC is on average of the comparative measurements approx. 5% below the performance of the Founders Edition with a light factory OC. The overclocking of this card is a little tricky, because more than 114% of the Power Target is unfortunately not in it. With this I was able to keep 1875 MHz in a fully warmed-up state, resulting in a power increase of approx. 6 to 8%. In the end, this not only overtakes the VU in the FPS, but also remains significantly quieter.

The power consumption is now approx. 189 watts, i.e. wafer-thin above the values of the Founders Edition, whereby you can act much more economical and efficient in the factory state without overclocking. If you compare this with a GeForce GTX 1080, the new card as a board partner variant is even much more economical! With approx. 110% Power Target is just as fast with the Armor as with the Founders Edition, because better cooling allows for higher boost steps.

The detailed individual benchmarks of the GeForce RTX 2070 can be read again here for better orientation: Nvidia RTX 2070 Ti Founders Edition in test – Complicated equation with many unknowns. 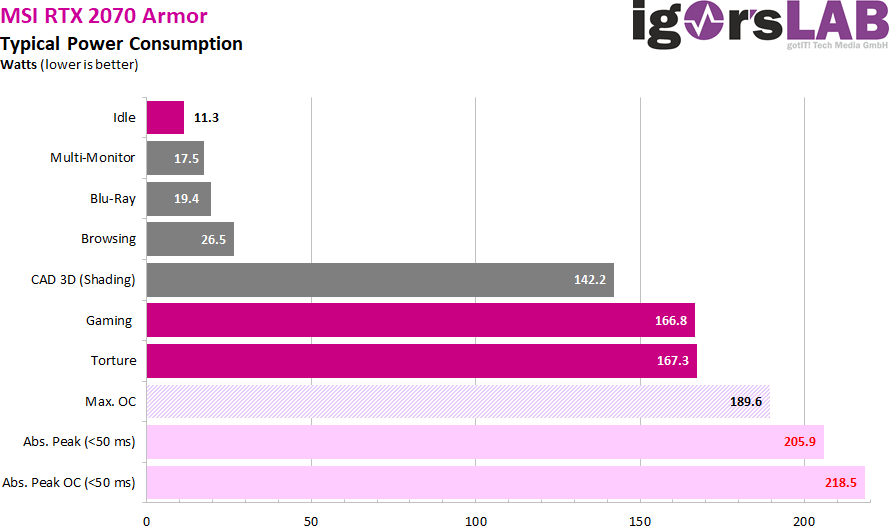 We can also see very nicely from the detailed curves that the spikes, i.e. the peak loads, with less than 210 watts also remain very manageable: 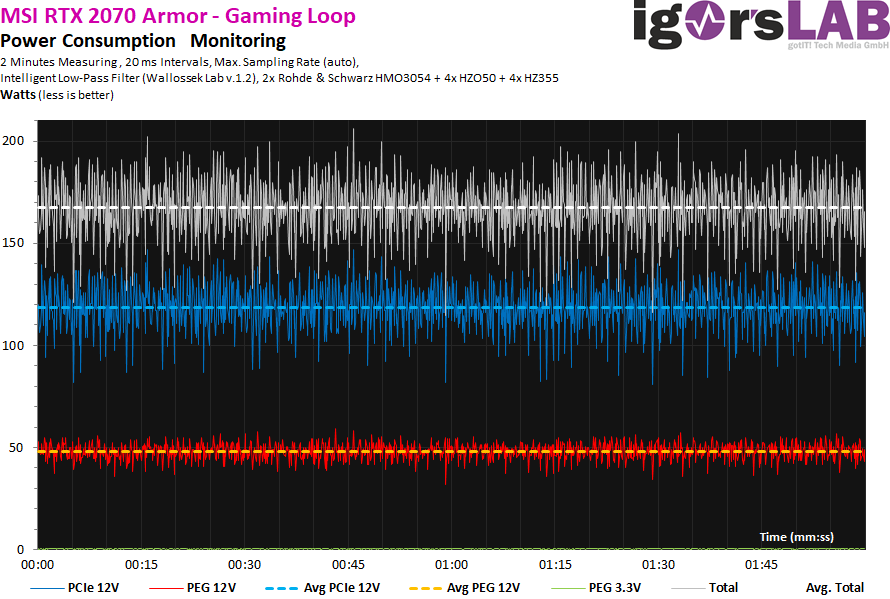 The following measured values of the tabular overview were determined in practice and supplemented with the other frame data:

Nvidia's short-term but very strong request to the board partners to also buy tickets at the level of the EIA of 519 euros incl. Vat. Cards like this MSI GeForce RTX 2070 Armor make it very interesting when it comes to covering performance margins just above a GeForce GTX 1080. Compared to the 639 Euro Founders Edition, this is almost a bargain here, because the card is more economical, quieter, cooler and at least as fast if necessary.

Buy? Why not, if it's supposed to be a good card for 1440p. Or you can wait for the bling bling models. And so all of us: this card has cooling reserves like a thick side-by-side refrigerator. I don't think this card would be even partially overwhelmed with the BIOS of an MSI RTX 2070 Gaming Z. But I didn't say anything, just thought out loud 😉

Flashing is no longer possible, Nvidia now really installs 2-class chips and on the Armor, unfortunately, the poor people chip is entangled: Flashing impossible! The 2-class company for the Turing chips of geForce RTX 2070, 2080 and 2080 Ti

Due to the very late sampling, which took place only the day before the launch, I have to submit the complete individual tests later. These short tests are the result of a longer night and day action up to the launch date, because on the one hand I found the Founders Edition available to my colleague rather unspectacular and on the other hand, from my point of view, this was not of any relevance for the market. Has.