With a portable hard drive and a fast memory stick, iStorage with diskAshur Pro2 and datAshur Pro offers something like smart data safes for the secret (data) carrier of the world. And that's what already looks like a safe with the fancy number keypad and promises security, it is. We'll test it...

With a portable hard drive and a fast memory stick, iStorage with diskAshur Pro2 and datAshur Pro offers something like smart data safes for the secret (data) carrier of the world. And that's what already looks like a safe with the fancy number keypad and promises security, it is. AN XTS-AES 256-bit hardware encryption locks the dropped bits and bytes in solitary confinement and the only existing cell key is an 8- to 15-digit pin.

It is also important that keyloggers have no chance, as the complete input is made on the respective device. While the stick can be unlocked even when not plugged in thanks to the built-in battery, the portable hard drive even masters its own user management with admin pin and user pins. Since I travel very often and also transport sensitive data in my luggage, e.g. the hard drive is not in the carry-on baggage. Because without the pin it is absolutely worthless for the qualified baggage thief. 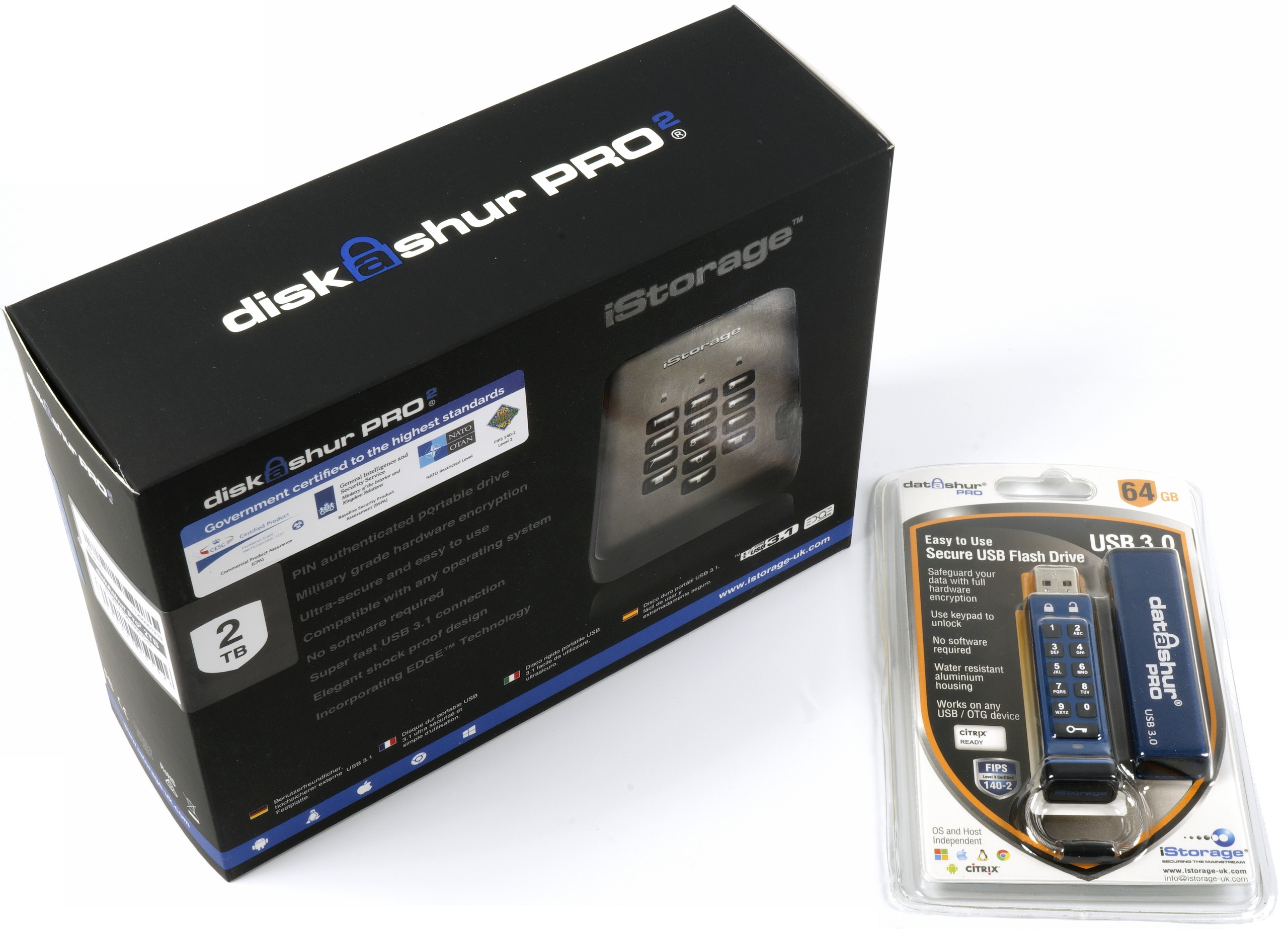 Whether and how much time this encryption story costs, I also measured and compared the results with those of a normal portable hard drive, as well as a common USB 3.0 stick. In addition, There is my personal conclusion to the handling, because that is also what matters. But let's start nicely in turn…

Let's start with the Fat Boy, the portable disk diskAShur Pro. By the way, I gave the high-level 2 gallantly to myself, because no one would enter it anyway and the whole thing is also completely SEO-unsuitable. In the meantime, even KFA2 has understood this. The two only stands for the latest version, which differs only externally from the "older" version, because the parameters remain the same. So what can you expect from such a data safe? 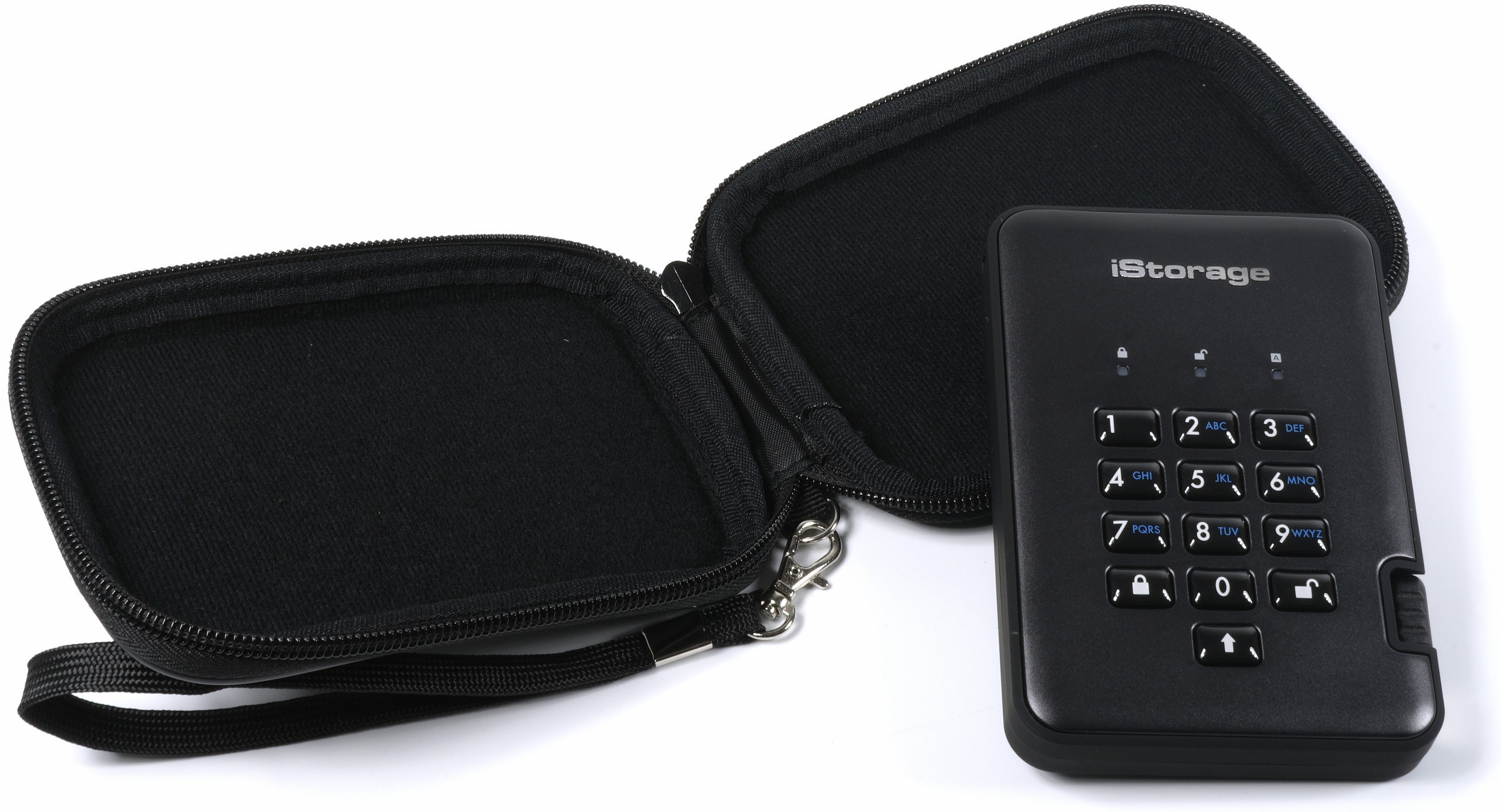 Let's just start with the exterior. You get a fairly user-friendly keypad, which is insensitive to dust and dirt and also wear-resistant. This makes it impossible for potential hackers, e.g. solely by the traces of wear and tear of the buttons, find out your PIN. The housing is also water-protected and quite solid. At least fragile is different. The integrated, very short USB cable is theoretically enough to connect to a PC, but I would always use an extension.

What counts among the inner values, however, is much more important. Thus, the drive does not require any software to install to set up or operate. This also guarantees that diskAshur Pro works with all major operating systems that support PnP and USB. Administrator mode allows you to create up to five individual user accounts, which also indicates a business deployment.

The manufacturer emphasizes that diskAshur Pro has been certified as FIPS 140-2 Level 2 in the validation test and thus also complies with the standards required by the US federal government for the protection of sensitive data. The cryptographic security system of the diskAshur Pro drive includes e.g. physical security, as well as cryptographic key management and design integrity.

The disk locks automatically as soon as it is disconnected from the computer or when it goes into hibernation. In addition, you could even set a time after which the device automatically locks itself in case of inactivity. In addition, you could activate a "Brute Force" self-destruction mechanism, which permanently deletes all data on the drive if an incorrect PIN has been entered several times in a row. Quasi Mission Impossible for any hobby spy.

Insights and outlooks: How we currently finance ourselves and imagine the future of our site(s)
CeBIT in the photo mixer: The slightly different re-reading with a little wistfulness