In the last few days it was already rushing in the leaf forest, and so much information or many rumours have already been chewed extensively before, again and back. Apart from the fact that I can also confirm one of them, there are of course other things from the technical field that should be quite interesting, because you could not read them in the broad est. I've prepared something...

In the last few days it was already rushing in the leaf forest, and so much information or many rumours have already been chewed back and back extensively. Apart from the fact that I can also confirm that the manufacturers already received the media kits for marketing a long time ago, there are of course other things from the technical field, which should be quite interesting, because they are still so could not read in the broad mass.

An announcement of CES in January 2019 as part of Jen-Hsun "Jensen" Huang's usual keynote would certainly be possible, but perhaps Nvidia is also looking for its own event for the CES for market entry. So announcement and real launch on two separate dates, which is probably even more likely than a complete presentation at CES including launch. But this article is not about that, but rather about the card itself.

However, it is confirmed that all board partners are already working on the cards and that mass production is imminent. Nvidia's Green Light Program also takes a lot of time when the AIC has to validate every little crumb. But I'll come back to production details right away.

First, I put together a table in which all the rumours (e.g. videocardz) to the technical data. What I think is certain (although you can never be 100% sure at Nvidia), I've also highlighted in bold (although for some reasons it could still change slightly). I also added a few things myself. If one were to follow Heise's NDA interpretation, I would probably end up cruelly at Jensen's torture post tomorrow.

I risk it anyway, because it doesn't even look bad for an RTX 2060. On the contrary, because the smaller Turing is, the more interesting the whole thing becomes for the end customer, if the customer has to or wants to look at the money:

In terms of performance, this is quite good for Nvidia, as at least 83% of the cores are still on board. If one speculates that the boost is significantly higher (than what you specify) because with lower TBP and thus also less waste heat the temperatures are likely to be significantly lower than those of the GeForce RTX 2070 (FE), then there are already about 88% of the power of a GeForce RTX 2070. The following marketing slide (allegedly by Nvidia himself, I only dyed the bar red afterwards) shows this with the 3D Mark Time Spy: 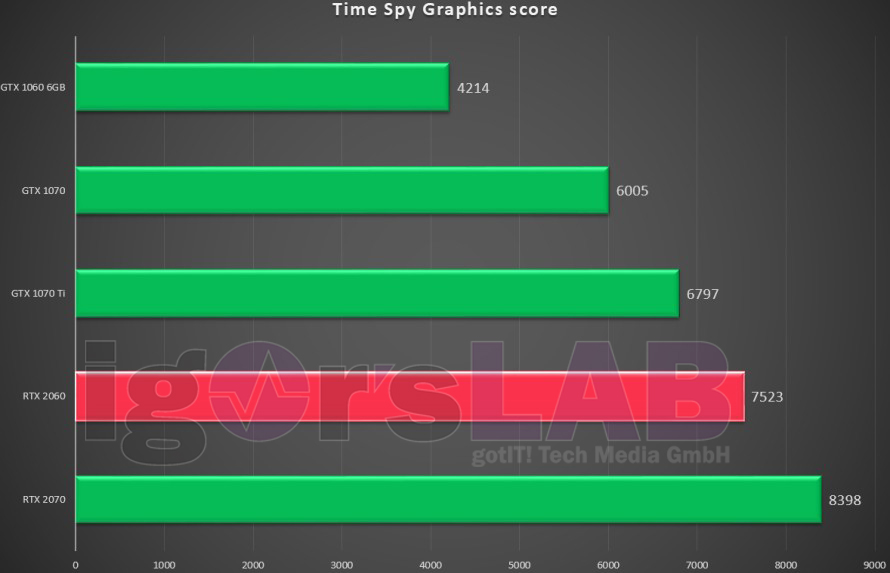 Of course I don't know the system, but Nvidia will certainly not have tested with an old Q6600. Of course, I may not write about the exact internal results of the board partners (the NDA really applies here), but the current beta driver knows, according to Nvidia's recommendation, only things like e.g. 3DMark11, Time Spy, Unigine Heaven, Furmark and NVPunish (hehe!) as referenced applications for benchmarks. And they should perform in a similar way as they did. The rest is flaccid protein foam in my lab kitchen.

Board layout for launch and later

Since it is hectic as usual, the (few) models are expected at the start, which rely on an already known and existing board layout. Since the chips are similar, you can rely on Nvidia's PG160, a short 10-layer board as we already know from the GeForce RTX 2070. This board was already used in the GeForce RTX 2070 Founders Edition, but with the rear-mounted power supply connection.

EVGA later changed this board, e.g. on the GeForce RTX 2070 Black, but this time with neatly mounted 8-pin jack. Exactly this board should probably be used for most cards for the presentation at the CES and for the launch afterwards. (symbol image of Techpowerup):. 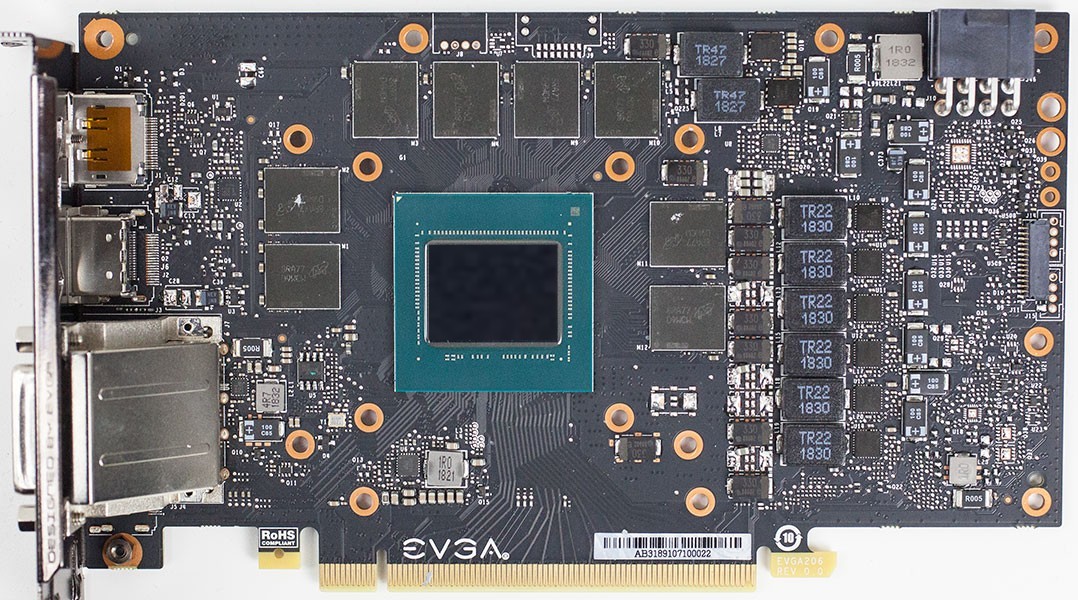 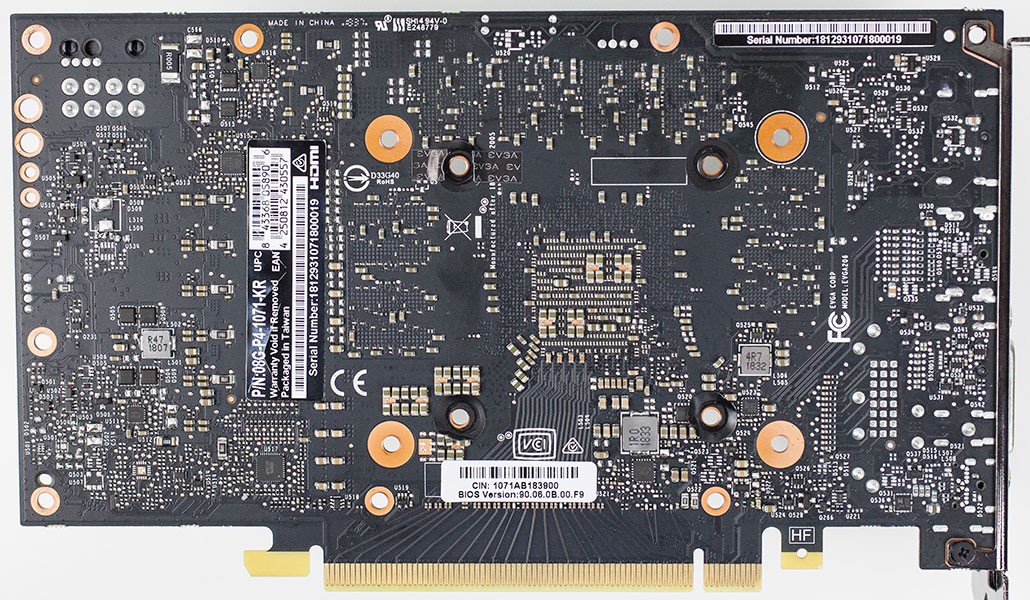 But this card can also be produced much more cheaply if you can rely on the new GP161 layout as a board partner, for which a 6-layer board is used. Here, one calculates with February 2019 for the start of mass production. However, it is unlikely that a particular model with two different boards will be offered. Whether 10 or 6-layer design, all manufacturers' own designs must be based on Nvidia's "Base Design Kit", which is binding on the AIC.

Final is not that number, but manufacturers are currently rumouring that the price recommendation is 349 USD for the cheapest tickets to the launch. This sounds good, almost too good, even in view of the presentation slides that have been collated. If you have made the step to the simpler and cheaper boards, you might expect a little cheaper models from February/March 2019, where you could well be a little below this price.

But that would make it quite tight for AMD's cards, because even if the colported performance is a little more restrained than on the slide (which one should assume better), it would still be approx. 50% more than a GeForce GTX 1060 and slightly more than a GTX 1070 Ti. But where should Vega and Polaris be priced? But that is precisely where it is already becoming very speculative. However, I assume that all the data and prices are roughly correct.

For the Radeon RX 590 it wouldn't even look extremely bad, because it is and will surely still have enough air down. The chip has paid off and could once again celebrate a new bloom in the entry-level segment with a 7nm-Shrink. Large margins did not remain, but it was still to fit. Vega is no longer really suitable for a price war of less than 400 euros and is also far too expensive to manufacture. If you don't manage to shrink the chip and give up HBM2, then it will be difficult to impossible in general.

And among them? It is rumoured that Nvidia would virtually re-brand the GTX 1060 and later shoot it in the entry-level area, especially since the far overly optimistic forecast is likely to have accumulated due to the mining bubble. But what is a bit irritating would be the big hole between a possible GTX (?) 2050 (with the old Pascal chip of the GTX 1060) and the GeForce RTX 2060. Do we still see Salvage models of the RTX 2060 as 2050 Ti? As I said, all this is still a little too speculative for me. Let's see.

And if no one grills me, I will of course update this article.

Helpers in all USB situations: with the UM25C you have everything in view | User review
AMD Radeon Pro WX 8200 review – Benchmarks and exclusive hardware details