With the current Wattman from AMD’s driver, a lot of things (albeit with some errors in the GUI) work as intended and had.  You can even expand it, even if AMD’s editor for the voltage/frequency curve as a “fused curve” seems a bit mysterious. This is exactly where the RTG comes in, and the very special thanks go to datspike for finding and hellm for implementing the program. Now, of course, I don’t want to torment anyone with bleak mathematics, even if the temptation (I admit) was quite great.

Or could you immediately begin with the connection between the coefficients of a square function in the general form and the associated parable? Even if AMD has a few limitations built in, so that you would also fail with the actual formula (see Wattman graphic below). But I will come to that in a matter of time, because we want to get it to be user-safe. That’s why I forgo all formula games at this position and I prefer to show by the settings what has an influence at all and where AMD takes the reins of mathematics. 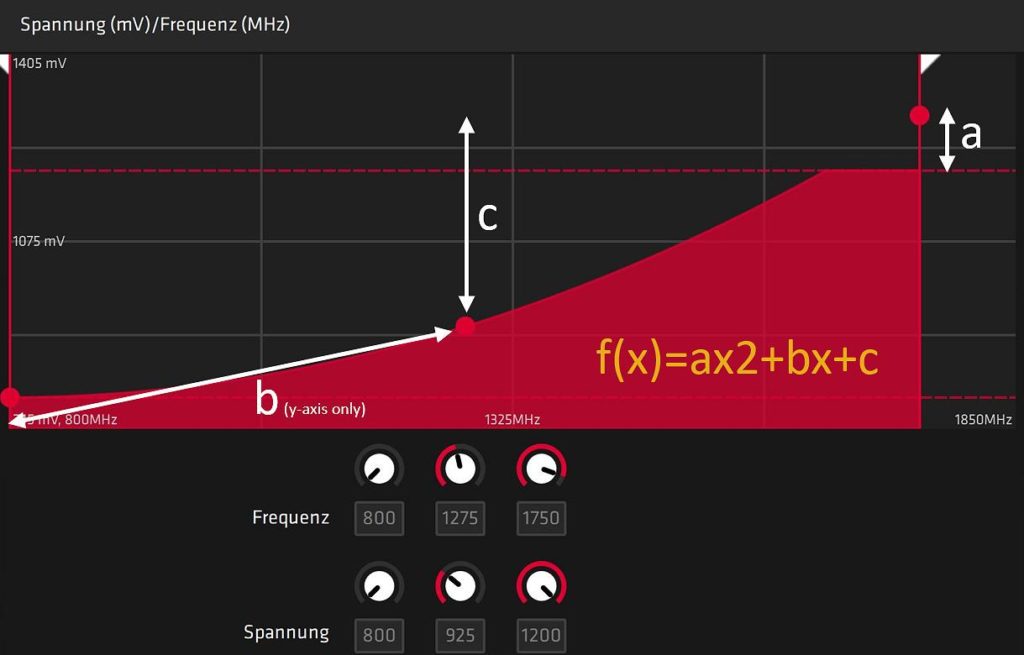 The (secured) voltage frequency curve in the Wattman

Let’s start by taking stock in the original setup. A rather unsuspecting MSI RX 5700 is used (as in the rest of this article). If you open the Wattman (20.4.2, April 2020), you will already see a supposed error. The parabola is shown “wrong” here after opening, because the limit to 800 mV minimum voltage leaves both the vertex b and the offset c below the boundary. This is not only pointless, but is also not manually reproducible. 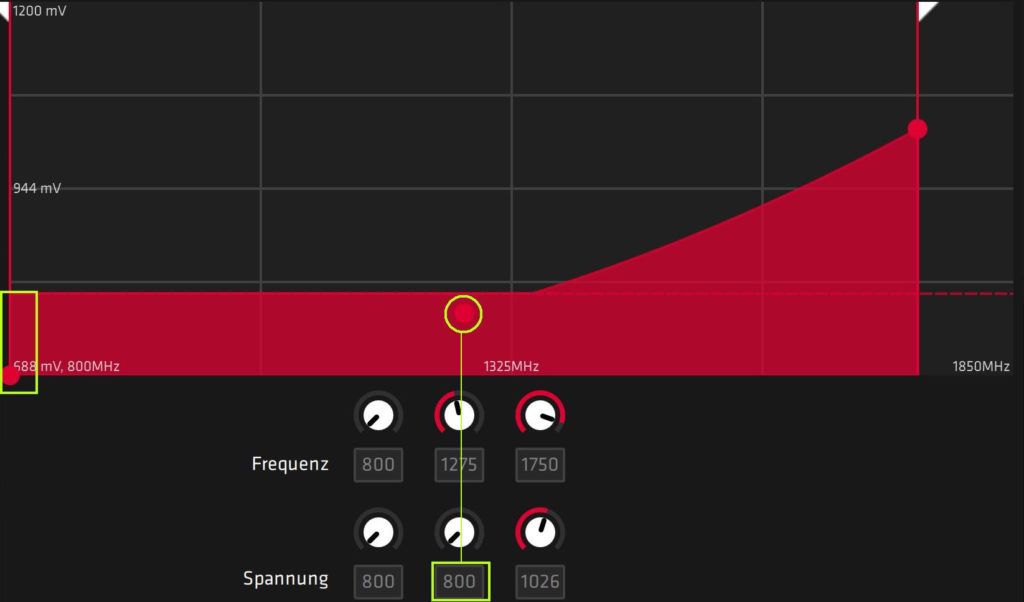 If you now manually move the vertex briefly with the mouse (b), then the curve corrects itself again, but in the end result you will be significantly higher with the voltages in the frequency course (and at the vertex)! The entry is now at the (also measurable) 800 mV at the lowest frequency and the parabola works again as such. I tried to log the actual voltages and i rather see it as the fact that the original graph was misrepresented in the Wattman, because 800 mV at 1275 MHz were never measurable and you were always above it. That’s why I stick to this graphic, which then correctly maps the minimum result with (once) moving slider: 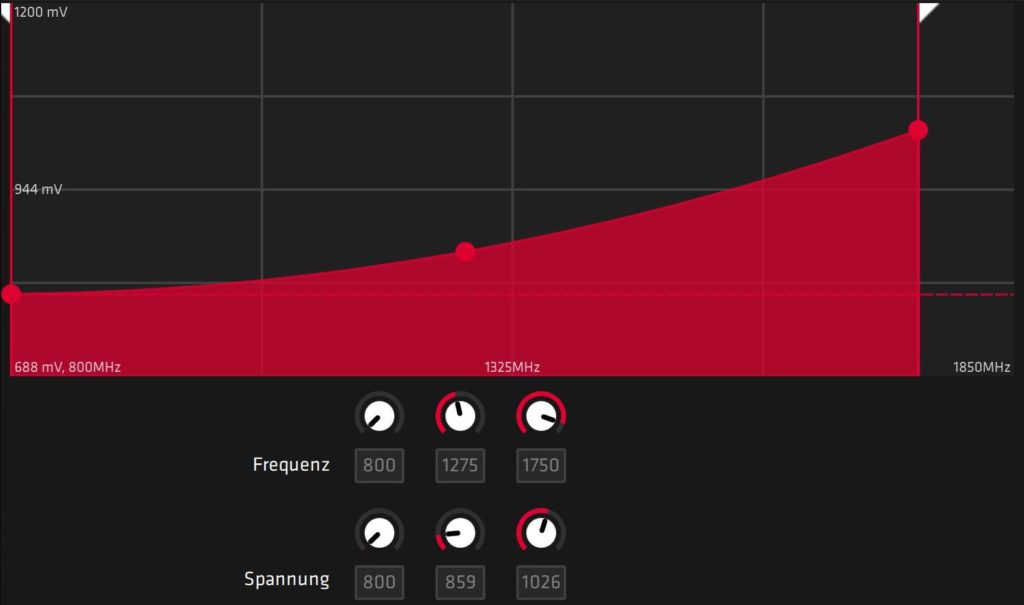 However, we have now realized that although the values of the parable can be modified, AMD has incorporated various restrictions in the driver. For example, the vertex is not moved on the X axis, but as a “middle position” always results automatically fixed from the difference between maximum and minimum frequency. Therefore, you can only move the vertex up and down and adjust the ascents within the minimum and maximum values stored. In the maximum case, this looks like this: 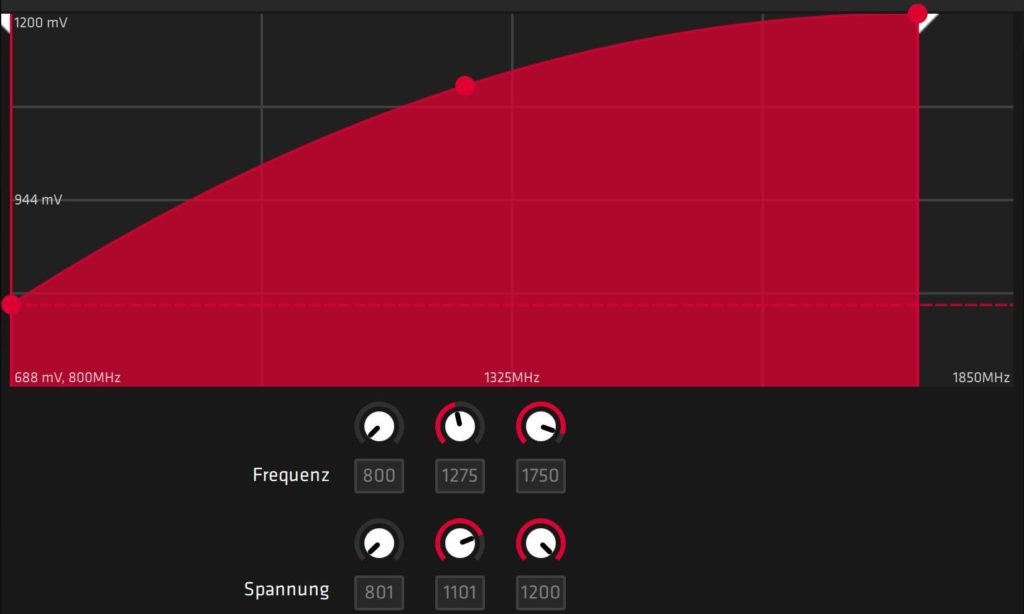 All of this is very annoying in the limitation to a fixed value on the X axis, but not to change, even if the Curve Editor of Nvidia actually suggests how such a thing can be implemented more sensibly. In addition, we also have (as with Nvidia) the limitation at the minimum and maximum voltage, which I will mention in a while. But it is the case that all these other factors make a simple replica of AMD’s Curve Editor completely impossible and we have to manually annoy ourselves with pure numerical values, because not all the details are known.

If we now load the BIOS of the VGA card into the MorePowerTool (MPT), then the values for the curve of our card (this may vary) look like this: 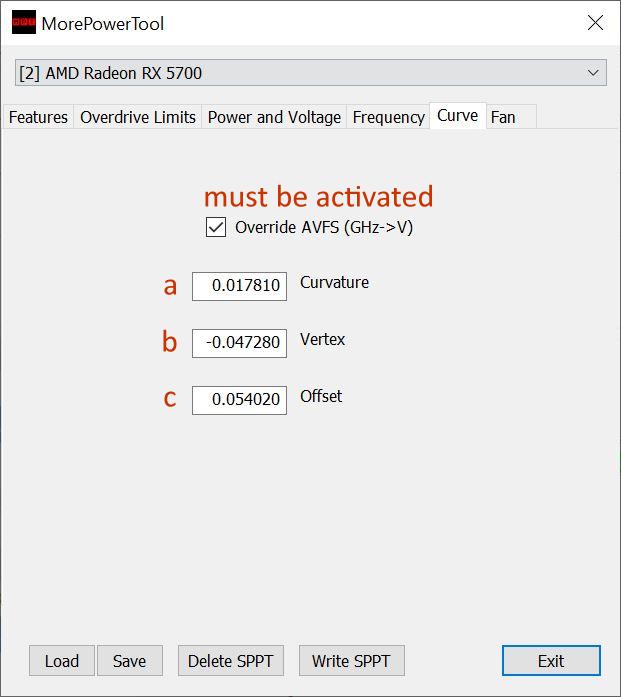