Whether Jen-Hsun "Jensen" Huang (CEO Nvidia) is really related to Lisa Su (CEO AMD) and is something of a kind of (big) uncle, as often and gladly collated, but is always disputed by her ("It's not true"), or not - Vega VII provides a lot after yesterday's launch Vortex. Visual, mental and verbal. Whether it's the media, the visitors to the forums or the companies themselves.

Whether Jen-Hsun "Jensen" Huang (CEO Nvidia) is really related to Lisa Su (CEO AMD) and is something of a kind of (big) uncle, as often and gladly collated, but is always disputed by her ("It's not true"), or not – Vega VII provides a lot after yesterday's launch Vortex. Visual, mental and verbal. Whether it's the media, the visitors to the forums or the companies themselves.

Attention can always be good, especially amD, and if it's from the supposed uncle. If you believe the representation of PCWorld, then the Nvidia boss has had a powerful cross-cut in the announcement. Was it the fact that Lisa Su also appeared (purely by chance?) in a leather jacket (for the first time) and that it was also short-sleeved enough that the stage did not have to be shocked, as is usually the case with the supposed uncle? Or could Vega VII somehow score? 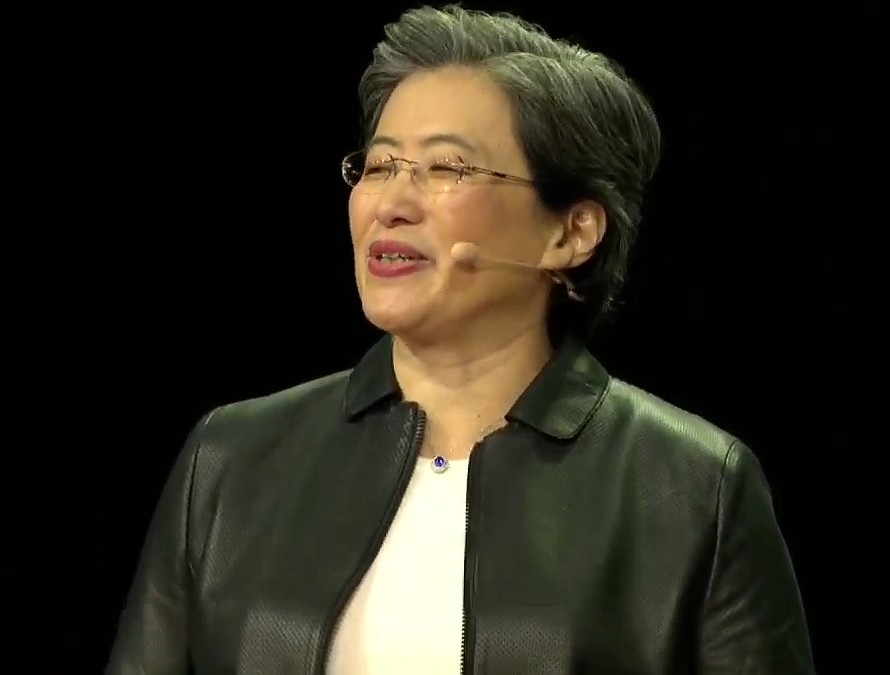 But let us have the protagonists have their say next. One aggressively acidified, the other shorter tied than usual.

"It's underwhelming," Huang summed up rather disparagingly, according to PCWorld, when asked what he thought of AMD's new Radeon VII, which has 16GB of HBM2 memory, 1TB of bandwidth, 60 graphics cores and is based on a new 7nm process.

"The performance is lousy and there is nothing new," Huang continued. " There is no ray tracing, no AI. It's 7nm with HBM memory and something that barely keeps pace with a 2080. And if we turn on DLSS, we will destroy them (the card)."

Huang also expressed unusual comments about the impending opening of G-Sync. "The (FreeSync) has never worked. As you know, we invented the field of adaptive synchronization. The truth is that most FreeSync monitors don't work. They don't even work with AMD's graphics cards." 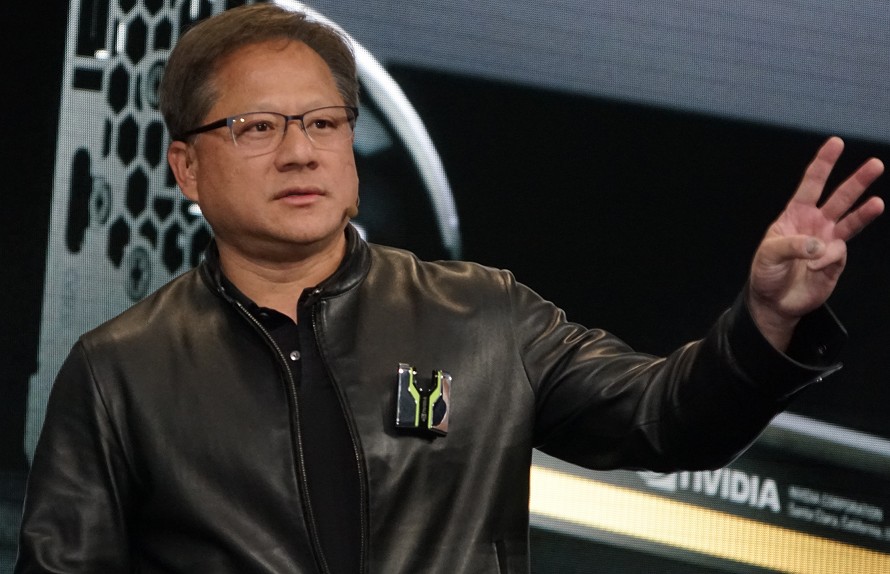 Well, Nvidia has data and measurement results from its own laboratory, which are supposed to indicate that from Nvidia's point of view there are quite real problems. According to Huang, they tested 400 FreeSync panels and ended up finding only as many as 12 that were compatible enough to turn on G-Sync automatically. For the others, the user has to do it manually. Always at risk that possible and unexpected errors might occur.

In yesterday's article "Everything about compatibility between G-Sync and Adaptive Sync, VRR and FreeSync" I went into more detail about this opening and the possible problems. However, the very distowardsus attitude should also be critically questioned. Driver or gearbox? Time will have to show it. Or the monitors.

As an almost small side anecdote, Huang answered the question of what he thought of Intel's new push into the graphics card world that Intel's team would actually belong to someone else.  "Intel's graphics team is basically AMD, isn't it?" asked Huang, snippets. "I'm trying to understand AMD's graphics team."

Well, somebody might understand somebody and something at some point. Hopefully at launch. And what does AMD actually say about this? Rather narrow-lipped, Lisa Sue replied, "I'd guess he hasn't seen her (the Radeon VII) yet." She didn't want to do more about it. Even if one can assume that no manufacturer can hide his secrets completely.

Well, Nvidia's CEO is definitely not one who needs a 10-metre drive to stand, but usually more of a protagonist of celebrated self-control. Was it the relief of what was heard or a growing pressure that led the otherwise (in public) rather weighing-up CEO to say such words? One can only speculate, but this gait is new and definitely does not have to please you.

Vega VII, as presented yesterday, is not a really new graphics card, but actually with the Radeon Instinct MI50 an AI card in consumer garb (which in turn is a slimmed-down version of MI60). So from this point of view, Nvidia can speculate quite accurately what this card might (or may not have) on it. So it's not really secret for a while and AMD didn't have to change that much at MI50 in the end.

But now simply dismissing everything with "underwhelming" is an arrogance that one must (or want) to be able to afford (or want) with a loss of more than 50% of the share value of one's own company. I admit I had expected a little more, but without real tests, all the statements on such presentations can be enjoyed with caution. By the way, I mean more resilient details. The performance, if it gets there, is fine. Especially since the Vega VII does not represent the full expansion.

What distinguishes Vega10 from Vega VII?

The technical data is similar to that of the Vega-10 GPU, but only superficially. The Radeon Instinct MI60, for example, has as a full expansion over four raster units, 4096 shader units in a total of 64 compute units (CUs) and 64 ROPs. The MI50 and Vega VII only come to buyer with 16 instead of 32 GByte HBM2 memory and still offer 3840 shaders in 60 CUs. The 1.8 GHz maximum clock clock announced by Lisa Su also fits the Radeon Instinct with its 13.2 billion transistors on 331 mm2 chip area.

The rest is a bit of a post-Christmas speculator. At least as far as the details of Vega VII are concerned. Compared to Vega10, the new GPUs benefit from the doubling of the transfer lines to the storage interface, which can now connect up to four HBM2 chips (with a maximum of 32 GB) with the MI60 via a whopping 4096 data lines. The HBM2 memory clock has also been raised to 1 GHz, so that we are exactly at the mockingly mentioned "one terabyte per second".

The Radeon Instinct also has a higher double-precision floating-point power (FP64), which now equals half the FP32 speed. The ECC functionality, on the other hand, is of course not of interest to Vega VII, but the key data show that it is not only a 1:1 copy of Vega10. In addition, PCI-Express 4.0 and other details, which the public will probably soon find out.

You can also easily beat a GeForce RTX 2080 to the 300-watt limit (I did it several times today, by the way) and if Vega VII could perform at about the same speed, a MI60 ennobled to the "Vega VII XTX" would probably also (purely speculatively) against a GeForce RTX 2080 Ti still a small chance to at least lick their taillights cheekily. But at this very point AMD will have little room for manoeuvre in terms of price, because HBM2 is and remains expensive and rare. 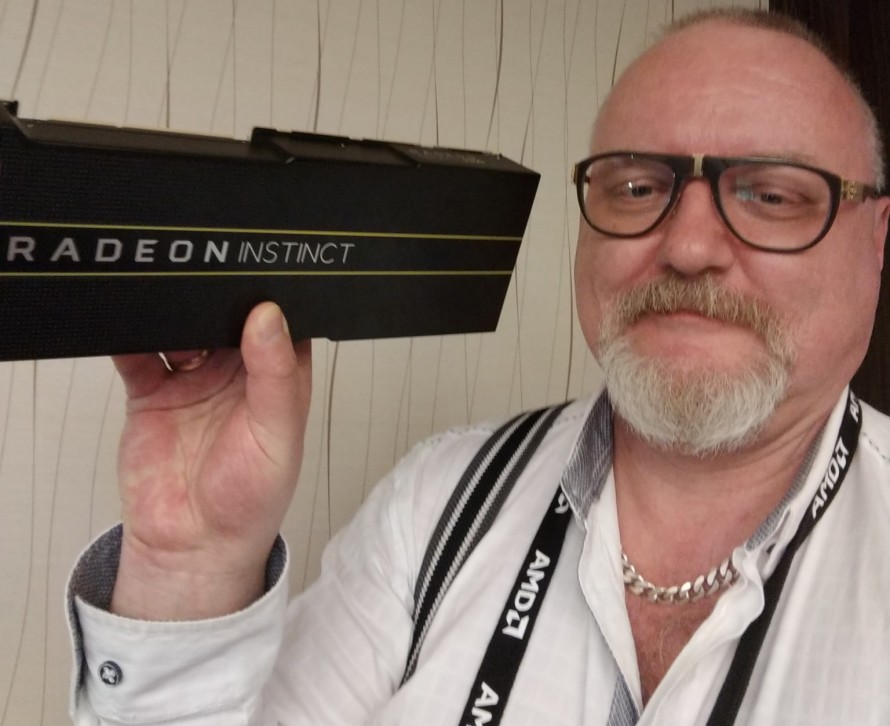 I myself see Vega VII more as a sign of life and the appeal to analysts and investors, which is also necessary. The general public will probably end up buying another card, no matter what it is called and whoever it will come from. But as a buyable exclamation point, Vega VII will surely also find buyers. Whether it's a noble gamer or a content creator.

From this point of view, I agree with Jensen Huang that it was nothing new. That's it in November at the launch of the Radeon Instinct. But then I find it a bit out of place to express myself so derogatoryly, because we also remember: the RTX 2000 series is a red-hot RTX Quadro for consumers and was anything but sensationally new at the launch. That was her in Vancouver to Siggraph and not in Cologne at Gamescom. Already forgotten?