Already at the beginning of 2019, Corsair presented the Capellix RGB LEDs developed together with Primax at CES, the “next stage” of multicoloured component lighting. With 40% less consumption, up to 60% more brightness and 35% longer life compared to conventional SMD LEDs, the new technology was promoted. A handful of items with the new LEDs are already available in Corsair’s product range, so now the first AiO water cooling system is being added. What the H150i ELITE CAPELLIX can do besides shining brightly you will find out in the following review!

The cardboard is printed in full colour and is kept in the well-known yellow-black of Corsair. On the outside, pictures of the water cooling system, listing of the contents and rough specifications and dimensions of the AiO are printed. 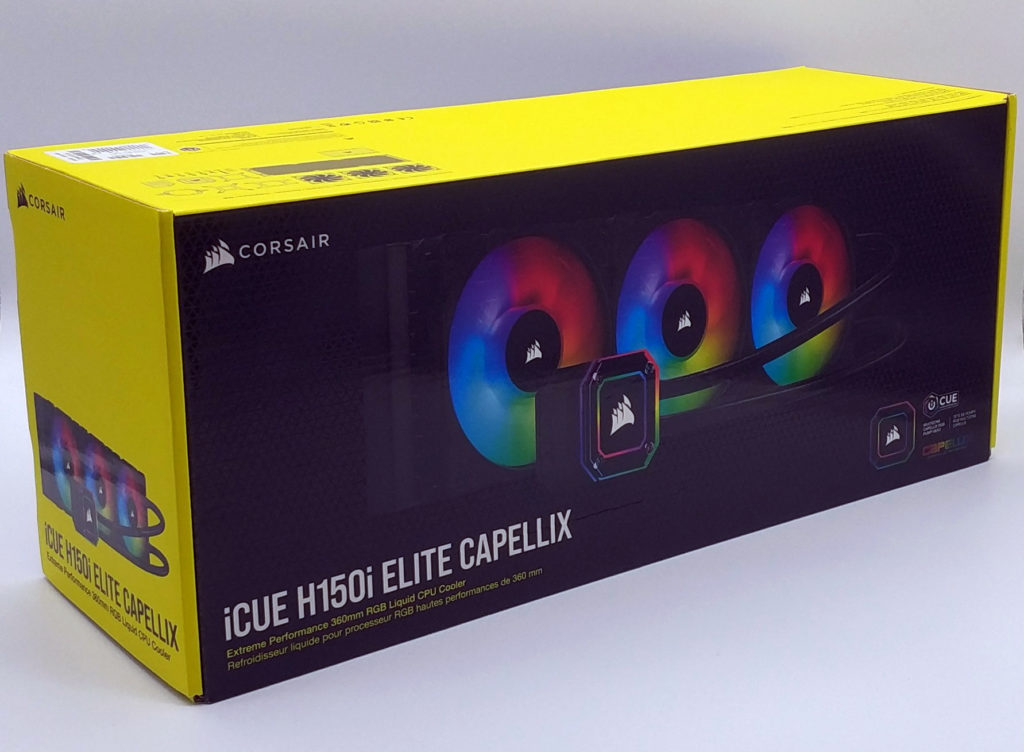 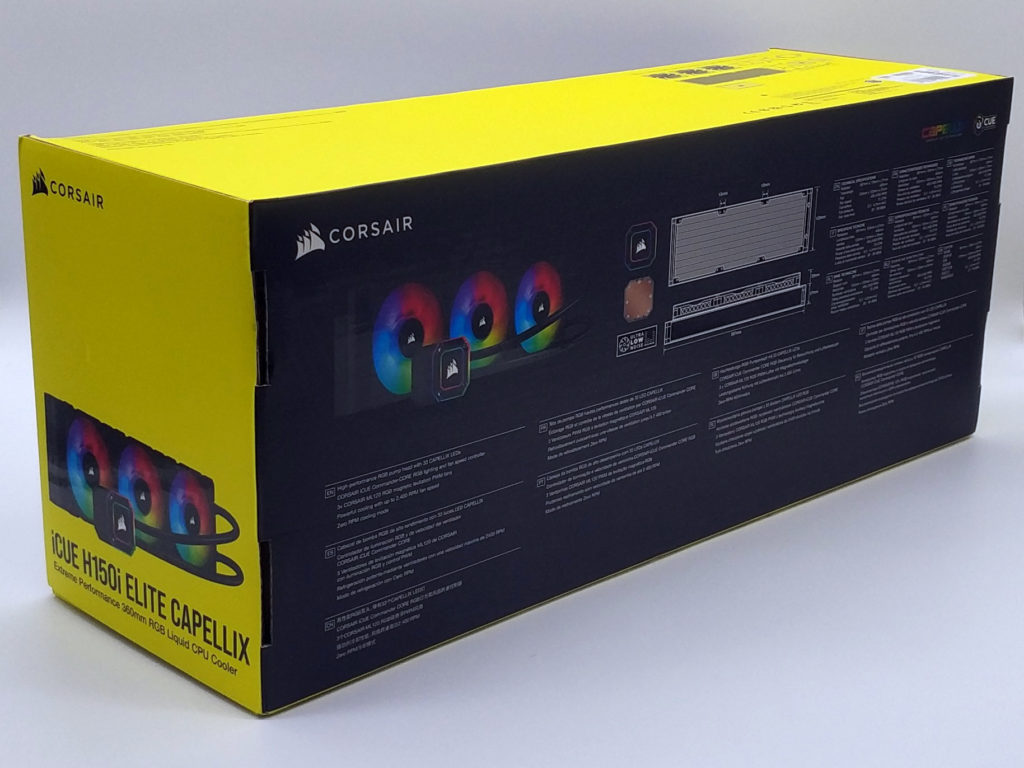 Inside the package the usual picture awaits me: cardboard tray to safely enclose the water cooling system and lots of plastic bags.  In addition to the warranty information, the manual is also enclosed in English only. 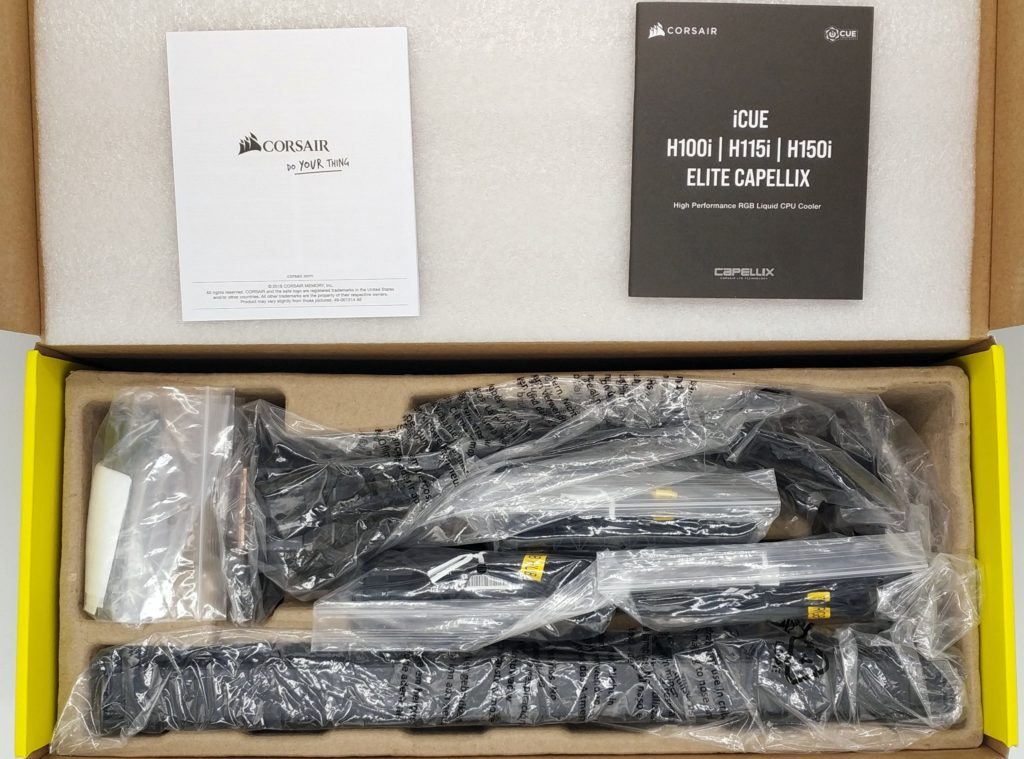 Finally outfitted, it is once again striking how similar Elite Capellix and the recently tested RGB PRO XT are not only in terms of packaging. However, striking differences are the different design of the pump block, ML120 RGB fans and the now no longer rounded corners of the mounting frame. Radiator and sleeved hoses seem to have been reused. 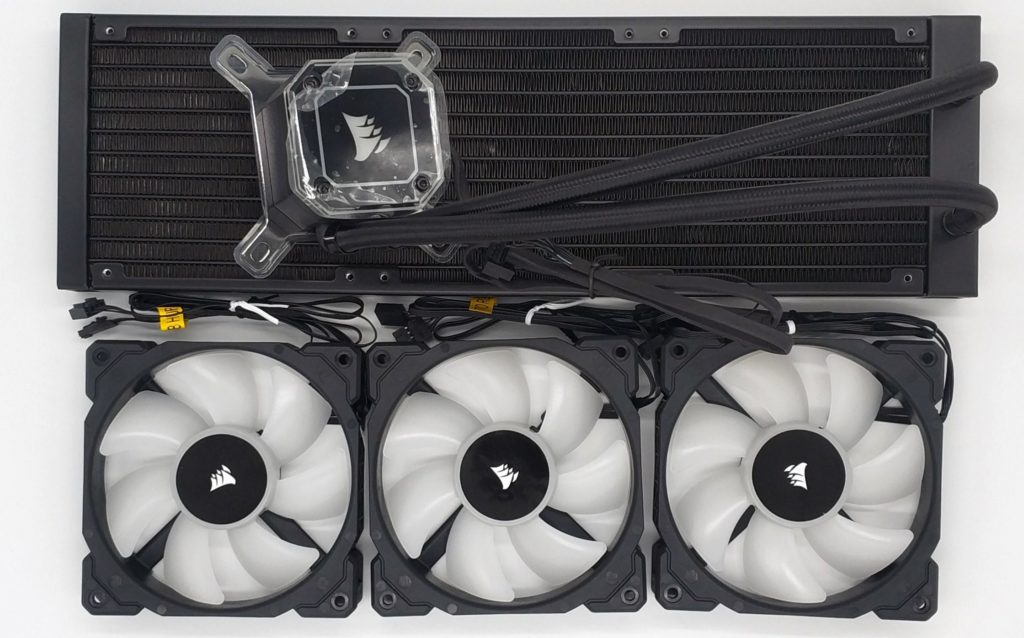 Corsair also uses the familiar mounting with brackets that can be plugged into the pump block for Intel and AMD mainstream sockets and threadrippers.  Accessories also include the new Corsair Commander CORE and an alternative transparent plate for the pump block.  The slimmed-down Commander PRO, now called CORE, can be connected to 6x 4-pin PWM fans, 6x Corsair’s proprietary aRGB connectors and a temperature sensor. The wide data connector of the pump block is also connected, the system is then connected via an internal 9-pin USB 2.0 port. Power is supplied via SATA, so you can thankfully save the Molex string on its modular power supply. 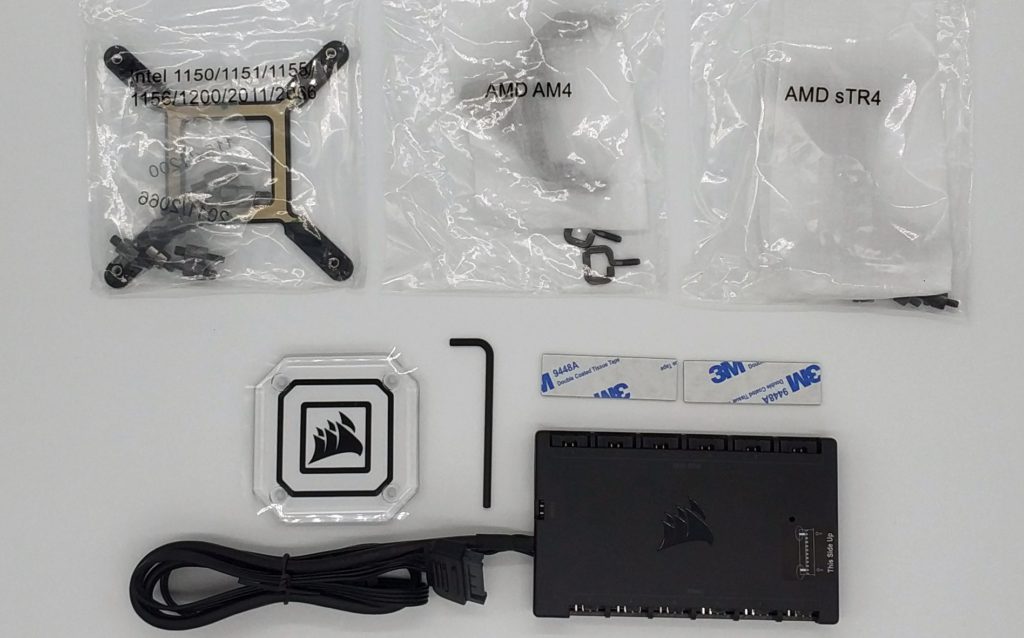 Fortunately, Corsair also retains the method of attaching the pump/cooling block for the AM4 socket. I had already praised this last time, I can only repeat it here. The block is simply placed on the CPU, the two eyelets are hooked into the bracket premounted on AMD motherboards and the whole thing is tightened with hand screws. A backplate is included for Intel sockets, which also has small adhesive strips for easy attachment. 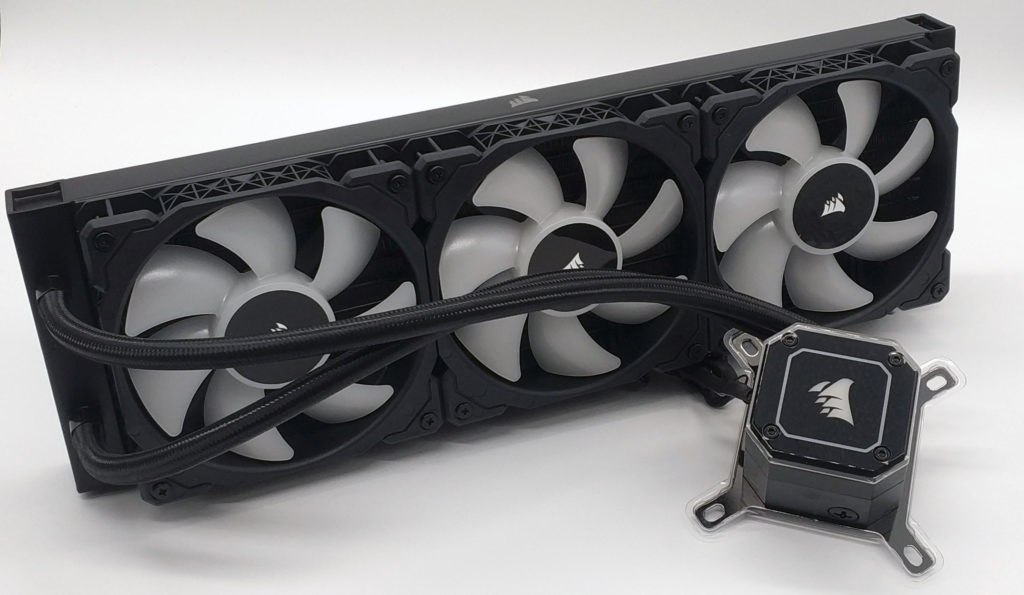 Corsair also shows again on YouTube how the assembly on the different bases is done. 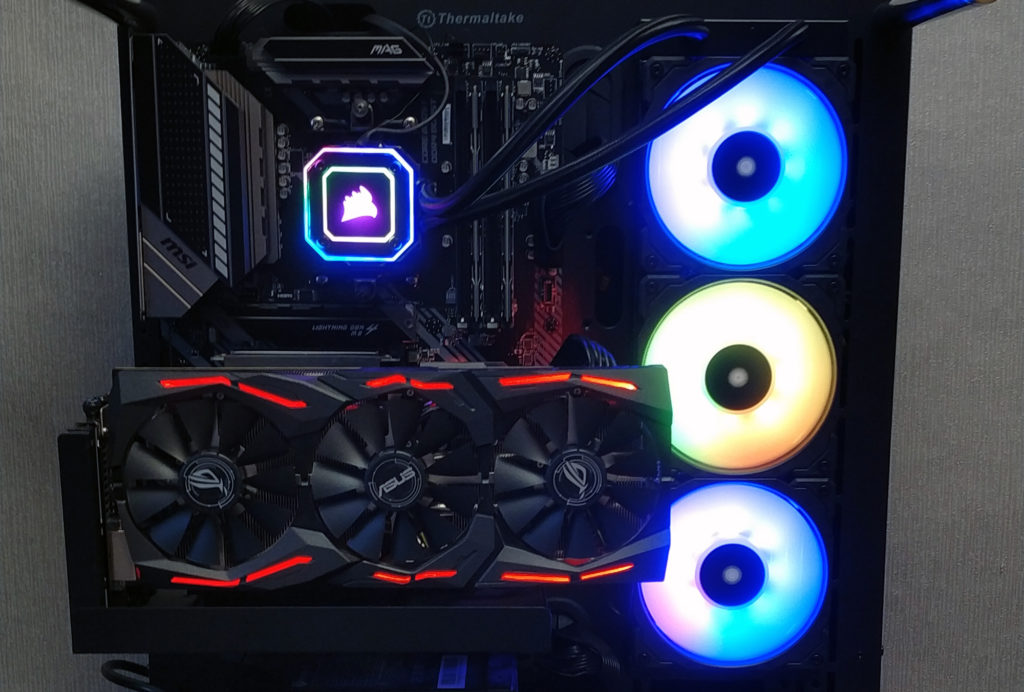 As was recently the case with the RGB PRO XT, there are also various blemishes in the radiator due to slight pressure points (so-called radiator cellulite), as is known with almost all AiO products …

… whereby the “back” is much better off. However, as usual, there are no functional restrictions due to bent slats. The whole thing disappears from direct view anyway after the fans are mounted.

Depending on your taste, this time you can also choose between two different plates for the pump block. The rather plain black cover is fitted ex works, but the alternative allows considerably more light to shine through:

The complete control is done via iCUE software, as usual with Corsair. We tested with a pre-release press version iCUE v3.33.246, currently available online is v3.32.80. At the first start I was promptly asked to update the AiO to firmware 1.5.131, which was done within a few seconds without further action. We have interesting times, now even the CPU cooler gets updates distributed!

Once in the program, the full splendor of the 45 RGB zones can be controlled under lighting effects, 21 on the pump block and 8 per fan. In the lighting library you can choose between various preset patterns, speed and direction can also be adjusted. If that is not enough, you can also create your own effects in the editor or import them from others. Effects that are possible in the background even without an iCUE service running can be found under hardware lighting. 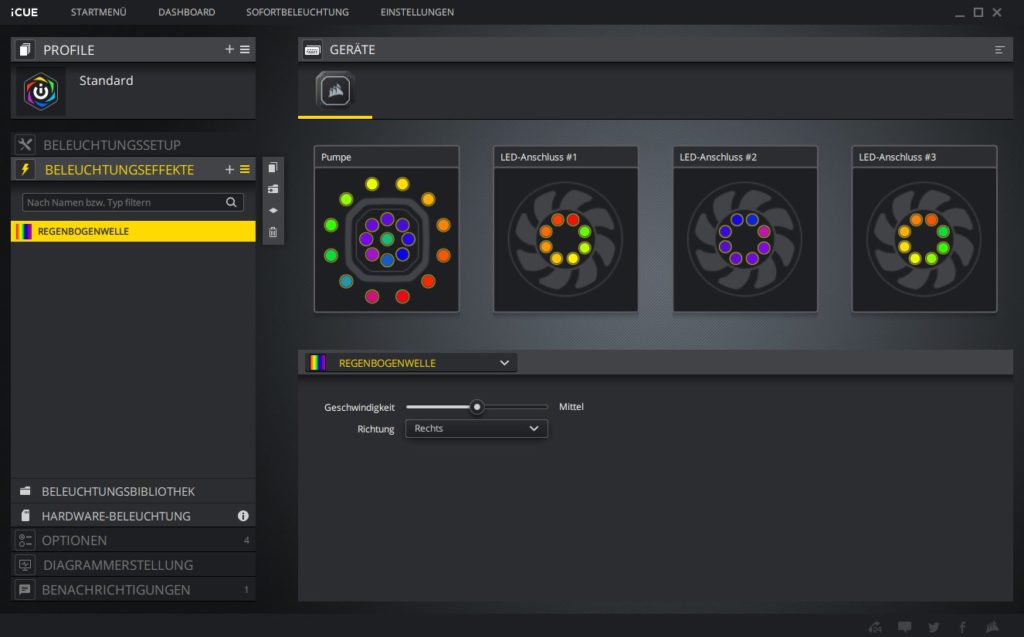 But much more interesting for us is the category Options, which controls the RPM values. In addition to the real-time speed, the temperature of the coolant can also be read out. Here you can choose between four different presets or create your own fan curves. However, user-defined settings are only possible for the fans; only Quiet, Balanced and Intensive can be selected for the pump. From 50 °C coolant, the fans are set to 100% PWM, at 70 °C the system is shut down. 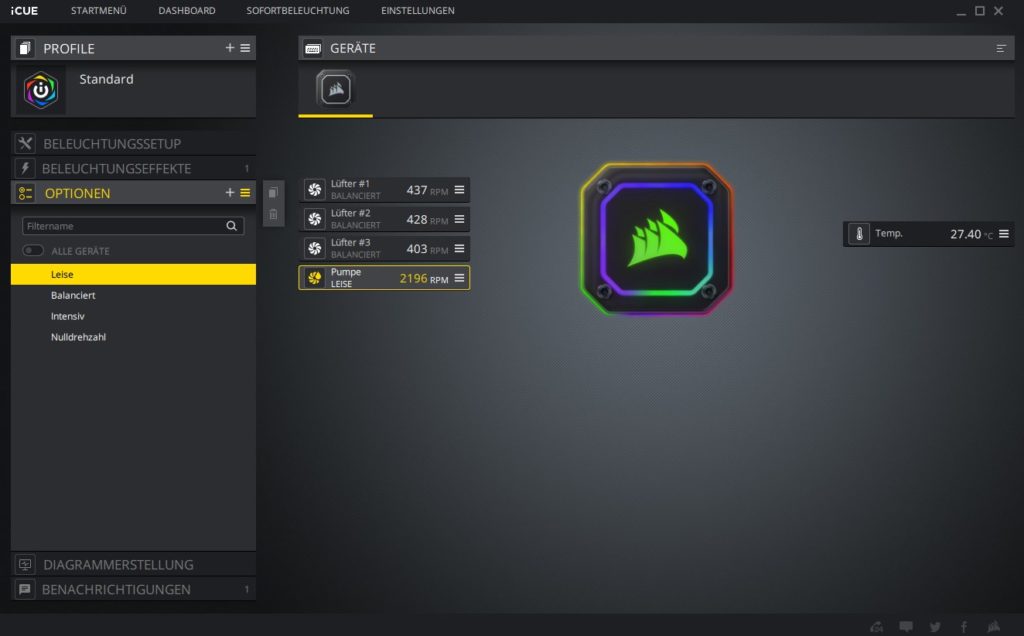 There is no product page at the time of the review, it will be published in the next days with the release of the cooler.  Below is an overview of the technical data of the new series: 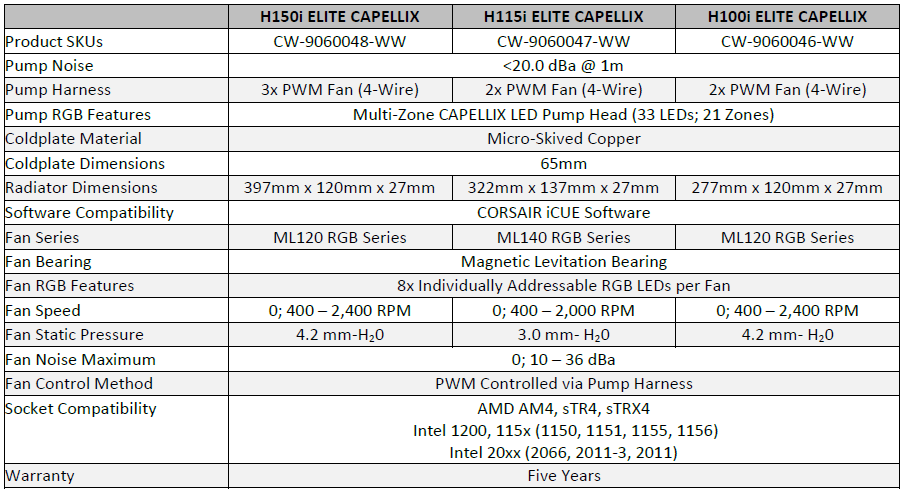