The fact that the small mobile DACs and headphone amplifiers cannot keep up with stationary devices should be well known due to their size and the associated technical limitations. But since I own some Beyerdynamic headphones myself as well as the A20 as a headphone amplifier, I was quite curious about the comparison. After all, they also advertise the Impacto Universal as a device that is specially adapted to their own product portfolio.

The review sample is a retail product that was purchased privately and provided to me by the community unopened and in its original packaging. Since I like to use such devices myself, I was even more curious to see if there was a difference to similarly designed devices with the same chip, which by the way can be found in well-stocked online stores starting at about 80 Euros. Because one thing has to be said first, when it comes to the evaluation of optics, haptics and functionality: with 379 Euros the Impacto Universal is definitely not a cheap offer. That’s setting the bar pretty darn high. 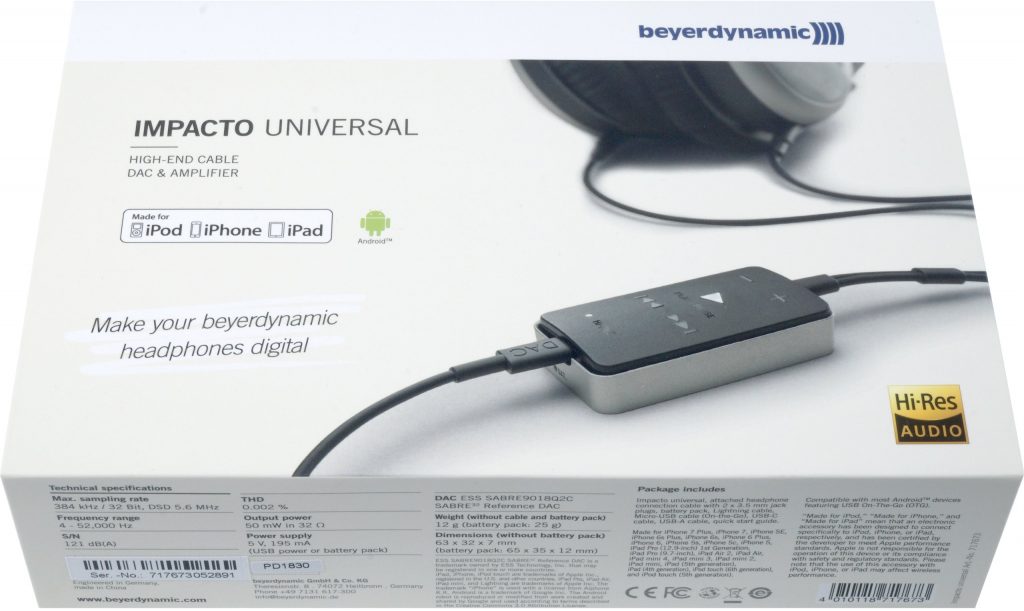 What is Hi-Res Audio?

This almost worthless bogus label is currently stuck pretty much inflationarily on everything that even has a plug. For those interested: it is not HRA (High Resolution Audio), but the similarity has certainly not been chosen so unintentionally. It’s a bitch to… The JAS (Japan Audio Society), as the leading organization behind the Hi-Res label used by Sony for the first time years ago on its own turntable, stipulates for analog devices, for example, that a “performance of 40 kHz or above” must be achieved for amplifiers (which is what we are talking about). This label is also not “awarded”, you have to pay for it. So you just buy into it.

Furthermore, the JAS does not say anything about the actual reproduction quality and the required parameters, but merely raises the upper limit of the frequency range to twice that of conventional amplifiers, without, however, specifying any tolerance limits. What sounds really good in the end is up to each company to decide: “Listening evaluation process is added and final decision as Hi-Res Audio product to be proven according to each company’s sound evaluation standard“. So basically absolutely worthless and a shame about the ink. The fact that such a traditionally oriented company would indulge in such marketing stunts was the first disappointment.

Scope of delivery and accessories

The Impacto’s use in the mobile sector can also be seen in its accessories. There are even two versions: the Impacto Essential, which only works with Android devices with USB OTG as well as PCs and laptops for 329 euros, and the Impacto Universal from this review for a hefty 379 euros, which is also compatible with mobile Apple devices and comes with a battery pack. Besides the two Apple cables, you get a USB-A to C cable (notebook, PC) or a pure USB-C cable (Android, PC, notebook). The Li-Ion battery pack with the specified 2.85 Wh is also available.

Furthermore, if you don’t own any suitable headphones from Beyerdynamic, you should treat yourself to the additional adapter, which merges the two jack plugs at the output back into a 3.5 mm stereo output. They fit without adapter directly into headphones like my Amiron Home or T5 and replace the long connection cable, but these two cables are with the almost 40 cm then again a bit too short. That will catch on the unfolded table when sitting on the plane and tear off if the carrier significantly exceeds the Asian grade body measurement. The 10 cm more would have been also still in it. 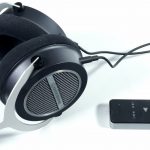 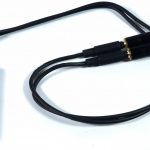 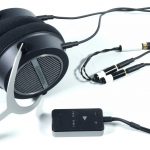 The magnetically clipable battery pack is actually a must when operating on the smartphone. It is supposed to go without, but on the P30 Pro this was not possible, despite USB OTG. You need a fully charged pack to be able to really use the sound. Then the whole thing weighs about 50 grams (instead of 12 grams) without the cable, but is still pleasantly light. Beyerdynamic writes of approx. 5 hours of battery operation, which can even be achieved when listening rather quietly. Otherwise, about 3.5 hours of party use are possible after the ample 4 hours of charging time. More is not possible and a quick charge function is unfortunately also not available.

The body is made as a monoblock, i.e. everything is completely glued or welded and later covered with rubber coating. Haptically this is a disaster from my point of view, visually unfortunately as well. You should really zoom in on the image below to understand the issue. The device in the photo was taken out of the packaging in exactly this condition and I don’t want to know what it looks like after a week. It also feels plenty sticky, which is actually a no-go haptically in this price range. Once again as a reminder: 379 euros are due for this and it is the second disappointment.

The operation via the backlit keypad is intuitive and self-explanatory, the rest is standard for the class.

The technology inside: the ESS SABRE9018Q2C

The chip from ESS, which contains a powerful DAC and a reasonably usable headphone amplifier, we already know from many applications up to good motherboards. It is designed in such a way that the external wiring is also reduced to a minimum. In addition to the relatively low price of less than 8 USD, complete solutions can be realized with very little effort for well under 20 USD manufacturing costs, if you don’t go overboard with the tooling. The ESS SABRE9018Q2C is really good as a DAC in particular, as it is a high performance 32-bit, 2-channel audio D/A converter with integrated headphone amplifier and output switch. 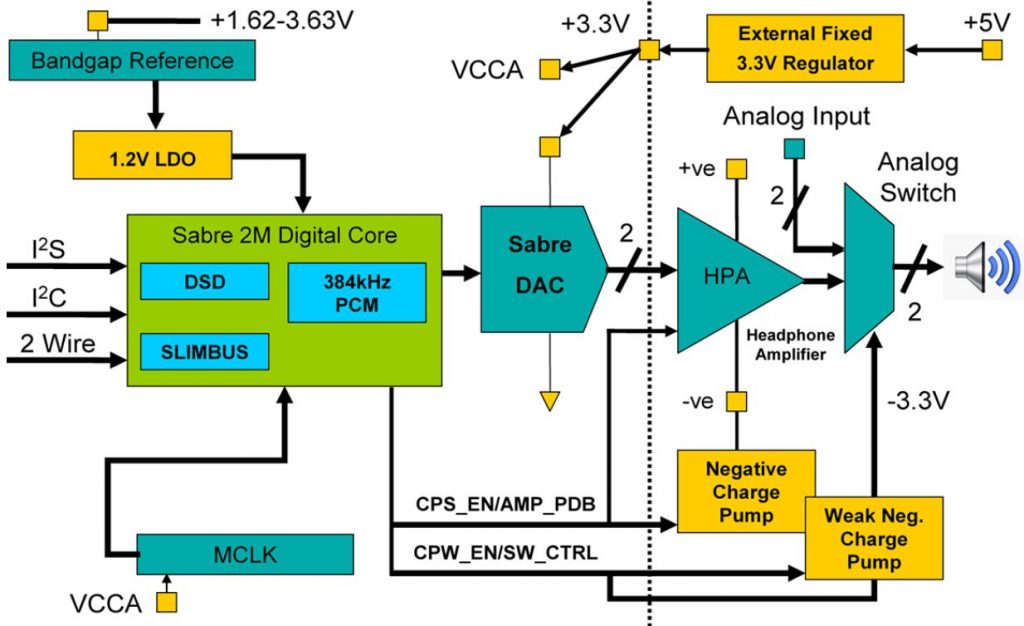 This SOC is designed for audiophile portable applications such as mobile phones and digital music players, consumer applications such as Blu-ray players, audio preamps and A/V receivers, and professional applications such as recording systems, mixing consoles and digital audio workstations. The 32-bit HyperStream DAC architecture and Time Domain Jitter Eliminator allow for quite decent DNR values of up to 121dB and a THD+N of -115dB. The DAC can cleanly process up to 32-bit 384kHz PCM data via I2S. Both synchronous and ASRC (asynchronous sampling rate conversion) modes are supported. That’s good.

The headphone amplifier delivers the usual 2 volts at 250 to 600 ohms, i.e. about 7 mW. This is neither enough for the T5, nor for the Amiron Home for a clean full control, but for mobile use and on the road it is sufficient. The 50 mW at 32 ohms is acceptable, but also no revelation of the small chip, if you keep the price in mind. Because a Sabaj DA3 relies on a very similar circuit board, still offers an OLED display, the more valuable housing and costs not even 90 euros. Well, without battery of course. But there are 2 outputs for this.

Regardless of whether the headphones are of your own brand or not, the ESS chip delivers the usual good sound at almost all impedances. Since the characteristics can be easily adjusted via the external circuitry, you get a slightly treble-heavy, but never too shrill reproduction, which is quite convincing, if you like this kind of playing. However, the Impacto is more suited to the slightly muffled Amiron Home, while the T5’s high frequencies from around 4 KHz upwards sound very tortured to metallic at times above a certain volume level.

It simply lacks the airiness and reserves of a good external headphone amp, as the ESS chip’s small amp already struggles with a bit of pumping at higher levels when short, dry bass gets in the way. Kettledrum and strings together only get along foam-braked and here one should, also with regard to a really clean reproduction, simply leave it at medium volumes. That is of course complaining at a very high level, but you have to be able to cope with that at well over 300 euros for the ticket. 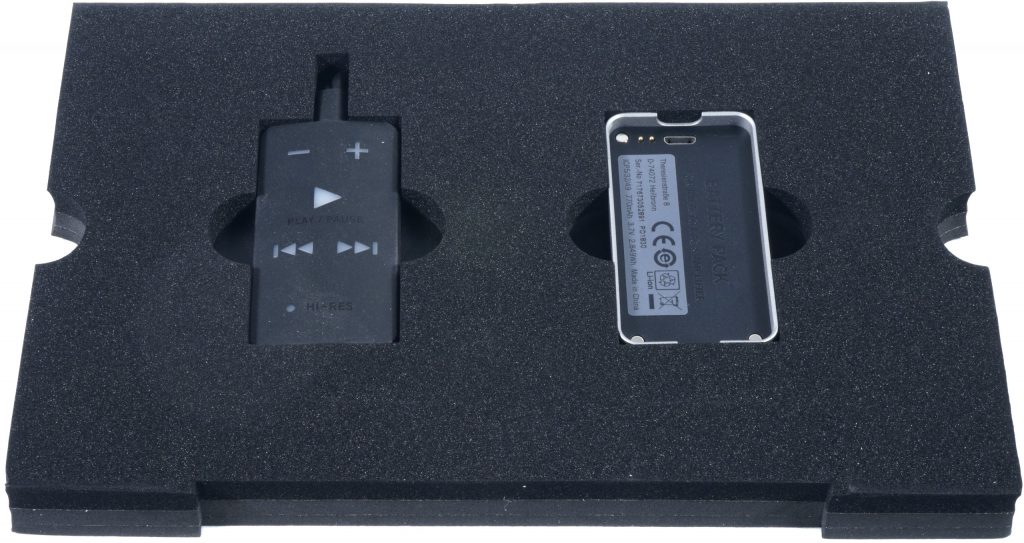 On the plus side are the (unfortunately a bit too short) direct cabling for the own products and the DAC including its capabilities. The integrated headphone amplifier is acceptable, the battery and runtime rather mediocre. However, the charging time is quite high, and a Quick Charge function is not found. Connectivity is good, the included cables are functional and sufficient. So everything could have ended well up to this point, because although rather cheap electronics were installed, everything still fits together.

What’s really questionable, though, is the unstable-looking little plastic case with the very basic and haptically off-putting rubber coating over it. This is pure mud flap, as the Impacto is already dusted and caked out-of-the-box. With such a high price, one could have expected a high-quality implementation here. If you compare the Impacto with the other quality standards of the manufacturer, then I can not understand the offered. Here one should have insisted on a better QM with the Chinese Supplieren and should have made also once controls.

Since Beyerdynamic is doing the press work themselves again, the years of contact with the former press agency was of no use to me either. Unfortunately, the PR employee in Heilbronn could not be reached for a clarifying telephone conversation within three weeks, and there was also no in-house representation. So I’m posting the test now without prior consultation anyway, even though this sort of thing isn’t my style. It’s a shame, but it can’t be helped. One can definitely not recommend the Impacto, no matter in which of the two versions, at least for the advertised price. Here you put the good brand name on an almost irrelevant OEM product and garnish the whole thing with a completely useless label. Around 100 euros would be ok, but not much over 300 euros.

And here’s the good news, right at the end

The Impacto Essential without battery pack is currently being sold as B-ware in the company’s own outlet for a mere 49 euros! This again is a bargain for all onboard sound victims, which I discovered rather by chance when the article was already finished. For just under 50 euros, the criticized is of course relativized, because it reduces the impacto to the installed electronics. And that goes for 50 euros completely in order!

CPU heatspreader examined in detail – do we now have to redesign the coolers for AMD and Intel? | Basics
Up to 17% more FPS at 1080p Ultra! | Cyberpunk 2077 in a big RAM test roundup – clock rates and ranks