Currently, there are many patches, new BIOS versions and various minor teething troubles with selected motherboard and CPU configurations, for example regarding the maximum achievable fabric clock rate. Unfortunately, most people quickly forget about a problem that could disturb the new Holy Trinity of motherboard, CPU and graphics card: certain basic BIOS settings and a Windows installed inappropriately. After the announcement of the new Radeon features by AMD’s CEO Dr. Lisa Su, a problem remains unmentioned that could well have its revenge in everyday life. To avoid disappointment about a feature that might be “missing”, we should definitely talk about it BEFORE.

SAM needs a resizable PCI BAR, but what is that actually?

At the presentation of the new Radeon cards, AMD also showed SAM, or Smart Access Memory. This is nothing else but the clever use of the Base Address Register (BAR) and exactly this support must be activated. With modern AMD graphics hardware, size-adjustable PCI Bars (see also PCI SIG from 24.0.4.2008) play an important role, since the PCI BARs are normally limited to 256 MB, while the new Radeon graphics cards offer up to 16 GB VRAM.  The consequence is that only a fraction of the VRAM is directly accessible to the CPU, which requires a number of workarounds in the so-called driver stack. This of course always costs performance and should therefore be avoided. So that’s where AMD comes in with SAM. This is not new, but must be implemented cleanly in the UEFI and activated later. This in turn only works if the system is running in UEFI mode and CSM/legacy is deactivated. 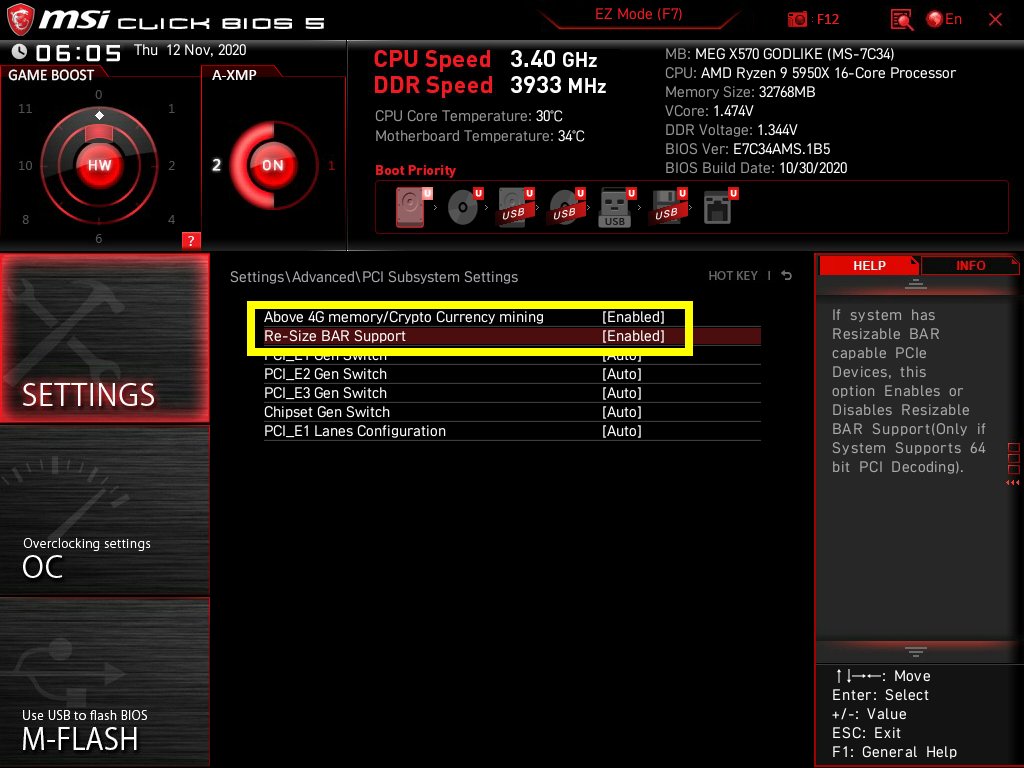 More must not be revealed for reasons of existing NDAs, but the appropriate document of the PCI SIG has been publicly available since 2008 and this is exactly what I am referring to. Interested readers are welcome to browse here.


Also interesting: AMD UEFI Inside: What is really behind AGESA, the PSP (Platform Security Processor) and especially ComboPI?

Does Windows run in UEFI mode in Windows or not?

With the graphical interface, a UEFI (Unified Extensible Firmware Interface) can be operated much more conveniently than the older BIOS and also offers significantly more functions. The UEFI ensures that after the PC is switched on, its components are correctly recognised and this is exactly what becomes important. But was the operating system, i.e. your Windows, really installed in UEFI mode? Some motherboard manufacturers have already selected (and specified) UEFI in the default settings at delivery, while other manufacturers use the so-called CSM mode as default. And that’s when it gets gross.

CSM stands for the Compatibility Support Module. The Compatibility Support Module is only available under UEFI and it ensures that older hardware and software also works with UEFI. The CSM is always helpful if not all hardware components are compatible to UEFI. Some older operating systems and the 32-bit versions of Windows cannot be installed on UEFI hardware. However, it is precisely this compatibility setting that often prevents the clean Windows variant required for the new AMD components from being installed.

First you have to check in the BIOS if UEFI or CSM/Legacy is active and if not, make this step absolutely necessary.

Only then you can activate and use the resizable PCI-BARs at all, but stop – will your Windows still boot at all? To find out whether Windows is already running in UEFI mode, press the key combination Windows + R and enter diskmgmt.msc in the dialog box that appears, or right-click on the Start menu to start Disk Management. After the program has opened, right-click on the system drive, e.g. “Disk 3”, on which Windows is installed (“C:”)

Selects the properties from the context menu and switches to the “Volumes” tab. If the entry “GUID Partition Table (GPT)” is located there under Partition Style, then Windows is already running in UEFI mode. If the entry is Master Boot Record (MBR), Windows was installed in the conventional way and you are left with the UEFI-BIOS after switching to UEFI-Mode because the system does not boot anymore! 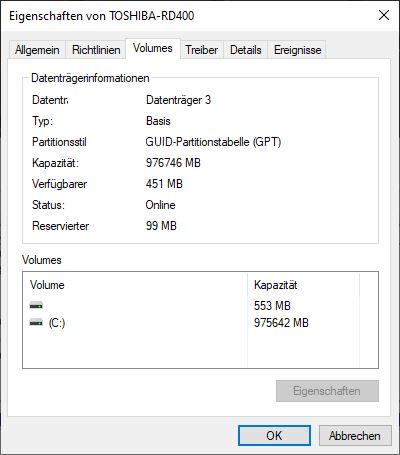 MBR instead of GPT, what now?

With the disk management of Windows the conversion to GPT unfortunately does not work at first. So what to do? With the Aomei Partition Assistant Standard it works anyway, even in the free version. This software converts your MBR drive to a GPT drive, even if Windows is on it. Nevertheless, this is only possible with a few tricks, because as long as Windows is running from this system disk, nothing works with it.

Now you either have to remove the hard disk and copy it to another computer with the tool, because then it is not a system disk there, or you create a bootable recovery CD directly under Aomei Partition Assistant Standard, which then contains the tool, and finally perform the conversion over it. That the UEFI mode only works with 64-bit Windows should of course be clear to everyone.

If you’ve always wanted to reinstall your Windows, now you finally have a solid reason. So get into the BIOS, activate UEFI (thus deactivating CSM) and reinstall Windows after the reboot. And don’t forget to first delete all existing partitions completely during the setup process. But I do have one small side note after all. Those who still use very old components that are not compatible with the UEFI have been unlucky in this respect. So please check first, then it also works with SAM, oops, the Resizeable BARs.

By the way, NVIDIA is also working on a solution to this problem, so even the green hardware junkies will be allowed and even required to think about UEFI and their Windows. It’s about time anyway. The rest is then readable in the launch review. So keep at it!

The capability for resizable / larger BAR is part of the PCI Express specification. NVIDIA hardware supports this functionality and will enable it on Ampere GPUs through future software updates. We have it working internally and are seeing similar performance results. Stay tuned.