Leaks are especially valuable when a board partner leaves things on their website that would have been better hidden. But that's exactly what happened on an AMD partner site, and the content found there is also some of the rumours from the head in relation to Big Navi. Because first of all there is the name: RX Gamma XT. My special thanks go to Our colleague Usman Pirzada from wccftech.com and an AIB employee, who were happy to share or confirm this information.

And because we are just so beautiful – the (double) star Gamma Cassiopeiae is often referred to as Navi, even if this name is only due to the joke of a US astronaut and actually has no scientific significance. Gamma (Cassiopeiae) could therefore also be called a corrective for Navi, where Navi stands only for navigation star. The interested reader can also googling the rest, because it is about graphics cards. 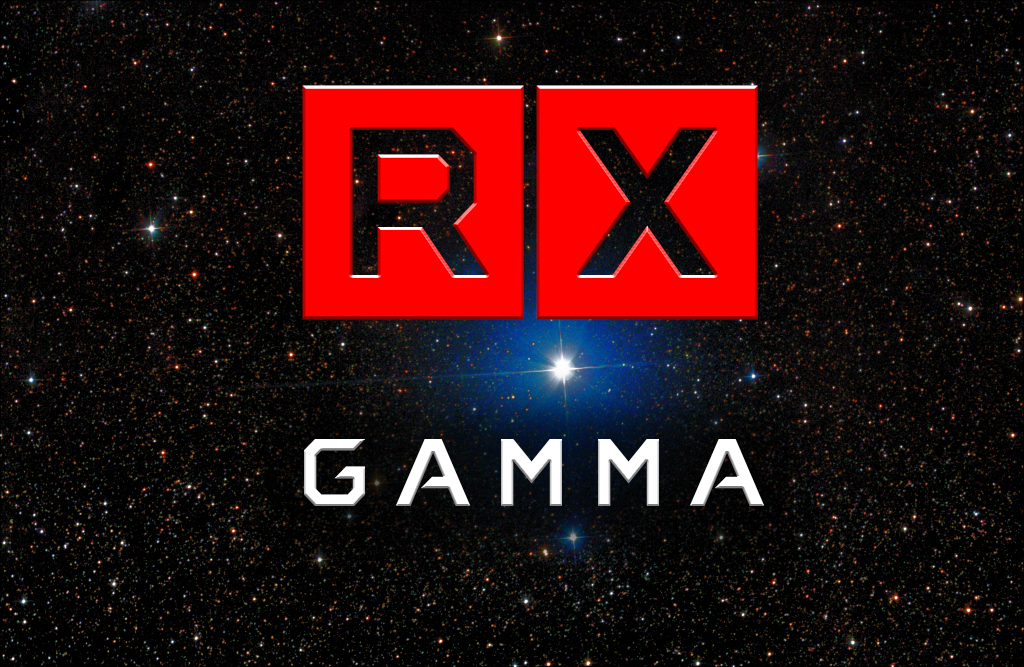 The leaked slides of the internal presentation seem to have been shared by AMD with its Baord partners (AIB), who in turn use such content to describe the so-called reference design, which will be used later with one's own models. But even with Navi, only reference models were initially labeled by the AIB, so that the advertising message is quite understandable. If you believe the leak, it will be a dual fan design, although you've seen the rest of the design on the slides in a nicer way.

The block diagram of the upcoming Gamma XT GPU has also been leaked in this way. In detail, this reads quite interestingly, because the computing units have been virtually doubled and are now called QCU or QCU. Quad-compute unit. What is positively surprising is the fact that the card is supposed to reach a clock speed of 2.633 GHz – which seems quite crazy in this context. Such an immense jump in clock rate can probably be justified most likely by an EUV-based 7 nm process, which TSMC plans to do this year and from which AMD was probably able to secure resources. 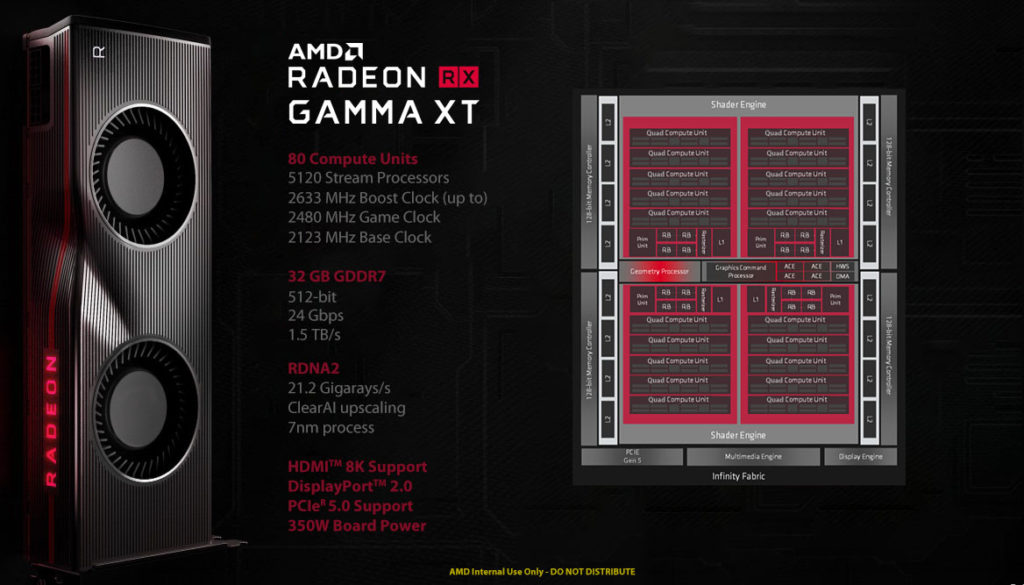 In total, the map contains 80 calculation units. Since the slide mentions 5120 stream processors, we can now easily put aside the rumors of an increase in the relationship between CU and SP. It's still 1:64. As with small Navis, the clock rates are divided into 3 categories, with the highest clock rate ranging up to 2633 MHz. Based on this clock rate and assuming the same structure as the current architecture, this map could perform well with 26.6 TFLOPs single-precision compute.

This would be a phenomenal leap compared to the last generation and is then not only due to an increase in the core number, but also by an increase in clock rates. It also looks like AMD has doubled ray tracing performance to up to 21.2 gigarays per second. Nvidia's current generation consumer flagship, the RTX 2080 Ti, can only have a Gigaray number of 10. That would be more than double for the RX Gamma XT.

What looks like a competitor of DLSS is then also listed: "ClearAI-Upscaling". Depending on the price point, this could well prove to be the TITAN killer that all AMD faithful have been waiting for for so long. And where PR slides pop up, of course, benchmarks aren't far away, where you'll be optimistic about Nvidia's upcoming flagship in the bar battle: 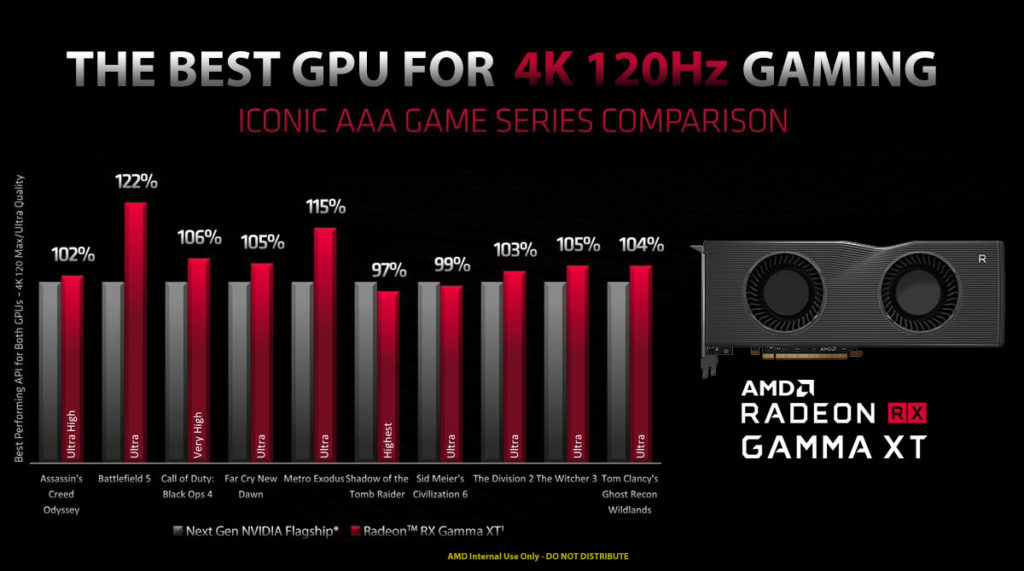 The card will be based on the DisplayPort 2.0 and PCIe 5.0 and will be based on a TBP (total power consumption of the card) of only 350W. A 512-bit bus connects the 32 GB GDDR7 memory, which is clocked at 24 Gbps. HDMI in 8k is supported for those who already have suitable displays. The map is based on AMD's RDNA2 architecture and a 7-nm process (probably the 7-nm EUV of TSMC).

All this sounds optimistic, very optimistic. However, I can only advise to emotionless serenity, because whether red or green foils, in the PR departments you quickly sell your own grandmother as Miss Germany. But there is also a grain of truth in every slide. So from this point of view it could be a hot late autumn.

Playstation 5 – The clock rates of the PS5 are set fully automatically, no influence for the developers
Igors Best-of Review – Exceptional Enclosure and PC Projects | 2016 to 2020