Let’s put it this way: it would have actually surprised all of us if NVIDIA didn’t use this hotspot reading as well. The only thing is that the usable interface for common third-party software is somewhat sparsely documented. It is only a question of time that sooner or later we will succeed in uncovering this little “secret”. But what is actually behind the GPU temperature and this ominous hotspot? Today I will try to simplify this and also compare it.

The difference between Average and Peak

In the meantime, there is not only one single temperature sensor (“GPU diode”) in every chip, but there are many, many sensors, whose exact positioning is of course a well-kept secret. The firmware in turn contains a very specific algorithm, which weights all these single values and then forms a kind of average value, which can also be read out. AMD internally calls this “Edge” temperature, NVIDIA simply writes GPU temperature. That both variants nevertheless differ in details is quite likely, but the principle is at least very similar.

And the hotspot? Up to now, at least with AMD graphics cards, it was also possible to read out the so-called “hotspot” temperature, which then represents the hottest part of the chip. Here, too, it is not entirely clear exactly how the value is arrived at and how many sensors are used to determine the value. AMD uses this “hotspot” value for telemetry, because large parts of the fan control and safety or shutdown functions are based solely on this limit and not the average. Let’s take a look at a Radeon RX 6800XT with GDDR6 memory: 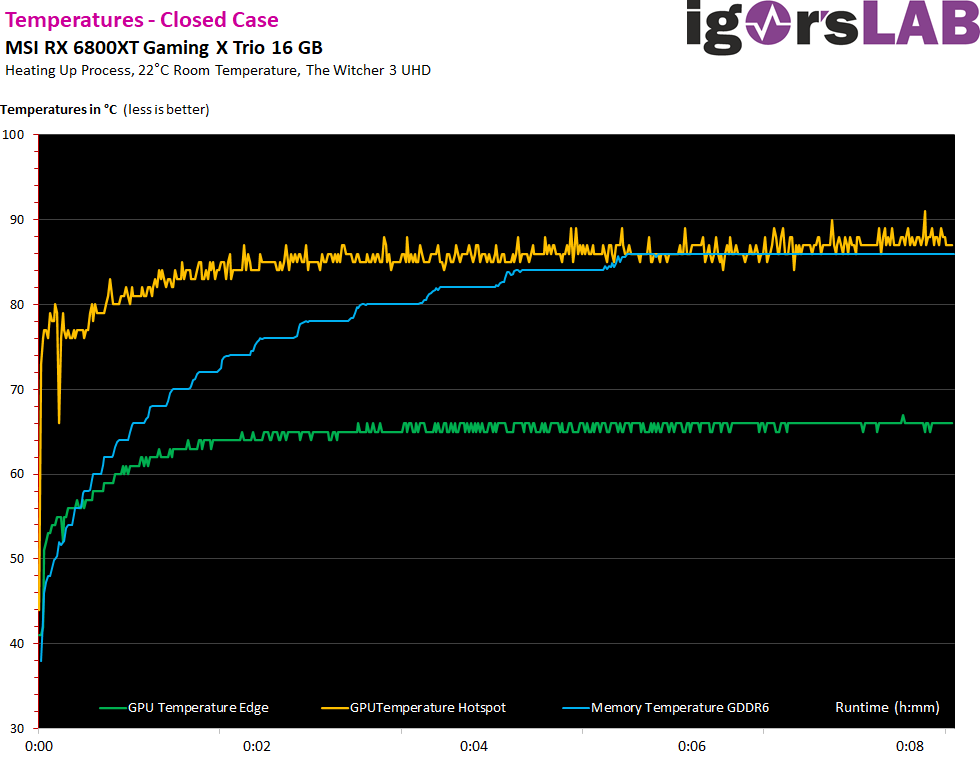 Depending on the cooler and the applied load, the difference between the edge temperature and the hotspot is between 12 and 20 degrees. It can be much more, but then exactly this difference is also a very good indicator that the cooler is not optimally applied! Up to now, AMD cards depended on an absolutely clean support and mounting, but GeForce cards also want to be mounted properly. You could often observe that the GPU temperature was actually still below the temperature limit in air-cooled cards, but it still came to a slight throttling or the excessive rotation of the fans.

Now let’s look at the hotspot temperature curve I read on a GeForce RTX 3090 compared to the other two temperatures, analogous to the Radeon graphics from a moment ago. What is striking again: The green curve for the GPU temperature is much more balanced than the yellow curve of the hotspot temperature. The fact that decimal places are also read out here with the Hotspot is unimportant, because the gradations are nevertheless finer. In the end, of course, this confirms the thesis that the hotspot contains only the hottest sensor, or at least a few sensors, while the average effectively smooths out and downright swallows up the outliers. With NVIDIA cards, I’ve measured between 11 and 14 degrees difference between the temperature readings so far, which is significantly less than the difference with the Radeon cards, even though the GPU along with the package is significantly flatter on the Radeons. Either NVIDIA uses completely different sensor positions here, or the chip itself has fewer real hotspots. So far, this could not be clarified exactly (and probably won’t be). Nevertheless, a significantly higher hotspot value compared to the GPU temperature is also a very reliable indicator for a non-optimal cooler mounting at NVIDIA.

In the next beta version of HWINFO the hotsport value will be displayed after several verifications and plausibility tests. Just below the GDDR6X temperature, which has also been hidden for a long time. Hobbyists and enthusiasts will certainly appreciate this service, because you can check the quality of the radiator assembly pretty well based on the hotspot compared to the average temperature. That can also give you a good amount of confidence at the end of the day. 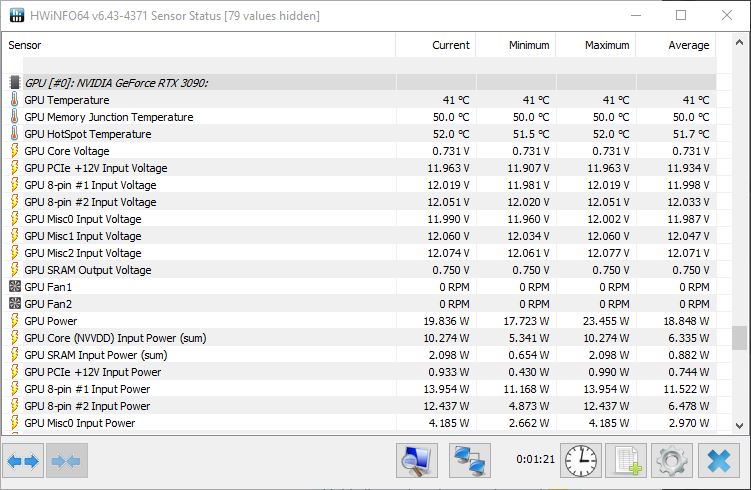 
I experienced things like: - Some meter turning on only if another meter is turned on. (stack confusion in HWInfo) - My layout being disrupted when something else shows up (new device) - Therefore I needed to rebuild my custom layout many times over in the last month. Question: Can we have...