Alphacool has introduced a new thermal paste with the Apex, which should also hold its own against the in-house brands Subzero and Phobya Nano Grease Extreme with a thermal conductivity of 17 W/mK on the market. If you follow the manufacturer, then the main goal in the development was, of course, to increase the thermal thermal conductivity, but above all to improve manageability and durability. Therefore, viscosity and long-term consistency must not be ignored. High contact pressures, like on the current Intel CPUs or graphics cards, asymmetrical hotspots like on the Ryzen CPUs and some humps on the IHS want special attention here. According to Alphacool, the main ingredient of the Apex Thermal Grease is said to be a nano-powder with a very low thermal impedance.

The thermal paste is delivered in a 4g applicator with a screw cap. The amount contained is sufficient for several applications and can be stored in the applicator protected from drying out. The Apex will be available in the Alphacool online store (item number 1022240) on 06/16/2022. This is the official press release about the product. But there is also a little story to it, because you can (let) fill what you want and the market gives, so that the margin is right. But is that really doing yourself any favors? 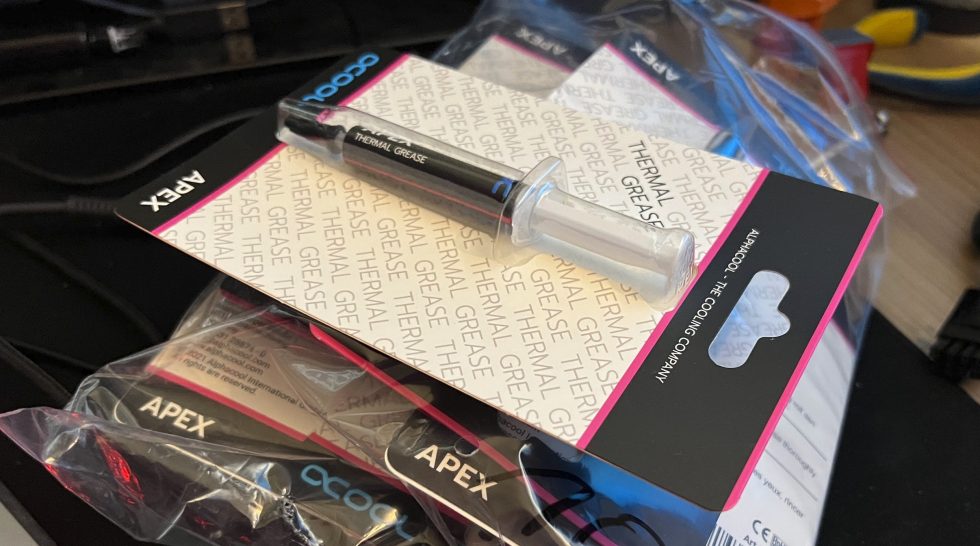 Hands-on test of a different kind

I have to come out of the closet, because I’ve been using this paste for quite some time, so I’m not entirely uninvolved. That’s exactly why I will not publish a single test here, because it is always easy to find something good that you have already extensively tested and selected yourself in advance. Since you do not have to give his name in the end and pretend that you are the inventor of the holy paste gral, for that there is the chemical industry and specialized suppliers who know what they are doing. The fact that suppliers like Alphacool buy these products and do not manufacture them themselves has not been a secret for a long time.

However, not all acquisitions are the same. In order to find a product that, in addition to its advertised thermal conductivity, is also user-friendly and durable in the long term, you really have to test and compare it for a long time in advance. By the way, the pastes of most suppliers are very similar, because much actually comes from the same pot. A little customizing at the filler (diluting or coloring) and the new (old) product is ready. However, with a bit of bad luck, this can change from year to year or bottler to bottler.

However, it is also possible to test special industrial pastes again and again over a long period of time and to use usable samples in very special applications for a longer period of time. And once you have found something, then the source counts above all, because large, renowned manufacturers also offer a consistent quality of products over the years. With intermediaries, such as many pure bottlers, this is much more difficult. So as a company, you’d rather buy the original right away and know what you can still offer tomorrow. You just have to look for the right one, because the variants are as diverse as the often quoted sand by the sea. 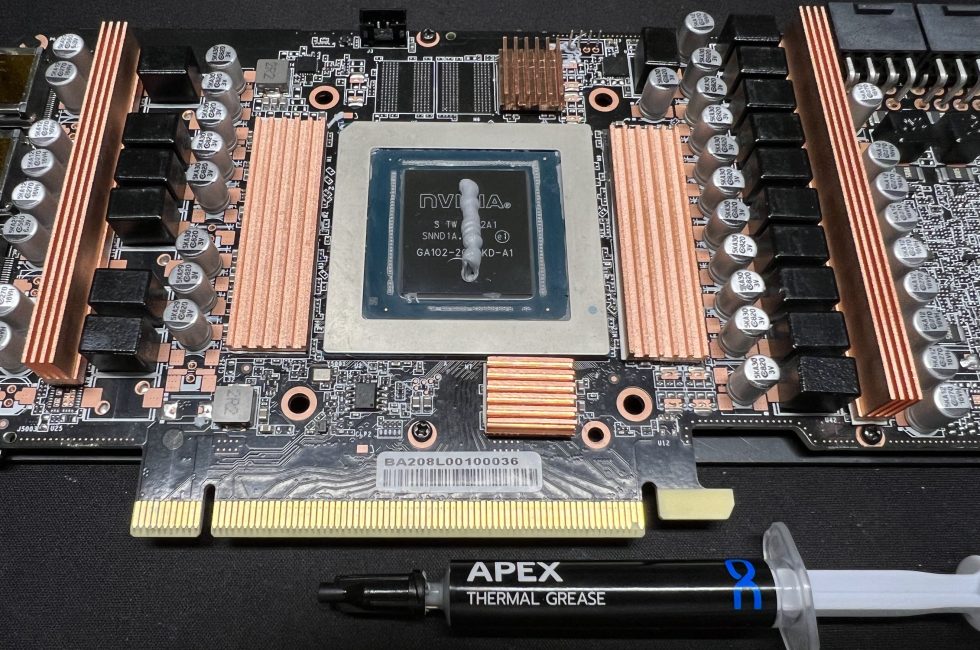 Let’s put it this way: Pastes like Arctic MX-4 can definitely be taken as a model, because they are easy to handle and have shown consistent quality for years. The thermal conductivity is of secondary importance, because if I can get the layer even half as thick as with a very viscous paste, then I have halved my thermal resistance or even doubled the thermal conductivity. So that you don’t have to go through the annoying intermediate step of heating viscous pastes (heat bath or simply your pants pocket), you just look for the fluffier product.

With the Apex, this was such a sticking point and you should be able to get really thin layers with this paste. In the picture above, we see the giant sausage on a GeForce RTX 3080, which could be flattened by screwing the cooler alone so that a really wafer-thin layer was created on the very humpy chip in the center and enough paste remained on the edges with the nasty gaps to do its job well. It also does not run away and does not harden completely right away, hit and also reward of countless tests. By the way, this also works with AMD (picture below).

It would be inappropriate to call it a miracle paste right now, but it is something that can be used quite easily and safely in practice. I will read the tests of my colleagues with interest and stay out of it for the most part. Conflicts of interest are not my thing and a second or third opinion can never hurt.

Everything was better in the past? Search & Find with long forgotten treasures
NVIDIA AD102, AD103 and AD104 – Estimated development and production schedule and why there is no real information about the new GeForce yet