Anyone who has followed igorsLAB closely over the last few months will certainly have noticed the heat conductive pads on which I have been weakening for a long time. At the latest since Nvidia’s memory fiasco with the RTX 2080 Ti, the more or less funny Space Invaders and the explanation search, we now also know what we can do to prevent the memory modules from cracking or before coolers that are too much pressurized from causing any more damage.

Well, Alphacool didn’t reinvent this pad, of course, and many manufacturers of cooling components have been swearing by these ultra-soft pads for years (as has Nvidia as a graphics card manufacturer). In the end it is actually rather pressed heat conducting paste, which is interspersed with wafer-thin textile fibres inside, so that the shape can be kept. This combination avoids the “bleeding” of silicone oil from the well-known soft pads, which not only looks disgusting, but is also harmful for the durability. 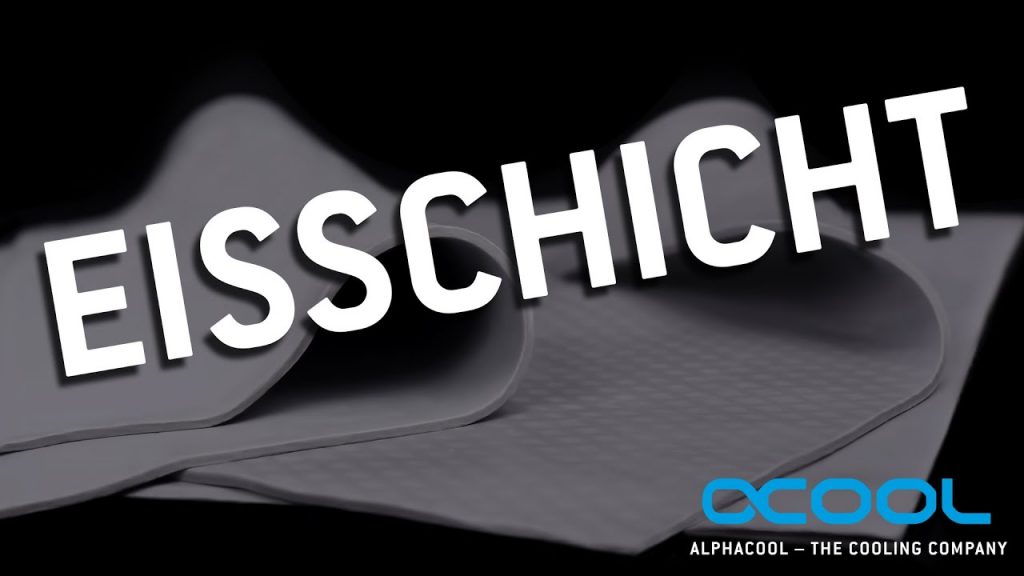 The crown of thermal conductivity will of course not be reached with the (for the end customer) new pads, this is technologically (and also price-wise) not so easily feasible. But you really need much more than 3 W/m*K, if these parameters prove to be only one of many in practice? When Alphacool was asked, they said that they were planning even more conductive pads and lots of other innovative products, but at the moment there is little more to learn. Who wants to look into the cards?

Alphacool has taken a clever path, which of course makes the already expensive purchase much easier. By also making one’s own products, such as water blocks, happy with this, one achieves purchase quantities that one will hardly achieve as a pure end customer salesman. Only then can this material be purchased in such a way that the end customer can profit from it in the accessories trade. Because precisely these pads are already quite expensive to buy. And the fact that companies like MSI prefer to stick half pads on the memory instead of using these paste pads is simply due to the fact that not every controller can give the father Theresa. Good, but not cheap either. 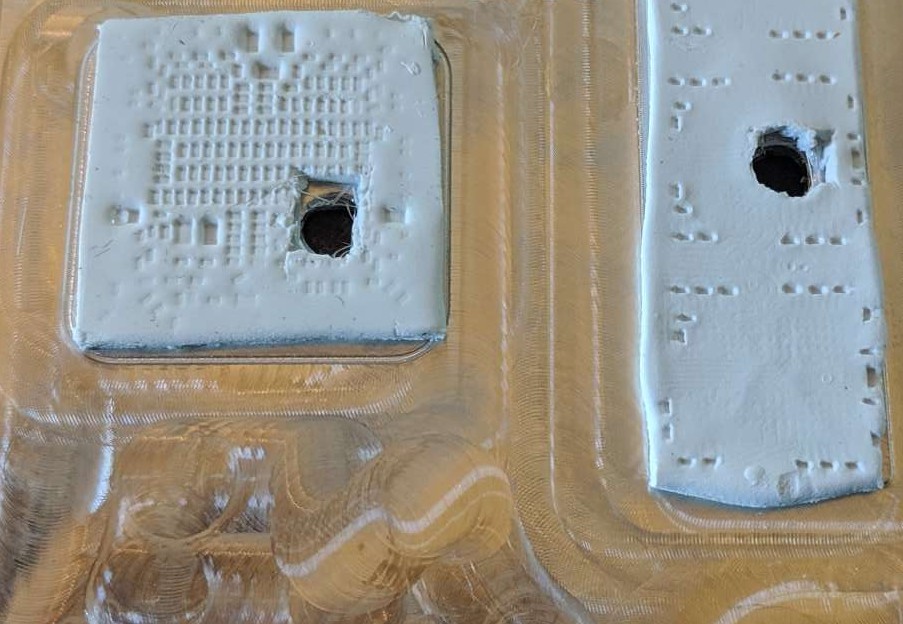 How it works – memory modules and flat pads

Alphacool starts with two material thicknesses, also for purchasing reasons. The flatter 0.5 mm pads are also the reasonable lower limit of the minimum layer thickness that makes sense, also technologically in production. Let’s take a look at the initial situation. Very conductive pads are usually not soft enough to be pressed into all gaps. Technological manufacturing tolerances also ensure that these pads are often not soft enough, even under pressure, to screw the cooler plate, for example, as intended, so that unwanted distances can occur here.

This, in turn, can have a negative effect on areas such as the GPU, whose thermal paste layer then becomes too thick. Or it fits with a lot of pressure at the end, but then you have exactly this unnecessary pressure on the components, which can be very dangerous due to their soldering (reflow, balls, distances to the board, see Nvidia). 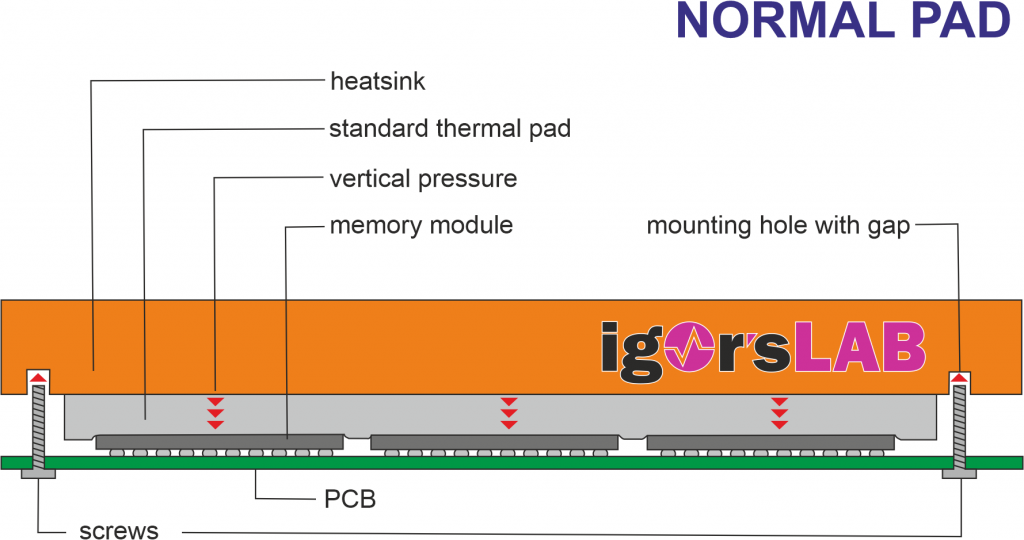 Especially the problems with the pressure on the components can be handled quite easily. And you also gain additional cooling surface in the filled gaps. This stuff is not called Gap Filler for nothing. 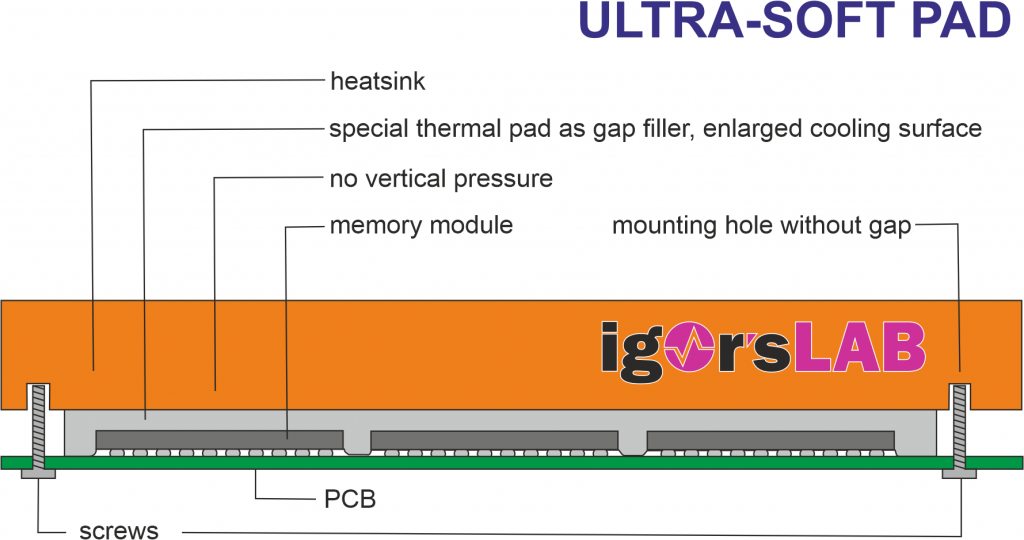 How it works – larger distances and thicker pads

And now we come to the thicker 1 mm pad. Besides the story with the pressure only one thing counts here: surface, surface and again surface. Let’s take a look at the scheme again: The surface of a MOSFET is very limited and you will only be able to cool hotspots at the end with conventional pads. The rest of the hot board including the gaps and other (passive) components remains uncooled. 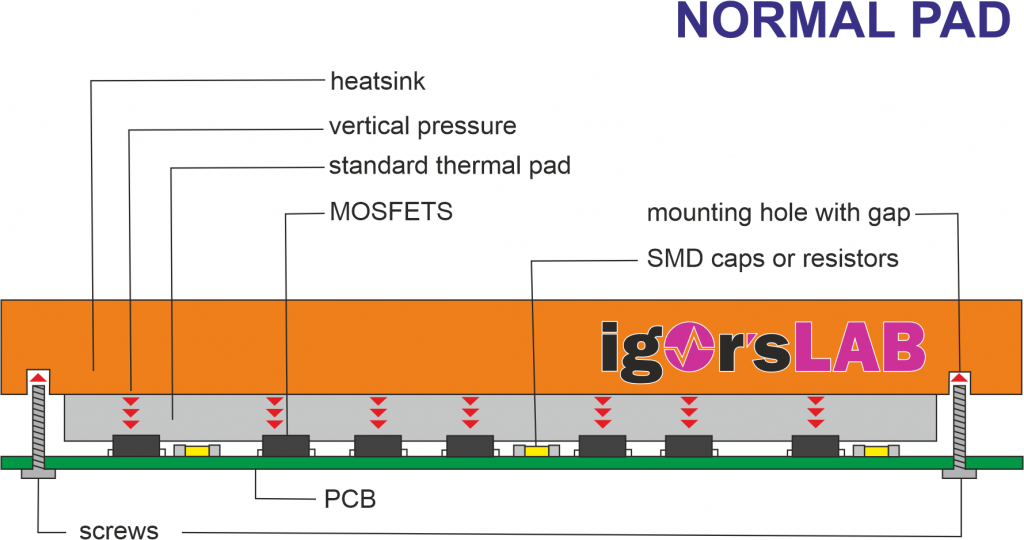 If these soft plasticine pads are used again now, the gaps fill up and even the upper side of the circuit board including the lower components are integrated into the cooling process. With a little luck and consideration you can significantly increase the cooling area and also reduce the pressure on the components to zero. Also the distances to the circuit board can be realized as required and it will not bend or warp in the long run. 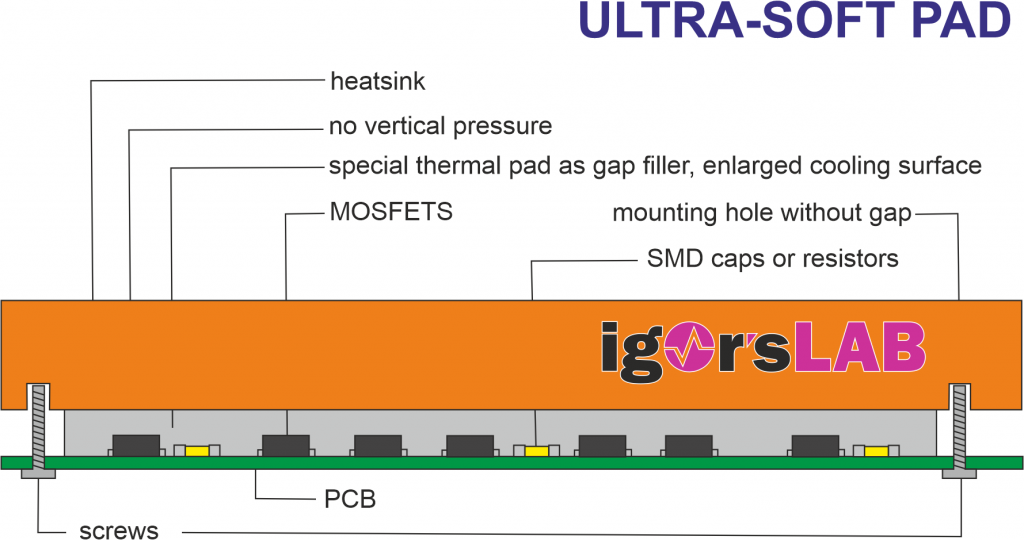 I was also interested in the issue with the MSI RTX 5700 Evoke (and not only this one) together with the half thermal pads and so I tried the ultra-soft pads on this one as well. The starting point with the different heights of the cooling surfaces was clear (and annoying):

It’s no secret that these pads are already included from time to time with individual products from different manufacturers. For example, Bitspower has already used these types of pads to be on the safe side with the GeForce RTX, for example. But there was never anything to get in the end customer market. Industry meets end customer now! and it’s a substantial gain. And I’m happy that finally one of the companies I chewed off their ears for these pads finally acted.

Alphacool launches these pads as 10 cm x 10 cm pieces as Eisdecke with two thicknesses (0.5 and 1 mm) and a thermal conductivity of 3 W/m*K for the time being. Higher thicknesses and thermal conductivities will certainly follow if the customer accepts the product. On the end, the thermal conductivity alone is not important, because with clever use you can even achieve a lower thermal resistance in the total system than with only punctiform high performance pads. You really have to see it in context, otherwise you end up as a marketing victim. That’s like with the super thermal pastes, but we had that recently.

For the TV-junkies among the readers: Here is the video with a new, animated bot and my new, green-room-friendly table-chair combination:

Radeon RX 5700XT, Radeon VII and RX Vega do not offer direct support for Resizeable-BAR, but it could be done | Backgrounds

AMD Ryzen 9 3950X and 3900X in workstation test against Intel's Skylake X, Coffee Lake and of course yourself in 65-watt eco mode
Toshiba RC500 in review – What is the cheap 500 GB SSD really good for and is the SLC cache sufficient?