The Katana ("Shinken") as a Japanese longsword, like the soundbar, is definitely not a double-edged thing. And if one were to look at the soundbar without the subwoofer in front of his spiritual eye, then the slender, elongated part would be simmering. Measurements with different settings Let's get back to the presets and the resulting sound, as well as our slight discomfort with the delivery state. The bathtub that opens up here is not only a bend a small eighth...

The Katana ("Shinken") as a Japanese longsword, like the soundbar, is definitely not a double-edged thing. And if one were to look at the soundbar without the subwoofer in front of his spiritual eye, then the slender, elongated part would leave a little room for corresponding associations. The 299 Euro EIA is, of course, a stiff Max at first, but perhaps the equivalent is right? Then we could certainly represent it. Which brings us to search for traces and simply test the good piece. 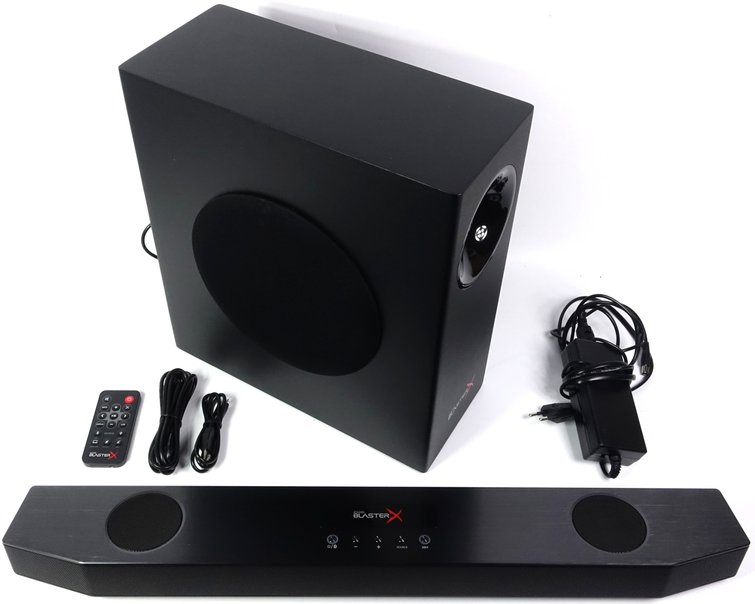 We have already tested it extensively in practice. Today, therefore, only the verbal summary of our user experience and of course the corresponding measurements are added. Including subjective evaluation, of course. So let's tackle it, or from. When it comes to the scope of delivery, we do not expect any secrets. Soundbar, subwoofer, plug-in power supply, two connection cables (including USB connection cable on type A) and the inevitable check card remote control – all as needed and had.

The approx. 1.5 kilos of soundbar is approx. 60 cm long, as well as 6 cm high, almost 8 cm deep and thus fits visually to (and below) almost all monitors with 27" screen diagonal or more. With smaller, individually positioned visual devices, however, it would look rather silly. Two feet, which unfortunately show in practice that they are far too small, should be able to place the soundbar above the monitor foot. Well, we always had two neutral-looking, self-cut black foam rubber squids with us. First, this lifts the soundbar safely over any thick monitor foot, and it also decouples the soundbar from the desk. 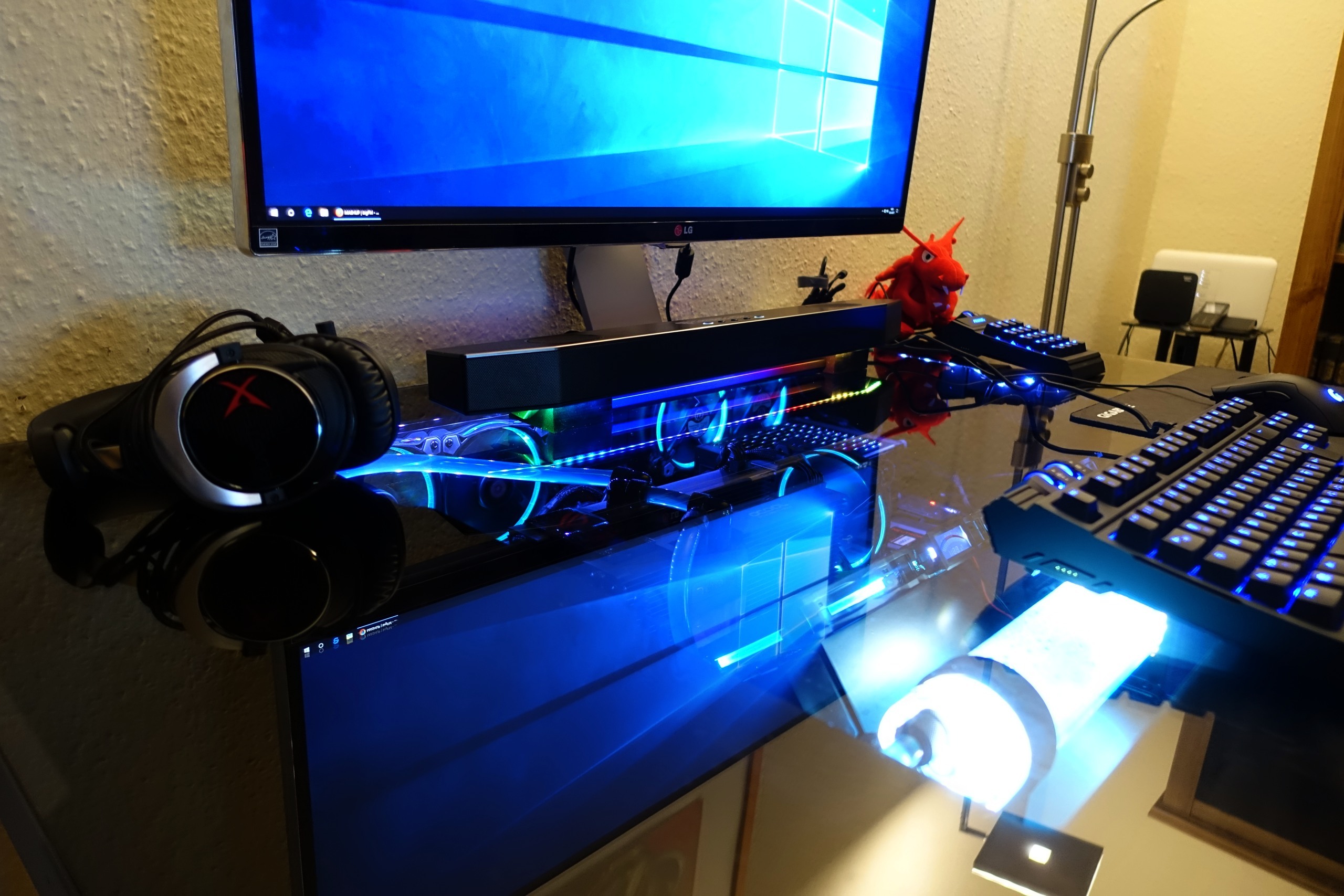 On the other hand, the surface is pleasantly cool in brushed aluminium and dark painted perforated metal, at least as long as it is the front-m top and the two side parts. Down and down the katana is raven-black and boring. But no one is looking at that. If you stand on fairy lights and colorful Christmas trees, the LED-Aur(or)a of the Soundbar will certainly bring some nice moments of existence. But at some point it was just too much for us, which is something to be called.

The with its 13 cm rather narrow, 29.9 cm deep and 33.3 cm high, made of foiled MDF-existing subwoofer-body with the side-positioned 13 cm-driver and the frontal mounted bass reflex opening, looks more powerful than it is acoustic and weighs with its approx. 4 kilos also not the world. But we'll get there right away. Visually and haptically, the low-key box is rather mediocre, but even this can have advantages if nothing flashes and lights up. But back to the actual technology and the transducers, because you can't hear light.

Creative specifies an output power of 75 watts (RMS), which of course falls within the realm of marketing-compatible dimension and fun units. We measure a primary power consumption of approx. 37 to 45 watts, which would require the miraculous propagation to reach the 75 watts. Don't do them, though. The pure sine power should be at approx. 30 to 35 watts, with approx. 20 watts are likely to be accounted for by the subwoofer. Of course, this sounds much less in bare numbers, but it is still loud enough to start a petty war with disliked neighbours.

The exploded drawing shows the schematic structure of the soundbar. For the midrange range from approx. 125-150 Hz each uses a driver with a good 6 cm diameter at the top, for the high tone a 3.4 cm driver per channel is available in the angled corners of the front. The complete board with amplifier, DSP, DAC, control unit and the LED display for the operating modes, which is located behind the hole grid and can only be read able with a lot of goodwill, is placed in the middle. Function follows form has never been a good idea, but better to do the classical way the other way around. 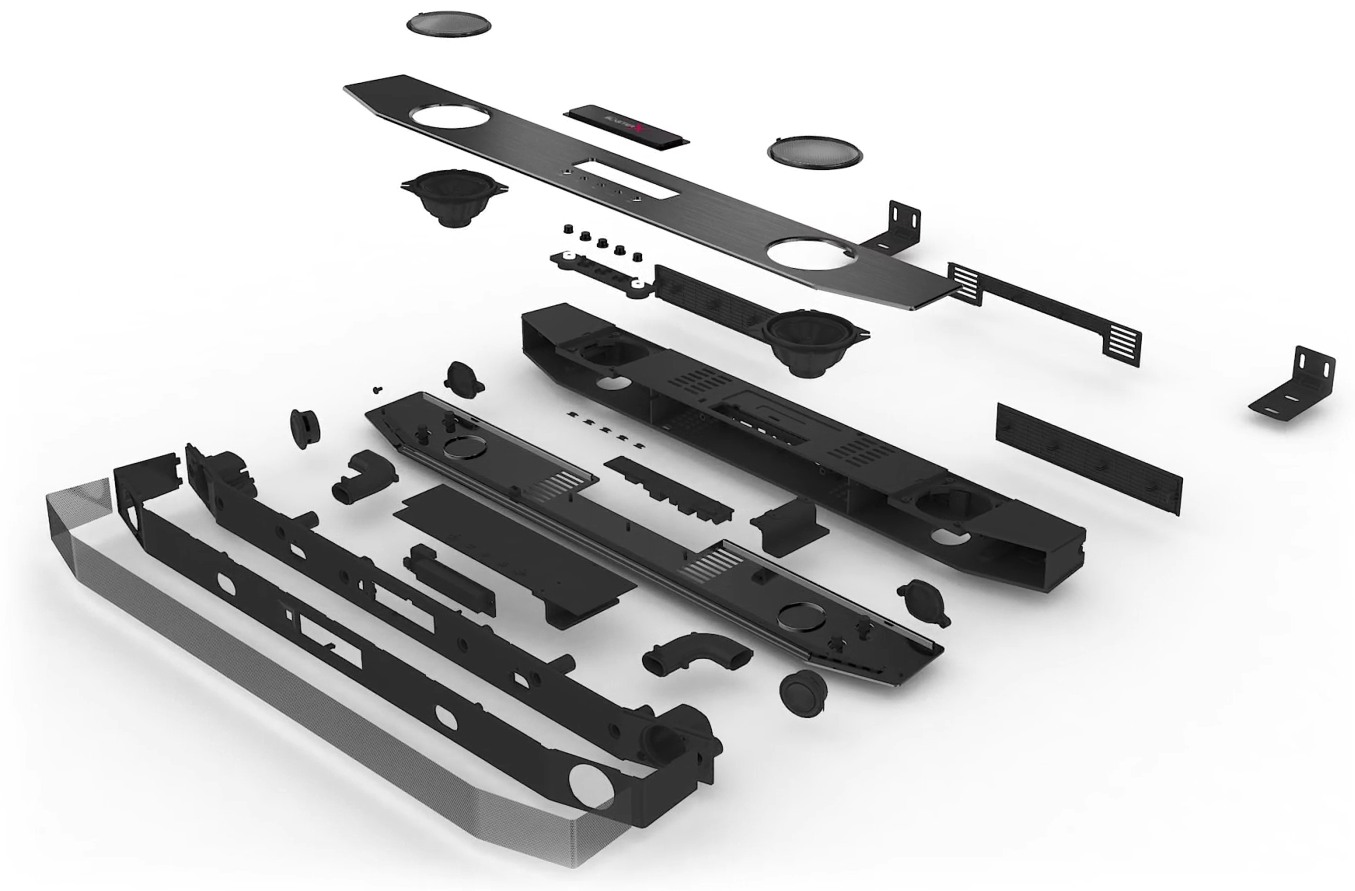 In addition to the invisible input with Bluetooth 4.2 (A2DP, AVRCP, NFC), whose use is quite easy due to manual pairing or NFC, you can still find the usual audio input on the back. The 3.5 mm jack input is standard and sensitive enough. There is also an optical input, as well as a mini USB jack for connecting to the PC. The Type-A USB jack is used to optionally connect a storage medium (USB flash drive) for which a simple media player is available.

You could also connect a headset, even with a separate microphone input, making the soundbar even a hands-free device if you could ever reach the fumbling connector on the back. What the developers have done to place the connector in the sinking, on the other hand, can only be guessed.

The operation and range switching are simple and also intuitive to use, but the sound control is not really. What is concreted to the customer's ears as standard ex works is at best mainstream and sound at the typical Kevin Klaus level. Bass bumbum and hissing clap, so much swinging pelvic work and dull groans, instead of a delicate sound triptease. But it comes close to help in the form of free sound selection without a 5% hurdle – always assuming you sit at the PC. But real console ros and couch potatos are used to suffering anyway, so that fits with the different groups of voters.

On the PC, the acoustic open-air season can be opened with the downloadable software (and after a necessary firmware update). Asians have never had it so thick with good presets, so we just leave the presets of Messrs Li and Lu to the left and assemble something right ourselves. This small extra effort will also be worthwhile, that is already spoiled in advance. Both subjectively, with the following description of our acoustic sensitivities, as well as the bare measuring curves, which we have trimmed to a delicious standard measure with the sliders of peanut butter and super-curvy. Well, it doesn't become analytical yet, but you already increase the feeling of life tremendously.

Finally, we simply make out the light and raise the curtain to the stage. After all, we are now listening!