WITH the Radeon RX 580 Phantom Gaming X, ASRock presents a first-time work in which you can actually do nothing wrong with these models, bearing in mind the long-standing experience of the competitors with these models. So it’s kind of the ideal test object to practice. After all, the GPU is not a real new development, but only the continuation of what AMD started with “Ellesmere” and Polaris 10 two years ago.

Since our launch article “AMD Radeon RX 480 in Test: Can Polaris Counter Against Pascal?” already contains all the important theoretical foundations and deeper information about the architecture, we simply give ourselves the long-breathed repetition of the theory and dedicate ourselves to the new publication.

With a weight of only 598 grams, this card is almost a flyweight, which suggests a rather restrained lysized cooler. The map is also rather mediocre in size. It has a mounting length of 26.7 cm (outer surface slot panel until the end of the radiator cover), making it an average length yread. With a height of 10.5 cm (from the top of the motherboard slot to the top of the radiator cover, it is also relatively low, and the installation depth of 3.5 cm is exactly where you would expect for a dual slot card.

The two fans with a rotor blade diameter of 8.5 cm each sit in an opening with a diameter of 8.7 cm. A total of 9 rotor blades per fan, with their special shape, provide above all a strong throughput and less for turbulence; they produce a little more static pressure. Whether and how loud the whole thing will then, we will see in a while.

ASRock dispenses with a backplate, which even makes sense from a financial point of view at the usual prices from 1 to 2 USD including additional installation costs. Because it doesn’t really have to stabilize anything, but the cooler on the other side is too light.

It is already clear at the bottom of the card that ASRock also relies on the horizontally arranged slats for the AMD cards. The advantage is that the heated exhaust air is not pressed against the sidewall and motherboard, but can sometimes even be transported directly from the housing.

The top also clearly shows that ASRock follows its competitors in terms of form and design. In addition, the single 8-pin power supply connector is positioned at the end of the board, which has been rotated by 180°. On the other hand, there is no need for an illuminated LED lettering. The heat sink shows not conspicuous except for the ends of the two 6 mm and an 8 mm heatpipes.

The open end of the card is used for exhaust air outlet, and the cooler is also a whole lot higher, as the board is much shorter. 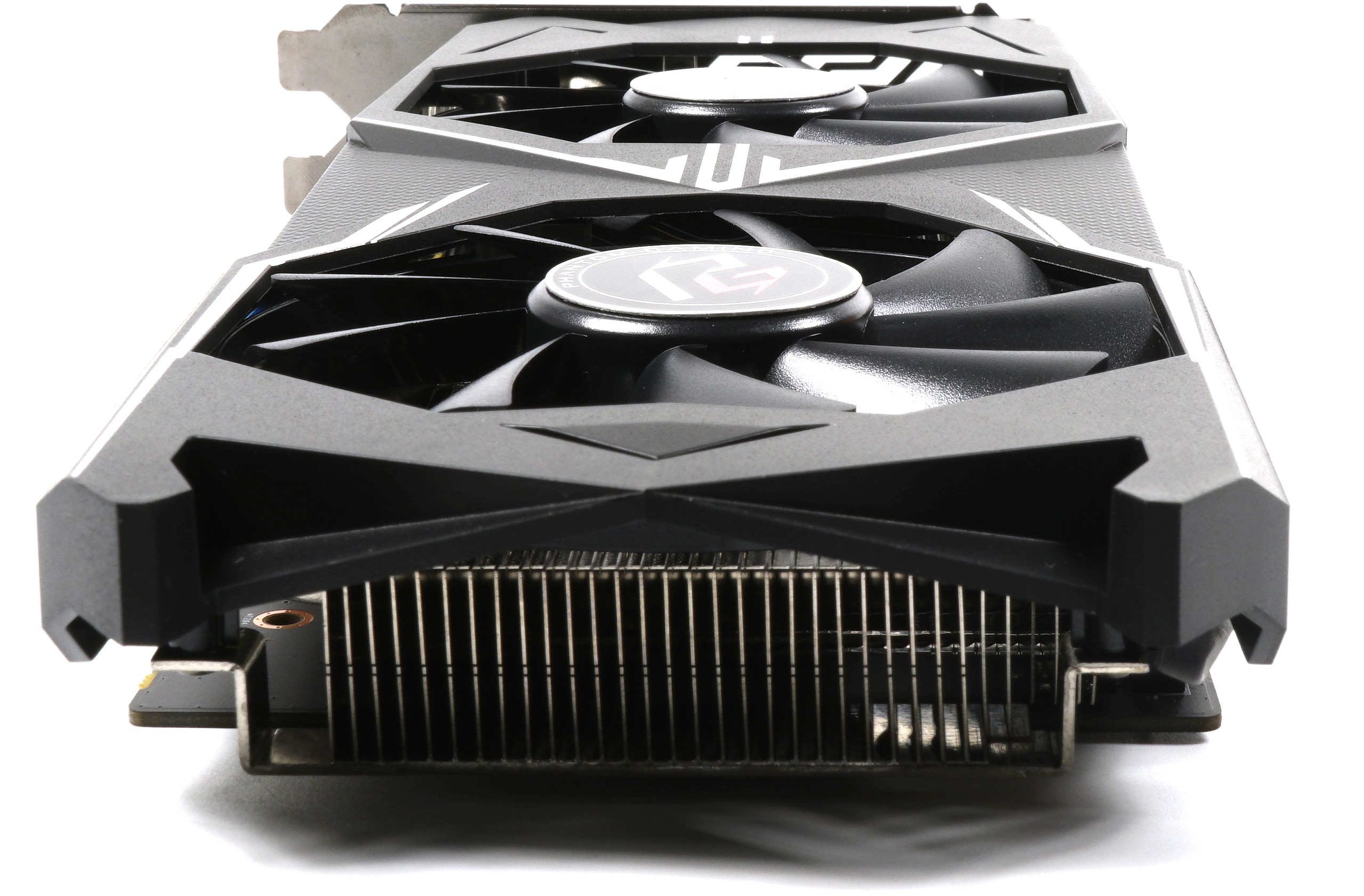 The slot panel has five ports. A single HDMI 2.0 port and three DisplayPorts 1.4 are available to the user. The DVI-D connector is a logical addition, which is mainly aimed at up-and-comers with older monitors. However, since the slot visor is also used for air outlet, its presence is rather counterproductive from a cooling point of view. 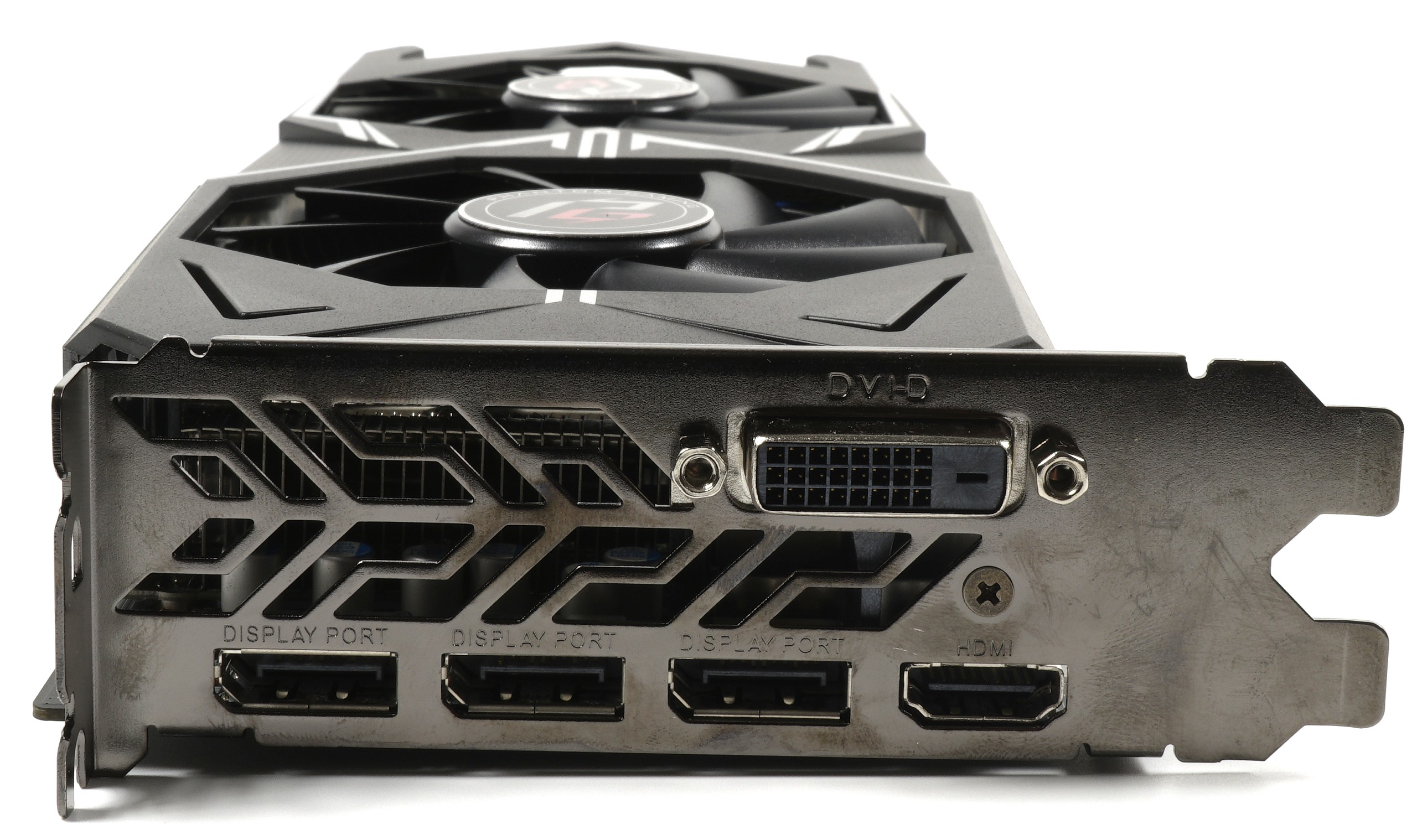 Finally, let’s take a first look at the purely technical data. The value displayed as a maximum clock, on the other hand, is rather a wishful thinking, which is unlikely or impossible to achieve within the set power and temperature limit. But let us be surprised.

Compared to the relevant (reference cards), this looks like this:

The new test system and the methodology have already been described in great detail in the basic article “How We Test Graphics Cards” (English: “How We Test Graphics Cards”) and therefore, for the sake of simplicity, we now only refer to this detailed Description. So if you want to read everything again, you are welcome to do so. However, we have again improved CPU and cooling to largely exclude possible CPU bottlenecks for this fast card.