Microsoft's Xbox Elite Wireless Controller is a luxury appetizer that costs a whopping 149 euros and is said to be the best controller in the world, according to the manufacturer. But what added value besides optics does one really get in daily use and how durable is the part actually? These are exactly the questions I want to investigate, because I write from my own experience...

Once in a lifetime you have to treat yourself to something and if you play with the pad more often, you are also granted a certain luxury. Microsoft's Xbox Elite Wireless Controller is such a luxury appetizer that costs a whopping 149 euros and is said to be the best controller in the world, according to the manufacturer. But what added value besides optics does one really get in daily use and how durable is the part actually? It is precisely these questions that I want to investigate, because I write from my own experience.

To anticipate, it is already the second controller. The first one I had to change after two months, because the shoulder buttons didn't want any more. But even this copy is not free of defects, that is what I want and must put before me. But there is an extra section for the details, I don't want to prejudge that yet. 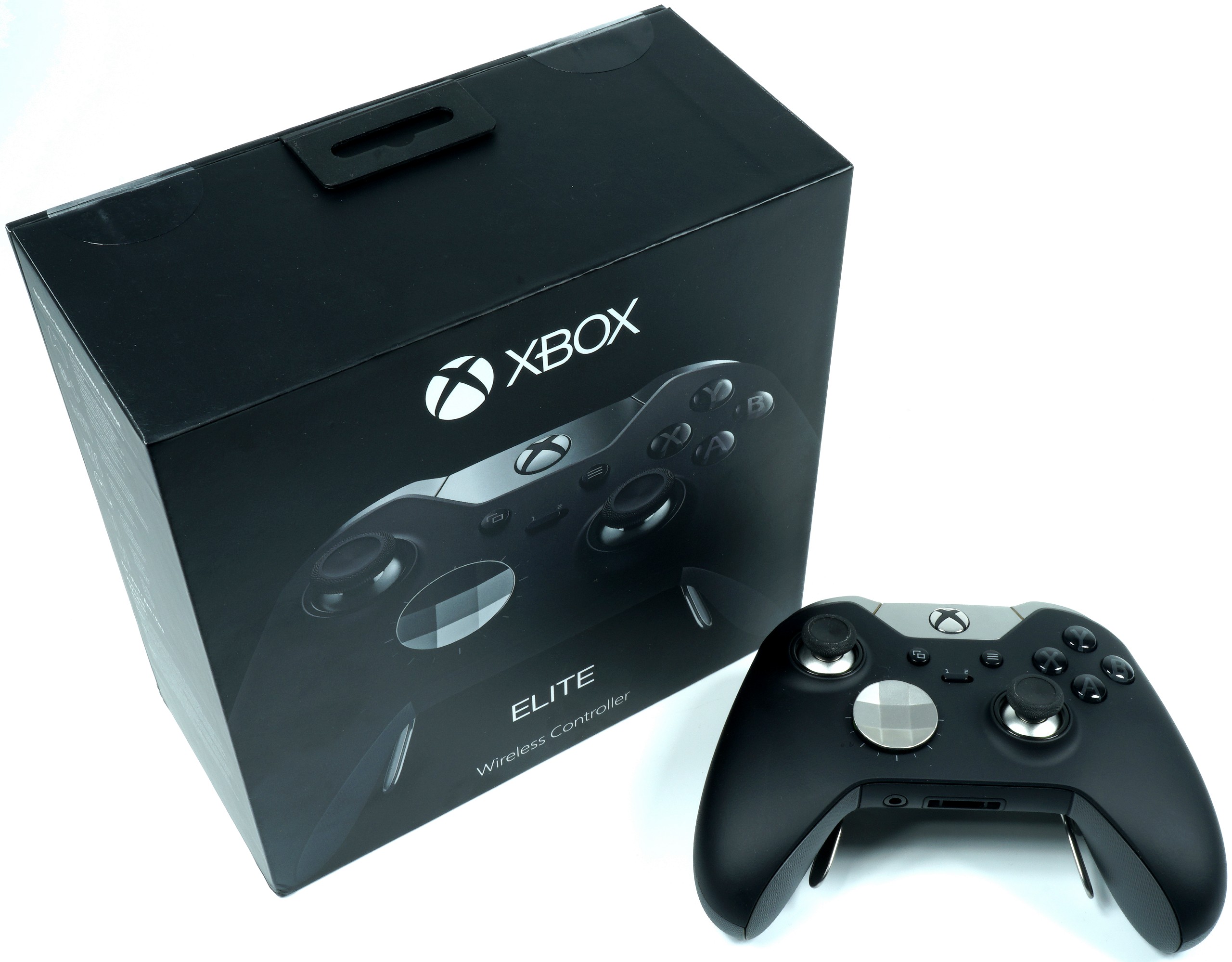 You get the controller, two alkaline batteries, a hard case to store the pad including the whole paddle and changeable thumb sticks, which I will discuss in a while. This creates order and protects the optional small parts from loss in the often unfathomable expanses of one's own home. The USB cable for connecting the controller directly or charging batteries is unfortunately not Type C, so this outdated and unwieldy micro-USB jack is more of a set break point.

In addition, there are also quick start guides free of charge on the house, including instructions on where to download the (further and optional) configuration software. However, a proper German manual that really explains everything is not even available at an extra cost. The German help page of Microsoft is also not really complete, because if you ask detailed questions, you end up on the English-language page. This is amply unloving and not appropriate for a premium product in this form.

The surcharge list for other accessories is also happig. For example, the wireless dongle for the PC costs almost 20 euros and the battery kit is available for the same price. If you buy everything in the Microsoft store, you quickly get to just under 190 euros. The two hundred then made a later required bottle of "Super Glue" full with me, about which I will write. Premium prices do not necessarily guarantee premium quality.

This controller weighs almost 350 grams and you should already have well-trained hands and forearms if you want to keep the part for a long time without any support. For this, the controller is visually a real cream slice. The body consists of matt black plastic shells rubberized at the bottom. This creates a better hold, which I can only confirm. The bumper and trigger buttons are made of plastic, but visually benefit from their metal look. Otherwise, the picture gallery is almost self-explanatory:

The adjustment in length and shape of the thumb sticks is easy, because you get three different sets of metal, one of which is guaranteed to be THE best personal choice. Inserting these thumb sticks is easy, because magnetic clips do this in a smart way. At the control cross you have a kind of shell assembled ex works, but you can also use the classic control cross, which is also included.

If you turn the Xbox Elite Wireless Controller over once, you'll see two slide switches that can almost halve the hub of the shoulder buttons. However, you should also use the trigger effect if necessary. and re-adjust it. For example, if you When racing, the gear shift, clutch and handbrake smarter, without blocking the normal buttons with it, can mount up to four paddles to give the middle and ring fingers a task. The four paddles (two long and two short) are also magnetically attached – a breeze.

The following promotional video of the manufacturer then explains the rest:

Normally, you need either two batteries or better a rechargeable battery for wireless operation. If you want to play wired on the PC, you can also be happy with the USB cable if necessary, without having to pay for the financially hefty battery special power.

With the Xbox One it goes automatically, with the PC you have to jump into your pocket again and pay for the wireless luxury first. For this, you get a dongle for the almost 20 euros, which understands itself with Windows 10. and a kind of extension cable if the PC is unfavorable. Then the dongle can also be placed in a radio-technical way so that the connection remains secure and, above all, low in latency. If the positioning is rather suboptimal (e.g. at the back of the PC), dropouts can significantly tarnish the fun of the game.

I made the direct comparison with the normal Xbox One controller (USB), the Nvidia Shield controller (USB, a bit tricky), an older Saitek controller (USB, 13 years old!), the expensive Hermes P2 RGB and a low-priced China controller. While the older Shield controller is at least still haptically convincing, all other controllers are significantly worse in terms of handling, configurability and haptics. The analog switches are perfectly dosable and very clean to use.

In general, all buttons have been provided with a very pronounced tactile feedback, which also sounds like it plays. In addition to the standard buttons and the very exact thumb sticks, it is above all the four paddles at the bottom that give you a certain advantage. At least when you get used to it.

Which would have brought us to durability. I initially had problems with one of the shoulder buttons in the first model well over a year ago. I probably wasn't alone, because the support changed the controller without discussion with the remark that it should no longer occur now. Microsoft should be right about this, because after more than a year of intensive use, all the switches are still fresh as on the first day.

Rubber, on the other hand, is such a thing in itself. After almost 7 months, first the left side and then the right side of the rubberization dissolved slightly and then almost completely. Once again, the weeks-long wait for support and UPS? With some brutally well sticking "Super Glue" I have brought both rubber singerations perfectly into shape again, however, the handling with the extreme adhesive is not without problems. And the stuff is expensive on top of that.

It's the best controller I've ever had and currently have. Self-purchased and not sponsored. Upgraded with battery pack and wireless dongle, the controller still does a mega-good job. Despite the teething problems with the first buttons and the involuntary second rubberization, I don't want to miss the part any more. The Microsoft Xbox Elite Wireless Controller is an optically, tactile and functionally perfectly designed piece of gaming periphery that looks at the long time, also offers enough value for every euro used.

Which brings us to the price. If I paid 149 euros at that time, it is worth looking at the price comparison. In the meantime, the black version can even be obtained from approx. 100 euros. However, since you then have to process the warranty services directly through the dealer and not Microsoft, you should not save in the wrong place. Because my test also shows that you might need the support, even if the manufacturer assures high and holy that you have also solved the rubberization problem.

Well, I still have enough glue left, but he should also hold.  Otherwise, the conclusion remains that the investment was definitely worth it. Buy? Why not?