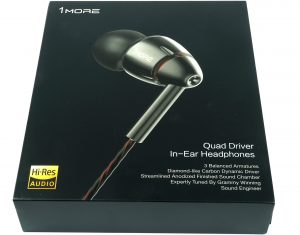 I honestly admit it, because I didn't want to test the Quad Driver from 1More (model E1010) out of misunderstood objectivity. Because I have had a rather divided relationship with In-Ears for years, which could not really rip me off the stool either ton or ergonomically. Even though we as a family have so many privately owned in-ears, including reference and top-class models such as the Bose QuietComfort 20, Bowers & Wilkins C5 and the Westone W30 – I was not entirely satisfied with the sound or the long-term comfort, because anything always bothered.

Since I have used In-Ears mostly on the go and also use sporadically, it is for me rather not so much the audiophile playground, which has to be mowing acoustically, but the adventure playground for the real fun in between. It doesn't necessarily have to sound neutral, but can also come a bit padded up as a bathtub plagiarism and also like to be a bit dirtier. Acoustically seen. And that's exactly where the Quad Drivers from 1More surprised me a little bit. And in a positive sense, although not the same. But this is already a story of its own, which still exists.

First of all, I want to write a little bit about the hybrid drivers, because somehow you have to squeeze four transducers into such a little one. Of course, it is only a dynamic converter, which is allowed to recite the low tone to the lower middles. The rest consists of plugged-in modules for the upper middles, the tweeter and the super high tone. If the Firlefanz with the Hi-Res-Audio-Certificate had been omitted, three drivers would have been enough. But the Triple Driver already exists. And that's from 1More. Aha.

So two two so-called Balanced drivers are now working as with the Triple up to approx. 20 kHz, which should be enough for most people anyway. The fourth driver is then intended for frequencies up to 40 kHz and it should provide more crispyness, even if only bats can perceive this. This, in my view, is hardly comprehensible and rather a fluffy knitted urban legend. But this fulfils the requirements for the certificate. Look! 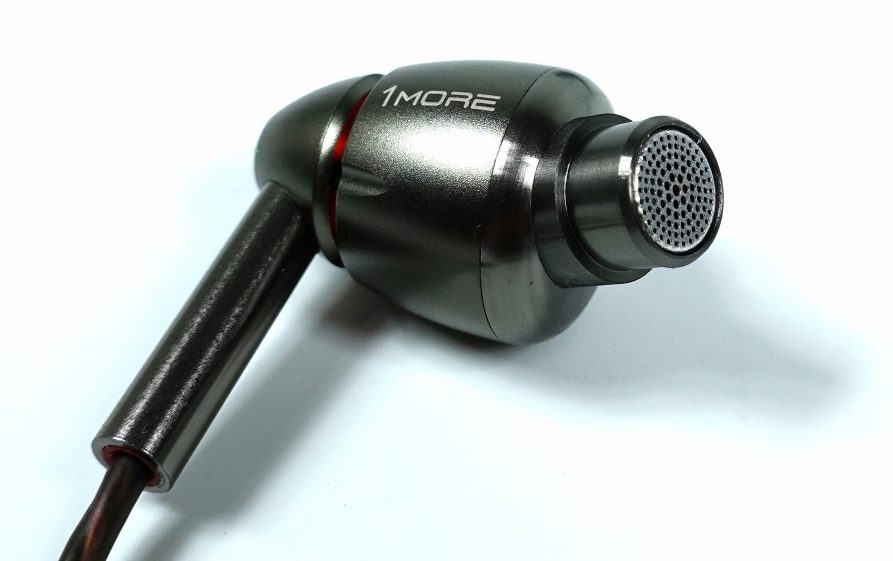 Speaking of certificate – thX is also allowed to decorate the product. Let's stop the lecture at this point with all the advance laurels, because at that time I was still very skeptical whether this will ever be a love affair. For this I already saw too many maketing bubbles burst and in the end nothing remained except a damp spot. In the figurative sense, of course.

Scope of delivery and equipment

If you consider that you get the product in places for 120 euros, the scope of delivery including the packaging is amazing. In addition to a magnetically lockable box, in addition to the actual in-ears, which have already been equipped with a silicone pad, eight other tips with different diameters and different designs are available. And that's why I found out for the first time in a long time when it comes to Igor-compatible upholstery.

Together with the turbine shape (I pinched the hair dryer), the parts even sit really pleasantly. And that is exactly why they will accompany me for the first time on the long haul in two weeks and secure it with clip and aircraft adapter in case of fall. The leather case is extremely stable and even treadproof (involuntarily tested). If the rest is right now, I could be quite mild-mannered. But the acoustic first impression was acoustically anything but plump at first.

Import? No voodoo, but duty!

When you unpack the parts, join them and think that you can indulge in the music undisturbed, because you are either deaf or naive. Or both. The slightly too present bass sounded muddy, uncontoured and just for shaking your head. Was it already? For with every neat drum it pushed the middles in a nasty wave in front of it, as if it were necessary to carry small ducks under the ice. Deadly for any music style, unfortunately. That's why I connected the Quad Driver to the FiiO X1 and the player to a potent power bank and let the total playlist hammer through a whopping 56 hours.

Even though I think of most devices as voodoo, this time invested in this with the Quad Driver is a maximum win! The bass gets much blacker, more structured and above all a bit more textured. Well, it's not quite precise, but almost. Then the bathtub does not bother, which pushes the bass a little forward, because it lets everything live from the upper bass in peaceful coexistence. If you really want to do justice to the Quad Driver, whether you're a buyer or a reviewer, you'll have to take that time. The mouse does not bite off a thread. You really should use a wide-ranging but bass-heavy playlist and drive as full control as possible. Then it fits.

Oh, the parts are so nicely cool. Aluminium stop, because plastic has been almost completely dispensed with with the body. This is visually a pleasure, haptic anyway. And then it should be durable. I wrote something about the ear tips at the beginning, but the selection is really almost unique, so you can also repeat it. Switching is quite easy and so you can spend a lot of time trying out the really optimal pair.

The 1.25 metre long cables do not make a bad impression and the Kevlar insert also created a little confidence. Unfortunately, the designs are quite airy and you can't see how the cable could be protected against buckling or ripping out. The cables cannot be removed. But since I wrap everything over my hand when i put it together and stow away from the house, less is likely to happen. So let's see what time entails. By the way, the plug has a protection against nodding off. And it is even angled by 90°, which certainly does not make it difficult to operate on mobile devices close to the floor, on the contrary.

The control unit is intuitive to use and the three usual buttons (volume, next title and call answering) are functionally connected to both iPhone and Android. The microphone is well hidden, doesn't even sound bad, but suffers a little from the body sound influence that the slightly rigid supply lines exert whenever they bump or scrape at the shirt. I couldn't see a low-cut. The sound is not very crispy, but tolerablely loud and somewhat overemphasized in the upper middle, which is not detrimental to the comprehensibility when making a phone call.

The weight of just under 19 grams and the good upholstery ensure an almost perfect wearing comfort. Then you can see mildly over the cables that are a little too rigid. These in turn give at least a certain feeling of durability. At least something.

Right now it's going to be funny, because I can't measure anything this time, because the equipment is not suitable for in-ears. But what I can do is the subjective ear report of what I heard, which is also interesting. By the way, the settling time is, subjectively felt, really good, the resonation hardly perceptible. At least it doesn't bother. It's a pity that I can't prove it this time with the decay diagrams, but you can find what I heard really good. At least in the well-rehearsed state.

The bass goes deep, really deep. Even if the tuning down seems a bit pretentious – the bass always gives the superstructure from the upper bass to the top of the tower enough air to breathe. Especially in classical music, when besides the organ other low-level players are at work together and loudly, something goes lost the texture and many things mix into a deep-tone uniform bulwark. However, this is whining at a very high level, because even the three times as expensive Westone W30 are not really better, the Bose is even much worse.

The upper bass is present, but not too dominant and the lower middles still sound warm and full. This allows you to achieve an almost homely chimney ambience without distributing sugar-sweet sound jam. Analytically, it's completely different and that's a good thing. The middles and upper middles are balanced and almost boringly clean, only the high tone then gets a little more momentum. From approx. 7 KHz it gets almost dirty, but without appearing metallic or scratching. You can almost compare this to the sound of Klipsch horns. Presence without impertinence, fits.

The whole thing works across genres in an impressive consistency and even gaming doesn't have to remain a separate event. Sound sources can be separated very well from the lower middle to the very top, also in heaped form and at high to very high levels. The stage is impressive and the spatial image is even better than the Westone W30 and is almost a parallel universe in front of the Bowers & Wilkins C5, which have disappointed me more and more, although they also cost much more. In direct comparison, The In-Ears of Bose are nothing more than mere commodities against flaming fellow fliers and do not stand up to any comparison in tone.

What I heard is therefore a nice continuation of the category optics and haptics, which made me realize that one should often rethink about one's own preferences and prejudices without emotion. You know, playing with your own shadow and jumping.

So you can also be wrong, So I have to be honest in the summary. Even if the Quad Drivers are not audiophile sound bodies for the red wine-simmering leather armchair stool and also play far away from professoral instruction – they are real fun listeners that leave little to be desired, because they convey so honestly exactly what you are if one does not want to doze in front of one's thoughts. Loud? Goes really well. Precisely deep and structured? Also goes quite well, especially in the very warm middles. Fun by the fireplace and you can hear the wood crackling there before the tree has even been felled.

Then you can also leave out the red wine, strip over a rolli and drink something more hearty. And of course listen, because the Quad Drivers actually like every genre. Haptically they are fine, visually it is also possible. And the scope of delivery is a nice entry in maxi format. There is not much to criticise. Except for the long playing time and the unclear fastened cables. The weight is just fine, but the cushions in variety and seat loosely rip them out again. 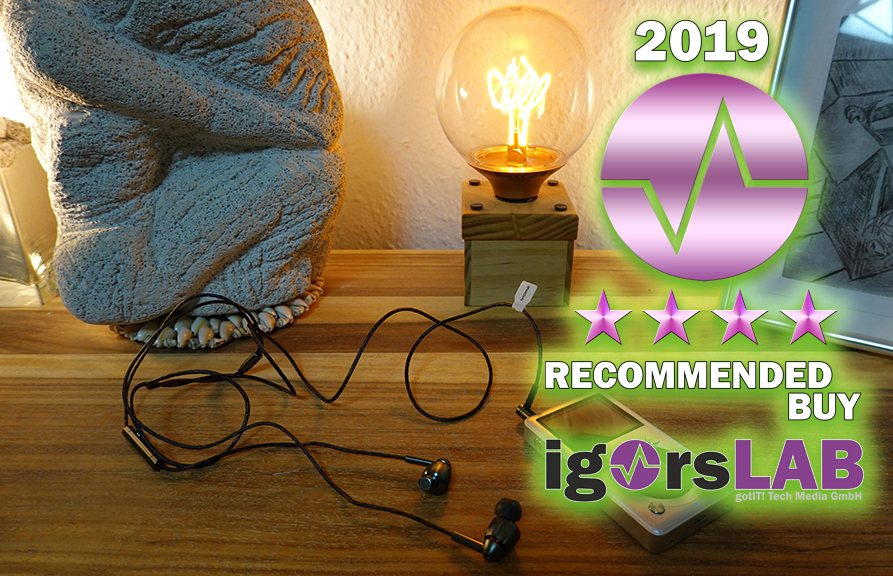 So you can definitely recommend the 1More Quad Driver, because for less than 120 Euro road price you have to find something better. Well, there will always be, but you have to make a real effort. And whether all the points really fit, it is not yet clear. Category "Can you like to buy" if you happen to be about 120 Euros and is on In-Ears. At least the parts have encouraged me to give them a real chance on the next long haul. Even if the Bose have ANC and the 1More do not. They can also conclude and exclude them. Even without electric chinkers.