The Crux with the Minor version of .NET The. NET-Framework now runs like a thread through help forums and grief boxes, although to Microsoft's relief we also want to note that many problems that arise are more likely to ...

Not new, but still up-to-date: .NET and rights confusion in the registry. After i already dealt very intensively with Windos 10 and compatibility problems in 2015, it is actually time to revise this piece of my own troubleshooting and republish it. As stupid as it may sound, nothing has changed. Only Skype has become almost unusable, but this is a completely different topic. 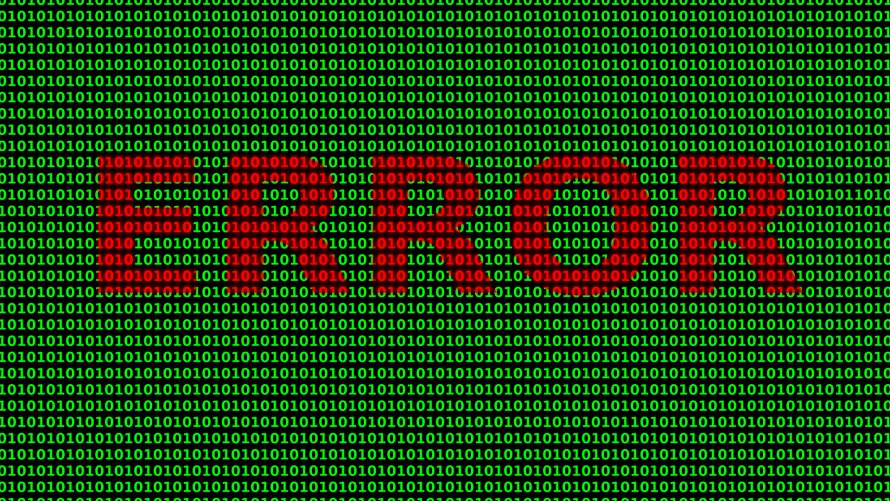 The Crux with the Minor version of .NET

The. NET framework now runs like a thread through help forums and grief boxes, although to Microsoft's relief we also want to note that many problems that arise are more likely to be due to the ignorance or negligence of the programmers. that are very superficial with the version queries.

Major version, minor version or build – some setup or program module can only feel bad with newer versions within the same major version.

Now it is not the case that this only applies to any forest and meadow programs, but also products of such well-known software manufacturers as Autodesk! For example, if you try to reinstall one of the language packs for AutoCAD 2015 or later on Windows 10, you will get this message and cancellation instead of installing it from the Microsoft Installer:

Now this applies not only to Autodesk, but also to many other programs. If you think you can simply download and install .NET 4.5, you will be very disappointed, because this setup reports that .NET 4.5 is already installed. It gets even more confusing when setup intelligently attempts to reload .NET during the installation process. If you are lucky, you will be rewarded with the cancellation of the program, the rest will end up in an endless loop.

The reason is simple: For example, while with .NET 3.5 the service pack later logs on with 3.5.1 – we remind you of the differences between major and minor version and build – Windows 10 simply uses a different minor version. This is how .NET 4.6 is used, which is theoretically backwards compatible. Stupid only if the in-program queries are stuck to 4.5 and only ignore the builds, but not the minor version.

Remedy by a registry hack

Important note: In the registry you should only make manual interventions if you a) know what you are doing and b) no other solution exists. The described here . NET issue will hopefully be fixed "regularly" soon with updates from individual software vendors. Until then, however, it is a remedy to get certain programs up and running at all or to be able to install them first.

Nothing is impossible, even if we have to go a little further here. We therefore describe the procedure step by step and also explain how to set permissions in such a way that one gets access to some keys and their values in the first place. But more, forced to do so. First we log in again as an administrator (if you are logged in as a restricted user) and only then we click with the right mouse button on the start button: 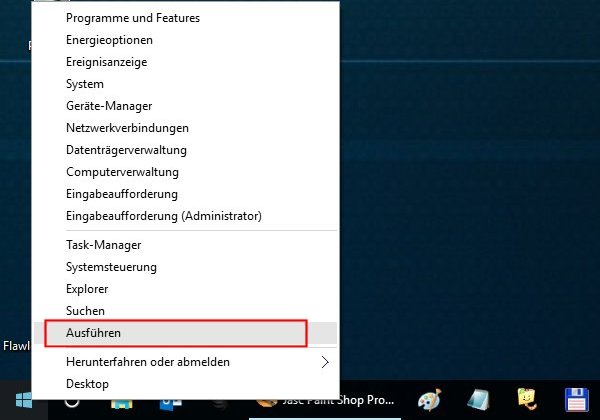 In the Registry Editor, we switch to the following key in the tree display, which displays the installer values of the currently existing . NET versions, which are used by many programs for querying:

The Client and Full keys hide the value that we need to change now. We also need to repeat the procedure described below for the Key Client for the Full key. What we see here is the reason for the evil, because the 4.6.xxxxx does not bring us any further.

But if you now think you can easily change this value, you will also reach your limits as an admin and get this error message:

Missing Rights and the TrustedInstaller

We don't want to get lost in detail, but only so much to understand: The Microsoft installer is also a kind of user as a service, but with full access rights that far exceed the rights of normal administs. If the so-called TrustedInstaller is the owner of this key, it cannot be changed without permission. Really not? We are now simply prying out this protection!

With a right-click on the key client (for Full we do it exactly like this), we open the pop-up menu and then select the menu item Permissions via left-click.

In the now opening window with the permissions, we don't stay long and click on Advanced. 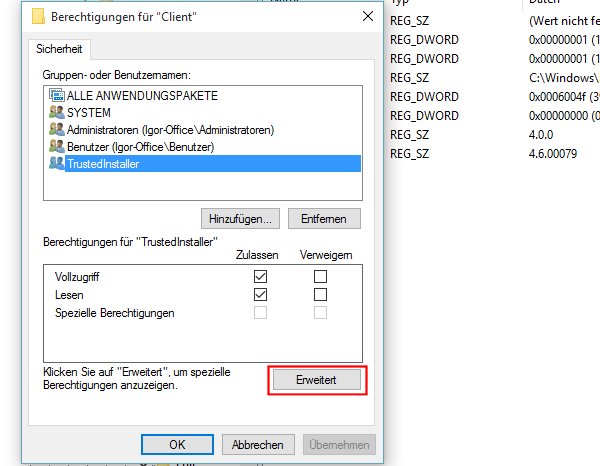 Who will see in the advanced security settings that the TrustedInstaller is the owner and has full control. Even we as admin are only allowed to read values. Of course we want to change this now and that's why we now also click on Change: 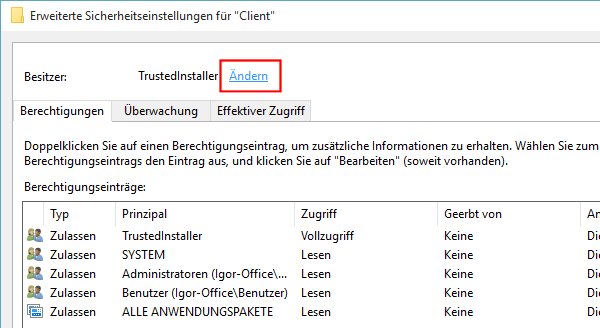 We search for the appropriate object (in this case all users with administrator rights) by typing the word Administrators in the text box (1) and then clicking Check Names (2).

We confirm the whole thing with OK and we are already a big step further.

So now we are the owners and no longer the TrustedInstaller. But we are still not completely finished with this, because we still do not have full rights. To do this, we must first confirm the owner change with OK, and then return to the previous window. 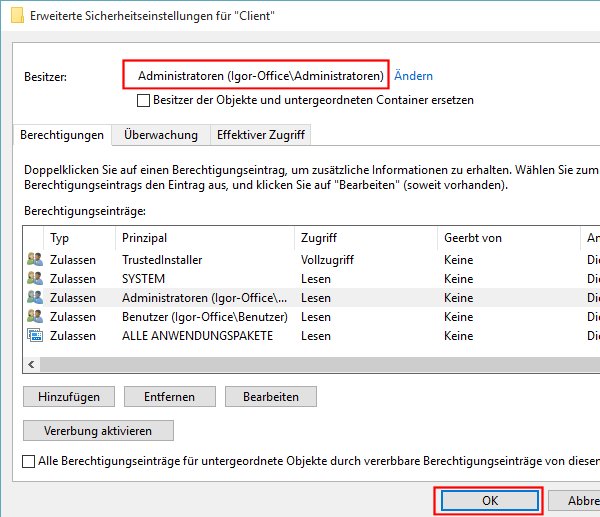 From the user collection, we now look for administrators and select the list entry. After that, the check mark has to be set in the Authorization field Full Control. We confirm with Take and/or OK and are almost finished. 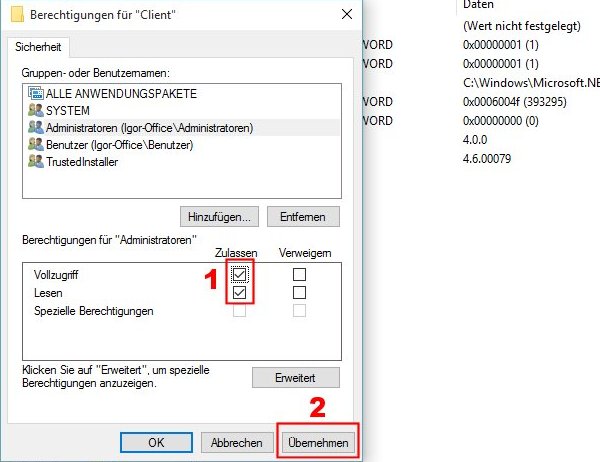 Now let's open the string value for version and edit it.

We'll just replace the six with a five and save that change with OK.

The result is now entered as hoped. We repeat the whole thing again for the key Full and can now install or use the desired software.

Restore to original and restore rights

In any case, it is recommended to set this version number back to the initial value by simply setting the value back to six as described above. We still have the necessary rights. However, this measure should also be reversed. So we repeat the whole steps for changing the owner, but then do not enter administrators, but the object name NT ServiceTrustedInstaller shown below, which you will not get listed by the search. 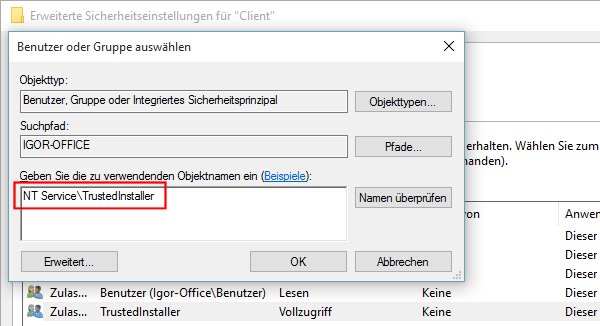 If you want to protect your own registry entries from nicknames and foreign programs, you can of course assign the owner TrustedInstaller to any key. All this is often helpful, but it is at your own risk.

Data recovery made easy: EaseUs Data Recovery Wizard Professional. We are giving away 5 licenses of the brand new full version! | Update
Forgotten Windows password? How to save your offline account and change your password in minutes | Practice