If there were enough Vega chips and thus a wide range of cards, the Gigabyte RX Vega64 in this form would probably be the ideal entry-level card, rather than a top-of-the-line model. But it really must always be the demonstration of what is technically feasible... Board layoutAs with the RX Vega56 Gaming OC, Gigabyte is extremely different from AMD's reference layout, which should also make the use of existing full-cover water coolers impossible. Also at the popular Raijintek Morpheus, the end of G... We have to put it in the first place that we actually had to double-benchmark all the games. At the last moment, Gigabyte incorporated AMD's new kernel from the source BIOS, which accommodates the custom models with a customized power table. D... Power consumption at different loadsThe power consumption in the gaming loop is at the measured approx. 261 watts in Balanced Mode about 20 watts below what could be measured at the reference in the default BIOS. This is all the more astonishing because... Overclocking and undervoltingThe conventional overclocking by means of an even higher power limit and more clock counteracts the current cooling concept, because the rather quiet cooler gets along quite well with what it has to dismount ex works. More on the other hand... Cooling system and backplateOf course, the generated waste heat is directly related to the recorded power, for which the cooling solution is responsible for optimum dissipation. And this is precisely where we are faced with various compromises, which are... SummaryFor the Gigabyte RX Vega56 Gaming OC we have already written a very detailed conclusion, which applies unreservedly to the bigger sister in the same forum. Butter-and-bread instead of lighthouse project and cost optimization for ...

If there were enough Vega chips and thus a wide range of cards, the Gigabyte RX Vega64 in this form would probably be the ideal entry-level card, rather than a top-of-the-line model. But does it really always have to be the demonstration of what is technically feasible?

Unlike Sapphire's heavyweight RX Vega64 Nitro+, the Gigabyte RX Vega64 Gaming OC, like its already tested smaller sister RX Vega 56 Gaming OC, is a fairly grey mouse with a healthy body-size index. Just don't stand out at all costs. And it almost seems as if it has even deliberately been designed to arouse as few desires as possible, so as not to trigger any demand.

From internal sources, we know that the AIB received only a few chips in amD's mid-four-digit range, most of them Vega64. The general scarcity of packages thus prevents real mass production at the moment, because one cannot constantly drive and shut down a production line or even have it paused for longer. Costs and effort would simply be too high.

The fact that we were still able to get a copy is not due to the above-average capabilities of German importers, especially since, according to internal information, only cards in the double-digit range were available here, but on a certain Self-initiative in self-importing (including taxes). The two counter-rotating fans with a rotor blade diameter of 9.5 cm each sit in an opening with a diameter of 10 cm. A total of 11 rotor blades per fan, with their special shape, mainly provide airflow and turbulence and less static pressure. This should be helpful to the cooling concept.

The backplate dispenses with the Aorus logo, which still featured on the pre-production model. The copper insert, which sits above the back of the package, thermally separates the backplate used for cooling from this area and also cools – a little. The integrated heatpipe is not (yet) seen here on these pictures. More on that later. 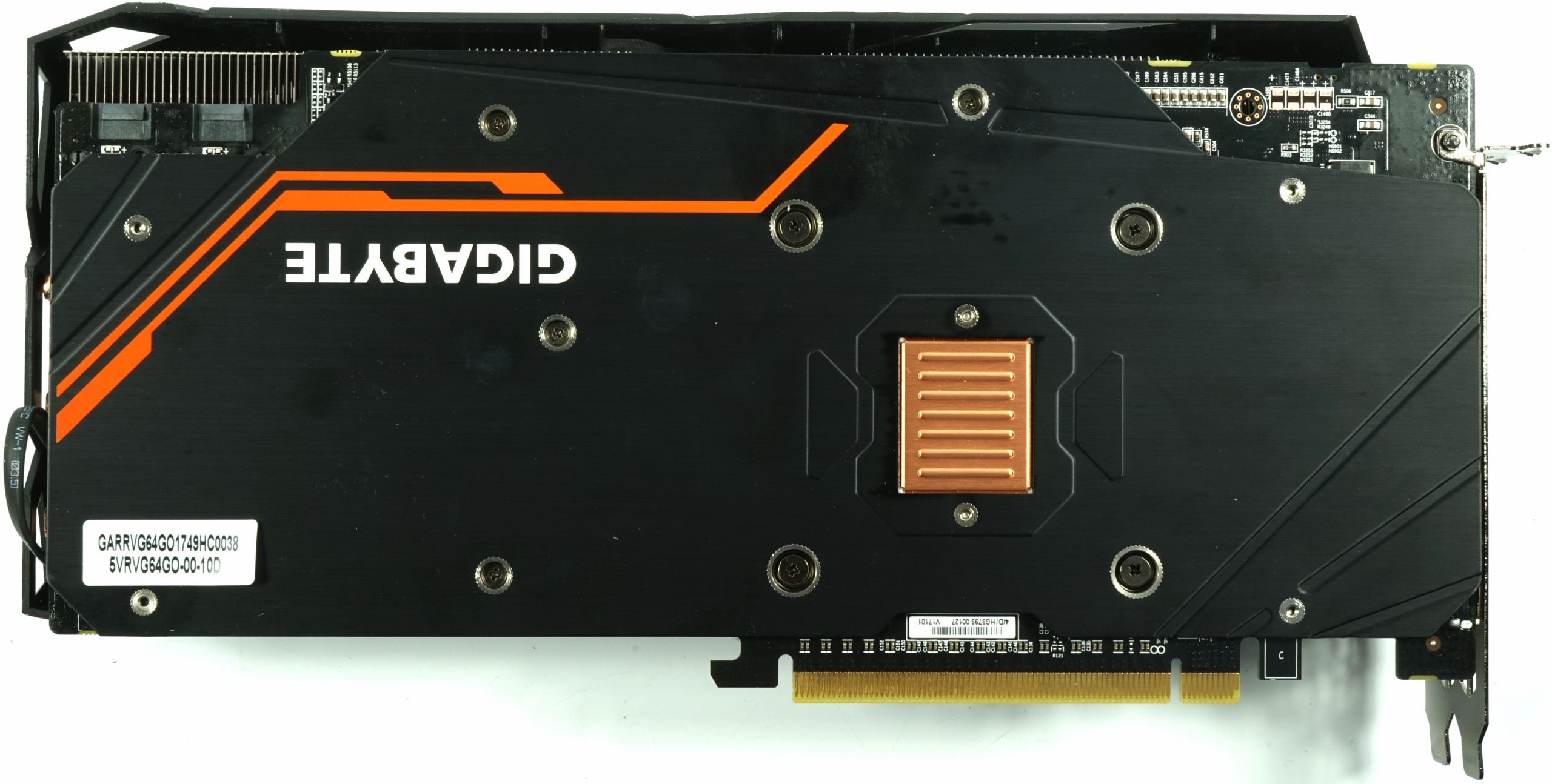 It is already clear at the bottom of the card that Gigabyte has also worked a little on the shape of the vertically arranged slats. Due to the inclination and the waveform, the airflow should cool more efficiently. We will be questioning this at a later stage.

The top also clearly shows that Gigabyte has deliberately set the red pencil. No RGB effects and other LED playstuffs, but a somewhat jagged plastic desert of injection molding and printed orange color accents. The white gigabyte logo is also only printed. In addition, gigabytes of two 8-pin sockets are sufficient for external power supply.

The closed end of the card shows not much except the end of the two 8 mm and three 6 mm heatpipes, but only the connection cable of the fans. Other possible sockets were provided on the board (e.g. RGB output), which has been omitted in the course of development. 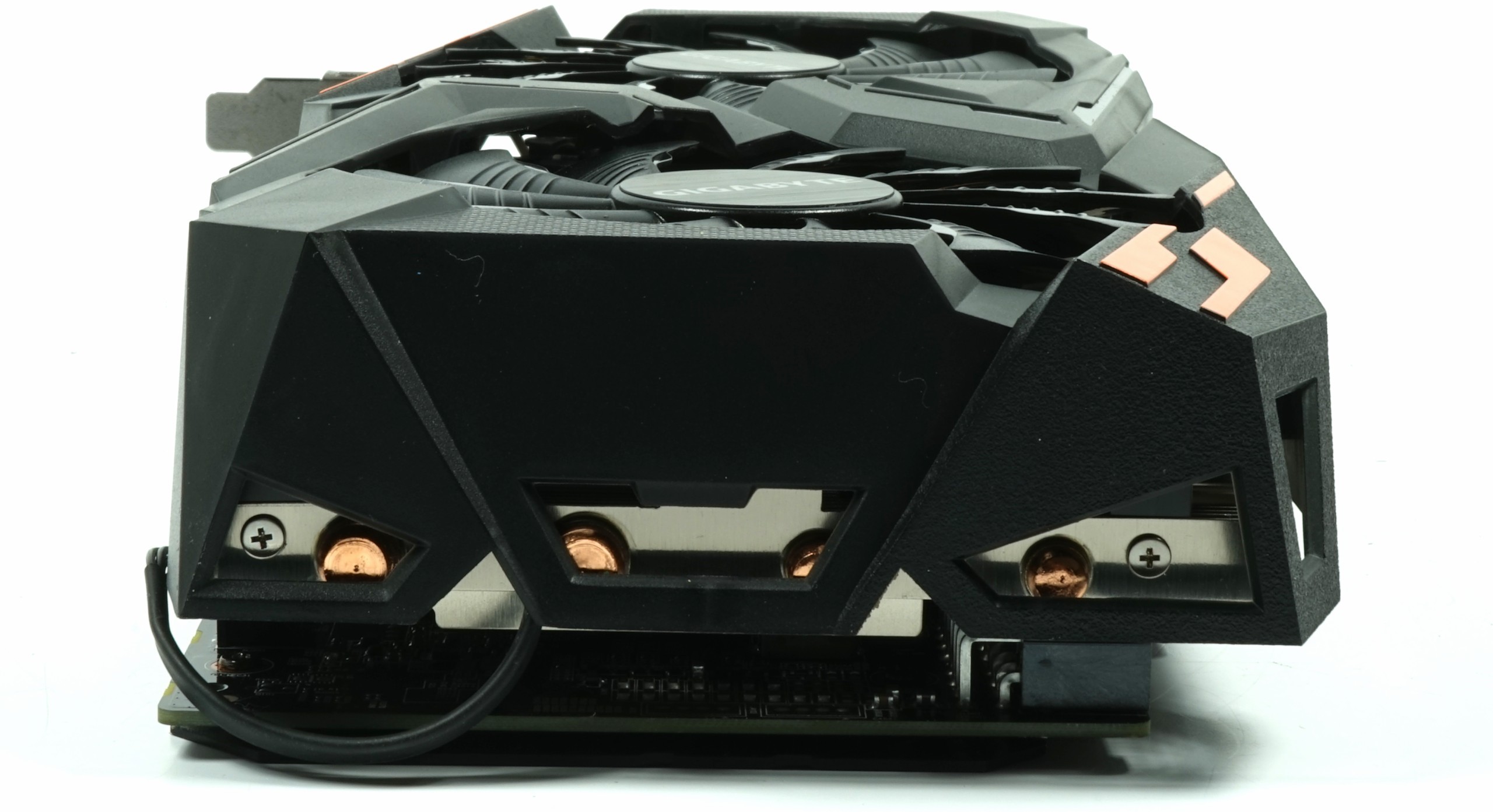 The slot panel is very interesting in that it has six instead of the five connectors of the reference card. Three HDMI 2.0 ports and three DisplayPorts 1.4 are available to the user. This makes the card suitable for connecting up to six monitors in eyefinity mode. 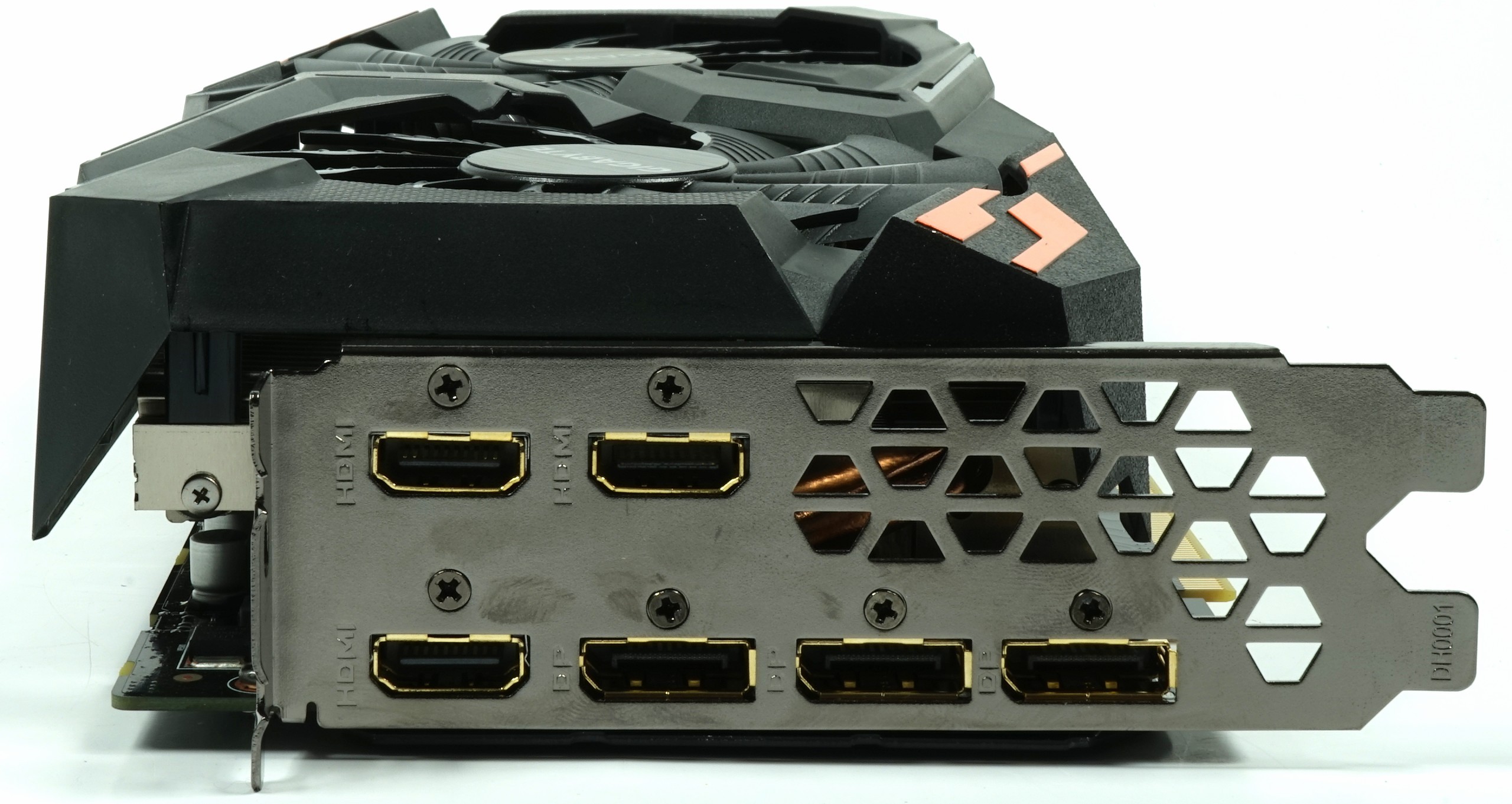 Finally, let us take a first look at the technical data. The value displayed as the maximum boost clock, on the other hand, is rather a wishful thinking, which is unlikely to be achieved within the set power limit or at all. 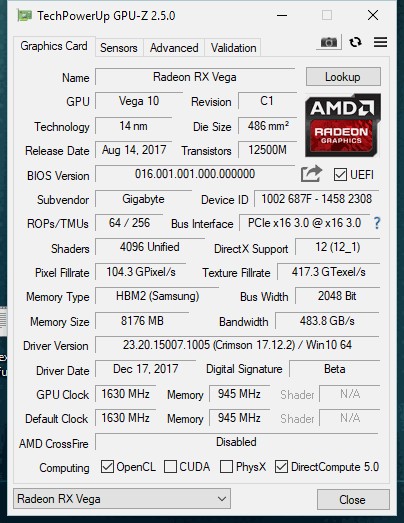