The discussions about what current flow various 6-, 8- or now even 12-pin sockets can survive are as old as these sockets themselves. But while over the years one could see the odd experiment or two, the 12-pin Micro-Fit 3.0 connector is new. This in turn naturally aroused human curiosity and this is exactly where my longtime friend Aris Mpitziopoulos comes in, or rather his laboratory. With Aris I am not only connected to the long lasting cooperation with my previous publisher, but also to the lively exchange of ideas on various projects, which are perhaps not (yet) in the public eye.

So it is surely obvious to introduce him and his projects Cybenetic and Powenetics in more detail, whereas you should take a closer look at Powenetics, because actually you already know the principle from my shunt measurement setup, which by the way doesn’t look like it looks like by chance. But we don’t want to digress and today we will first address the question: How many watts (or more precisely amperes) will it survive a 12-pin construction before the potential core meltdown? Or maybe not, but that is exactly what Aris found out.

So, that’s my friend Aris on the picture and a pretty massive 12-pin PSU cable with the idea to test this connector thoroughly. The equipment for this is available in Aris’ laboratory, the cable itself comes from Seasonic and has already been described in detail by the media. 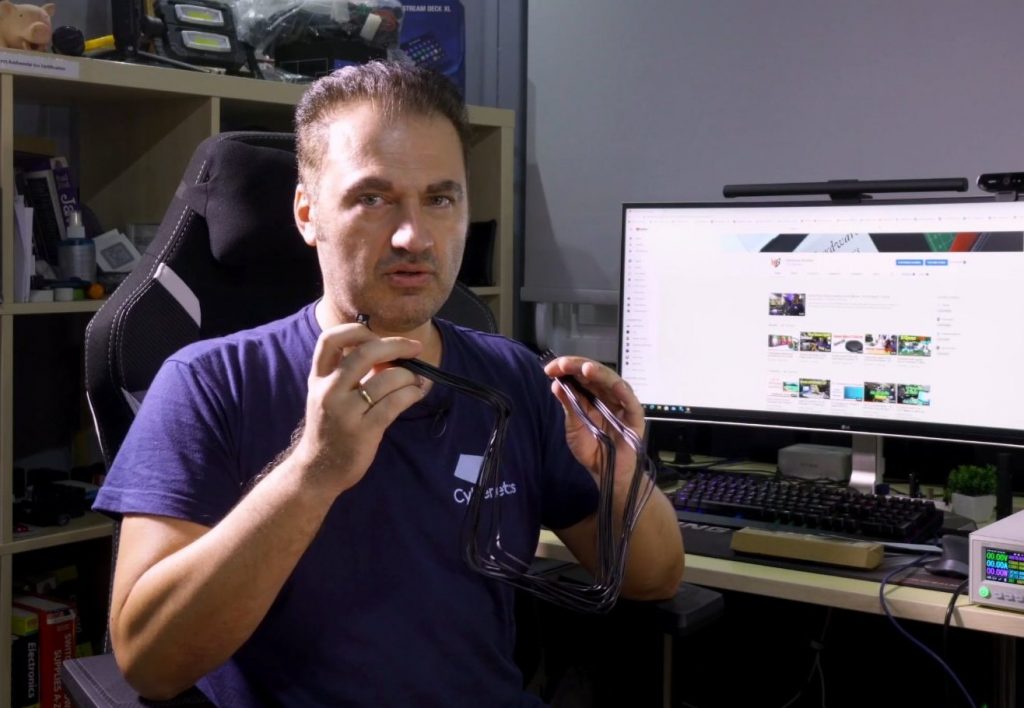 I already wrote that Seasonic used a really thick cable here, which also brings a lot of weight (and copper) in the finished version. Who burns up first? The solid AWG16 cable or the socket and plug?  According to the specification it is 9 amps per rail and thus with 6 live lines 54 amps or 648 watts in total.

For the measurement setup Aris uses appropriate resistors, exactly one for each rail. These are 150-watt models, which may seem a bit borderline, but due to the mounting with coolers on two large extruded aluminum plates, they can tolerate even more, as long as the experiment does not last for hours. Hot air is therefore already provided for once. 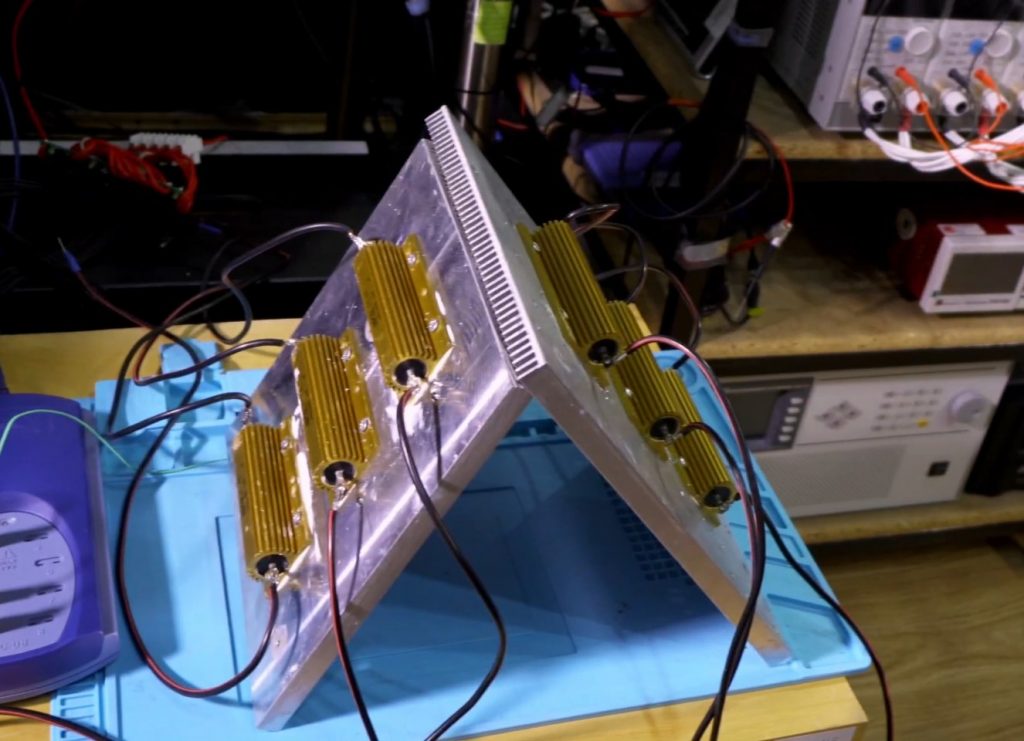 Of course, the whole thing must be connected and wired. And so, the Seasonic cable comes to a special circuit board on the other side, which in fact simulates a modular power supply unit that accommodates the two 8-pin connectors of the Seasonic cable. 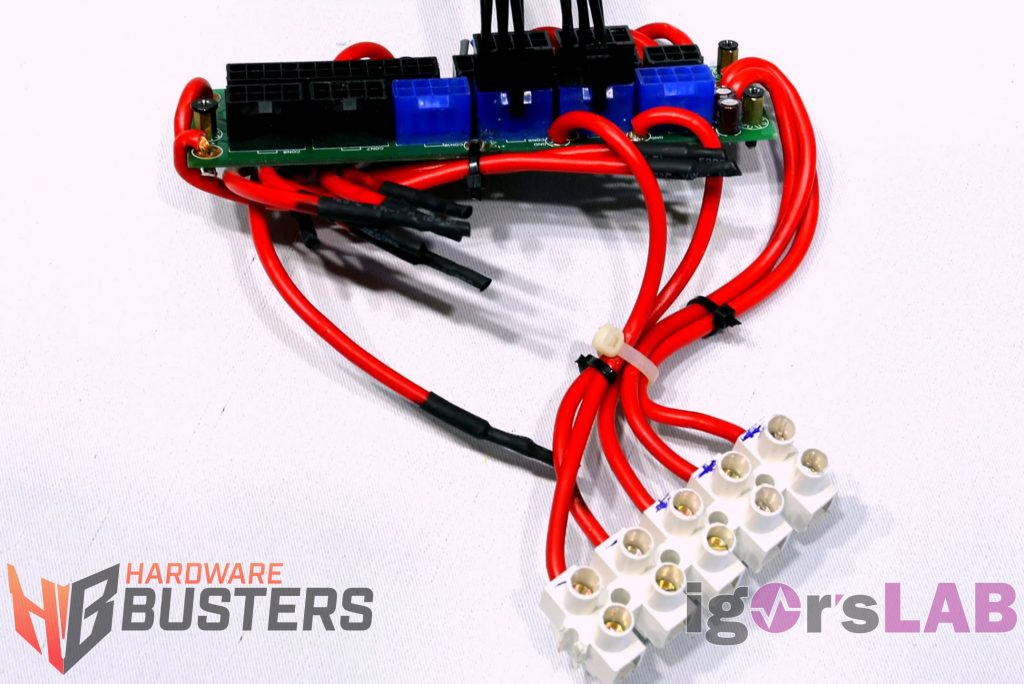 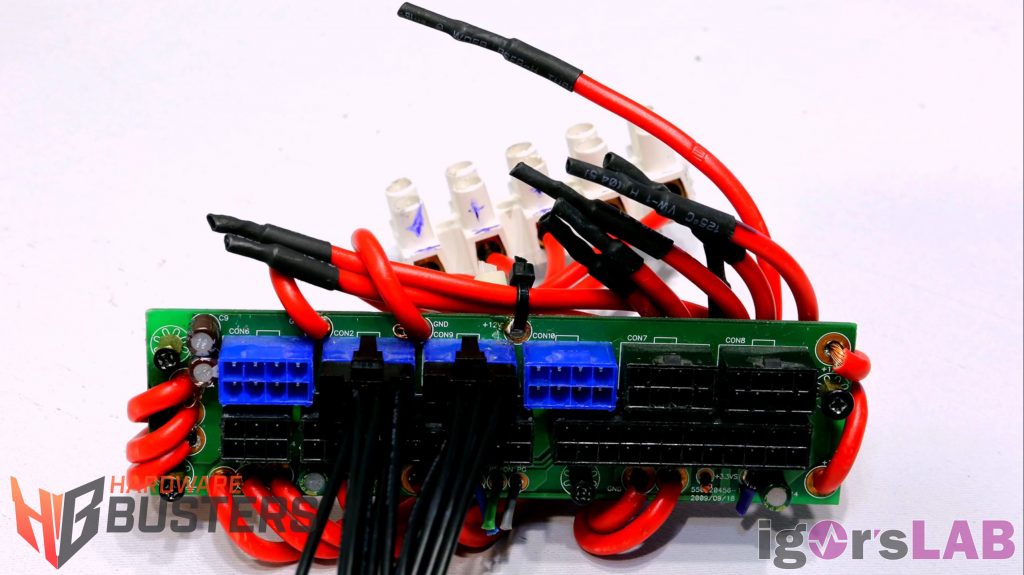 For the measurement, calibrated K-sensors are used, because the small Flir is a nice tool for the superficial inspection of various cable and contact surfaces, but unfortunately, you cannot measure anything in the sockets themselves. After all, what is primarily of interest are the plug contacts of the socket and the plug as such. The rest are interesting superficialities. 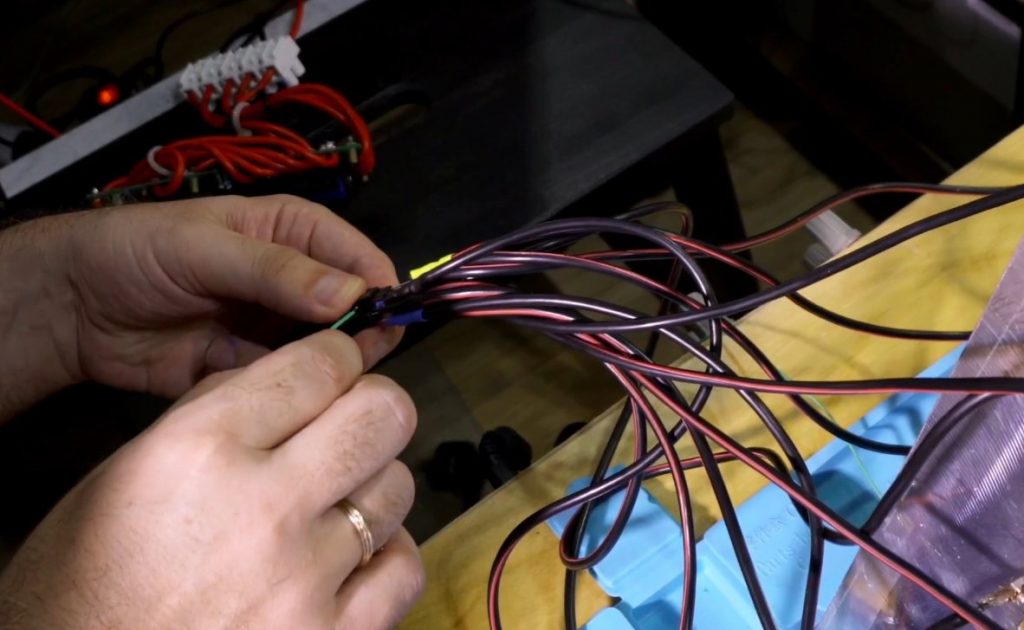 Now the whole story gets power and we are curious. A first experiment had shown that the 650 watts of power offered were manageable, so a little bit more is on top. The laboratory power supply now delivers a whopping 63 amps on 12 volts, an impressive 756 watts! Exactly this is now programmed and delivered stable for the test! 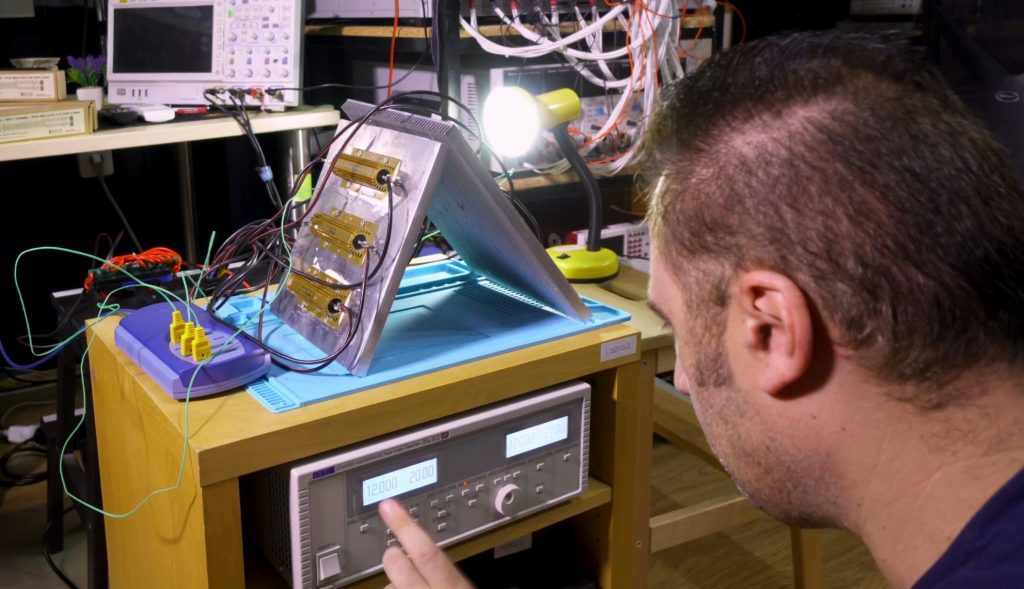 Let’s start the experiment. The 12-pin connector (blue) is at a good 60 °C after just a few seconds, the both other sensors are still in the wake-up phase at a moderate 34 to 37 °C. 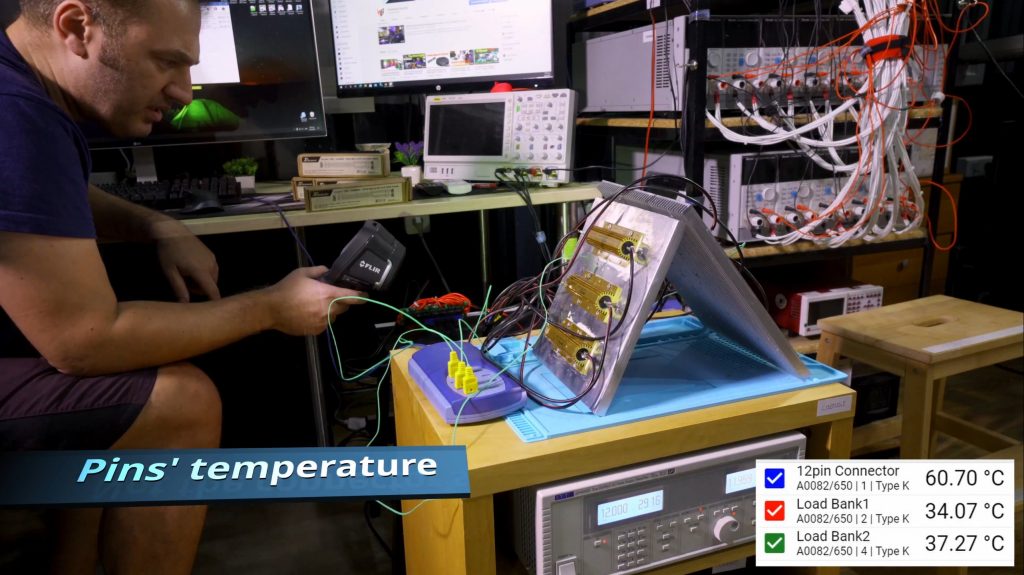 After a few minutes, we are already at 120 °C for the 12-pin connectors, while the both others are at 51 and 61 °C respectively. The cables above the connection are, by the way, according to Flir, already at 200°C and higher! 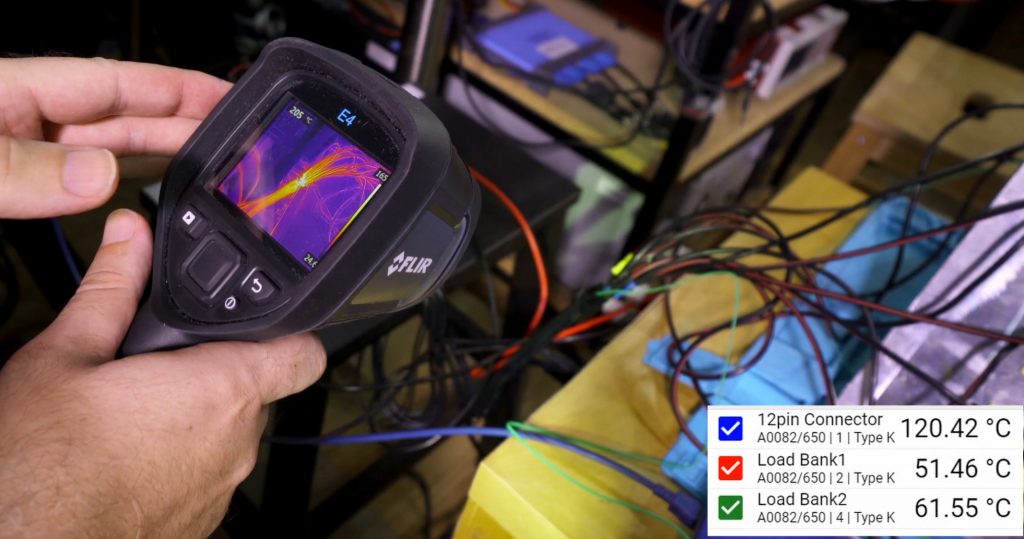 The following thermography shows once again all the measuring points on the connector an cables, whereby the connector itself was not at risk even at 144 °C. The material can barely withstand this, but what you can smell is the sheathing of the cables, which are already extremely affected by the 280 °C. Flashpoint? You’d have to ask Seasonic. Nothing is charred or dripped off yet, which speaks for the quality of the individual cables and the sheathing. But this is always borderline. And please, don’t imitate him! 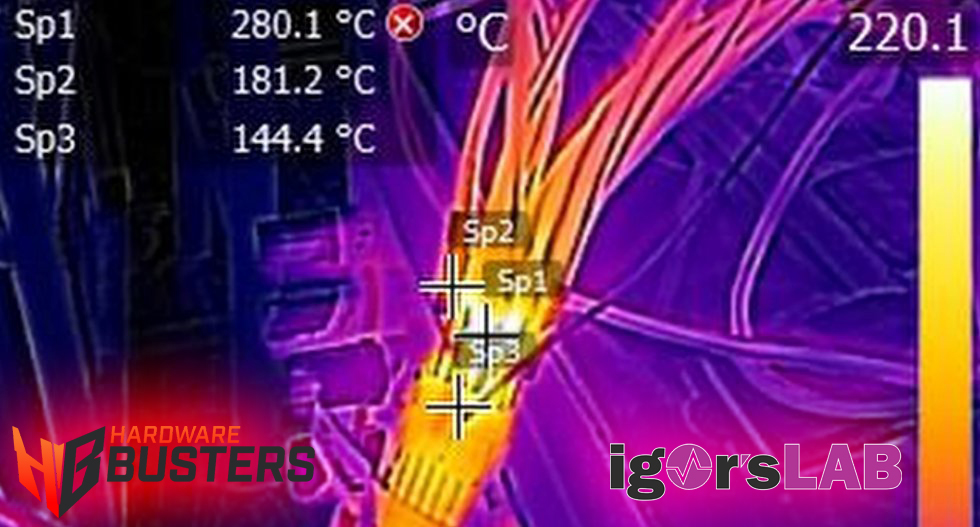 This is a good thing for the coming winter and you should not touch the resistors. And whoever is wondering about the yellow fingernails now, Aris is also a little joker (ok, it was his wife). 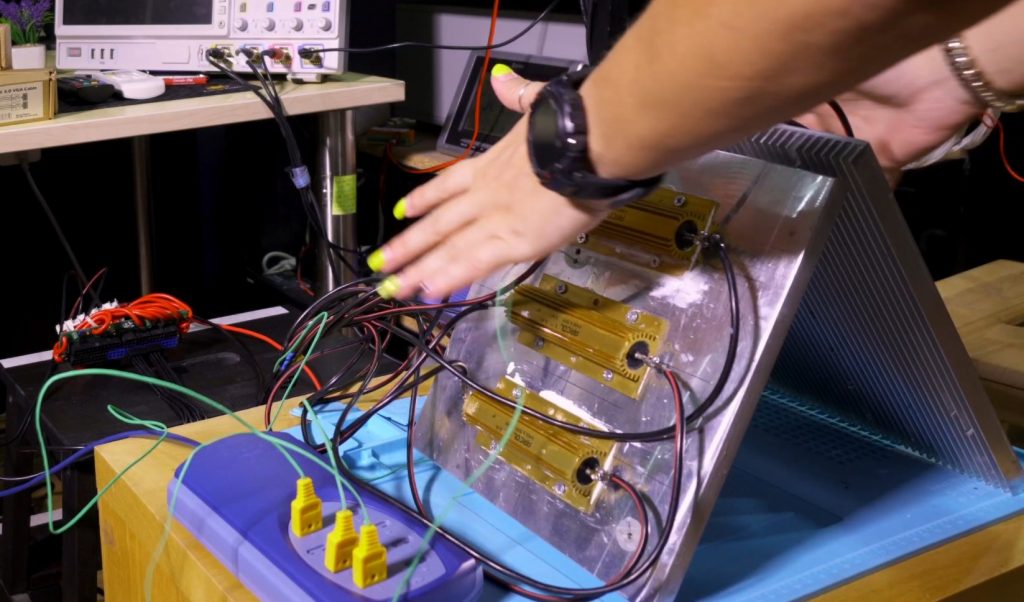 Let us now look again at the logged temperature measurement processes. The blue curve is the probe in the connector, which is pretty much the same as the IR values, the other two curves are both other sensors in the bank, which never got hotter than 90 °C. 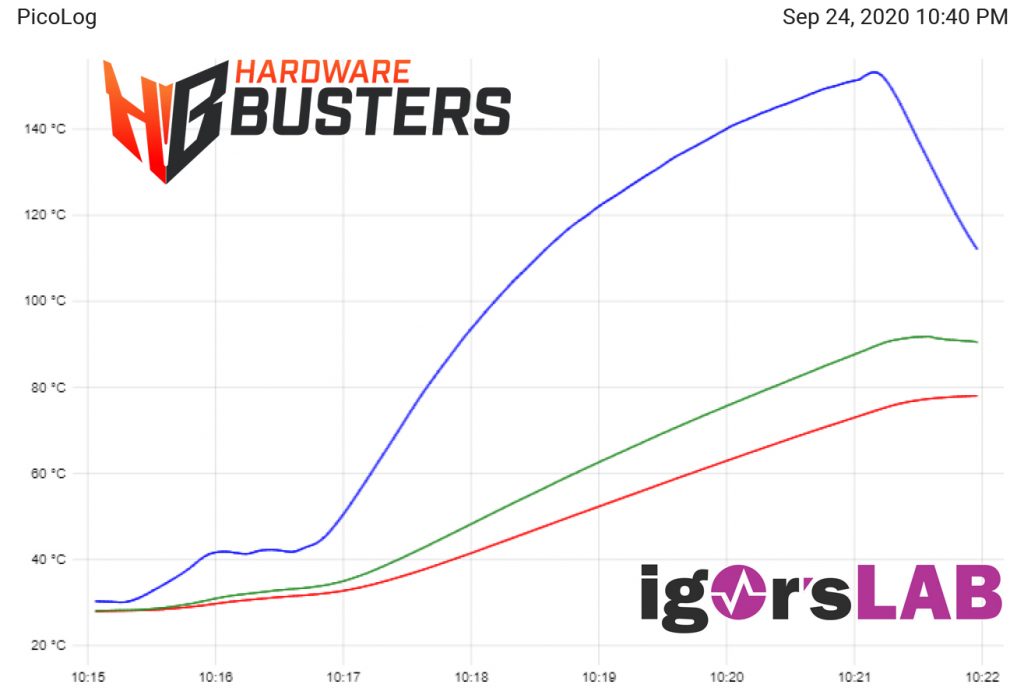 Firstly, the 12-pin connector with the Micro-Fit 3.0 is extremely powerful and would easily survive the 750-watt bomb in a period of maybe 10 minutes at most. Secondly, the suitability for OC experiments up to 450 watts would be well proven. As a result, NVIDIA’s design stunt with the 12-pin Micro-Fit connector is anything but risky. So everything works as planned. Thus also all-clear for all fear hares and naysayers.

What we saw by the way: the two 8-pin plugs, where only 3 contacts are responsible for the current flow at the end and not four, manage the 750 watts with a true gesture of nonchalance, so that the 400 watts per 6+2 connector measured before can be completely confirmed. As long as you don’t use chinese firecracker PSUs with twisted thin cords, you are still on the safe side with the 12-pin or 2x 6+2 pin, even with the big Ampere cards.

Finally, I’d like to do some advertising for Aris’ project and his YouTube channel, which by the way is now a partner channel of mine. So much time (and honour) has to be left at the end and maybe he will get a small subscription for his years of very enlightening work extra. I’d let him have it. We also have many exciting ideas and so synergies can develop, the results of which you can look forward to in the future. So much for today from the lab, because life goes on. Even without cables and lots of electricity.

NVIDIA GeForce RTX 3070 launch postponed to October 29th – one day after AMD's presentation of the Radeon RX 6000 | Editorial
"RTX on" from an AMD user’s perspective and "is Turing really dead now?"