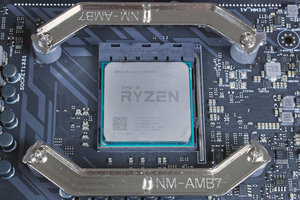 AMD's problems began in 2011 with the launch and at best mixed tests of its bulldozer architecture. In the years that followed, AMD tried to stop the descent with Piledriver, Steamroller and – but it is safe to say that the manufacturer Excavator never shone again in the glory of the glorious old days.

Meanwhile, Intel dominated the mobile, desktop, and server markets with the seemingly indomitable performance of its excellent Sandy Bridge design and a steady cadence of incremental improvements.

Unfortunately, however, the increase in performance was lower with each new generation; new, disruptive technologies shone through absence. The cancellation of Intel's tick-tock cycle also signals that the days of "simple" performance gains are over.

In direct comparison, AMD was far behind; I don't think anyone will seriously dispute that. But that would of course make a comeback even more impressive, wouldn't it? Because, optimistically, the backlog simply means much more room for significant improvement.

Zen also promises to breathe new life into aging platforms with the AM4 socket, new core logic, and advanced features – and AMD claims to have a clear direction in mind for future Zen generations.

AMD seems to be on the warpath: Ryzen is about to shake up the market and end "incrementalism" – and given its pricing, the manufacturer certainly wants to make this announcement come true: the ryzen processor's flagship offers the same Number of cores such as Intel's Broadwell E flagship Core i7-6900K, but costs only half.

The combination of price and hype, along with a few carefully selected AMD benchmarks, caused pre-orders for the processors to explode, even though – until now – there were no neutral test reports.

Now it's time for Ryzen to stand on his own two feet and show us what it's all about in the real world. According to AMDs, the glory days of the competitive CPU market are back – and now we have the hardware in our global labs to make that claim. We have already identified a number of areas for further investigation and will update our reporting if new information emerges. But we still decided to publish this launch article (after all, the processors are available from today) so that interesting people can make reasonably informed decisions.

It all starts with the core. Four years ago, AMD began working on the Zen core – the first new architecture since Bulldozer. AMD's first goal was to move from 28 nm process technology to GlobalFoundrie's 14 nm FinFET process, which allows for improved density and performance with comparable energy uptake.

AMD also set itself the ambitious goal of increasing IPC performance (Instructions Per Clock) by a whopping 40 percent compared to Excavators through a series of architectural design decisions that are expected to significantly increase performance. Once again, AMD has simultaneously implemented a new microarchitecture and a new lithography process, which is a huge task.

In addition to many other architectural enhancements, the company has also integrated a micro-op cache to bypass the L1 and L2 caches for commonly used microoperations. AMD also wants to improve the Branch Prediction Engine, increase the Instruction Scheduler window by 1.75 times, and increase L1 and L2 cache performance nearly 2 x.

In the end result, AMD even wants to exceed its target of 40 percent IPC performance growth and now officially gives a whopping 52 percent. Apparently, the new microarchitecture allows for a decent power boost – according to AMD, under certain circumstances, an additional output of up to 76 percent is included.

But at this point, it's worth remembering that this information refers to AMD's previous generations, not Intel's latest processors.

AMD divides Ryzen into the R7 (eight cores), R5 (six cores) and R3 families (four cores). Currently, AMD only delivers the R7 family, but you don't need a diploma to see that AMD is already targeting Intel's Core i7, i5, and i3 model series by name. However, AMD's new processors offer more cores and lower prices through the bank. The Kaby Lake family's dual and quad-core CPUs are cheaper, but have only half as many cores.

AMD also has a proprietary SenseMI suite with a number of features that we'll discuss here. XFR (eXtended Frequency Range) is certainly the most notable feature because it is not enabled on all Ryzen processors. XFR automatically increases performance beyond the predefined base and Precision Boost clock frequency (analogous to Intel's Turbo Boost) by giving the processor more thermal leeway with an aggressive cooling solution. However, XFR only boosts a single core. The XFR feature is enabled on all "X" models.

AMD's current flagship models do not bring a GPU, although it will be integrated with various future processors. Instead, AMD decided to use the extra silicon for the cores. All three current Ryzen R7 processors —1800X, 1700X, and 1700—need the AM4 platform (more on that soon), have eight cores, and can handle 16 threads in parallel. In addition, there is a total of 20 megabytes of cache (4 MByte L2 and 16 MByte L3). All Ryzen chips come with unlocked multiplier, but you need a board with X370, B350 or X300 chipset to use.

And if that's not impressive enough, the price should make every enthusiast sabby. AMD is positioning its high-end chip against Intel's 1050-dollar 8-core Core i7-6900K processor – but the 1800X is on sale at a list price of 499 dollars. Half the price of a comparable Broadwell-E is quite an announcement. The cost benefits for the rest of the Ryzen family aren't quite as extreme, but they do exist.

AMD has aligned its pricing model to address the broad mass of the market. According to AMD, 99 percent of buyers use a processor under 500 dollars. High-end tacting is exciting, and if AMD's performance promises come true, it sets the stage for an exciting reordering in the popular middle and entry classes.

But let's see if AMD gets the start well.